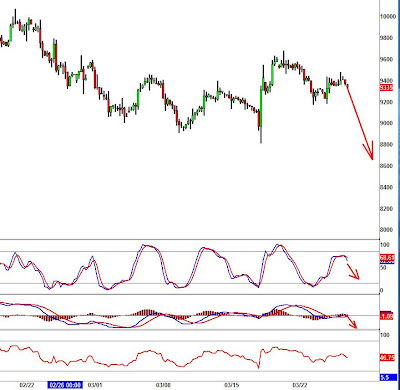 Nothing new on gold other than it probably finished a correction and is headed lower. The above 4 hour chart shows the momentum indicators crossing down now with plenty of room to run. Plus, gold fell hard right at the close of the US session today which often has signaled weakness in the day(s) to follow. 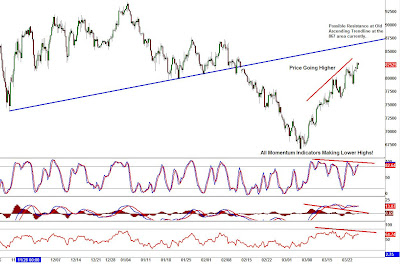 The market continued to push higher today, led by the Nasdaqs and tech. The financials, best tracked by the XLF, failed to make any real progress upward today except for a surge in the last 20 minutes of trading. The momentum indicators show this rally becoming very exhausted and either being held up by hope, or an artifical buying spree, or both. I believe it's both, and when it's over and people realize they can't push the market higher, it will collapse. As reported by CNBC, the quarter is coming to end in a few trading days so big shots are loading up their books with stocks to mark them down for the quarter. I feel once this has ended, perhaps April 1st, the big correction I've been waiting for will come to be. So that's a time estimation for the big correction downward, the price target is the 867 area for a top because it's the underside of an ascending trendline established months ago. So in an educated guess essentially, I can see the S&P futures possibly rallying until April 1st to the 867 area.

As you can see from the 6 hour S&P futures chart above, all three momentum indicators below are making lower lows while price continues higher and higher. This creates a rubber band effect. Sure, the market can continue higher for days or weeks, but until that rubberband is released, it creates a lot of tension on it and when it snaps, it will shoot this market down hard.

Because I know the larger trend is up and this market may rally for the next few days, I do not want to sit on a large equity position. So I'm using put option spreads to short the market at high leverage and minimum risk. This way I risk exaclty the amount of capital I'm will to lose on this short trade, and all I have to do is have the market fall before my option expiration date.

I'm also heavily short the XLF which is the ETF for the financial industry. It looks extremely bearish and definitely in its last throws of its rally. I can't rule out one more sharp pop rally, but it should be quickly reversed and lead to heavy selling which should take the rest of the market down. 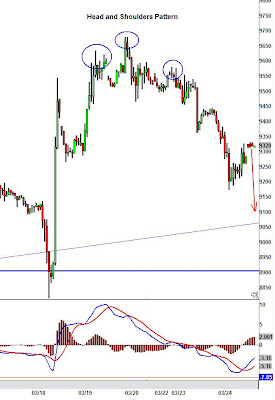 Just to update the short gold trade from the post on March 21st below; the head and shoulders pattern proved a great indicator for the bearish potential that came about (see above updated gold chart). Gold has sold off nicely this week and I expect it to continue. It's time to move my position to have the stop losses at break even in the $955 area. Now I can just sit back and let the trade run. I expect gold to get to $880 at least, in about a week or two.

FYI - I don't always post updates here if nothing significant or new has happened in the markets. I don't see a point to post "nothing has changed", or "waiting". I've beeen waiting for the stock market to show signs of top, which I got wrong a few days ago, so I've been on the sidelines essentially. Now I see a stock market top and gold has moved significantly in my favor so I'm posting an update. 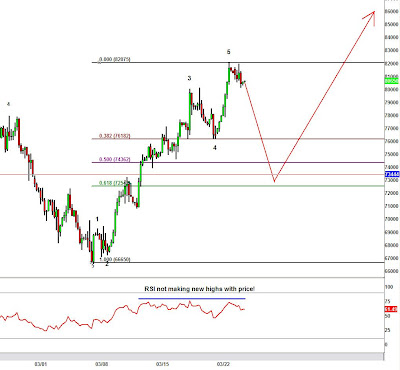 The strength of this rally sends a strong signal to me that this market has formed a bottom that should last for months, or more. For that reason, it's time to start trying to get long this market. However, the market appears severely overbought, and momentum indicators are not confirming the new price highs and are dragging downward on the larger time frames. You can see on my 4hr S&P futures chart above that even the RSI has failed to make any significant new highs since the S&P hit the 760 level. So that's about 60 S&P points uncomfirmed by the RSI. This is very bearish. Plus, with the amount of progess this market has moved upward in such a short period of time, some pullback and profit taking is due. The financials (XLF) has been leading this market up and down, actually brokedown at the close today and closed down almost 5% on the day. It made new lows and declined impulsively. So the short term trend appears to be down for the financials and they should drag the entire stock market down with it.

Key target areas for this decline are the fibonacci 38% retracement level and prior 4th wave area at 761, which should prove to be formidable support, as well as the 743 and 725 levels. I am mildly short the market right now but will quickly move to start establishing bullish positions once the S&P gets into the 760 area.

So, to sum up, the market appears to have formed a significant bottom and I'll be looking to get heavily long once this market pulls back enough to releive these overbought indicators. In the very short term, the market looks bearish and should take it down to the 760 level. From there I will start shifting from a short bias to big long bias.
No comments:

Gold sold off near the close of today's US session and should mark the beginning of a significant decline to at least the $880 level. The stock market obviously did not decline like I thought it would but today's fierce rally was on strong breadth and technicals which strongly suggests that this market has formed a significant bottom (S&P 666 cash) and is in a major rally phase. It's too late to chase this rally on the long side so I'll wait for some significant pull back to get in long.
No comments:
Newer Posts Older Posts Home
Subscribe to: Posts (Atom)