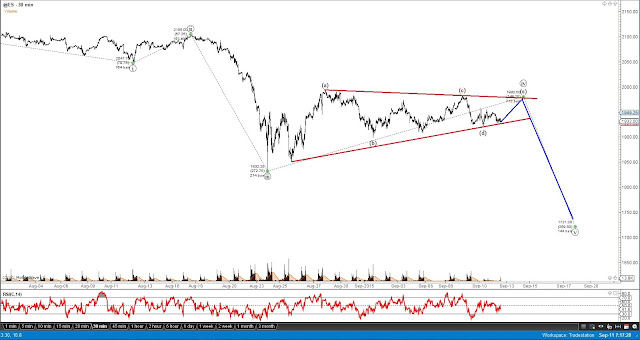 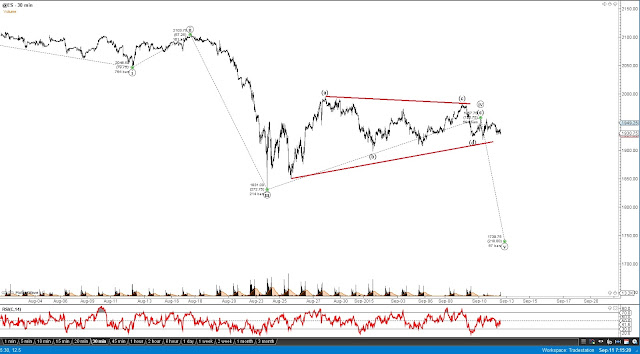 The S&Ps continue to consolidate and wrap up a triangle.  Although not ideal, and enough to make an EWP purist pull their hair out, the above triangle patterns are valid.  Don't get too caught up in technical rules and guidelines at this point, the important element here is that the market is not rallying impulsively off the lows on the year and it is moving sideways after a large move down.  Triangle, or consolidations, are simply pauses in the preceding trend.  In this case, the preceding trend was down, and hard.  So the market will thrust lower to new lows on the year once this consolidation is over.

Wave E finishes triangles and they are usually the result of a news event.  Next week we have CPI, Retail Sales, and some FOMC stuff later in the week.  Since it's Friday today, and we're ending the triangle pattern, it's quite possible we'll just chop sideways all day today, and possibly Monday until we get that news event for a sharp pop and then massive reversal lower.  But keep in mind, the news event doesn't have to be a scheduled event, it could be anything...something can happen in China, Europe, or also in the US that's unexpected.

The bottom line is that I'm positioning myself for a sharp thrust to new lows on the year, which should occur within a week or two. 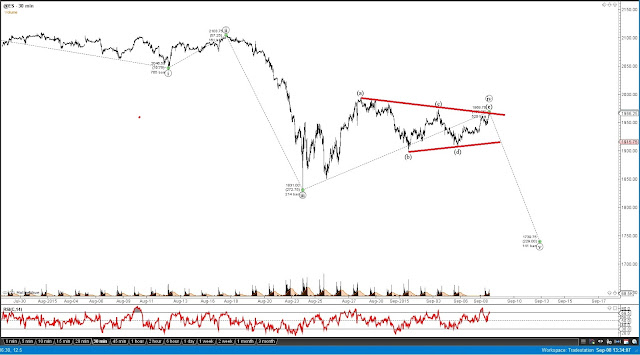 Boy was I wrong in calling for immediate selling this morning.  It appears there is a 4th wave triangle forming, and should be at an end.  The "right looks" fits well with the above count if you compare wave ((ii)) to wave ((iv)) now as they both took up a lot of time.  If the count is correct, waves (c) and especially (a) of the triangle cannot be breached (with the exception of overnight trading in futures as there is light volume and I would not use that to negate a triangle.

If the 4th wave triangle is correct, massive selling should get underway tomorrow almost immediately. 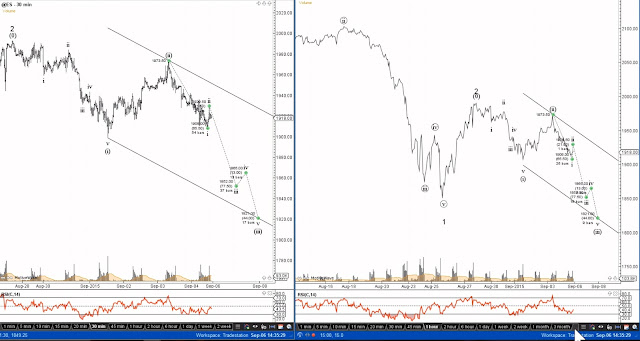 The chart on the left has OHLC bars and the chart on the right just using closing levels.  From an EWP standpoint, the sub-components of Minor wave 1 make more sense when analyzed on a closing bases (right chart).  But normally, I want to use OHLC bars to analyze wave counts so I'm tracking the short term action on OHLC bars (left).

The market declined as expected on Friday after the jobs numbers came out.  The sharp rally in the last few minutes of trading Friday was most likely short covering from folks who did not want to stay short over a long weekend.  But I highly doubt it was any meaningful buying .  As a result, selling should resume, and do so heavily, on Monday.  Because of that, I used the late rally Friday afternoon to get more short.  The wave count shows the S&P futures in a wave (iii) of 3 right now which means heavy relentless selling should rule the day in the foreseeable future.