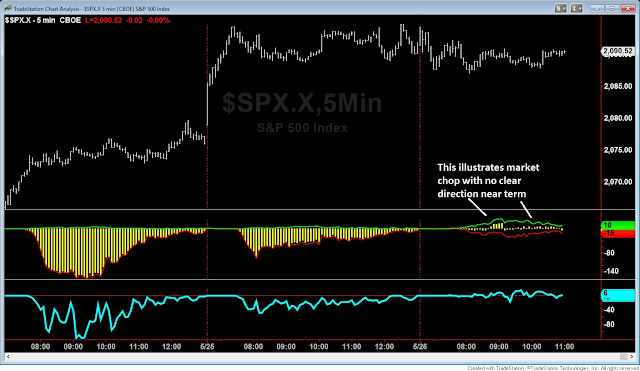 I wanted to give a quick update based on my post yesterday since I called for a sharp decline soon. The sideways chop in price action and the overbought/oversold indicator showing even on both sides tells me we are probably in a 4th wave. If so, a sharp and quick move higher should end the rally from the past few days to complete the 5th wave higher, and then lead to a sharp reversal of 30 or more S&P points.


PLEASE NOTE: THIS IS AN ELLIOTT WAVE BLOG EXPRESSING AN OPINION AND IN NO WAY GUARANTEES OR IMPLIES ANY PROFIT OR GAIN. TRADE AT YOUR OWN RISK.
No comments: Links to this post 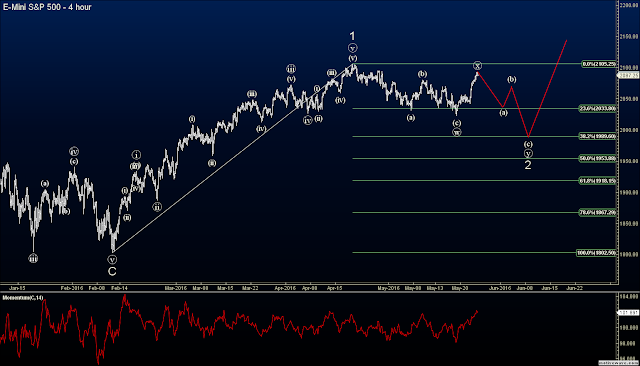 The S&Ps have been a mess to trade and count outside of day trading small time frame intraday charts.  My primary count now has a Minor 1 completed, with the choppy overlapping decline the past few weeks as an (a)(b)(c) leg of wave ((w)) within a combination correction.  The reason I feel this correction will unfold as a combination is that it is very sideways and choppy, which is not consistent with a completed 2nd wave (for Minor wave 2).  2nd waves tend to be sharp, and deep, not sideways and choppy.  Plus, wave ((x)) higher has unfolded in 3 waves which completed at today's close.  As you'll see later in this post, my proprietary indicators suggest a sharp move lower is coming very soon, so this outlook also fits nicely in this count as the market needs to decline very soon in wave ((y)) of 2. 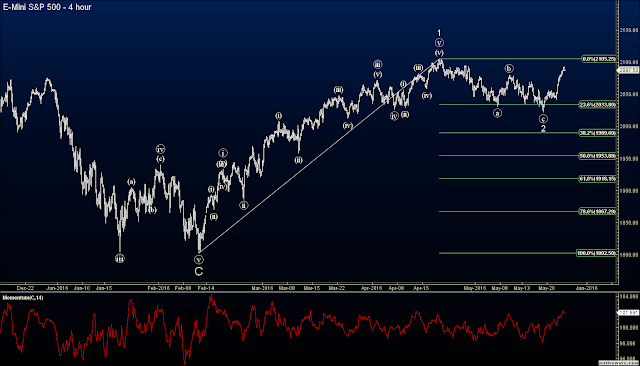 The alternate count is certainly viable, although more unlikely in my view.  This count suggests a Minor wave 3 up is just getting started yet momentum indicators are already at, or near, overbought levels.  Also add the characteristics of this decline and it is not indicative of a second wave as I previously mentioned.  Regardless, it's still a viable count and therefore it should at least be considered. 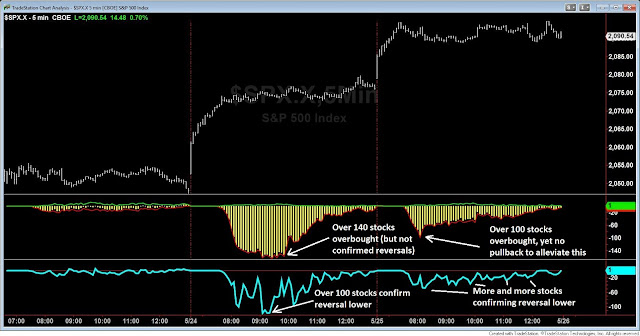 I haven't been posting much the past few weeks because I was on travel, and I have been working on using my custom indicators to analyze the S&P 500 index.  I have been able to create these two indicators which tell me:

These indicators are one of the most forward looking indicators you will find, and works extremely well on daily stock charts, and also pretty good on forex spot.

So, in the chart you can see a major extreme occurred yesterday as 165 stocks hit bearish signals (red line) and only 5 stocks hit bullish signals.  The histogram shows the difference between the two with a 160 stock bearish advantage out of 500 stocks in the index.  This is significant for a 5min chart, and one of the highest I have ever seen.

Stocks can remain overbought and oversold for extended periods of time so what's important is to see how many stocks have reversal confirmed.  For this, I look at the light blue line.  We see that yesterday the extreme came with a difference of bullish to bearish stocks at 118 stocks confirming bearish signals.  At this time, I was looking to get short, and did get short where I was eventually stopped out.  At today's open, the market has not resolved its overbought indications, so the rubber band is stretched.  This morning, the market moved higher at the open, and pushing even more stocks into overbought territory, with a steady flow of stocks confirming bearish moves throughout the day, as the market just traversed sideways.  The fact that there are so many bearish stocks confirming moves lower for two days and the S&P has not declined to alleviate that pressure tells me that the stock market is about to selloff hard and soon.

The stock market is overbought short term, and I expect a large selloff to occur early tomorrow or Friday at the latest.


PLEASE NOTE: THIS IS AN ELLIOTT WAVE BLOG EXPRESSING AN OPINION AND IN NO WAY GUARANTEES OR IMPLIES ANY PROFIT OR GAIN. TRADE AT YOUR OWN RISK.
No comments: Links to this post
Newer Posts Older Posts Home
Subscribe to: Posts (Atom)