Stocks Reverse, but on Light Volume; Euro Accelerates Towards 1.3800 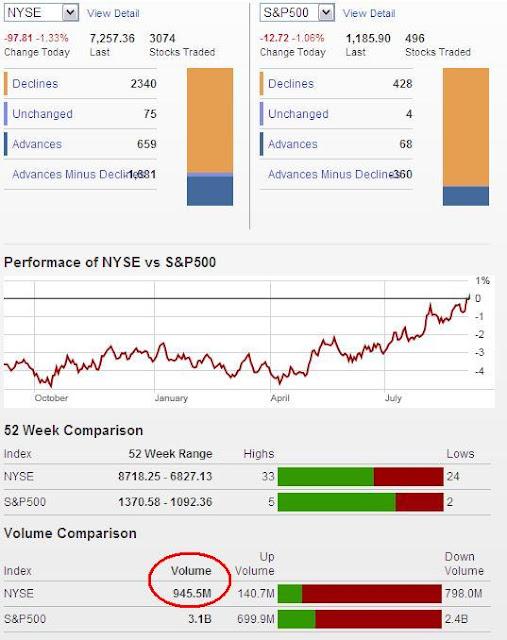 Today's market reversal was nice, and also very predictable in real time.  The market surged to get solidly positive after starting the morning sharply lower.  So it seemed the bulls were back in control.  However I looked at the euro and it was still trading heavy by blazing new lows still.  And looking at the bank ETF (XLF), it was almost 0.5% negative while the major indices were surging well into the positive.  That divergence was enough to get me to add to my small short S&P position.  Immediately after that, the market tanked and didn't look back the rest of the day.  Good news for a bear like me.  But looking at the end of day data, I'm no longer impressed.  Volume stood at only 945 million shares which tells me today's decline might just be some mild profit taking before Obama's speech, and I believe the Fed spoke today too.  So I'm unsure if a top is in right now based on the volume I saw today, and the wave count isn't helping much either because it leaves the possibility for one more high before topping.  So the door is still open for a short new high tomorrow or Monday. 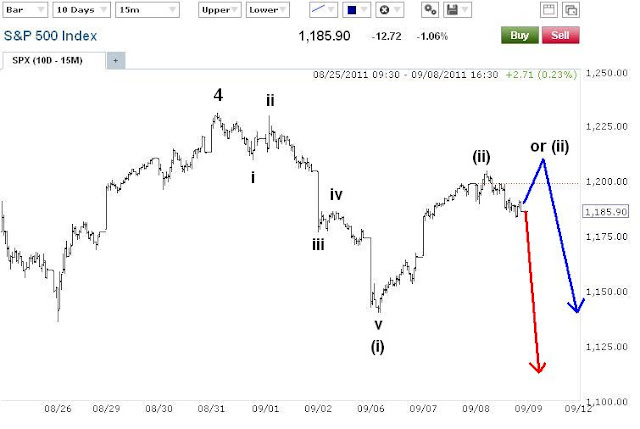 The rally from the Minuette wave (i) low looks impulsive.  This means that it's probably just the first leg of a longer and larger correction.  So today's decline is probably a "b" wave, and wave c will complete Minuette wave (ii).  I'm not certian at all this will occur though since the correction is already quite deep.  A top may already be in.  Either way, the Minor wave 4 high should not be exceeded and the risk/reward favors the bears here shorting into rallies, in my opinion. 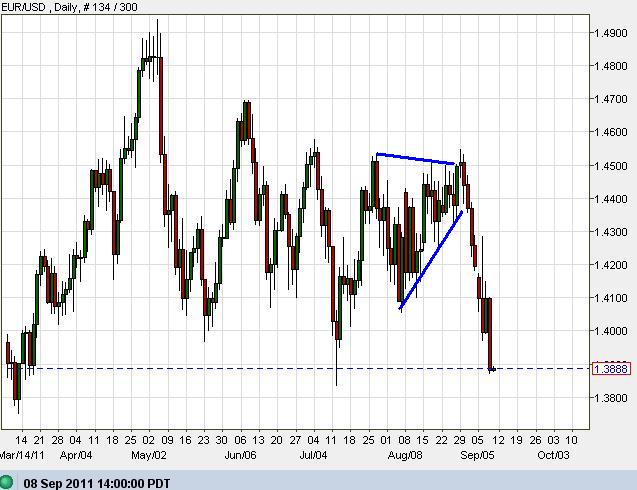 Ah, Mr. Euro finally does what he's told and falls hard from his consolidation earlier.  The move to 1.3800 I've been calling for is near and should be accomplished quite shortly.  Whether that level acts as a floor for the euro to bottom at, or just a speed bump it blasts through, I'm unsure of.  But the path of least resistance now is still down in my view.


PLEASE NOTE: THIS IS JUST AN ANALYSIS BLOG AND IN NO WAY GUARANTEES OR IMPLIES ANY PROFIT OR GAIN. THE DATA HERE IS MERELY AN EXPRESSED OPINION. TRADE AT YOUR OWN RISK.
2 comments: Links to this post 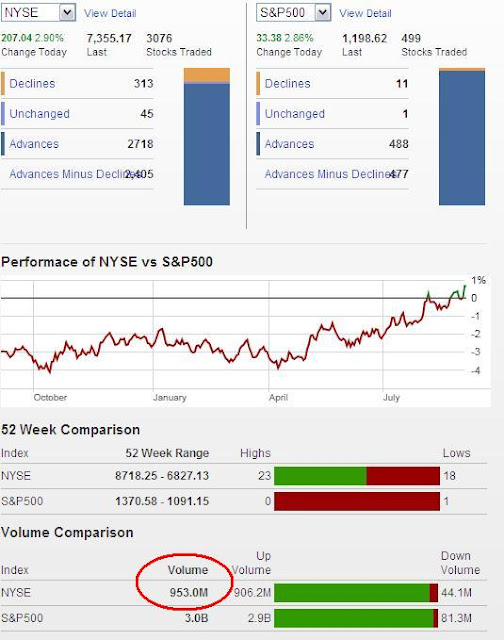 Stocks surged big today and held strong all day, closing on the highs.  But unfortunately for the perma-bulls, volume again was very light with only 953 million shares traded on the NYSE.  This is very light, and tells me that most likely this rally is corrective.  When volume returns, the market should fall. 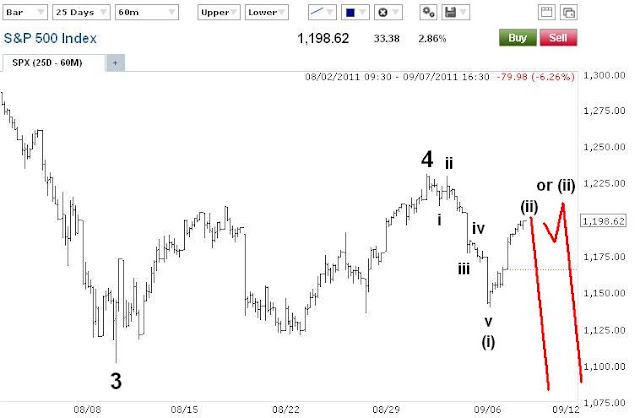 Today's rally is part of Minuette wave (ii) which should stop short of exceeding the Minor wave 4 high.  This means it offers the bears a good risk/reward opportunity here since the potential profits from breaking August's lows are far greater than putting a stop just above Minor wave 4's high.

Minuette wave (ii) may not be over though.  Despite light volume, the market was strong all day and closed on the highs suggesting there is more upside to go.  Whether that small upside occurs tomorrow morning and then reverses, or we get a slight drop and then some upside, is unknown.  Either way, the market looks bearish overall as Minor wave 5 is underway suggesting August's low will be taken out.  I would be shorting rallies. 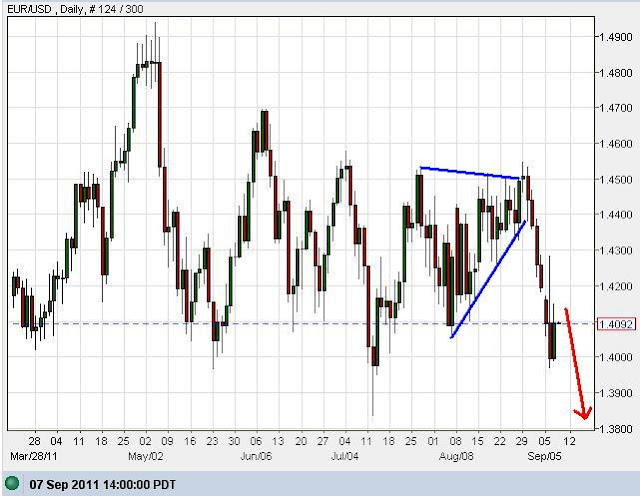 After a very long and tightening consolidation the euro has finally broken out and has done so to the downside.  I'm looking for this pair to head toward the 1.3800 level in the near future.

PLEASE NOTE: THIS IS JUST AN ANALYSIS BLOG AND IN NO WAY GUARANTEES OR IMPLIES ANY PROFIT OR GAIN. THE DATA HERE IS MERELY AN EXPRESSED OPINION. TRADE AT YOUR OWN RISK.
2 comments: Links to this post 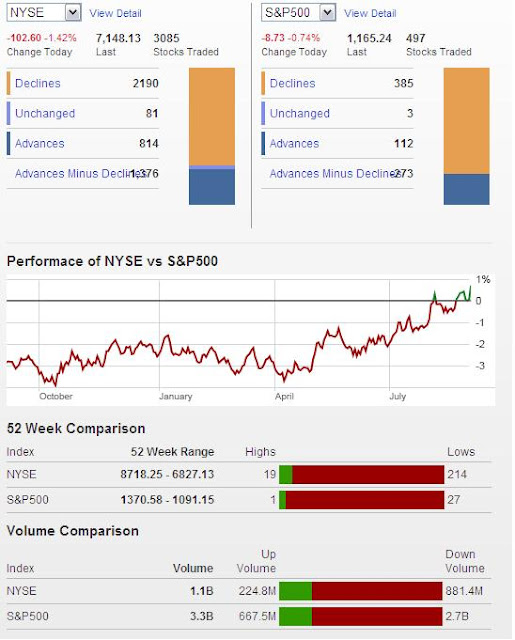 Stocks fell hard today, but volume was modest and advancers vs decliners data was fairly bearish.  But looking strictly at internals here, they are not exactly supportive of a resumption of the larger downtrend.  That doesn't mean the larger downtrend hasn't resumed, it just means that this piece of data isn't all that supportive. 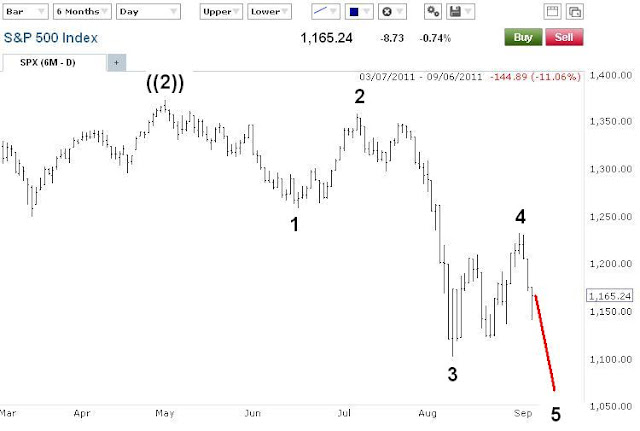 I think various longer term counts are in play here, although all the major ones I'm tracking have the market heading to a new low before bottoming out.  It's because of that fact that I don't want to get too caught up in solidifying a longer term count, and measuring corresponding waves, and looking for exact points of movement.  In my opinion, that's a waste of time.  It works for a lot of people though, but not me.  I just stick to the bottom line and simplist analysis.  In that light, the market needs a new low so I'll trade for that to occur and deal with the bigger picture once we see the structure and strength of the move AFTER the new low.

Above is one valid way of counting the decline.  Here, Minor waves 2 and 4 are much more proportionate to each other, yet it means the S&P topped much earlier than the Nasdaq 100, and the discrepencies in wave counts will result in serious problems to at least one of the two counts over time.  But looking at the S&P on its own, this count above is very much in play. 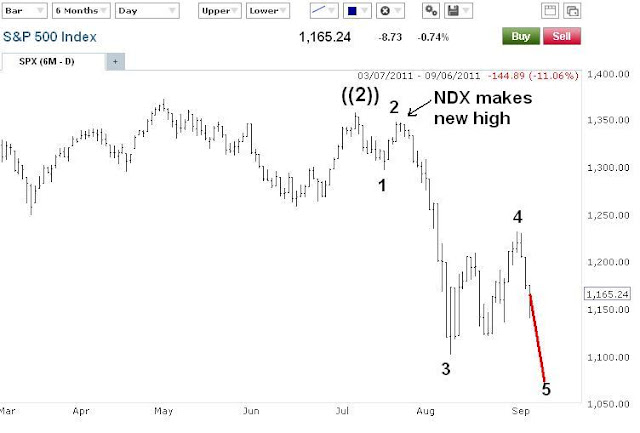 Here is another possible count I'm tracking at the moment.  This falls more in line with the top in the Nasdaq 100, which tends to lead the overall market, or at least signal major turns.  The problem is that Minor wave 4 is much longer in time than Minor wave 2, making this count a bit undesirable, yet still valid. 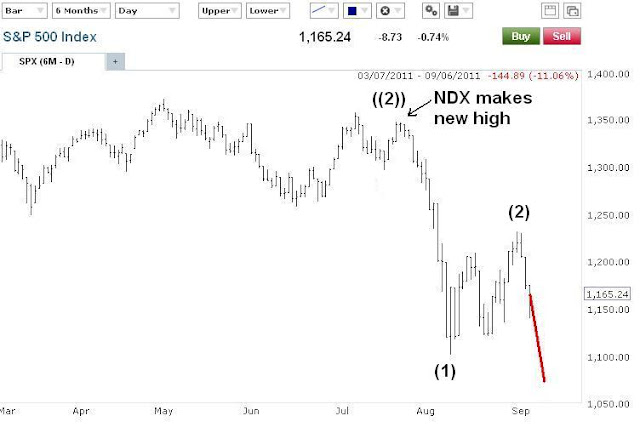 This count basically follows the Nasdaq 100 exactly and suggests Intermediate wave (1) actually completed at August's low and the rally that completed last week was Intermediate wave (2).  This count would put the Nasdaqs and blue chip Dow and S&P indices right on track with each other.  The big problem right now though is volume and internals.  If we were now in Intermediate wave (3) down I'd expect to see volume well above 2 billion shares and around 98%-99% down volume.  We're not even close to that right now.  So this count is also merky at best right now.

The bottom line is that we can go forever developing scenarios and counts that may seem likely what I want to focus on is the bottom line, and what's the simplist way to approach this.  The bottom line is that the market should be headed lower to a new low and we have to let the market action play out a little more before we get married to a longer term count.  Playing the short term while leaving the longer term open for interpretation for the moment is certainly a viable strategy right now. 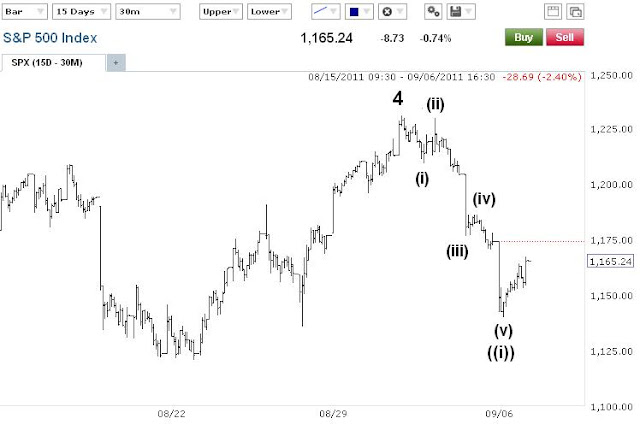 The S&P traced out a nice 5 wave decline from the Minor wave 4 high.  So the big corrective rally that occurred today was expected, and it might also explain why the internals were only modest at the close since the whole day's data is averaged out, and the big corrective rally diluted the bearish internals from the open.  Regardles,  once this correction is over, the market should continue its way lower in a hurry, regardless of what the longer term count is. 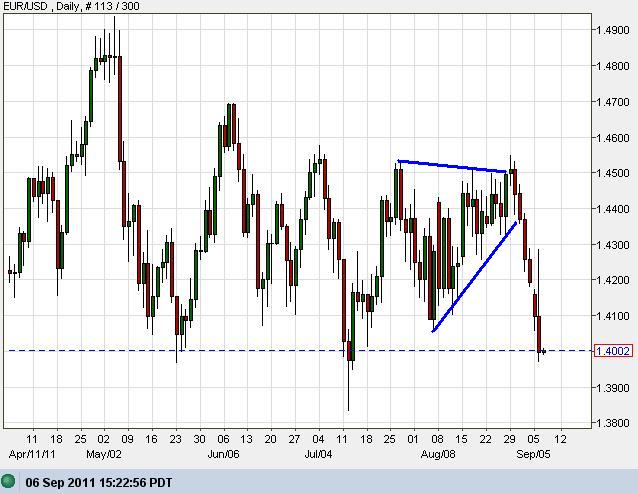 The euro is continuing to breakdown, and it's doing it in an orderly fashion as it closed a gap left from Sunday's open before resuming its downtrend.  I suspect 1.3800 should be reached rather quickly.

PLEASE NOTE: THIS IS JUST AN ANALYSIS BLOG AND IN NO WAY GUARANTEES OR IMPLIES ANY PROFIT OR GAIN. THE DATA HERE IS MERELY AN EXPRESSED OPINION. TRADE AT YOUR OWN RISK.
No comments: Links to this post
Newer Posts Older Posts Home
Subscribe to: Posts (Atom)