Stocks Flat, but Staring Down a Cliff; Euro Might Push Higher Before Collapse 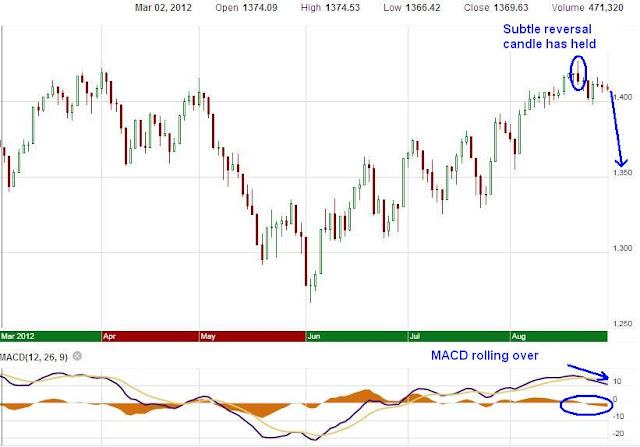 Stocks haven't done anything in several days.  Although this may seem like an overall neutral event, I see it as bearish.  The S&P made a new intraday high while most other major indices did not.  Instead of resolving this divergence with a surge higher to bring the other indices to new highs as well, the market has instead gone flat.  It's not good to reach a critical level, diverge, then go flat.  In addition, there is no volume at these levels.  I can't calculate government tinkering, but on the surface, the evidence I just listed combined with the daily MACD, and other momentum indicators, rolling over and a subtle reversal candle that has held for over a week tell me the next big move in stocks should be down. 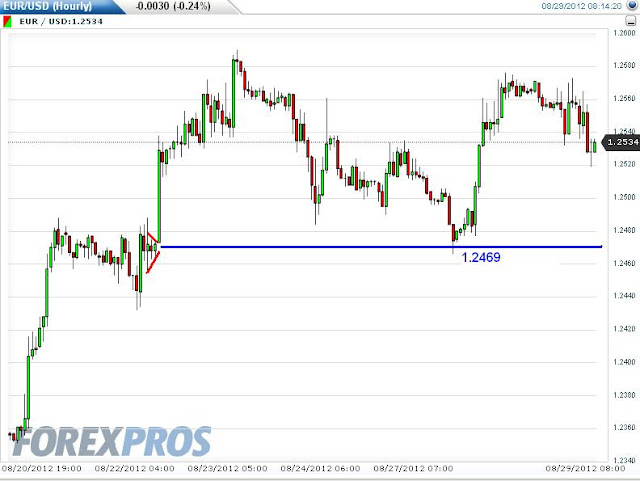 In my last post I projected that the EUR/USD would return to the apex of a triangle at 1.2469 in about 24 hours.  I was right that it did return to that level, but I was off on the timing by about 4 trading days.  So hate me or love me, or both :-) 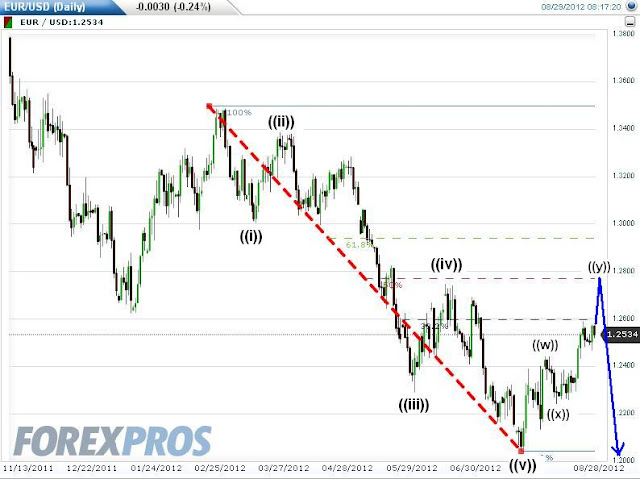 After the EUR/USD completed what looks like a 5 wave drop to 1.2000, it has been correcting upward for several weeks.  It looks like a combination correction according to EWP, which means some short term pullback now and then another surge higher to complete wave ((y)).  There is a confluence of resistance at 1.2800 since it's a 50% fibo retracement and the area of the prior 4th wave.  That doesn't mean it will hit 1.2800 and reversal exactly on that point, it just means that if it surges higher it should reach the 1.2800 area before reversing.

With stocks staring down a big cliff, the EUR/USD may not make that final push higher.  Afterall, the EUR/USD is sitting on another fibo retracement of 38% which a good place to reverse as any.  I have no position in the EUR/USD at the moment since I'm not highly confident the euro has much left gas in the tank for another short term rally.  I want to wait to see what stocks will do, and the price action in the euro in relation to that, before I take a short position again.  But the bottom line is that the euro's rally is corrective, and so I'm looking for shorting opportunities.