Stocks Wrapping up Minor 2; Euro Correction Might be Over 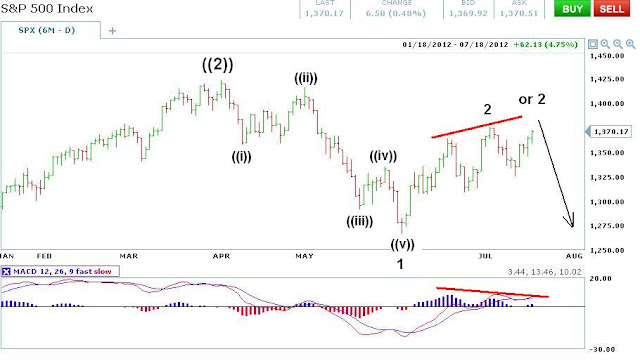 Nothing really new to report other than that it looks like Minor wave 2 has not completed quite yet.  The internal measures of the market along with momentum and price action are not indicative of a 3rd wave at Minor degree.  A new high is not far away so perhaps it's imminent that Minor wave 2 pops a little higher to complete.  It would be a golden opportunity if we were able to get that new high with a daily reversal pattern.  If so, I will jump in fairly heavy on the short side at that point.  Although the MACD is not a good timing indicator, it does show the level of momentum in a given time period and you can see that the Minor wave 2 rally has been getting weaker and weaker as it has made new highs as reflected in the MACD histogram.  So, I should be looking to short when the opportunity arises.  And there would be a great shorting opportunity if we get a daily reversal pattern with a new high. 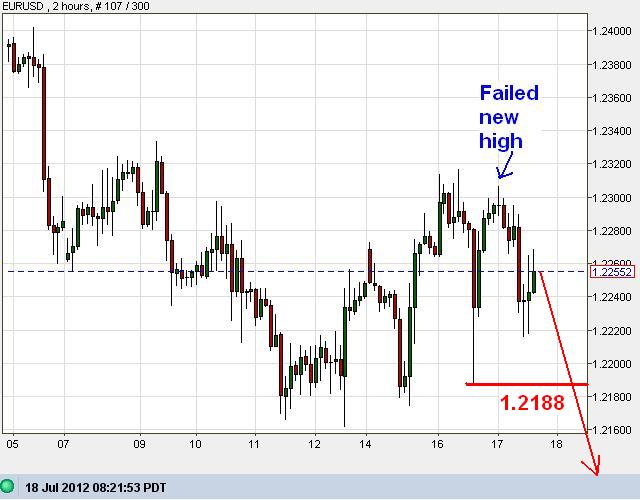 The EUR/USD has tried very hard to establish an uptrend.  And although it has technically done so by definition, i.e. higher highs and higher lows, it is an extremely weak and hard faught uptrend.  Every new high has resulted in sharp reversals to the downside.  But the most recent attempt at a new high has failed, and another selloff ensued.  Unfortunately for the bears, that selloff has not made a new low, which would have solidified that the uptrend was broken.  However, the failer to make a new high signals to me that the trend is exhausting.  A new low beneath 1.2188 would signal that the larger downtrend has resumed and getting should would be wise in my opinion.  I'm even taking little nips at the short side right now.

Attention forex traders: Elliott Wave International is offering a free webinar with one of the most sought-after FX trading strategists in the world. On Wednesday, July 18 at 1 p.m. (Eastern time), learn how he called recent declines in the euro-dollar and see his 45-minute presentation titled "How to Trade the Top 5 Forex Opportunities Right Now."  Seating is limited to the first 1,000 active traders. Reserve your seat now.


PLEASE NOTE: THIS IS JUST AN ANALYSIS BLOG AND IN NO WAY GUARANTEES OR IMPLIES ANY PROFIT OR GAIN. THE DATA HERE IS MERELY AN EXPRESSED OPINION. TRADE AT YOUR OWN RISK.
13 comments:
Newer Posts Older Posts Home
Subscribe to: Posts (Atom)