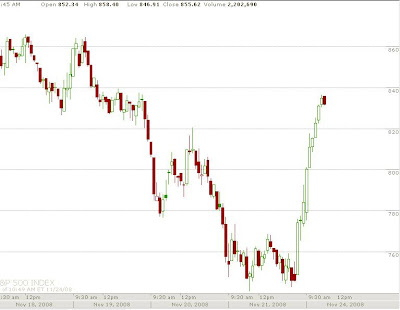 The rally from Friday and into this morning was unexpected as far as strength and length. As you can see from the above 15min S&P chart, it's a straight line up. That won't continue, and it's gone up too much too fast to buy into at this point. The elliott wave structure calls for at least one more new low, I project to the 710 area in the S&P before a significant bottom forms. However the length and strength of this rally is not something to blow off, especially considering we've profited so much on the short side up to this point and we know a bottom is forming. Caution is warranted. Whether a bottom has been formed or not, once this rally gets some pullback I will be buying more S&P ETF call options and selling my short S&P ETF positions to prepare for the big rally that will come soon.

NYSE breadth today is very strong, with advancers outpacing decliners by 7-1 and 93.5% of all volume to the upside. This tells me that no sellers are in the market today and heavy buying demand is in play and will probably last all day unless some huge selling power gets ignited somehow. I do feel that it's just that the sellers became exhausted last week after pushing the market down 13% in two days and now the bottom fishing crowd has come in to dominate the day. Again, supposedly this rally is based on a government official appointed by Obama. What?! And the Citibank bailout. And we know how well all the previous bailouts were recieved in the market. This does not seem bullish to me. It seems again like a "hope" rally, in that everyone "hopes" the bottom is in and they don't want to miss the big move.

Bottom line: I still feel we have new lows to achieve in this market before a major multi-month rally ensues, but seeing as that we're so close to that happening, any weakness from here on out I will be moving my bias to the long side.