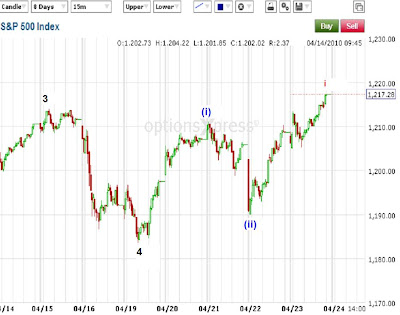 The market continued to push higher as the evidence Thursday presented. The bullish count I have is very aggressive at these overbought levels but I'm going to start with a very bullish account, and then downgrade it as the market movement and structure requires. The current count will allow for wave ii pullback soon but will lead to a wave iii of (iii) of 3 higher, which will have to a sharp big strong rally. So if the market doesn't rage higher after that wave ii, I know I'll have to restructure the count. There's also the possibility of a large 4th wave triangle unfolding, or an ending diagonal for a 5th wave right now. But these seem a bit too large and time consuming at this point, and I think it's a bit too early to start looking for a triangle or diagonal at this piont. Once the market starts going more sideways without a 3rd wave sharp rally move occurring, then we can focus more on the triangle and diagonal structures.

So that's it for now. The market's larger trend appears to be up, but the overbought and jubilent mood right now warn that the higher it goes, the faster and larger the ensuing decline will be. When I think I have an idea that a top might be forming, I'll post it here.