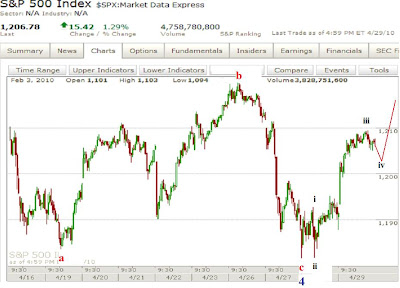 The market surged strongly higher right out of the gate this morning and continued the rest of the day in what appears to be a wave iii. Tomorrow it's likely to get some pullback or sideways action for wave iv which will eventually give way to another surge above today's highs in wave v. What's of importance here is at what degree of trend is this 5 wave rally? Is this 5 wave rally going to complete the larger wave 5 and end the rally that started early February? Or is the 5 wave rally just a wave 1 that still needs waves 2-3-4-5 to complete wave 5? I don't know yet. What will give us some clue though is whether or not wave v ends above this year's highs in the major indices. If wave v makes it above this years highs, then it's quite possible that will complete wave 5 and create a major top and reversal. If it doesn't make new highs on the year, then it's probably just a wave 1 within wave 5, and wave 5 has quite a bit further to go. Today's rally was quite strong with almost 80% NYSE volume to the upside, so we should have further to go on the upside regardless.

So again, the key to when a top should register is finding out what degree of trend we're in right now. If wave v rallies to new highs on the year, then it may mean wave 5 is complete and a large reversal will occur. If wave v does not make a new high on the year, then it's possible the 5 wave rally from yesterday's lows in the Dow (Tuesday in the S&P) is just a wave 1 within a larger wave 5 which means much more rallying in the coming weeks. 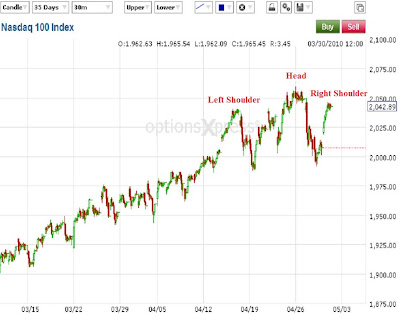 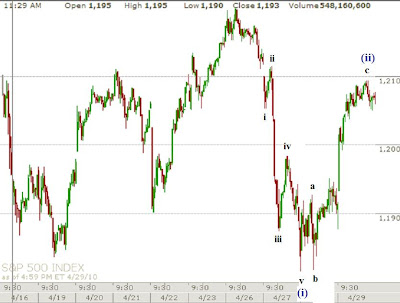 Above at the top is the Nasdaq 100 chart again, showing the possible head and shoulders top forming. Interesting that yesterday I said that the right shoulder could carry to the 2040 level before topping and reversing and that's right about where it halted at today (see yesterday's chart here). So if we get a sharp sell off tomorrow with an impulsive structure then I'll be putting this head and shoulders pattern on the forefront of my analysis, and view the alternate bearish S&P count just above as my primary count. A break below 1193 in the S&P cash index would be a strong sign that a top was in and these two bearish charts above are correct.

So the bearish counts are a close second place as far as determining the liklihood of structure unfolding now. If the NDX's head and shoulders pattern holds, and the S&P declines beneath 1193, I'd say that a larger top had already registered and that a big and lengthy selloff is underway.