This morning I saw the Nasdaq futures still showing tremendous bearish divergence on the 1hr - 4hr time frames. This was on the stochastics, MACD, and even the RSI. Bearish divergence on the RSI, especially at chart time frames above 30min tends to be a very good indicator. This suggests heavy weakness in the Nasdaq coming. Plus, it's close to its recent highs from a few weeks ago, so risk is well defined and tight if taking a short position.

I sold some of my QID position to free up capital to buy QID call options (which double shorts the Nasdaq 100). I wanted to short the Nasdaq 100 on even more leverage because I feel it's about to fall hard.

This Nasdaq weakness may lead the blue chip S&P and Dow down as well, but that's yet to be seen. I don't say any big divergences in the blue chips on the larger time frames, and I keep getting 5 and 3 waves both up and down all over the place so the trend is unknown to me right now. Also, breadth is slightly positive in the NYSE even though it's been in the negative most of the day. So I'm primarily looking at the Nasdaq for direction because the only area that's showing any signs of immediate direction.
No comments:

I noticed this morning that the Nasdaq futures chart on the 1 hour+ timeframes is showing a huge bearish divergence on the MACD especially, but also the stochastics. Plus, the Nasdaq is getting real close to the June highs. This tells me the Nasdaq is about to roll over soon. And that should lead the blue chips down as well.

Look for Nasdaq weakness compared to the blue chip S&P and Dow. Once the Nasdaq starts underperforming those indices, it may be the first sign of a top and reversal.
No comments: 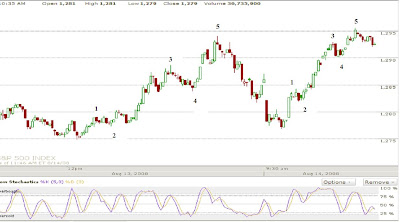 The above chart is of the S&P over the past two days on the 3 minute chart level. You can see 2 clear 5 wave rallies which I labeled. Also, NYSE breadth has flipped to be just as strong on the upside as it was weak on the downside two days ago. Demand to buy stocks is back, and there are 2 impulsive rallies to support that. It is possible to count those two five wave rallies as an A wave and a C wave in a zigzag correction. But it should be a correction from a 5 wave decline. I don't see a five wave decline occuring prior to that, I see a three wave decline. As has been the case over the past few weeks, the market has been on crack and forming impulse waves both up and down. But with all that said, the rallies are becoming harder to sustain, bearish divergence is building on the daily charts, and the rally off the lows last month is choppy. So I have no doubt this is a correction to the upside and the larger trend is still down. But as we can see, trying to count corrections are very difficult. The best thing I can do is protect myself from huge rallies, and just watch and wait...........patiently.
No comments: 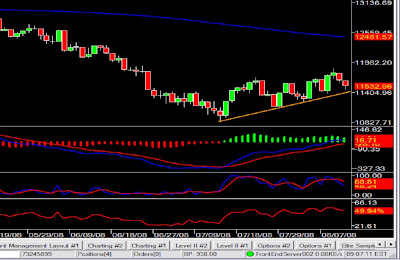 Breadth closed almost flat yesterday with only about 56% of NYSE volume to the downside which is much less than the 72% yesterday. I can also count a 3 wave correction downward complete. So the signal for a short term bottom may be in. However the data that came out this morning has shot the futures down this morning and it looks like a pretty weak open this morning. So I want to creat a "breaking point" that should hint that wave 2 has topped and wave 3 of (3) is underway. Notice on the daily chart of the Dow above the uptrend line (orange line) that has formed. The market is telling us that this line is important because it's tested it several times. I'd like to see a break and close beneath the trendline, but more importantly I'd like to see a close beneath the previous low that touched the trendline. This level is at 11,388 in the Dow and 1262 in the S&P. A close below both those levels would indicate that wave 3 of (3) is underway.
3 comments: 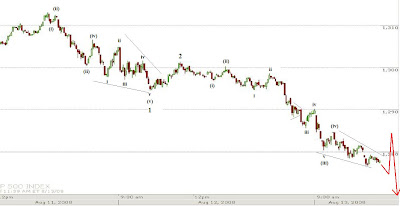 The selling pressure continues today as I called for yesterday. But the key question is whether this is a correction before another rally to new highs, or if wave 3 of (3) is underway. Right now, it looks like an A-B-C correction is unfolding, and you can see my EWP wave count a couple posts ago under the one titled "August 12, 2008; Nothing New After Today".

But I keep looking for a possible wave count that would have this as an impulsive decline, combined with NYSE breadth being 90% down volume and at least 3:1 decliners vs. advancers. Well, so far today (11:25 eastern) NYSE down volume is only at 65%, which is about 10% less than yesterday's close which was actually 25 points stronger. This is bullish because it shows the downtrend is weakening internally. Because of this, it seems another strong blow off type rally may be coming which will rally the Dow over 500 points POSSIBLY, only possibly, so I bought DXD put options today to protect my tail in case this happens. DXD has rallied yesterday and today, making the put premium attractive on it.

With all that caution and possible bullishness said, I posted a possible wave count that would mean wave 3 of (3) is underway. The main problem I had with this being an impulsive decline was with the first wave which ended very choppy. But it's possible to count that as an ending diagonal 5th wave, however I feel I'm forcing it a bit in doing so. But it is possible so I posted the wave count on 3 minute closeup in the above chart. The red line in the bottom right is the projected near term path. After posting all the numbers I realized my degrees are off from the first wave to the last wave. But you get the point I'm making here in the chart regardless.

For the record, I'm just posting this as a possibility. Right now I feel the evidence does not support this wave count, and that wave 3 of (3) is not underway yet. But this count needs to be at least considered.
2 comments: 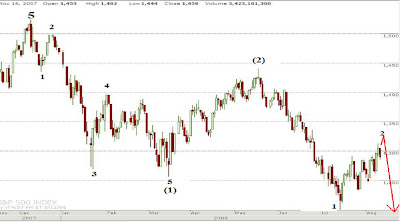 In light of Diver's comments to keep an eye on the big picture I thought I'd do just that and post a chart of the big picture. We're waiting for the wave 2 of (3) rally to end which will give way to a wave 3 of (3) decline that will destroy the market. It should shave at least 2,500+ points off the Dow, and do it in just a matter of weeks probably. This can occur any day now, but most likely not for another week or so. I'm agressively short............and waiting.
No comments: 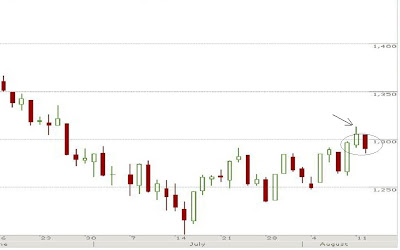 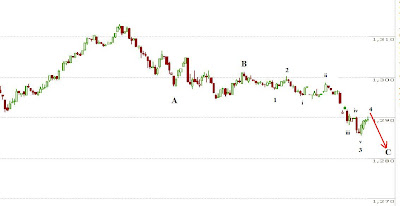 Nothing new to really add from my earlier post. I'm not at all convinced that wave 3 of (3) has started. 72% of total volume on the NYSE was to the downside today, which was pretty bearish, but decliners outpaced advancers only 1.9:1, which is nothing stellar. A wave 3 of (3) down should consist of over 90% of NYSE volume being to the downside, and decliners outpacing advancers by at least 3:1 for the majority of the wave down. This just looks like a correction before another test of the highs.

However I don't think this little downward correction is over. Today's decline formed a bearish engulfing candlestick on the daily chart (see top chart, circled area). Also, yesterday's decline late in the trading day formed a large wick at the top of the candlestick (see arrow on top chart). Both of these are bearish candlestick formations suggesting further losses tomorrow. Also, it appears this current correction is unfolding in wave C right now and it's not quite complete (see bottom 5 minute chart where it needs to fall to a new low in a wave 5 to complete C and then resume the rally). So I expect further weakness tomorrow before any short term bottom forms and the rally resumes.

This is all short term analysis and speculation on my part. It just seems the trend is still up for now. But eventually it will roll over in a huge decline in wave 3 of (3).
2 comments:

Thanks Diver for waking me up today, lol. With Friday's monster rally that broke any immediate bearish secenario from possibly unfolding, it's taken a bit of the wind out of me. And I see further rallying ahead and I'm holding short for the big wave 3 of (3) down so I'm not following every little short term movement in the market right now. I don't want to get emotional about all the pain I'm going through now because it might lead to a bad decision. I've decided to just sit back and wait for wave 2 to end, and give way to wave 3 of (3) down. Just waiting.

The weakness in the market today is not impressive all, neither from an EWP perspective or a breadth perspective. I don't see any clear 5 wave declines, and breadth is mildly weak. Not at all what I'd expect if wave 3 of (3) down was underway. The market has rallied a lot the past week or so, and quick, so I expect at least some pull back here. But at least one more new high seems likely as of now.

One positive note from a crowd psychology standpoint: I have noticed the bulls are back out talking about a market bottom and buying up high beta (higher risk) stocks like small caps and technology so they don't miss out on the next big bull run. I'd like to see more and more of this talk on financial TV because once the bulls start coming back talking about a bottom and minimizing the bears' point of view, that's when the market will collapse. Now that those bulls are starting to make some noise, it appears we're approaching that time. I do strongly feel that wave 3 of (3) will begin by the end of August.
No comments:
Newer Posts Older Posts Home
Subscribe to: Posts (Atom)