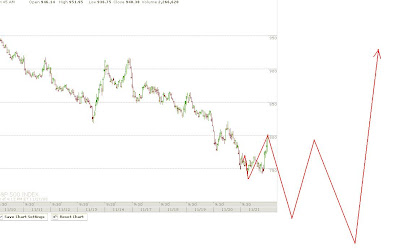 Looks like the market moved exactly as I projected this morning (see chart below on prior post). The more it follows my projected path, the more it strengthens my wave count.

Check out the above chart where I just copied my projected path from this morning to an updated chart after today's market action. You can see that the market followed the projected red lines fairly well.

Even though today is options expiration day and big volatility was expected, especially a rally being expected on my part, CNBC.com reports that the rally was due to Obama appointing a new Treasury Secretary. What! So the market rallies 600 points because a new Treasury Secretary has been appointed? What? I hope this is why the market rallied, becuase if so it will quickly be reversed early next week. I think options expiration combined with the market losing 13% of its value in 2 days as the reason for the rally. By rallying like it did today, it relieved a lot of the oversold pressure on the market and it allows the market to fall once again to new lows once this rally is finished. I expect this market to selloff again early next week, perhaps Monday afternoon.
No comments: 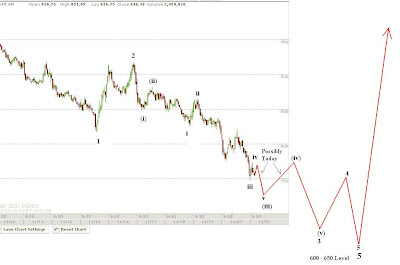 The thrust down from the triangle is still underway and in full force. Above is a close up of the 15min S&P wave count I'm proposing now. This is my best shot at what's unfolding. The market should continue to chop lower in the upcoming days, but today is option expiration day and sometimes it throws a wrench in the Elliott Wave count. But regardless of today's action, the market is headed lower.

Yesterday was a huge day for the bears as they broke through various key support levels that have been in place for years, and then closed below them. This action is very bearish, especially if they close below them again today.

Look for the selling to continue to the 600-650 level in the S&P with the possibility of a few short lived but fierce snap back rallies.
No comments: 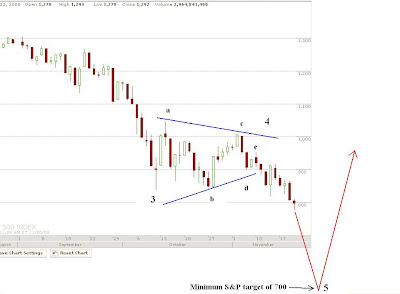 Yesterday's heavy selling pressure and NYSE downside volume at 98% and decliners outpacing advancers by 15-1 tells me that the ending diagonal scenario is a low probability. Ending diagonals are a structure based on a weakening of trend. So I would expect 60%-70% down days with a 2.5-1 decline/advance ratio. Yesterday's strong downside move tells me that we are thrusting from a triangle, or in a 3rd wave decline.

Above is a chart of the triangle scenario which is most likely occurring. My initial S&P target is around the 700 area. Any rallies should be used as opportunities to short or re-short.

Also note that thrusts from triangles are strong and fast, but they are also quickly reversed completely. So what I'm doing is buying call options on the way down to protect myself from getting caught off guard on that big reversal as well trying to profit from it as well.
No comments: 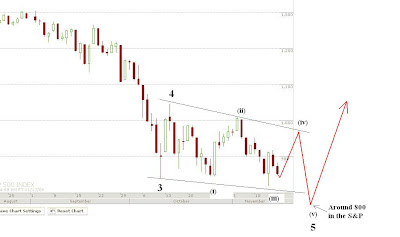 I expected market destruction today as my primary wave count has us thrusting from a 4th wave triangle to new lows. Selling should be fast and fierce, but today we had the bulls in control most of the day except for the first hour and last 30 minutes. 81% of NYSE volume was down on the day which is very weak, but not as weak as I'd expect. This should be a 3rd wave of a 5th wave thrust, so breadth should be closer 90% down. The action today elevates the possibility of an ending diagonal unfolding right now. We should know if this is possible by the end of tomorrow, or Wednesday. If the ending diagonal is unfolding then we should be in a significant rally phase the rest of the week possibly taking the S&P close to the 1000 area. Once that rally endes, it will rollover again to a slight new low around 800 or just below it before it undergoes a fierce multi-month rally.

Due to the choppiness and uncertainty, I have protection for my positions. I'm currently in SDS which is an ETF that double shorts the S&P 500, and I also bought January call options on the SPY which is an ETF that's single long the S&P. Any significant rallying in the S&P will allow me to close my call options at a nice profit, just as any serious declines will allow me to close short positions. I'm employing this strategy because it seems that the only options I see for the market are that a sharp rally and quick reversal will happen, or a sharp decline and quick reversal will happen. So why not position yourself to profit from both direction moves while protecting yourself at the same time?

The bottom line is that if the ending diagonal is unfolding then the market should rally significantly very soon, probably tomorrow. And ultimately the market will only make slight new lows on the year. But if the market keeps selling off then we are thrusting from a triangle and the S&P should get to at least 700 by next week!
No comments: 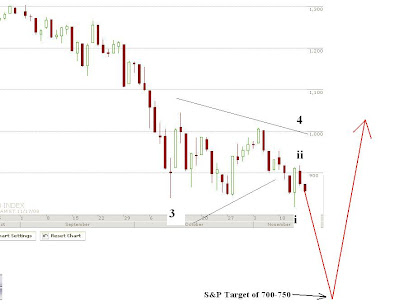 New lows are the year are about to be acheived. Wave structure and overly complacent bullish optimism that a bottom is in all over TV confirms this. My target for the S&P is the 700-750 area. If my count is right, we are thrusting down from a triangle which means the market should fall in a hurry, most likely all week. Once it bottoms it will be quickly reversed and a large rally will ensue, so the bears should use caution if overexposed without any protection.
No comments:
Newer Posts Older Posts Home
Subscribe to: Posts (Atom)