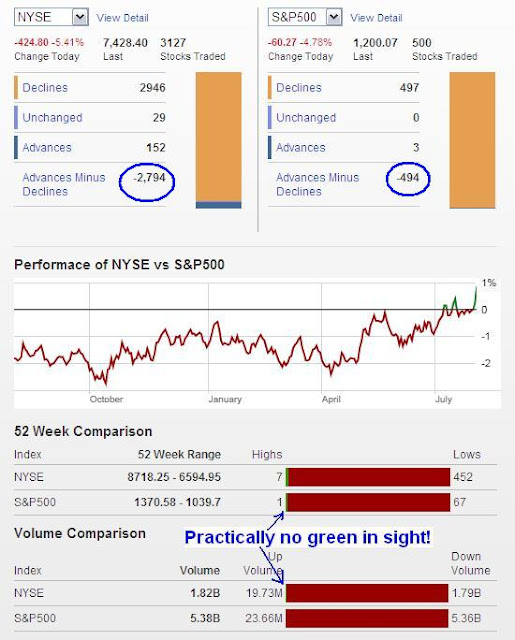 Yesterday I said the market was oversold and that bears should exercise prudence and caution and wait for rallies to get short.  I also added that taking a very small short position late in the rally yesterday would also be wise.  And of course, I wish I had gone "all in" yesterday, but that would have been a pure gamble on my part.  And I try not to gamble in the markets anymore.  The only reason I said that it would be wise to take a small short position yesterday is because sometimes when the market is oversold, and there's a big looming topping pattern in place (head and shoulders), the market will accelerate downward with a massive selloff.  But this is rare, so putting on only a small short position seemed wise.  Hind sight is 20/20 though, and today's action won't change how I approach the market in the future.

Now I don't want emotions to get ahold of me, I'm in the business of taking well thought out and disciplined strategies that offer a high possibility of success relative to the possibility of failure.  So I still want to approach the market smartly here and not get caught up in the "I'm gonna miss the move unless I put everything I own in to short the market now" crowd.  With that said, I must say the charts, price action and internals look absolutely horrible right now and it appears that the equity markets are in severe trouble.  So finding a good entry point for the bears might be difficult.  All I can say that if someone were to have to get short and just can't stand having a small, or no position on right now, then I'd suggest that they make sure that they always keep at least some cash on hand to add to their positions on rallies, and/or to make sure they can survive a huge and sharp snap back rally.

Looking at the internals today it's hard to think that there's anyone left to sell.  An amazing 1.82 billion shares were traded on the NYSE today.  This is about 1 billion more shares than the average the past few months.  Buyers were non-existent as the S&P had only 3 advancers and 497 decliners while the NYSE had only 152 advancers and 2946 decliners.  NYSE down volume represented an amazing 98.4% of all trading done today.  Those numbers are absolutely incredible in their entirety.  Just amazing.  But with so much selling force done today in such a calm orderly fashion, it's hard to think that there's anyone else left that's going to sell tomorrow.  I mean, who would have waited all day through a slow orderly selloff to -500 on the Dow and then is going to wake up tomorrow and sell?  Unless more horrible developments take place in Europe or early in the US session tomorrow that aren't already expected, then I would think we'd at least get a relief rally either early tomorrow morning, or most likely after an initial decline early in the morning where it will bounce back later in the day.  BY NO MEANS AM I TRYING TO GET IN LONG AT ALL.  I'm merely preparing myself for any rally that I can short into.

Unless the Dow rallies over 500 points tomorrow, this market looks horrible right now and the short side should be favored whenever opportunities arise, in my opinion. 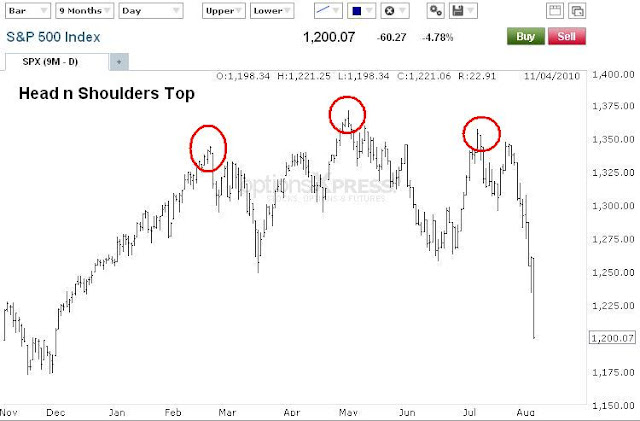 For those of you who are savvy in chart technicals know this chart looks very very bad.  You have a major head and shoulders topping patter that has completed and has been followed by a very sharp drop to new lows.  Today's close occurred on the lows suggesting further selling early tomorrow morning, although I'm not sure who out there missed their selling opportunity today and decides to sell tomorrow after a 500 point drop.  But the chart is the chart, and it suggests that as it stands now, this market is in severe trouble.  Now that can all change in a heartbeat, like with a 600 point Dow rally Friday.  But we trade the with the data we have and view the market as it stands now.  And as it stands for the moment, stocks are in big trouble. 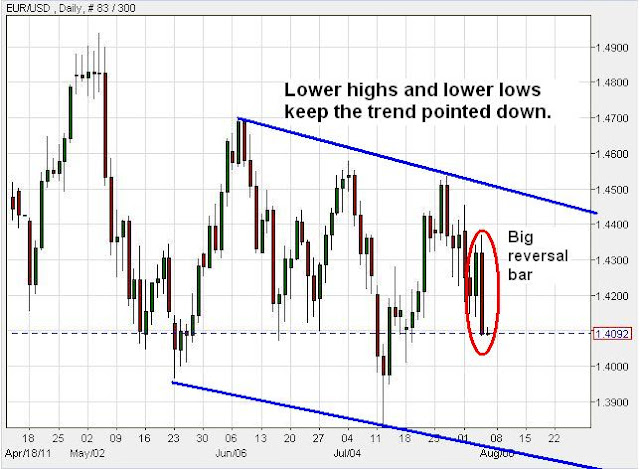 The euro wasted little time taking back yesterday's gains and breaking down to new lows which I said yesterday would mean follow through to the downside.  The euro's series of lower highs and lower lows suggests the trend is down, despite no discernable wave pattern to count.  Look for the euro to charge for the 1.4000 area soon. 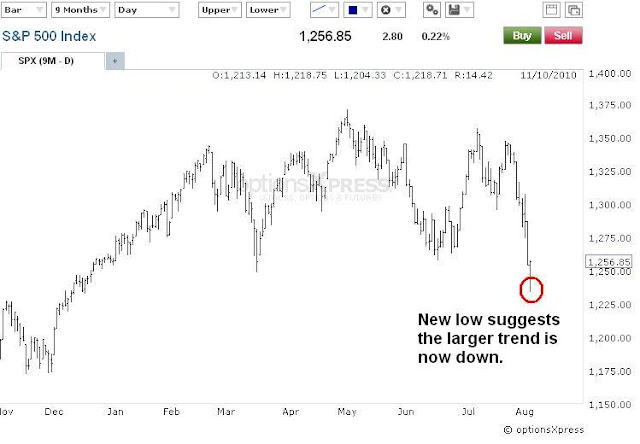 The S&P broke down the levels I cited in my last post, making the bigger picture look bearish.  We've had rallies that failed to make new highs on the daily chart, and now a new low today.  This suggests that the trend is now down in the bigger picture.  There's a possible major head and shoulders top in place now, suggesting much further downside in the weeks/months to come.

With that said, the market quickly recovered after breaking down to a new low this morning, typical behavior when establishing a new extreme.  So as long as we don't make a new high on the daily chart (around 1350), I see the larger trend as down, which means I'm looking to short rallies. 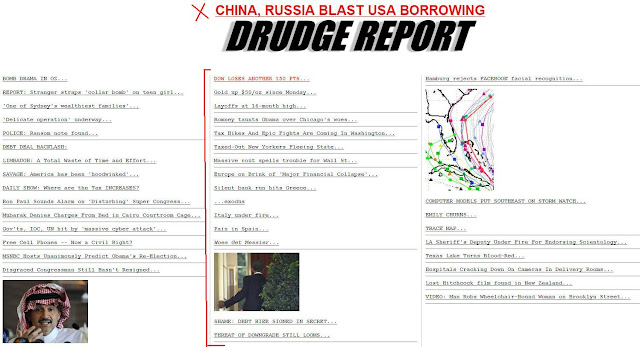 In today's national news, as seen by http://www.drudgereport.com/, there is massive pessimistic news out there right now.  Not the type of mood I'd expect to see at the start of a major selling phase, but more like what I'd expect to see at a bottom.  So I still want to stick to the basics here with a disciplined shorting strategy.  As long as a new daily high isn't reached (around 1350), I want to short rallies as I get them.  With the market is oversold intraday and the news headlines so negative right now, it seems a sizeable bounce is due soon that should give me a good opportunity to enter short.  With the markets almost even right now, entering a small short position right now also seems wise. 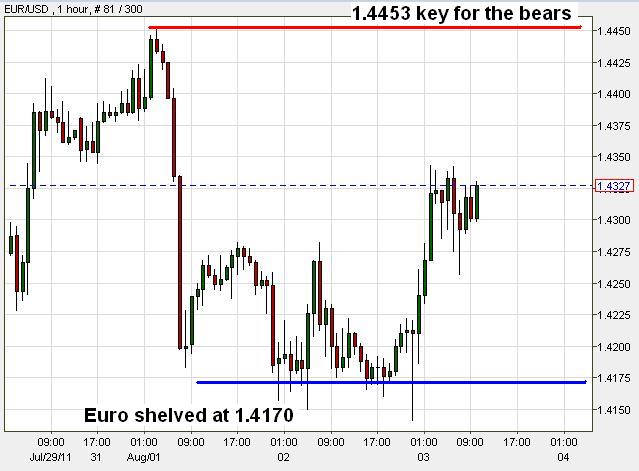 A solid shelf has been established in the euro at the 1.4170 area.  It has tried several times to sustain a break beneath this level but has failed to do so and is now rallying sharply.  This level is obviously important so I'll keep watching it.  The bears must see the euro trade below 1.4453 in order to keep the short bias intact, and a sustained break below 1.4170 should open the door to further heavy selling.


The Single Most Reliable Indicator

In this video excerpt, Elliott Wave Financial Forecast Editor Steve Hochberg explains one of the most important things to keep in mind when assessing a market, "Extreme opinions, shared widely, constitute the single most reliable indicator of an impending change of direction for a market." Enjoy your video excerpt.
To find out more about the Wave Principle, be sure to watch the Club EWI video series: Learn the Why, What and How of Elliott Wave Analysis. This 3-video series is a great way to get started with the Wave Principle. You can watch these videos free with a Club EWI Membership.

Watch the Club EWI video series: Learn the Why, What and How of Elliott Wave Analysis. This 3-video series is a great way to get started with the Wave Principle. You can get these videos free with a Club EWI Membership. 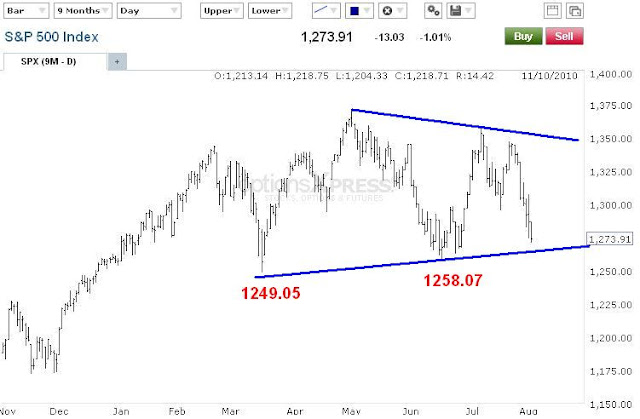 S&P momentum is clearly down at the moment, but you can see how wild the market has been the past few days to where it can turn on a dime at any moment.  So be careful.  I want to see the S&P break down before I get short with confidence.  Making new lows beneath 1258.07, and especially 1249.05 would be a good sign that the larger trend has reversed to down, and that the big head and shoulders pattern top may be in force.  If so, the S&P has big downside potential and I want to capitalize on it.  But I'm not getting sucked into a trap, so I want to be patient and make the market prove to me that it's time to get short.

To keep me honest, I have to respect the potential for a triangle-like consolidation that's occuring which means there will be a very sharp and long rally coming at any time.  But if 1258.07 and 1249.05 are taken out, then that bullish consolidation potential will be significantly diminished.  So I'll wait for that breakdown to occur before I get short. 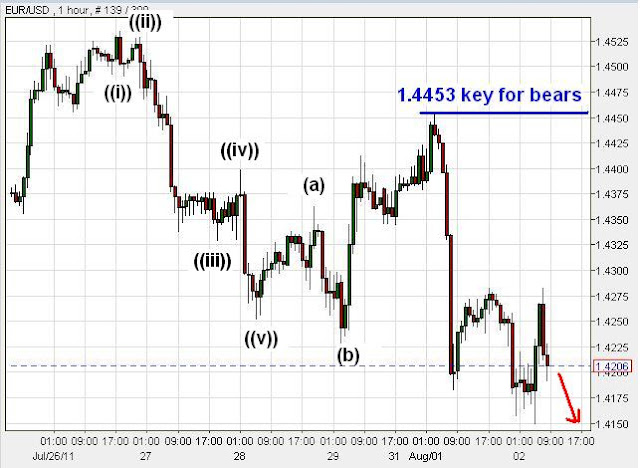 The euro has been a choppy mess downward, making it hard to develop a high confidence wave count at the moment.  But the series of lower highs and lower lows is well intact so the path of least resistance is down.  I'm bearish the euro as long as 1.4453 remains intact.