I don't have time for a normal post today but with the weakness in the market today I wanted to at least post something to update the action.  The decline looks like a clear three wave drop suggesting new highs are still on the horizon.  The key levels and trendlines I've been posting are still key for the bears to take out in order for a short position to be considered.  Internals today also don't support a top and new downtrend starting off with only 927 million shares traded on the NYSE, and only a slight bearish bias for decliners and down volume.  Not a convincing case for a major top being in place, so I have to assume the market will continue higher.  I remain on the sidelines.

As for the euro, it appears to still be correcting the previous impulsive move down.  Once the correction is over, the euro should move down hard.

Posting will probably be light this week since I'm on the road.  Good luck all!

Stock Volume Continues to Plummet; Euro Dips Down to a New Low Again 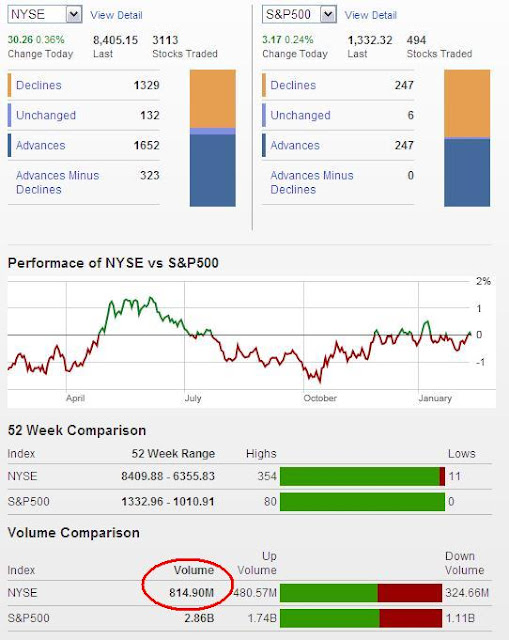 The market did nothing today so price action tells us nothing new.  But volume tells a lot since today was one of the lightest volume days I've seen since the holidays at only 815 million shares traded on the NYSE.  The market's uptrend is still intact, but enthusiasm and momentum for the rally has waned significantly the past week or so.  The upcoming decline should be sharp and deep. 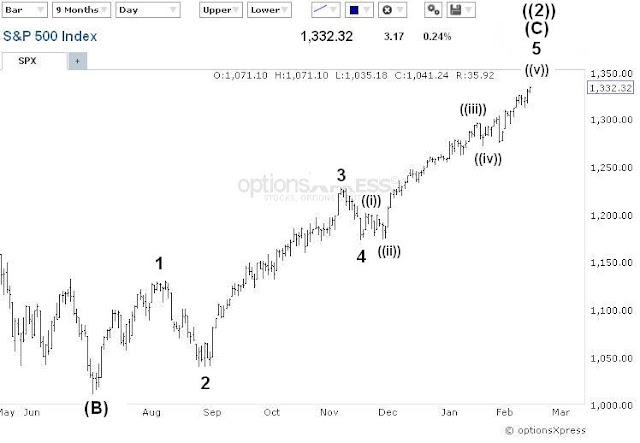 The wave count is the same and leaves us waiting for the Minor wave 5 to top.  The subdivisions of Minor wave 5 have us finishing up Minute wave ((v)) at any time.  But with no evidence of a top in placel, we have to expect higher levels.  That doesn't mean I'm getting long, it just means there's no "execution" to the short trade in place yet and so I'm still going to wait and be patiently bearish. 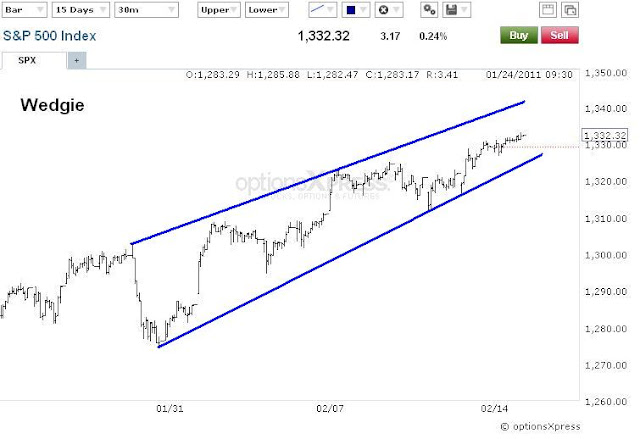 The 30min S&P chart above shows a "wedgie" structure for the price action lately, and momentum and internals support this lethargic behavior as well.  Once the uptrend breaks down, the move should be sharp and deep, at least initially.  A close below 1311.74 would be a good signal that a top might be in and aggressive traders might want to consider getting short.  A break and close beneath 1275.10 on strong volume would be a very strong sign that a top was in.

I'm not sure that the upcoming top is that of Primary wave ((2)), but even if it's not, a correction to around the 1180 level (prior 4th wave) is still very likely.  Either way, waiting to get short seems to be the best play here in my opinion........as painfully boring as it may be. 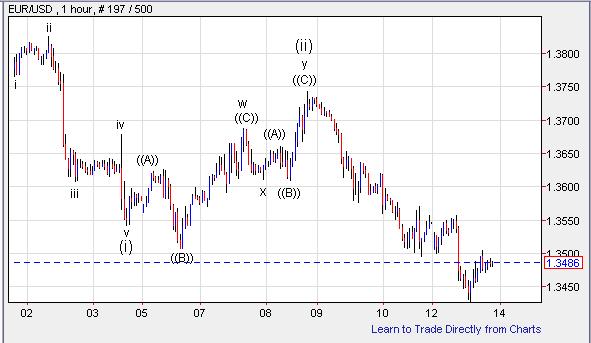 The euro continued falling to fresh lows last night and the bearish count and outlook remain on track.  I'm unsure as to the very short term wave count so I'm not including it.  But right now I see no reason to abandon the bearish stance.

On the Docket: The Case Against Diversification