I was stopped out of my S&P trade right at the open but the market was sold off hard immediately. So I re-entered my short position on the rally later in the morning with a stop at today's highs. Internals look fractured and weak. Monday should bring us a selloff. I'll watch the structure and intensity of the selloff closely to try and determine if it's just a minor pullback, or if it's the beginning of wave 3 down to armageddon.
No comments: 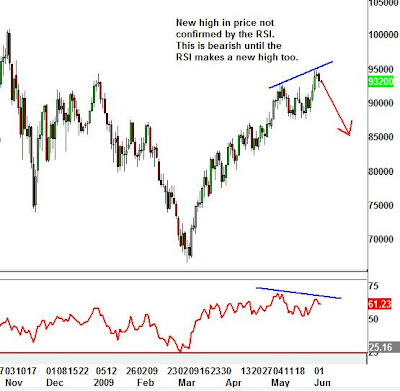 Today's selloff got my attention. Not only was breadth and internals of the market weak with 85% of NYSE volume to the downside, and well over 400 S&P stocks trading down, but gold, silver, oil and the euro did strong sharp reversals today. This was a massive across the board selloff that also appears to be falling impulsively. Also, today's downturn has created a bearish divergence on the momentum indicators with the most reliable one being the RSI (see above daily S&P futures chart).

Although it seems a bit shallow and premature to call the wave 3 underway, it does appear that a great risk/reward trader exists at current levels on the short side. I added 10% more to my S&P short position with the SDS early in this morning's trading. My stop loss for this additional position is just above today's highs (949 in the futures). As long as I'm not stopped out, I will watch the structure and strength of the decline to determine if it's possible wave 3 is underway now, or if this current set back is just a pause in the wave 2 uptrend. Right now, I'd have to say it's the latter.
5 comments:

The stock market appears to need at least one more high to complete a five wave advance at a small degree (15min chart). From there, we'll see what type of decline unfolds to determine if wave 3 down has begun, or just another temporary pullback within wave 2 before it grinds higher toward my target area of 1067 S&P futures. While we wait for this correction to unfold, I thought I'd answer a question by a reader:

First of all I'd like to make a correction. Last post I said wave 3 has to be longer than wave 1. This is not correct according to EWP. According to EWP rules, wave 3 just cannot be the shortest of waves 1 and 5. Usually wave 3 is the longest though.

As for time, it's very speculative and EWP only has "guidelines" for elapsed time, no rules. Ideally, we look for a correct proportion of time in fibonacci sequences relative to the prior wave with the trend. So wave 1 down took 17 months, so the fibonacci time sequences for wave 2 would be approximately:

Anything greater than this would be highly questionable and put the wave 3 scenario in jeopardy; especially because the rally has gone so far so fast.

My original analysis pointed toward the 50% time level around November. However the market has rallied so much so fast, and optimism has skyrocketed with it, I have my doubts this market can hold up that long. Also take into account this is a huge degree bear market we're undergoing, and most bear markets unfold fairly quickly. So it should be of no surprise that this market may be unfolding faster than what is typical for EWP patterns. I think the best timeframe to look for a wave 2 top is sometime between July and November of this year. But again, there are no requirements for time under EWP, so wave 2 can top any day. The key to remember is that the larger longer term trend is down, and I am going to align myself with that trend.

The S&P futures topped in 2007 at 1586.75 according to esignal's data. The bottom occurred this year at 665.75. So wave 1 was composed of 921 S&P points. As I said before, wave 3 can be shorter than wave 1, just as long as it's not the shortest of waves 1 and 5. But ideally, wave 3 is the longest. If this is the case, wave 3 would need to be over 921 S&P points. As it stands now (S&P 945), that would take the S&P into the 20s. Again, time is very speculative, but I would guess that wave 3 down would take anywhere from 1 to 2 years. The alternate view has the upcoming massive decline as a wave C instead of a wave 3. In that case, the only requirement would be that wave C come below the extreme of wave A at 665.75. So to sum up, regardless of which count is correct, the upcoming decline will come beneath 665.75 which is almost 300 points, but can end up well below 100. If the latter were to occur, we most likely wouldn't even be able to profit from it all the way to below 100 because the financial system would not be able to withstand such a horrendous decline like that, and the futures, options, and equity markets would probably become dysfuntional, and average retail traders like us will most likely have our profitable positions liquidated. So the key is to catch the early stages of the wave 3 or C down, and then get out when the government starts getting too involved and when financial institutions literally start imploding. I will be closing my positions and moving to cash, T-Bills, and gold accounts at some point. Then, when the market bottoms, it will bring about the buying opportunity of a lifetime and afford all the sage investors an opportunity to get rich in a short period of time.

So the above analysis is the "perfect world" EWP scenario. But rarely do the markets give us such fortunate results. I'm actually targeting the 400s for my profit taking point. It is a prior congestion area decades back, and it seems to be a good area to start closing short positions and hiding my capital in bomb shelters to protect it from disappearing like what will happen to most people's money, unfortunately.

My best analysis suggests wave 2 will top between July and November of this year aorund 1067. Then a devastating fierce wave 3 will ravage the global markets, taking the S&P to at least the 400s sometime in late 2010, and wave 3 should end sometime in 2011. It's a bit too early to get too specific on that.

I'll post any significant developments or if I get fully short. Right now I'm only have short and am selling options against my position.
No comments: 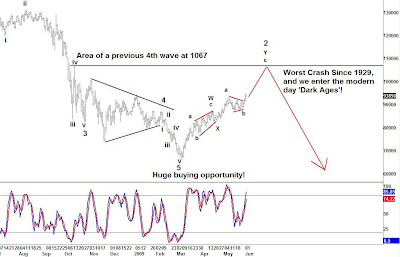 I said in my last post that when a market unfolds too perfectly, it usually is not accurate. This by no means is a pat on the back for myself as I lost money on the trade anyway. The market is exhibiting typical wave 2 characteristics in that:

1) the wave is very sharp and strong; and
2) it's accompanying a social mood that the worst is over and a new bull market has begun.

I had to readjust my daily S&P futures chart to update the projected wave count and path in the coming days. The fact that this rally has only corrected with sideways movements, and small dips tells me that it's quite possible the rally will end sooner than I expected at the end of this year. With the current wave count and sentiment reaching a bullish extreme almost matching that of the bullish extreme met October 2007 when the market toped, it tells me I have to be on high alert for wave 2 to complete and a huge devastating wave 3 down to unfold at any time. Perhaps even by next week! I'm watching closely and will update my blog with any significant changes or important information I obtain. Until then, I expect the market to grind higher toward my target of 1067 in the S&P futures.

Here's a question someone posted to me on the blog that I want to respond to:

Do you think it is possible we are in wave 1 of bull market? Perhaps October crash was wave 3 followed by wave 4 up in Jan and Wave 5 down in March? If you say we are in wave 2 pending wave 3 and wave 3 is longer than wave 1 then we are headed to 100 on the S&P ?

Of course it's possible this is the first wave of a bull market. Nothing is certain. However I think this is a very low probability for several reasons. The most important being that: 1) the rally has been done in overlapping waves that cannot be counted as an impulse wave under EWP which would open the door to a new uptrend starting now; 2) bullish sentiment indicators are almost at the same levels reached at the market top of October 2007, yet today the S&P is over 600 points lower. I can't see a new bull market starting with almost 90% bulls out there and the S&P being only at 950. That's the sign of a major top forming again, not the beginning of S&P 2000; and 3) The EWP I have on the entire bear market decline from October 2007 is a very nice and clear 5 waves down (see "Long Term Stock Market Chart" on the top right side of this blog). With 5 waves down it means that new lows must be achieved to finish the pattern. That 5 waves down has to be either an A wave which means the rally is a B wave, and a C wave will bring us to new lows. Or, the 5 wave decline since October 2007 is a wave 1 which means a wave 3 will come next bringing us to new lows. Either way, the March 2009 lows will be broken, and whether it's a C or 3 wave, both waves are very destructive in their composition according to EWP.

As for the length of wave 3. Yes, you are correct that wave 3 must be longer than wave 1 and it will bring the S&P into the 100s or lower. This is correct, and it is likely to happen with the credit deflation scenario unfolding. When you deal with percentages of declines, not point declines, it will put it into better perspective then. The S&P should be well below 100, and the Dow in the hundreds, by the time this bear market is over. Hard to believe, but that's what the evidence strongly suggests.
2 comments:
Newer Posts Older Posts Home
Subscribe to: Posts (Atom)