This morning I woke up, sat up in bed, scratched my head and engaged in a blank stare at my wall as I tried to wake up.  I then grabbed my iPod to see what the markets were doing and when I saw what happened it felt like this.....

I shouldn't be surprised at this since I've come out and called for sharp selloffs the past few months and probably each time the market has made a fool out of me.  Looks like my bearish calls have become quite a contrarian indicator.  I'm going to change that though. 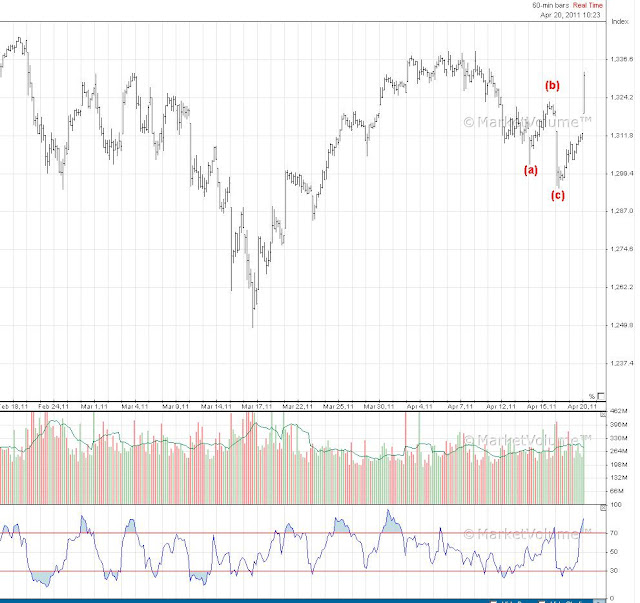 With today's rise above 1322.88, the move down earlier this week is a clear 3 wave drop.  So the simplist interpretation, which is what I usually follow, is that it was just an ABC corrective decline and the market should be resuming its uptrend now. 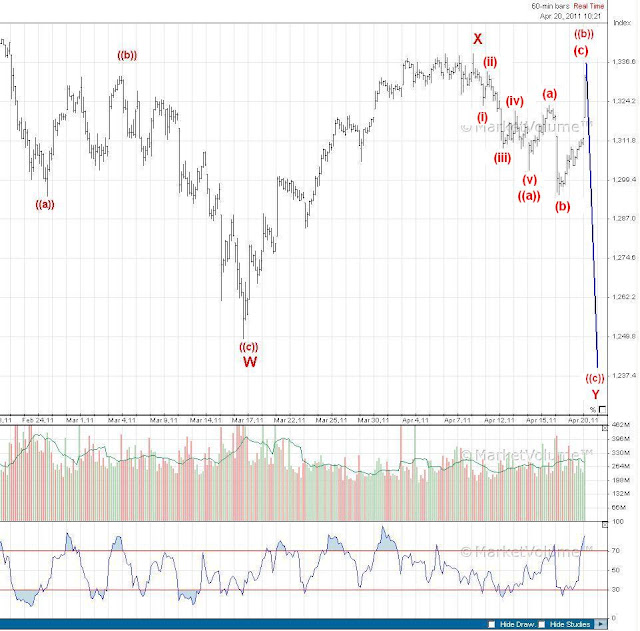 But not so fast bulls, the bearish count is still intact technically.  The 3 wave decline may just have been a very small wave ((a)), and now we're in wave ((b)) which took the form of a "flat correction".  Once complete, the market should then undergo a large wave ((c)) down as part of the larger wave Y of the "combination" correction I've been tracking. 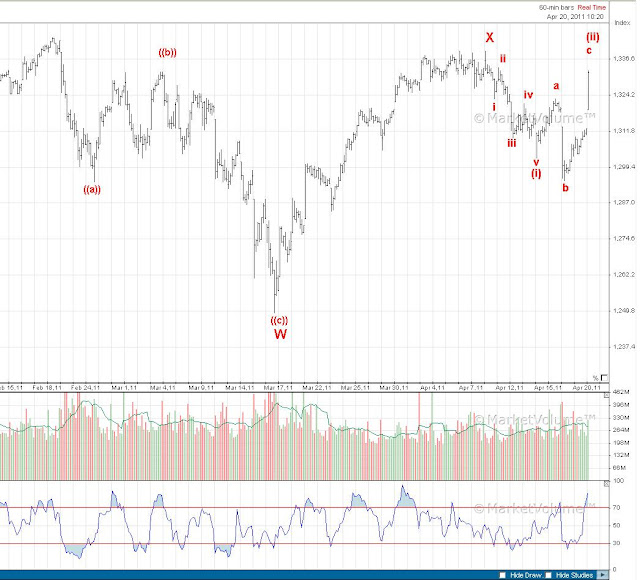 The next possibility is that the impulsive wave count is still intact and the funny shape is just a "flat correction" after wave (i) completed.  I don't like this count that much because the flat correction is quite long and deep, which is unlikely for a flat correction.  Although it's still possible so I'm keeping an eye on it. 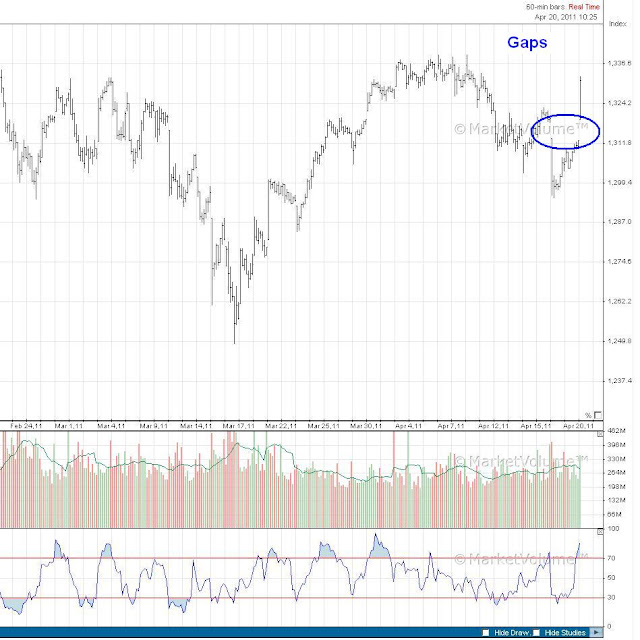 Today's gap up formed what would normally be an "island reversal" but since the S&P was not in a confirmed downtrend we can't say that is the case.  However it is interesting that we have a down gap and up gap in the exact same spot.  If the bears don't drop this market soon and close the upward gap from this morning, I'd say that would be a very bullish sign for the days ahead.

So I was slapped by the market today and we are left with several options.  I like to choose the simplist of outlooks because that's usually the correct one, which is that this week was simply an ABC decline and now the uptrend has resumed.  The other options I mentioned are certainly still a possibility and any sharp reversal this week will probably move this bearish counts up on the probability chart.  So I'm just a spectator now.

Now if you'll excuse me, I'm going to play in traffic for a little while.....

PLEASE NOTE: THIS IS JUST AN ANALYSIS BLOG AND IN NO WAY GUARANTEES OR IMPLIES ANY PROFIT OR GAIN. THE DATA HERE IS MERELY AN EXPRESSED OPINION. TRADE AT YOUR OWN RISK.
8 comments: 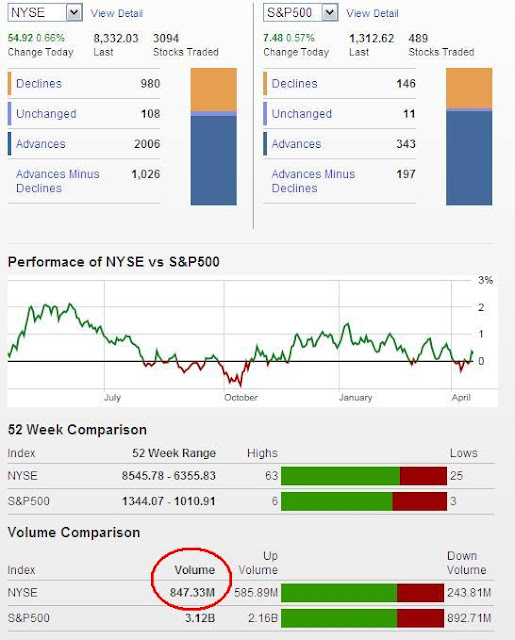 Stocks rallied most of the afternoon but again did so on very light volume.  The bulls still haven't come close to taking back what the bears accomplished in just an hour or two yesterday on high volume suggesting the larger trend remains down.  Once this light volume float higher ends (short of 1322.88), the market should undergo more sharp declines to new lows.  I remain bearish as long as the S&P trades below 1322.88.﻿ 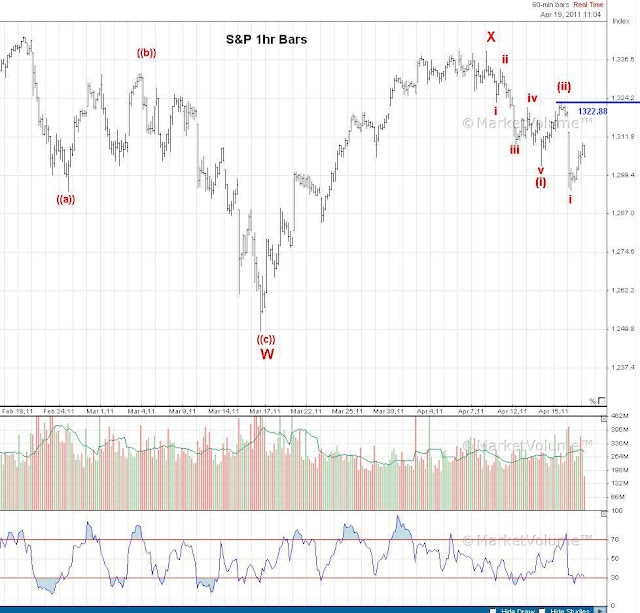 (POST THIS MORNING) Stocks trading very heavy.  Yesterday the bulls did everything they could to push this market out of the red from that deep early morning selloff but they didn't even come close with the Dow still closing triple digits on the day with very bearish internals.  Now today, again the bulls are pushing hard to get this market out of the gutter and so far are failing to do so.  This tells me the headwinds the bulls are facing here are very strong and that they will lose the fight to push this market higher.  It's like those old cartoons when the guy lifts something heavy over his head and his little legs are shaking rapidly as he tries to keep the weight up.  Well, the bulls' legs are shakey here.

Look for this bull attempt to fail well short of the 1322.88 level.  As long as the S&P stays below that level, I'm bearish.  There is good potential for large gains on the short side here in my opinion. 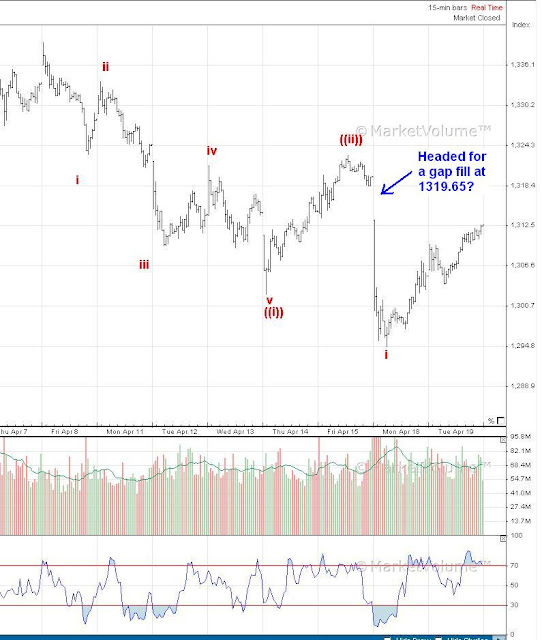 The above S&P chart shows the open gap left from Monday's big drop.  Stocks may attempt to close that gap at 1319.65.  But since it would be so deep and so close to the wave ((ii)) stopping level I'm not sure the bulls can accomplish a complete close.  Once the market moves into that gap area at all, be prepared for a sharp reversal at any time.  Playing reversal bars or reversal volume plays on the intraday charts may be a wise move tomorrow since the wave count suggests a big sharp decline coming soon.

Euro is bouncing along with stocks, once complete it should fall sharply as well.
PLEASE NOTE: THIS IS JUST AN ANALYSIS BLOG AND IN NO WAY GUARANTEES OR IMPLIES ANY PROFIT OR GAIN. THE DATA HERE IS MERELY AN EXPRESSED OPINION. TRADE AT YOUR OWN RISK.
2 comments:

Wave (ii) is Over, Wave (iii) Down Now Underway 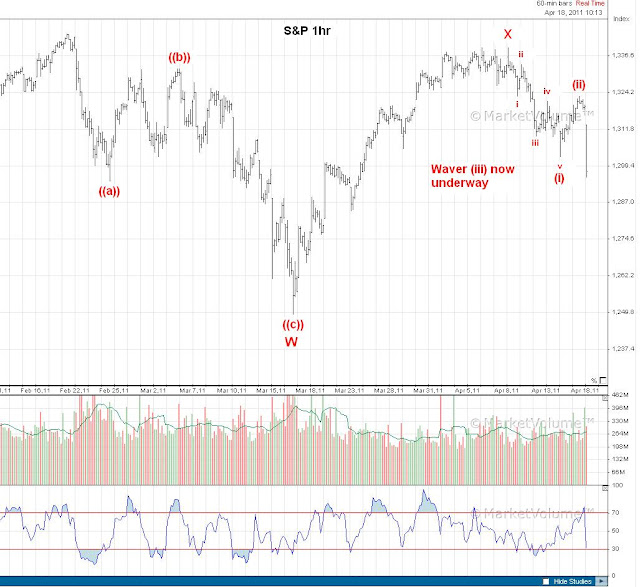 Wave (ii) was quite shallow and short, but that was probably a hint as to how strong the downward pressure is on the market.  Today's breakaway gap and sharp selloff is indicative of a 3rd wave.  And since we were expecting a Minuette wave (iii), this fits well within my wave count I've been tracking lately.  Expect lower levels in the coming days/weeks.  Risk should remain just above the wave X high. 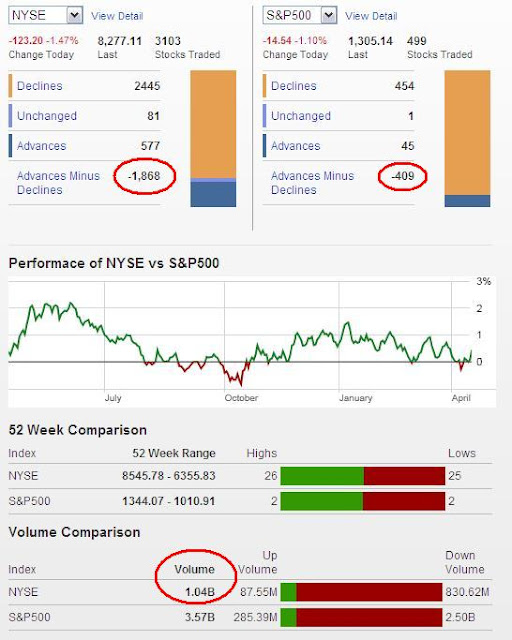 Just a quick addition to this morning's post: the market sold off hard today and spent the rest of the day floating higher.  But it still closed solidly lower.  And the move down was much stronger than the weak float to the upside, and overall volume and internals that include the move higher were still quite bearish as you can see above.  Volume finally spiked above the 1 billion share mark on the NYSE, but still quite short of my 1.2 billion share mark I'd like to see on a down move.  All-in-all though, with the wave count looking bearish and internal weakness accompanying it, this market looks bearish here for the short term at least.  That doesn't mean we won't see some pops here and there along the way, but the series of lower highs and lower lows should continue in the coming days. 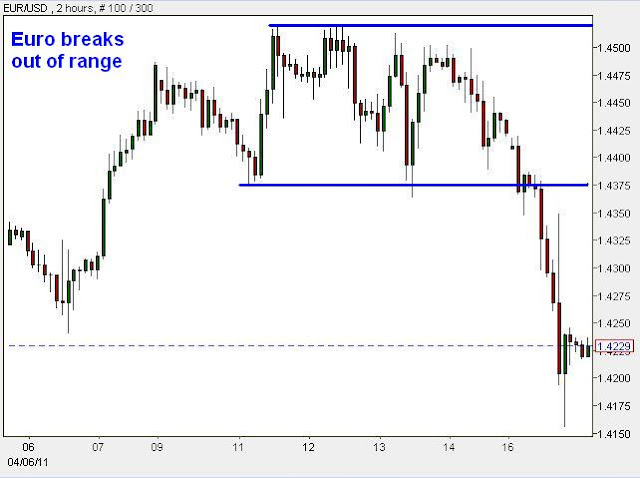 The dollar broke out of its range and it did so to the downside as I suspected it would.  With sentiment at an extreme before the decline, and the long standing momentum divergences we've seen in the RSI over the past few weeks, the euro is certainly poised to continue lower from here.  I'm short and remain short.