Bulls Making a Run - but on No Volume 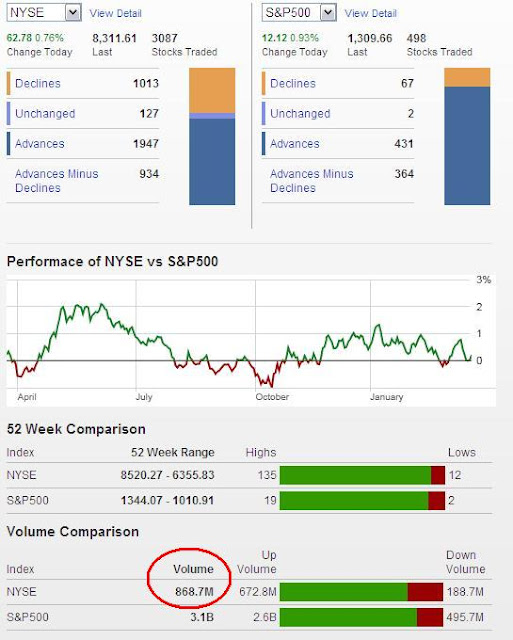 The bulls are still making a go at pushing this market higher and have obviously been successful doing so the past few days.  Today the S&P did not break below my key level ﻿I mentioned yesterday at 1284.05, so I remain neutral.  The series of higher highs and higher lows remains intact therefore so does the uptrend.

Despite the bulls seeming to be in full control of this market according to the price action, they are doing it on very light volume, and almost every day the market moves higher while volume moves lower.  This diverging behavior is bearish and suggests the market will give way to a big downside move once volume re-enters the market.  Now tomorrow is a Friday so I doubt we'll get a lot of volume then, so the market may float higher to fill the gap at 1320 which I mention in the below paragraph.  But be aware of any news data that may hit the wires tonight and early tomorrow morning.  Despite it being a Friday, this market is poised to fall hard once volume re-enters the market and a big news event will probably bring that volume in whether it's Friday or not.  Coming below 1284.05 would instill great confidence that a top is in, and/or big volume with a sharp move lower would do so as well.  But until then, I'm waiting on the sidelines. 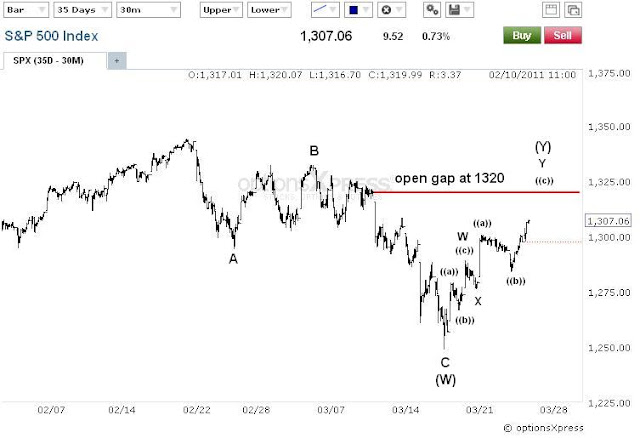 The bulls are making a strong charge to push the market higher with a convincing day to the upside so far today.  There's an open gap at 1320 the S&P MAY work its way toward closing before topping.  The current wave is a ((c)) of Y of (Y) which would explain the strength today since C waves are similar to 3rd waves in strength.  With no signs of a top and reversal, I don't want to get in this market's way right now.  But I'll keep my eye open for reversal signs near that gap level at 1320 and/or a big reversal sometime today as well. 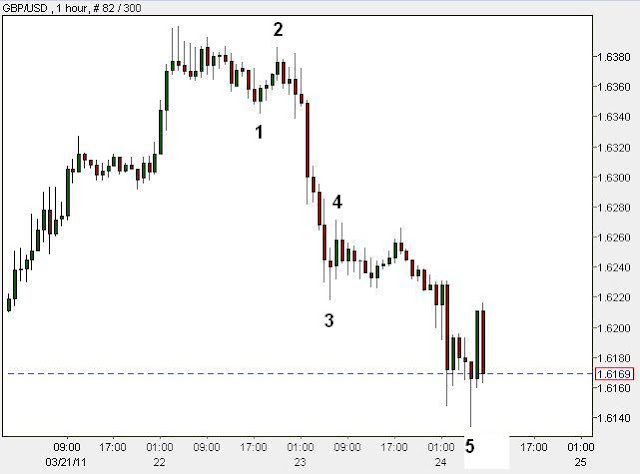 The euro surged higher with stocks this morning, failing to complete a clear impulsive decline.  Yet the british pound has completed an impulsive decline vs the USD.  So it's possible the pound has topped and reversed while the euro needs to make one more small high before topping.  I'm short the euro right now but the british pound looks good getting short if we get a big bounce from this 5 wave decline soon.  Either way, I'm looking to get long the USD (short the GBP or EUR) when opportunity arises.

PLEASE NOTE: THIS IS JUST AN ANALYSIS BLOG AND IN NO WAY GUARANTEES OR IMPLIES ANY PROFIT OR GAIN. THE DATA HERE IS MERELY AN EXPRESSED OPINION. TRADE AT YOUR OWN RISK.
7 comments: 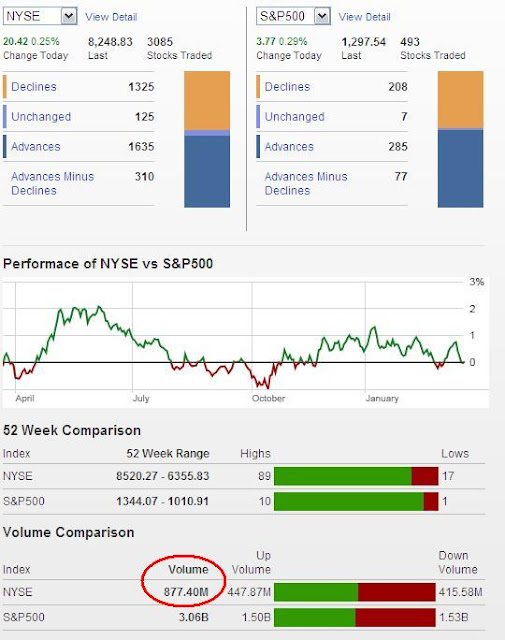 Internals today tell us that something bearish is just over the horizon. As this rally has progressed the past several days, volume has gradually decreased, suggesting a lack of enthusiasm and confidence in the move higher. Recall that the selloffs over the past couple months have been accompanied with volume well above 1 billion NYSE shares, usually around 1.15-1.20 billion. Today had a weak 877 million shares traded with advancers vs decliners and up vs down volume also suggesting a weakened move higher. The internals shown during this recent rally, and what we see today, suggest that this market is about to reverse sharply to the downside.

Don't get caught running with the herd – learn to think independently by downloading the Independent Investor eBook FREE! 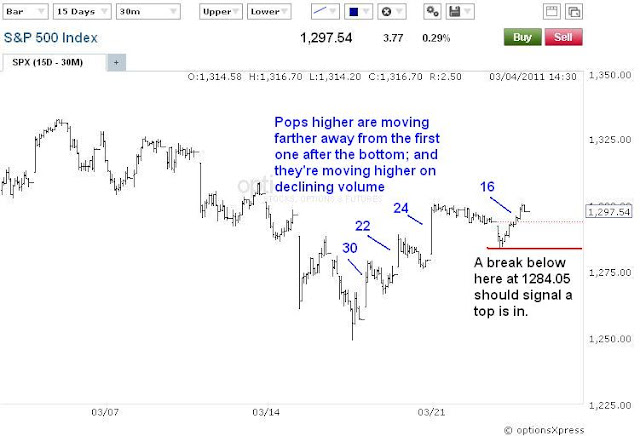 This chart shows that the S&P’s momentum never really got off the ground. Not only are the waves clearly overlapping, the typical characteristics of a correction according to EWP, but the original 30 point rally from the bottom is the best it could muster up. The rallies haven’t even been close to that 30 point rise, and when you factor in that volume has also decreased steadily during this rally off of the 1249.05 low. It’s clear the market wants to move lower and that the recent uptrend is just a correction. A break below 1284.05 would break the trend of higher lows and give us a good signal that a top is in and that we should favor the downside when trading. 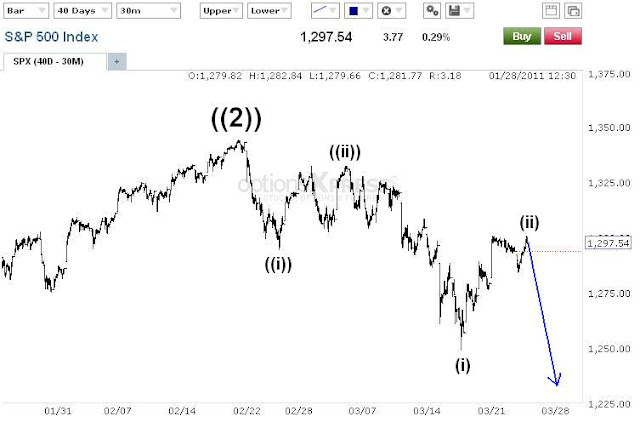 Above is an aggressive bearish count suggesting Primary wave ((2)) has topped and that an impulsive decline is developing. The reason I’m not in love with this count is because it doesn’t adhere to the EWP guideline of the “right look” in regards to proportionality. Notice that Minute waves ((i)) and ((ii)) are smaller than Minuette waves (i) and (ii). Having waves at a smaller degree bigger than the same waves at one larger degree is not typical in an EWP pattern. It violates no EWP rules, so it remains valid, but it does violate a major guideline in my view so I’m cautious in getting too attached to this count. An extremely sharp move lower would strengthen the odds of this count being correct since it would fit in well with a Minuette wave (iii) wave getting underway as the count suggests. 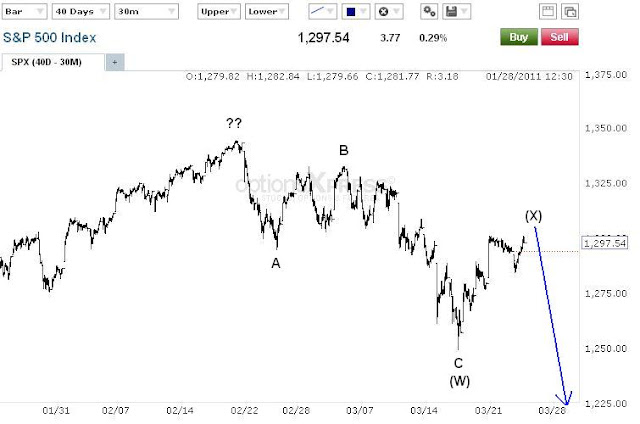 This count makes more sense to me. It explains the lack of proportionality I mentioned above, as well as the imperfect nature of the decline relative to an impulsive structure. But even though this is a corrective structure, it also shows a sharp move lower coming soon. So either way you slice it, the internals and both top wave counts suggest a top and reversal to a new low are coming soon. 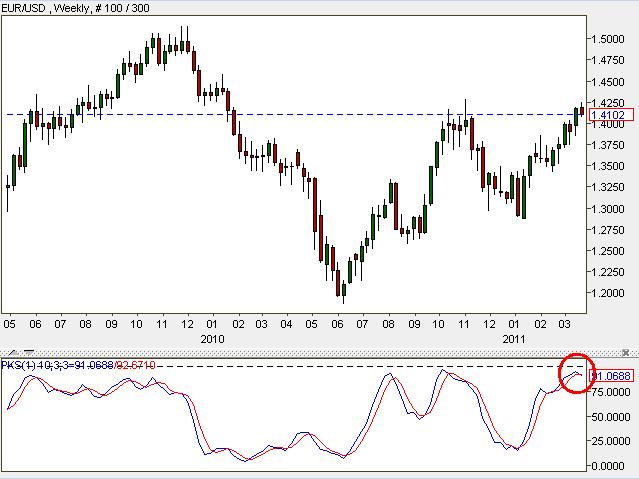 The euro has failed to make a new high as I thought it would. The US dollar did make a new low though so I took that as a new extreme for the EUR/USD pair in general, but instead there is a divergence in place between the USD and the euro which has significant bearish implications for the euro and bullish implications for the USD. Today the euro is breaking down a bit, and with that USD divergence in place, it could be the start of something big. Also note that the stochastics on the weekly chart are overbought and crossing down. So this pair may be gearing up for a major sustained decline. If so, I want to be on board this train to funky town. In other words, I want to be short this pair, like right now, with a stop at 1.4255.

No Post Tuesday - Nothing Has Changed From Yesterday's Outlook

What are Stocks Doing? Euro to Break 1.4281 Anytime Now 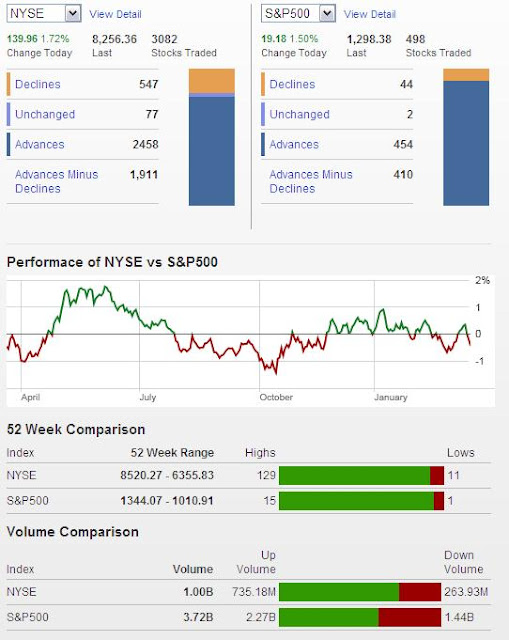 I just wanted to add the internal data to today's market.  You can see that the bulls had pretty good control of momentum, but far from stellar.  Volume was just shy of the 1 billion share market on the NYSE.  And if you remember, or look at my internals postings the past couple weeks, the bears got volume well above 1 billion shares during selloffs.  So volume lightens up on rallies and increases on declines, a bearish behavior.  Advancers vs decliners was strong today but up volume was only about 74% of total volume, so again not a stellar performance from the bulls on today's big surge.

Although I'm not convinced yet this is an impulsive move lower, it's still quite possible that this is at least a WXY correction lower with wave X completing now, and wave Y down will be getting underway shortly to below 1200 on the S&P. 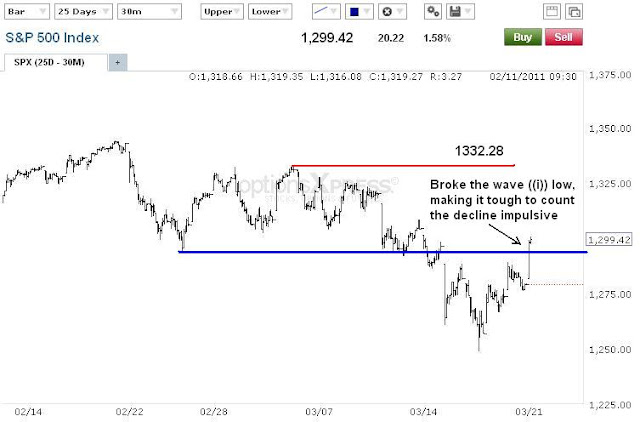 The S&P broke the proposed wave ((i)) at 1294.26 this morning, making it less likely that an impulsive wave down is forming.  It's possible a series of 1s and 2s are unfolding, but I usually don't put money on that since it's usually just an excuse wavers use to label a correction as an impulse.  But as long as 1332.28 stays intact, it remains possible it's just a series of 1 and 2 waves unfolding.  So I'll watch it, but won't trade on it quite yet. 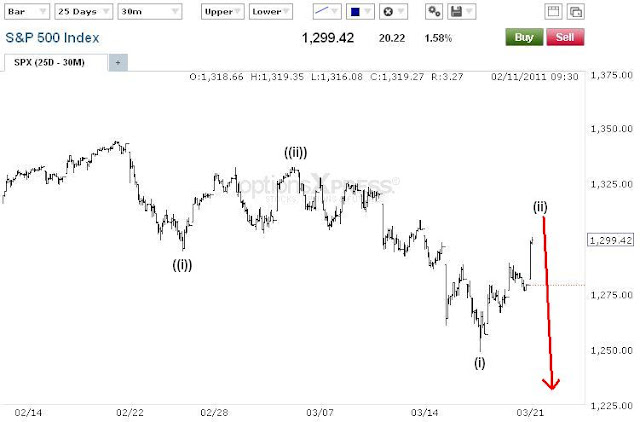 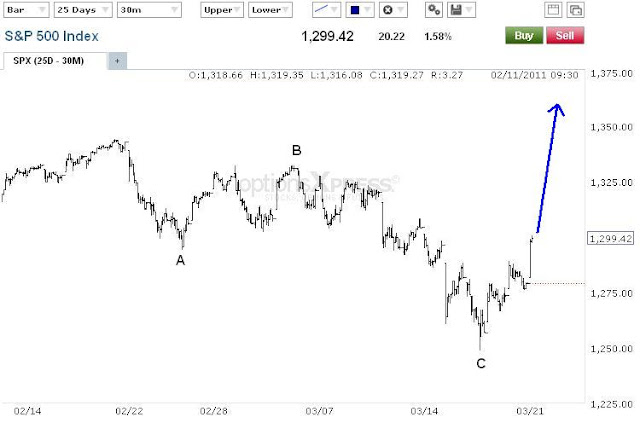 With 1294.26 broken, and then taking the above chart at just face value it looks clearly like an ABC 3 wave correction.  I do think this is probably what's taking place now however I'm not convinced the correction is over.  If anything I think we're in an X wave rally and then another ABC decline will ensue taking the S&P below 1200.

To be honest, of both these counts, I'm really not sure which is correct.  So I'm neutral here, waiting for more evidence of the medium term trend. 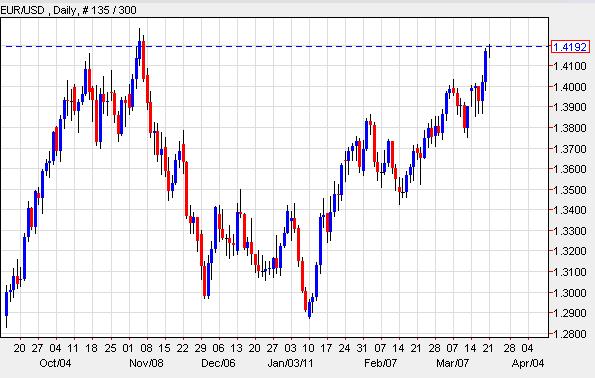 The euro's decline from 1.4281 never looked impulsive to me so I didn't label it as such.  In the short term I saw some 5 wave moves so I focused on those only.  I know a lot of wavers were labeling this as a 5 wave decline somehow, and perhaps it was because some of the other majors had cleare structures, but to me that's like shoving a round peg in a square hole.  Sure you can cram it in there with enough force and cleverness, but it doesn't really belong there.  Looks like I was right in that respect, but I was wrong in trying to short based on short term moves.  At this point it's quite clear the euro is still correcting higher on the long term count, and a break above 1.4281 should be coming real soon.  From there, we can then look for another real top and reversal.

PLEASE NOTE: THIS IS JUST AN ANALYSIS BLOG AND IN NO WAY GUARANTEES OR IMPLIES ANY PROFIT OR GAIN. THE DATA HERE IS MERELY AN EXPRESSED OPINION. TRADE AT YOUR OWN RISK.
4 comments:
Newer Posts Older Posts Home
Subscribe to: Posts (Atom)