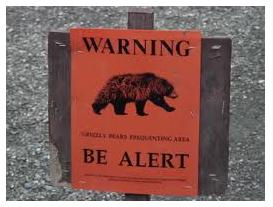 Price action today in the S&P and the euro suggest a possible bullish reversal just took place which might act as a floor for these markets for at least a few days. 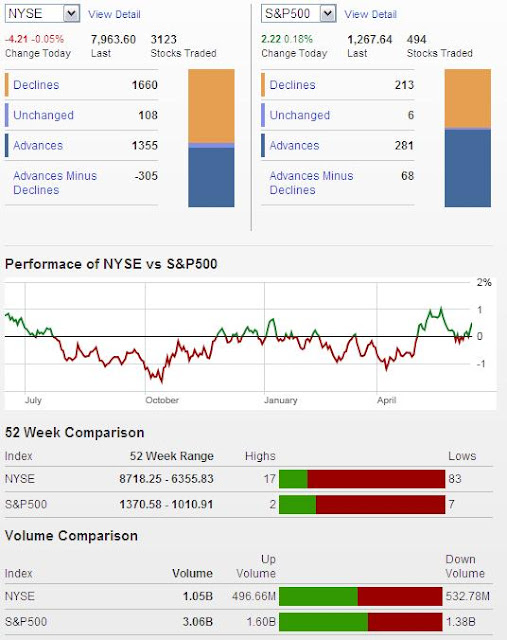 Volume was solid today, similar to yesterday's, only the internals were flat as the market seemed a bit confused today.  But with a strong rally at the close, at the moment it's sending up flags that the bulls might have regained control of the market for now. 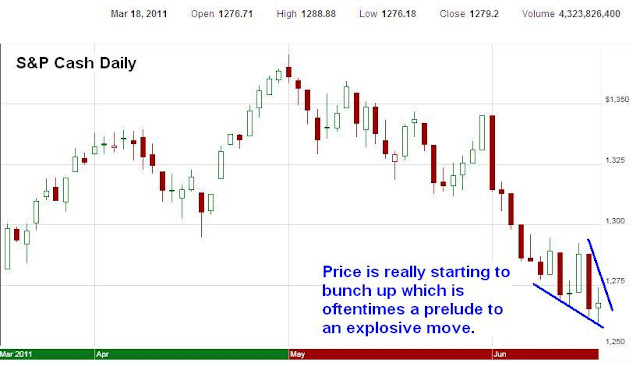 Seeing this ending diagonal-ish looking structure here in the daily S&P chart is not encouraging for the bears.  The "bunching" up of price usually occurs before a very big and sharp reversal.  We may get some more choppy downward movement for a few days but at some point this market will give.  There will be a very sharp move to the upside or downside judging by the structure developing.  And right now I'd guess that the move will be to the upside since it usually precedes a reversal, but either way, be prepared for a sharp move.  Taking profits on some aggressive short positions might be wise if the overnight session holds firm or rallies big.

Six Straight Weeks of Decline Take DJIA Below 12,000: What Now? 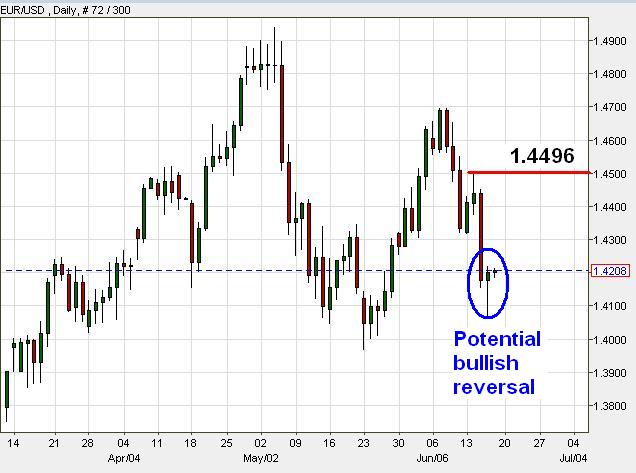 The euro is not my friend today either since it put in a potential daily reversal candle itself.  This sends up the warning flags to me and had me put a stop at 1.4496 on my short position.  A move above that level will make the recent decline a 3 wave move, which is a correction, and imply new highs are on the way.  So any movement above that level means I shouldn't be short.

Stocks Working Toward 1250 Support; Euro in 3rd Wave Down 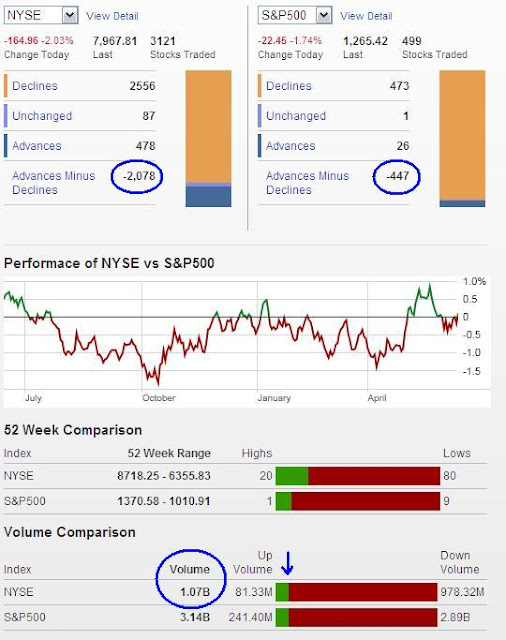 Internals today were solidly bearish.  Everyone was a seller today, and all day.  Yesterday's rally was a sucker's rally.  No capitulation, no bottom.  Volume even picked up a bit today after yesterday's big move higher.  The bears remain in control.

Below is what I posted this morning: 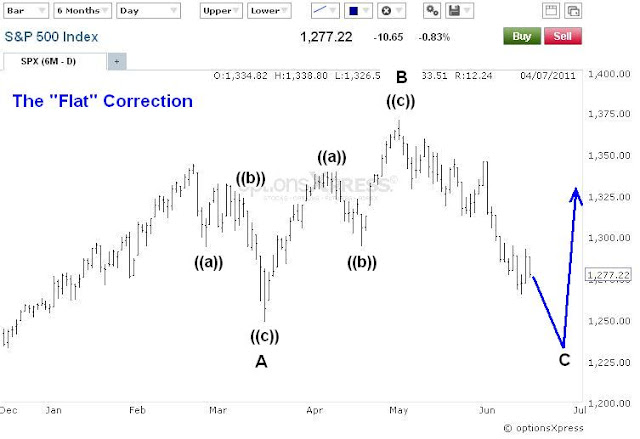 The S&P relieved some of the oversold measures with yesterday's rally.  I'd have liked to see another day or two of relief rallying to have a better feeling about harder selling ahead but so far it doesn't look like it will do that.  The S&P seems poised to continue toward the 1250 level I've mentioned before.  Right now we just have a series of 3 wave moves all over the place so I'm counting this decline as a correction at the moment.  The behavior of the S&P around the 1250 level and the wave count that develops at that time will help us better assess the bigger picture potential of the decline.  But right now, I'm just targeting 1250 in the S&P. 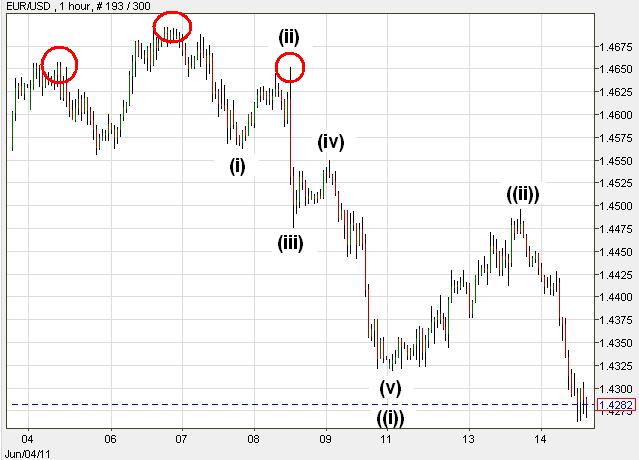 The euro's wave ((ii)) bounce was short lived as a new low was established in today's trading.  All signs point to a large sharp move lower being underway in the euro as wave ((iii)) down gets firm control of this pair. 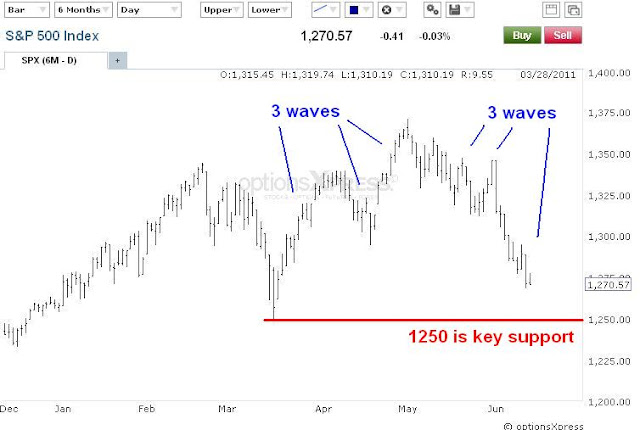 The S&P has completed a 3 wave rally to a new high, and has so far only completed 3 waves down from that high.  Volume and intensity on the decline are a bit tepid so I'm still concluding that this current weakness is just a correction of a larger bull move higher.  That could change though with some sustained sharp declines with increasing volume and bearish internals.  But right now, the market is in a temporary downtrend that doesn't appear over quite yet.

The best guess here is that the market is unfolding in a "flat correction", which is derived from the 3 wave rally to a new high.  According to EWP, this type of behavior lends itself to flat corrections.  So that means a 5 wave decline for wave C within that flat correction is underway now.  So the market should hit, and perhaps slightly exceed, the 1250 level before bottoming.  The action surrounding 1250 will be important to the bigger picture.  A sharp reversal and rally near that level will make it probable a bottom is in and that the market is on its way to new highs on the year.  But if the market accelerates the downtrend and drops significantly through 1250, it may mean a bigger decline is underway than expected.  So I'm watching the action around 1250 closely. 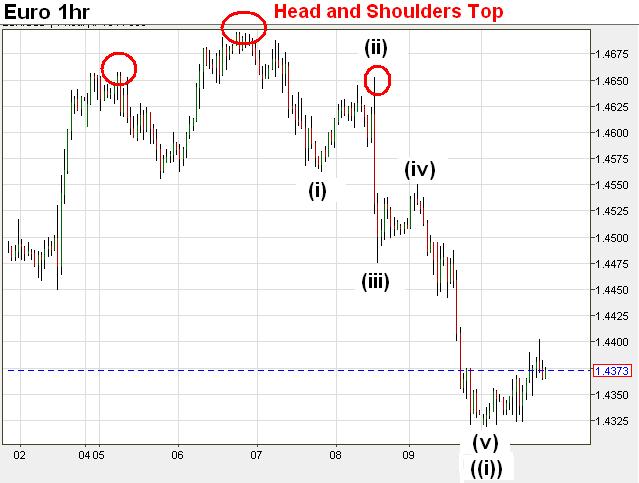 The evidence of a major euro top is strong.  Normally when I say that though, I'm proven wrong shortly afterward.  But the evidence speaks for itself.  Momentum diverged on the final push to a new high, then a head and shoulders pattern formed, followed by a 5 wave impulsive decline.  So the evidence is strong a major euro top is in, and any sharp rally that occurs I'd see as an opportunity to get short, or add to existing short positions.