Everything Still the Same, Wave 3 is Approaching Soon; August 8, 2009

Friday's big rally changes nothing to what I've said earlier. In fact, because the market has not pulled back to relieve the overbought condition for quite some time, it makes it more likely that wave 3 will start sometime by mid-September instead of it starting in the Nov-Dec timeframe as previously expected.

I remain half short with options dated well out in advance and will add to those positions as the S&P approaches the 1100 level. I currently own puts on the following: 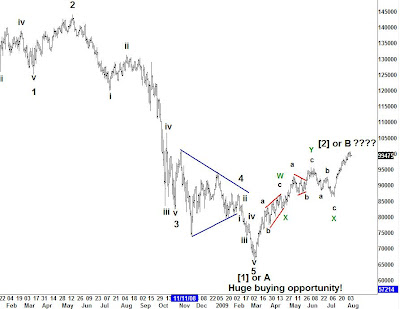 The market has reached a crucial point and all signs are pointed to a decline of significant magnitude either right now with the high in place at 1007.75 in the S&P futures, or that it will do so in a couple weeks most likely. Right now, the Nasdaq indices have lagged the blue chip Dow and S&P indices almost all week. The Dow and S&P made new highs yesterday and today while the Nasdaqs have not. This is an aversion to risk, which usually occurs at major tops. Also, NYSE breadth has been funky yesterday and today with more up volume than down volume but there were a lot more decliners than advancers. This all tells me the market is fractured and weakened. This may all resolve itself with a sharp rally higher after tomorrow's jobs report, but the evidence now suggests that a major top may be in place and I can short aggressively against the high established today at 1007.75 S&P futures.

Many other markets and sentiment indicators are lining up for a major selloff as well. Although I still think the market will rally close to the 1100 level before wave 2 ends and wave 3 begins, the market always fools the masses and surprises us. So I want to be ready for wave 3 NOW. Sentiment is at an optimistic extreme as measured by various technical indicators as well as just watching TV. The president has pretty much taken credit for an economic recovery, most TV talking heads are bullish and the only question is "how fast will this new bull market move", and everyone suggests buying on dips now. These are all signs of a major top at hand and positioned accordingly:

I'm buying longer term (June 2010 and Jan 2011) put options on the SPY, QQQQ, XLF and the SLV well out of the money. The reason is that if the market falls now just temporarily, I'll make money and take profits. But, if the market rallies from current levels in the coming week or so, then I know that wave 2 is in its last stages and wave 3 will begin shortly causing a catstrophic collapse and putting my options well into profit. So buy buying far out put options, I'll either profit from a short term decline now, or from a massive collapse over the next several months.

I only used half of my available capital so if the market rallies or moves sideways I can add to the positions accordingly.
3 comments:
Newer Posts Older Posts Home
Subscribe to: Posts (Atom)