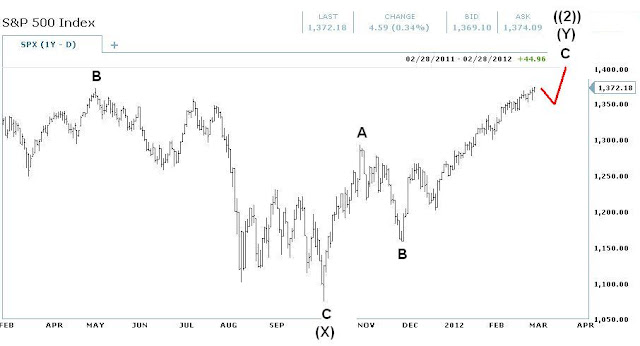 I haven't posted anything in a while because there was nothing new to add from my last post.  The market has continued the slow grind higher with no clear signals to establish a tradable position in my view.  But this week the S&P confirmed the Dow's new high, which is a significant event, and therefore the reason I'm writing today.  The major bearish setup was that the Dow made a new high while the S&P did not, so any sharp downturn would be a great signal for the bears to jump in short for what could have been a major selloff.  But that setup was negated with the new high.  It means again, wavers were wrong in calling Primary wave ((2)) complete, and again we have to look higher and continue stretching out the count.  It has been tiresome and frustrating to say the least.

Although I have not taken a position for quite some time since I thought the best move was to get short when opportunities arose.  But the fact that I missed this long gring higher frustrates me.  Again, I find myself standing on the sidelines with no position, simply waiting for an opportunity to get short.  It won't be easy at this point.  I expect volatility to pick up when a top starts forming, and most likely at least one fakeout will occur.  So I'll remain disciplined and keep risk tight when trying to catch a top and short this market.  But for now, it's a waiting game.

Don't forget to take advantage of free forex analysis from EWI until tomorrow! 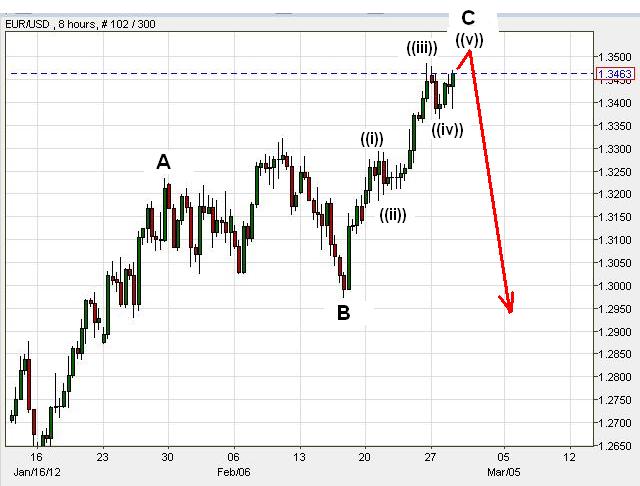 The euro's correction seems a little more clear now.  It's completing a Minor A-B-C corrective rally with wave B tracing out a nice flat correction, and wave C tracing out a nice impulse pattern with a wave ((iv)) down and wave ((v)) up to complete the entire corrective pattern.  Once we get a new high, I'll be looking to get short this pair on any reversal pattern.  Stocks MAY follow soon after.