S&P Set to Drop; Euro to Follow at any Time Now 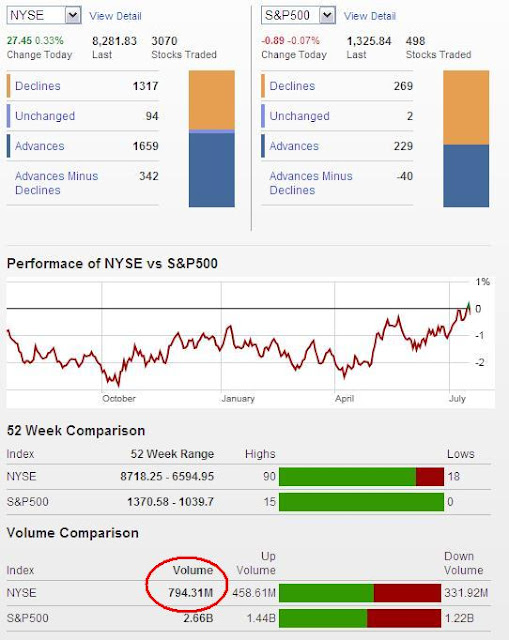 The S&P's big move yesterday had no follow through today, and volume was at a pathetic 794 million NYSE shares.  Not what I'd expect on a Wednesday after a big rally the day before.  But the bears have failed to come in and control this market as well.  At the moment, the bulls look tired and are having a tough time getting volume in on their side with a sustained rally.  This could spell trouble for the bulls the rest of the week, if not longer. 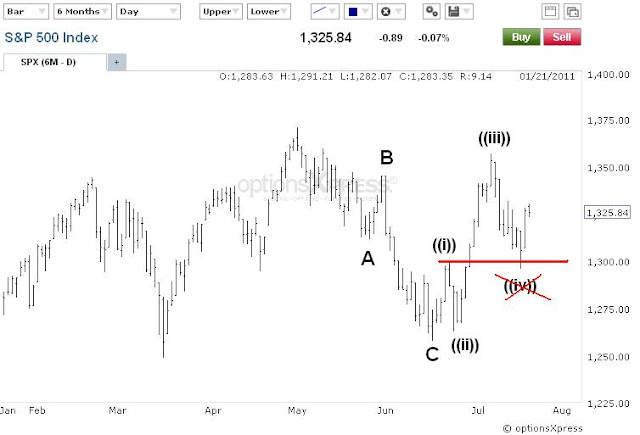 I was tracking a 5 wave rally count that had recent weakness as a wave ((iv)).  But Monday's decline overlapped wave ((i)), violating an EWP rule and therefore rendering this bullish count invalid.  So we have more overlapping waves on our hands, making me conclude we're probably in some type of flat or triangle correction.  The other conclusion is that a much larger top is forming, and all the diverging behavior between indices and sectors along with sloppy overlapping price action is all just part of a large topping process.  Too early to tell right now, but it's definitely on the radar. 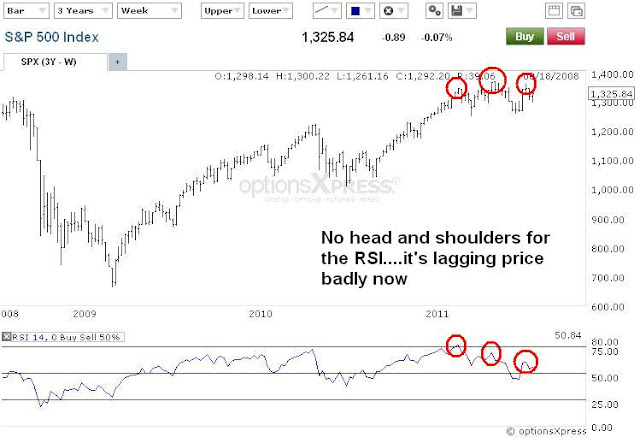 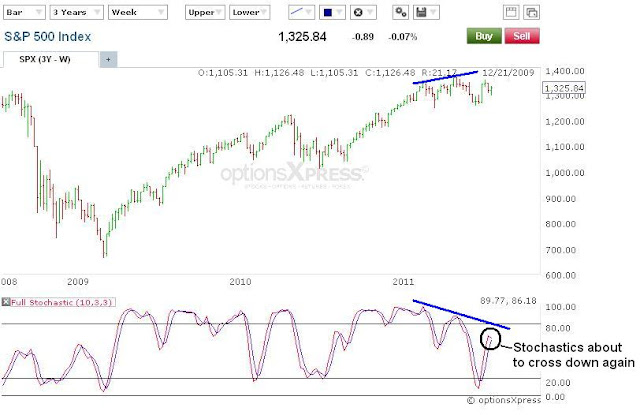 Weekly momentum is not showing a bullish picture.  Looking at the RSI compared to the S&P's head and shoulders pattern you can see that the new high (the head) was not confirmed by the RSI.  Then the right shoulder on the S&P exceeded the left shoulder while that move in the RSI left a peak well under that of the left shoulder.  This, along with the bearish stochastics on the weekly chart as well, gives us more evidence to support that a head and shoulders top may completing, and the next big move will be to the downside.

Also of note is that the Nasdaq was much weaker today that the Dow and S&P.  Intel (INTC) closed slightly down on the day but posted a solid earnings report after the closing bell, yet shares are down over 2% after hours at the time I'm writing this.  The mood seems a bit sour in the market right now.  Watch for a sharp decline soon in the overall stock market.  How far or long it will last I don't know, but the market appears grumpy right now.

Nothing has changed for the euro.  I'd still be cautiously short against 1.4577.


The Personality of Stock Market Waves

Elliott waves don't merely reflect prices plotted over time. Each wave has its own "personality." Listen to this video by EWI's Wayne Gorman to learn more about the psychology behind the waves and how it affects your investment decisions.


This video was taken from the free Club EWI video series: Learn the Why, What and How of Elliott Wave Analysis. This 3-video series is a great way to get started with the Wave Principle. You can get these videos free with a Club EWI Membership.
Watch your free videos now

Already a Club EWI member? Access the video series Learn the Why, What and How of Elliott Wave Analysis here

Blogger isn't letting me upload my charts right now so I'll just have to give a short description of today's action: 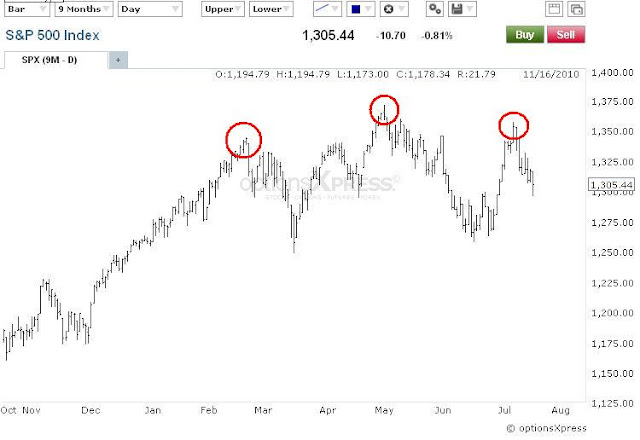 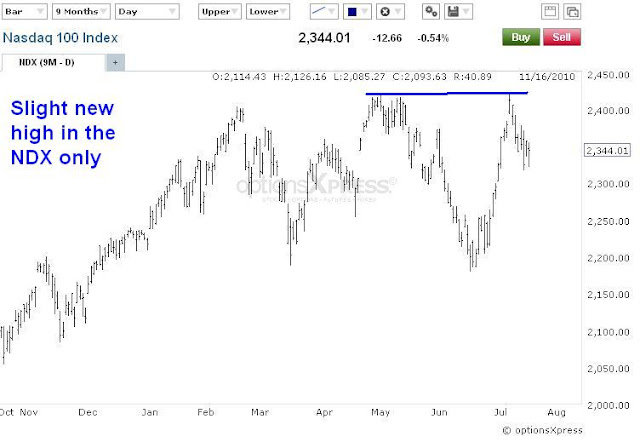 The internals today were slanted heavily on the bearish side despite the late day comeback in stocks.  90.6% of total NYSE volume was to the downside and there were 2,569 decliners and only 446 advancers.  But volume overall was very light at only 871 million shares traded.  Not typical of a large 3rd wave down starting as some wavers may be leaning towards at the moment.  That's not to say they're wrong, I just don't see the evidence here.  First you have a 3 wave decline from the high on the year, then it flip flopps around on light volume......that doesn't seem like a big 3rd wave kick off, but we'll see.

Excluding the wave count, the bears can hang their hats on two things in my view:

1) the S&P has formed what looks like a head shoulders top on the daily chart.

2) the Nasdaq 100 has diverged from the rest of the major indices and made a new high on the year and that divergence has now been in place for several days, often a subtle indicator of a trend reversal in the overall market.

So the wave count and internals don't support a big decline is starting right now while basic techincal analysis does.  With an indecisive and unclear market structure, I choose to stand aside until things clear up a bit. 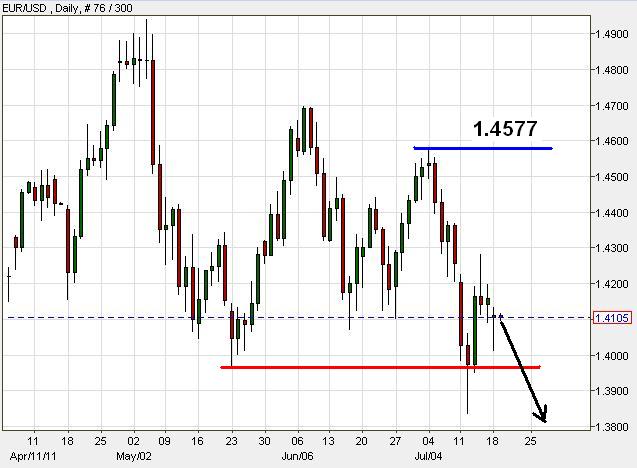 As for the euro, it's not behaving like I'd expect a 3rd wave to behave so I'm skeptical of my big bearish call.  But on the daily charts you can see it made a new low and hasn't bounced much since doing so.  So I'm still leaning toward the bearish side in the short term at least, as long as 1.4577 is not broken.