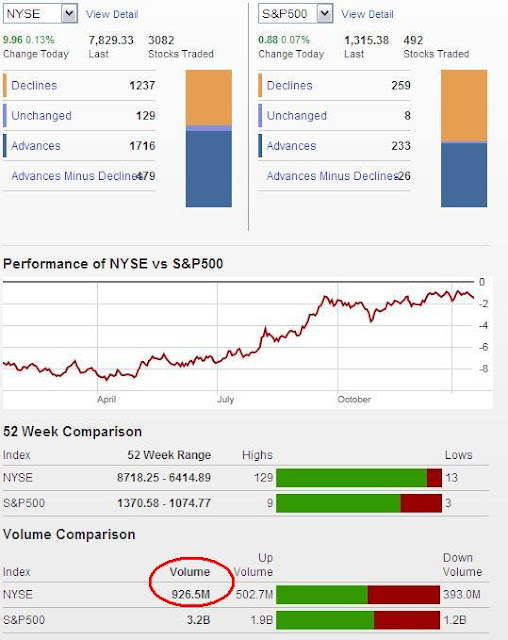 Wake up everybody!  Wake up!!  I know the market is boring right now but we have work to do :-)  The market has continued it's slow boring hump higher on weak internals and volume.  Although this can continue even longer, the risk right now is with the bulls in my view.  Momentum indicators are overbought, volume refuses to accompany the rally, and the price action is very choppy.  All spell out that when this rally ends, the move down will be sharp, fierce and probably quite deep.  Today's volume was a bit strong relative to the previous days, but that's because today was options expiration day which usually means we get a surge in volume.  But relative to most options expiration days the past few years, today's volume was very light.  We usually see well over a billion shares traded on options expiration.

When you're a bear and growing impatient with a sloppy rally, we can tend to over-analyze every little thing on the bearish side and read too much into it.  I don't want to do that here.  But it's worth noting that the overall market today was fractured with the Dow doing quite well, the S&P barely eeking out a gain, and the Nasdaq closing slightly negative.  With options expiration out of the way, and the evidence of a weak rally the past few weeks, it's quite possible early next week could be the pullback we've been waiting for.  Timing is very difficult, as you can probably see from the last few posts I've put up which practically say the exact same thing.  So I simply want to be ready for a decline, but not be positioned as if the decline will immediately occur.  This choppy sideways-to-up action can continue for a while longer.  So keeping risk tight, and my finger on the sell trigger seems like a wise choice at this time. 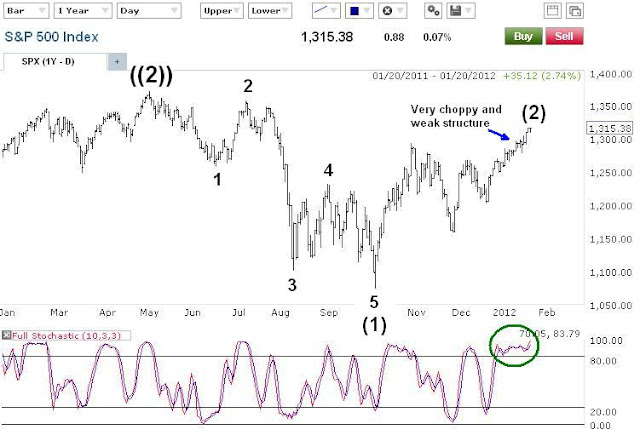 If all I had were elementary indicators like the overbought stochastic and a fractured Friday market to tell me the market is topping, then I might as well just throw my money out the window or burn it in a pile to keep warm because I'd be losing my money in the market anyway.  But the fact that the wave count and internals support the outlook of a major top forming, these small indicators simply add to the bearish outlook and can help us get our timing down a little better.  The stochastic has been maneuvering around overbought territory for a while now, and needs to come back to earth before another major rally phase can get underway.  Oftentimes the stochastic will start moving down prior to prices establishing a downtrend.  And since we don't have that yet, it certainly would not be wise to use this indicator to get short right now.  But if the stochastic starts trending down and prices don't, I might nibble on the short side a bit even if there's no sign of a top.  A long time overbought stochatic starting a downtrend after a weak rally in prices seems like a good shorting opportunity. 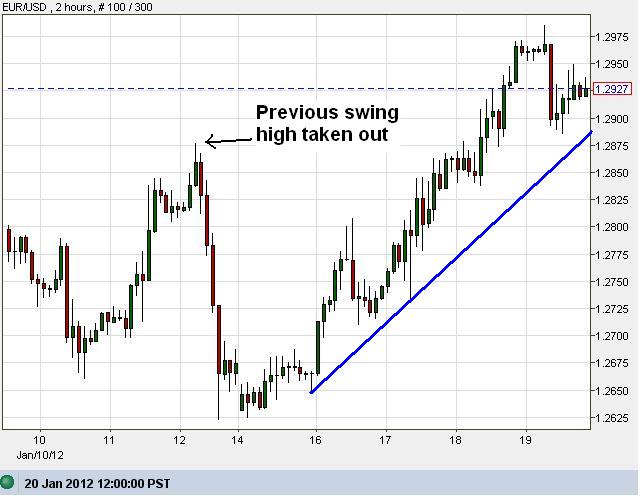 The euro stopped me out a few times in the past week or so.  So I'm on the sidelines again.  With the previous swing high taken out this week, the short term downtrend has been broken so we need to look for higher levels until it proves to us it has reversed trend to the downside.  There's a nice confluence of support levels in the 1.2875-1.2900 area that I'm watching right now.  At 1.2875 you have the previous swing high, at 1.2885 you have today's low, and at around 1.2900 next week you'll have the base of an ascending trendline.  So it's quite simple, a a close below 1.2875 would get me to short the euro again with a stop just above today's high.  Until then, I think it's best the bears wait this rally out.  The euro has been declining almost non-stop for the past several months now and a sharp and deep corrective rally would not be out of the question.  Keeping risk tight here until the euro proves that the uptrend is no longer intact seems wise to me. 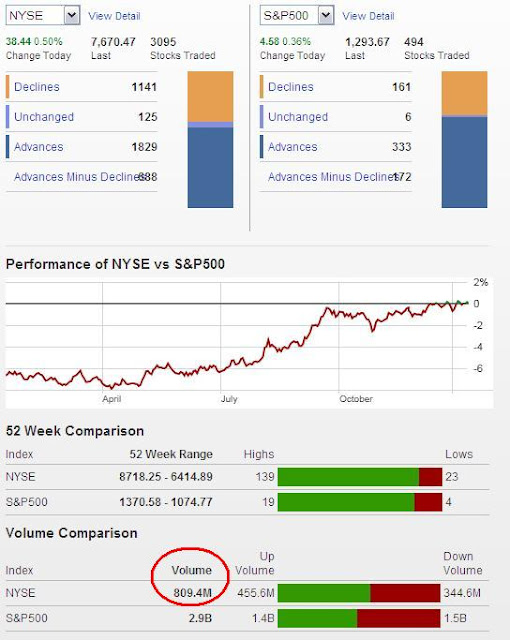 There's nothing new to add to prior posts.  Stocks continue to flip flop around with an upside bias on light volume and diverging momentum suggesting the next big sharp move will be to the downside.  Ideally, 1356 in the S&P cash index needs to hold for the bears to still have a high probability trade in my opinion.  I'm adding to my current short position as the market rises. 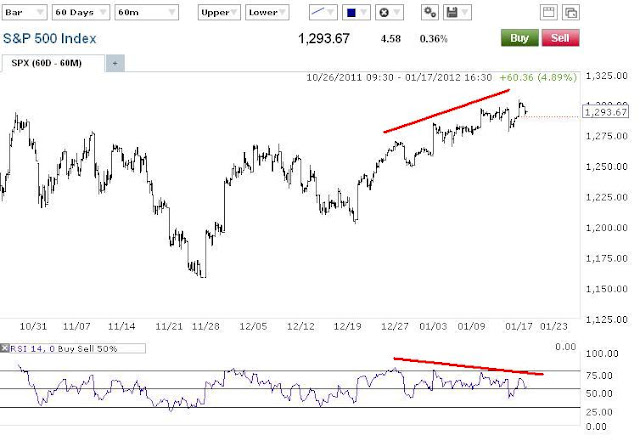 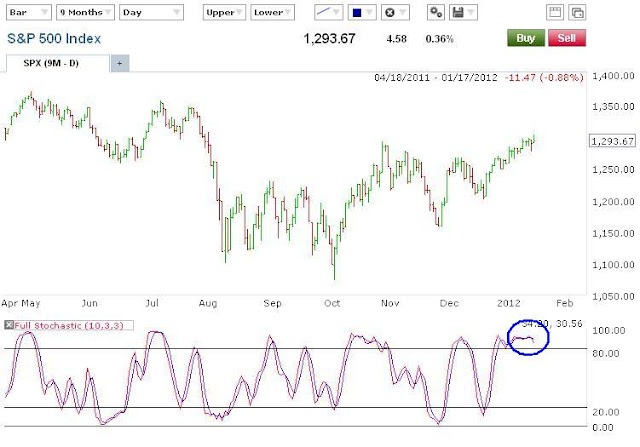 On the hourly chart, the RSI is diverging drastically from prices.  This doesn't signal when a turn is coming necessarily, but it does suggest underlying weakness and that a pullback is probably the next big move ahead.  Also notice that the daily stochastic is starting to trend downward.  Again, not necessarily a good timing indicator, but a suggestion that the next big move will be down.  To me, the only question is whether or not the upcoming pullback is going to just be a temporary decline before moving higher, or if it's going to be a major top signaling the next major downphase has started.  The wave count suggests the latter.  But I can't say with any level of certainty when stocks will stop floating higher, so I don't want to just load up on the short side right now since I could encounter a lot of pain if this float higher continues much longer.  And I don't want to wait for the decline to jump in short because it may decline overnight several hundred Dow points and I'll miss most of the move if it turns out to just be a short term decline.  So I decided to simply just add small short positions as the market moves higher and average into the market on the short side.  It's the best way to play this type of market and reduce risk in my opinion. 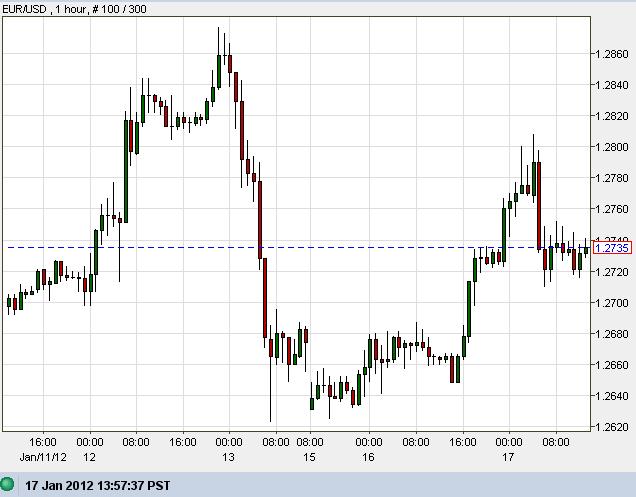 Although stocks are boring me to death, the euro is moving around quite nicely, making it good to trade right now.  The huge rally we got today was a good opportunity for the bears who may have missed the big previous move.  I added short today at 1.2750 and put my stop just above today's high.  The chance of a top here is solid, and the risk/reward for the bears here is excellent.  So in my opinion, it's worth taking a shot at the short side here.  If today's high is broken in the overnight European session, then I'll simply wait for another reversal pattern to reshort as long as 1.2877 remains intact.