Internals today showed a very strong bullish bias but volume was a bit tame at just over 1 billion shares traded on the NYSE.  So the big volume numbers that came in on the last selloff have not been matched by the bulls.  But the bulls have still pushed the market significantly higher nonetheless.  Although the internals don’t suggest any bullish exhaustion, the wave count does suggest a reversal to the downside soon.
Simple Tools for Competent Trades 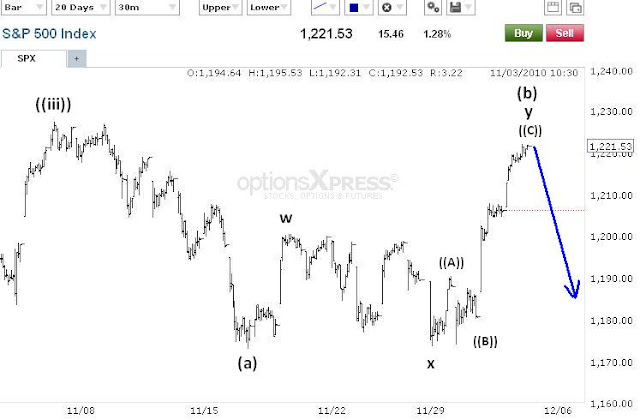 
So unfortunately there are still a lot of options on the table.  The “flat correction” and triangle counts for Minute wave ((iv)) remain my top choice.  So for short term aggressive traders I see an opportunity coming soon on the short side.
Learn Elliott Wave Principle 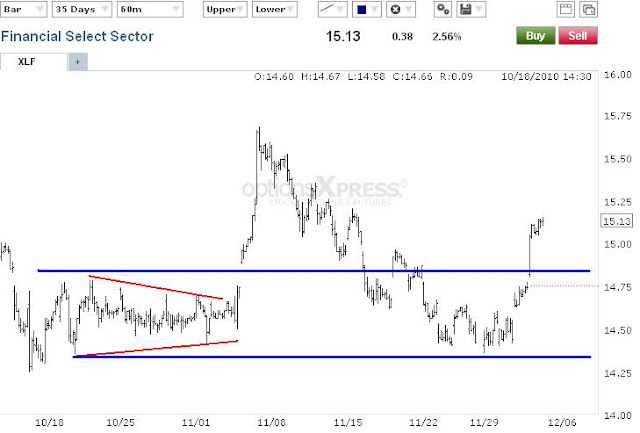 The XLF financials ETF has been on fire this week as you can see from the chart.  The ETF did not break below the extreme low of the previous triangle and has rallied hard once returning to the apex of the triangle earlier.  Also notice that the congestion area I labeled with the blue lines has been broken to the upside as well.  I’m not a buyer of this rally just yet, it’s just too much too fast, and probably based on just news headlines and/or Fed data that’s come out recently.  Neither event tends to start trends, they tend to preface the end of one.  And in this case I’m expecting a fakeout breakout to the upside that will soon be reversed with a shot lower to the downside.  I’m not trading this sector right now as I don’t see a clear entry and risk level that’s appealing, and a reliable wave count eludes me at the moment.  However I think the action and behavior in financials is extremely important to the overall stock market.  As long as the financials lag the overall market on a daily/weekly basis like they have been, I highly doubt a long term rally in stocks as a whole can be sustained. 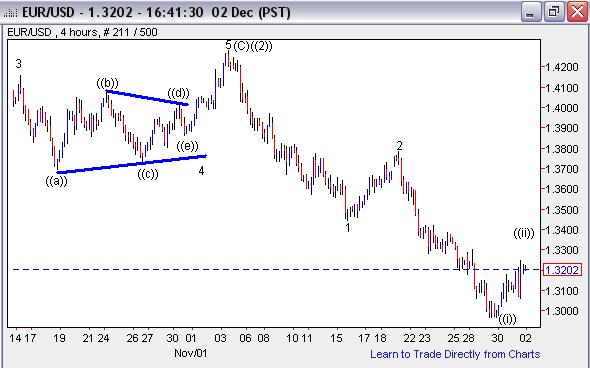 As for the euro, I’m labeling Minute wave ((i)) complete at the 1.30 area and Minute wave ((ii)) underway right now.  The choppy overlapping nature of the rally so far supports the view that it is in fact just a correction.  It can certainly push higher since it does seem a bit small so far, but if it’s in a Minor wave 3 down right now, then rallies could easily be very shallow and weak.  I still feel the longer term trend is firmly down here and I would short rallies as long as it stays below the Minor wave 1 high.

Short update tonight, I don't have much time.

Internals today were very strong and suggest we'll get some follow through at least tomorrow morning.  The wave count suggests the follow-through will be limited though. I discuss more details of that below.  Volume was not that impressive, but looking at the up volume on the NYSE, and the 484 advancers on the S&P, I'd say the bulls were firmly in control today.  But we've seen the bulls and bears exchange blows back and forth the past couple weeks, so I'm not jumping on the bull train just yet.  In fact, the rally we saw today has been expected for quite a while.  Just check out my prior posts.

Last chance to get your Free Moving Averages eBook! 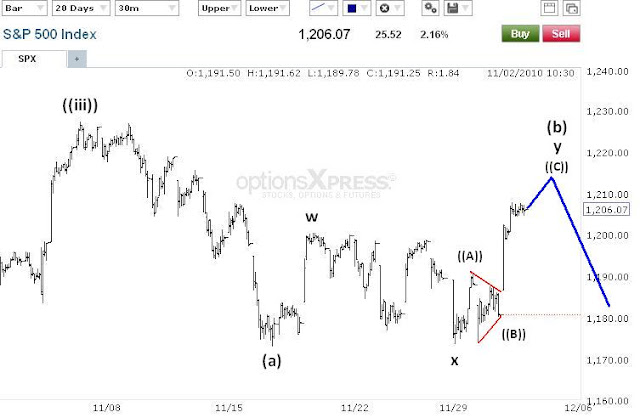 The wave count suggests that Subminuette wave y is near its final stages.  Today was probably a Submicro wave (3) within Micro wave ((C)).  So tomorrow, and perhaps Friday, we should get some sideways and up action to complete Minuette wave (b).  From there, we'll see if the triangle remains on track.  Minuette wave (c) should decline modestly, and stay above the Minuette wave (a) low in the 1174 area.  I expect tightening sideways action in the market into the new year.

We can maneuver in and out of the short term ups and downs all day, but the key is the bigger picture.  Looking at the decline from 1227 it looks choppy with several overlapping waves.  This means it's a correction.  Just like the decline from the highs this April, we don't want to get too caught up in a Primary wave ((3)) outlook simply because we want it to be a Primary wave ((3)).  Only a break below 1129.24 would get me thinking about this even being a possibility.  But right now, the decline from the highs looks choppy, and regardless of how Minute wave ((iv)) unfolds, the bottom line is that EWP is telling us it's all part of a correction. Trade accordingly. 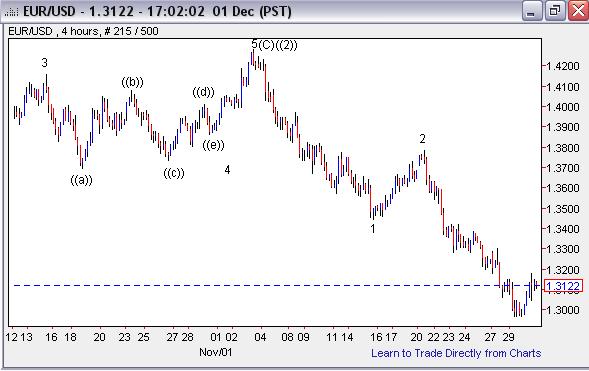 The euro appears to have found support at the 1.30 area and might be in a corrective rally phase for a few days.  With it possibly being in a Minor wave 3 down right now, I wouldn't get too cute and play the upside here in my opinion.  The larger trend and path of least resistance is firmly down.  The weekly RSI is still far from the oversold territory it usually gets into before establishing a major low.  But some shorter term RSI data suggest the euro is oversold so a short term pop may occur for a few days.  As long as it stays below the Minor wave 2 high I have posted above, I would short rallies.

Internals today were a bit interesting in that we had a big surge in volume with 1.5 billion shares traded on the NYSE.  What’s more significant is that the bears were in control most of the day on that big volume.  So the bears flexed their muscle today.  Also, S&P decliners far exceeded advancers at the close.  The bulls have tried a few times recently to push this market higher when it’s down in order to establish 1174 as the bottom, but the bears are just too strong right now and keep winning the battles.  And it’s looking like another test of 1174 might be coming soon, and as I’ve said before, triple bottoms are extremely rare so I would expect 1174 to be taken out rather easily. This suggests that my triangle count is wrong and that a zig-zag or combination correction for Minute wave ((iv)) is occurring instead.  So a rally should occur quite soon if my triangle count is to remain on track.
Last chance to get your Free Moving Averages eBook! 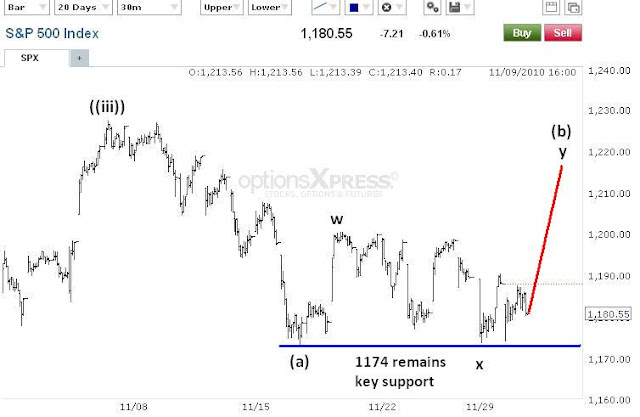 If the market is in fact in a triangle for Minute wave ((iv)) then Minuette wave (b) higher needs to get moving tomorrow.  Right now, this count is looking suspect, and I'm hoping to get a big move in any direction soon so I can either keep or eliminate this count.  This triangle is becoming quite long in time and is not progressing as one would expect.  Tomorrow should be telling.  Another move lower should test and break the 1174 area and open up the 1150-1160 area next.  Only a break below 1129.24 would signal that perhaps something much bigger than just a correction was occurring.
Learn Elliott Wave Principle 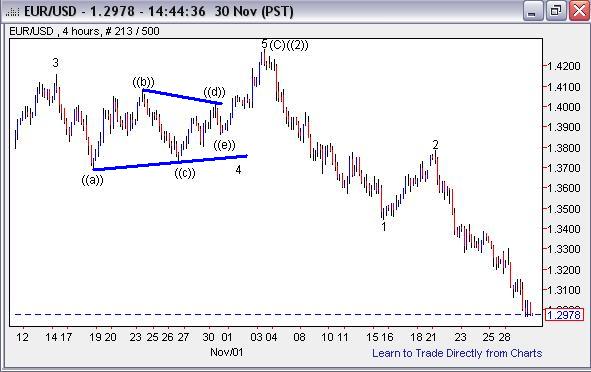 The euro continues to weaken as expected.  The GBP/USD and AUD/USD look like they may be bottoming, so a euro rally would not be a surprise.  But keep in mind, if the euro is in a Minor wave 3 down against the US dollar then there is much more potential lower for the euro ahead.  And I would definitely NOT get long the euro here, that’s for sure.  I see no reason to abandon the bearish stance on the euro, or the bullish stance on the US dollar at this point.

PLEASE NOTE: THIS IS JUST AN ANALYSIS BLOG AND IN NO WAY GUARANTEES OR IMPLIES ANY PROFIT OR GAIN. THE DATA HERE IS MERELY AN EXPRESSED OPINION. TRADE AT YOUR OWN RISK.

Hope you all had a great Thanksgiving holiday like I did.  I'm sure I've put on a couple thousand pounds this past week seeing as that I have to basically just "roll" myself around from point A to point B instead of walking.  Apparently I'm not the only one, market participants must have also still been recovering from the Thanksgiving holiday today because volume was quite light as it was well under 1 billion shares traded on the NYSE.  The market rallied back in the late day trading but the S&P decliners still closed quite heavy for the day.  Looking at just internals and market behavior alone, this market looks weak and should continue lower beneath the support level of 1174 in the S&P this week.  But looking at the wave count, it suggests just the opposite for the short term, and today's strength in financials MAY be a sign of a big rally tomorrow.

United STRAITS of America: The Muni Bond Crisis Is Here 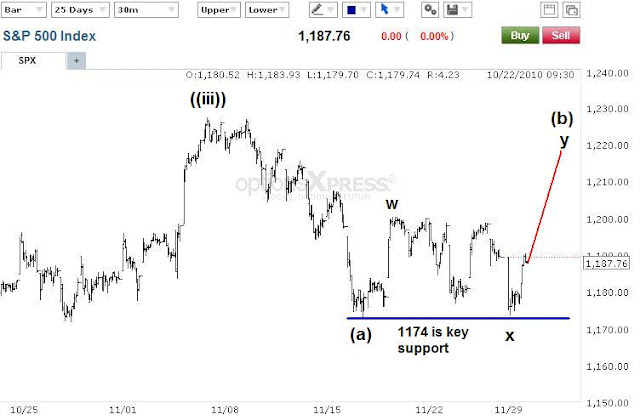 If the stock market is in a Minute wave ((iv)) triangle then it is certainly testing our patience.  A break below the Minuette wave (a) low today would have made the triangle very unlikely.  But the decline today stopped just short of that level before mounting a nice rally into the close.  According to the wave count I'm projecting, we should get a push up to the 1210-1220 area for Minuette wave (b) of the triangle.  From there we'll get a modest decline for Minuette (c).   A strong decline below the Minuette wave (a) low at 1173 would make the overall decline look more like a combination correction (WXY) than a triangle, and that we'll get more weakness into at least the 1150-1160 area quite soon.  Only a decline below 1129.24 would remove the corrective decline scenarios from the table and suggest that something much bigger to the downside is occurring. 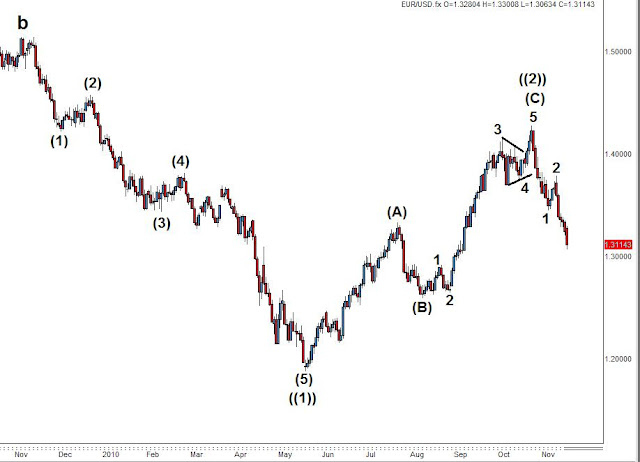 The euro continues to fulfill the bearish forecast I've been mentioning here for a while now.  The typical Thanksgiving weakness did not fail to disappoint this year as the euro has pretty much declined the entire week.  I'm posting the daily chart above to keep focus on the bigger picture which has the euro setup for a Minor wave 3 down right now.  If correct, the trend is firmly down and getting caught up in the short term fluctuations would be foolish in my view.  The euro is heading lower and the dollar is heading higher.  Only a break above the Minor wave 2 high at 1.3785 in the euro would sound the caution alarms for the bears.