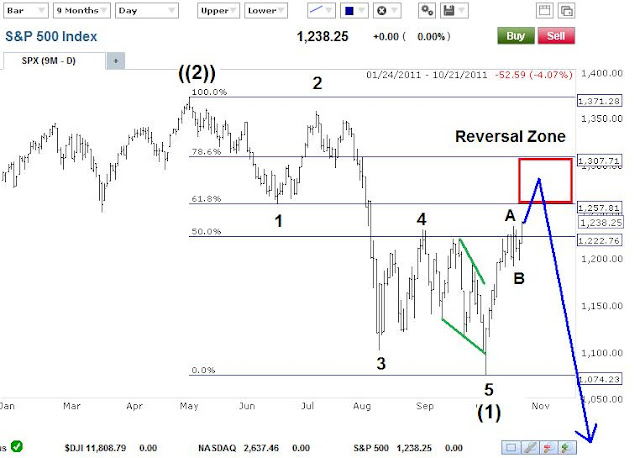 Stocks have not done anything unexpected the past week.  Wave (2) was projected to be underway, and was projected to be strong and deep.  It's definitely filling those expectations as you can see it's already surpassed the 50% retracement level, and has barely let up at all.  I see no signs of a top so I expect higher levels next week.  However it's probably in Minor wave C of Intermediate wave (2), and wave Cs can be very sharp yet brief affairs.  So I want to be vigilant and watch the moves carefully next week.  A big rally and reversal in the same day would be a great sign that Intermediate wave (3) had started.  This wave will present an absolutely fantastic opportunity for the bears since it should result in several hundred S&P points being erased rather quickly before a bottom occurs.  So I don't want to miss it.  Further rallying from current levels will get me to start nibbling on the short side.  Once we get a good sign of a reversal then I'll start to pile on even more to the short side. 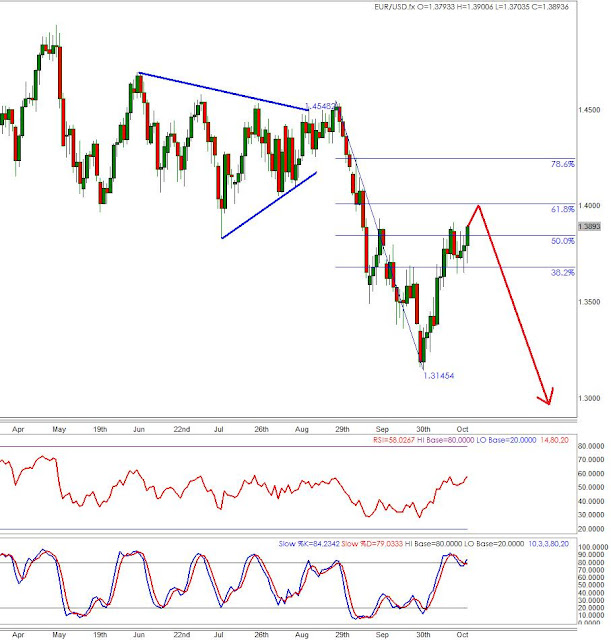 The euro's structure remains unclear so I'm focusing on basic technical analysis here.  Although I do feel a major top has occurred in the euro back in May of this year since it aligns with the big picture in stocks.  With that in mind, the RSI's rise remains healthy while the stochastics have crossed over, suggesting at least a pullback might be coming soon.  I hold the RSI in much higher regard than stochastics, so I'm still on hold trading the euro.  And since stocks probably haven't topped yet, I'm looking for the euro to continue climbing as well.  Looking higher we see a nice resitance level at 1.4000 since it is a solid round number and it's also a 61.8% fibonacci retracement level of the big decline the past few months.  This should be a good topping area to watch for the euro.

Much like stocks, further rallying this upcoming week will get me nibbling on the short side here, waiting for a big reversal sign for me to pile on even more to the short side.