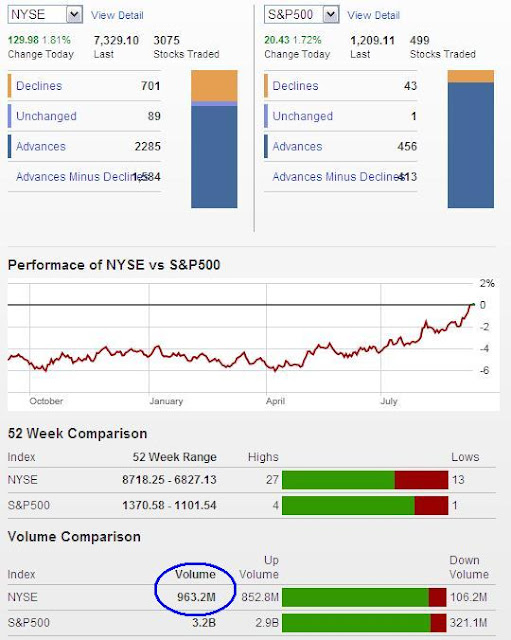 The price action in stocks was strong today but internally it was a weak move.  The recent rally has been relentless in price, yet volume and advancers vs decliners has weakened.  The rally looks corrective and the next big sustained move should be down.  We just have to wait.

Check out the new EWI video on MACD momentum analysis at the bottom of this post, or get a free technical indicators report now. 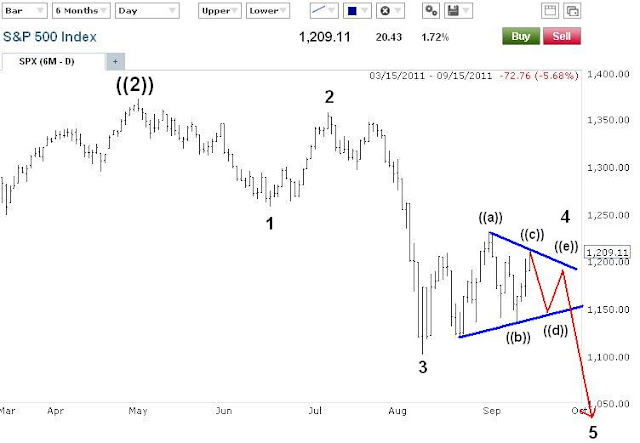 The limits of the triangle interpretation above are being pressed with today's big rally.  Wave ((c)) cannot go above the top of wave ((a)).  Doing so would negate the triangle count and create some concern for the bears from an EWP standpoint.  But as I said earlier, with internal strength declining as the rally chugs on, the market's larger downtrend appears to still be intact regardless.  Wave ((d)) down should start almost immediately. 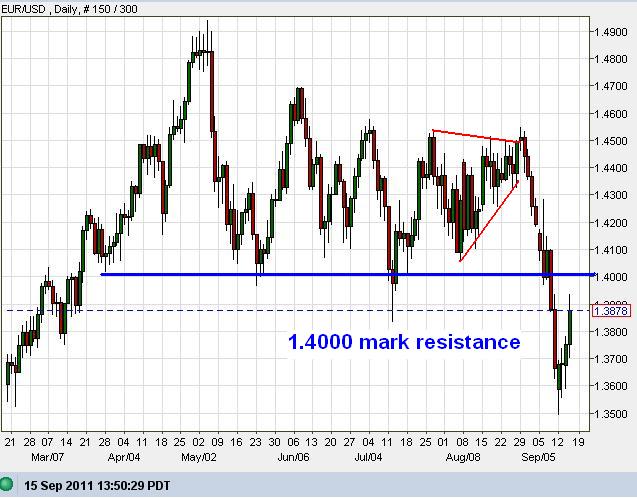 The 1.4000 appears to be in the euro's sights at this time.  Although the euro's rally the past few days has been choppy suggesting it's a correction, it has held its series of higher highs and higher lows.  So the short term trend remains up.  Until that uptrend is broken, look for the euro to get to the 1.4000 level.  I expect firm resistance at that level and believe it will mark a breat area for it to reverse and continue its larger downtrend. 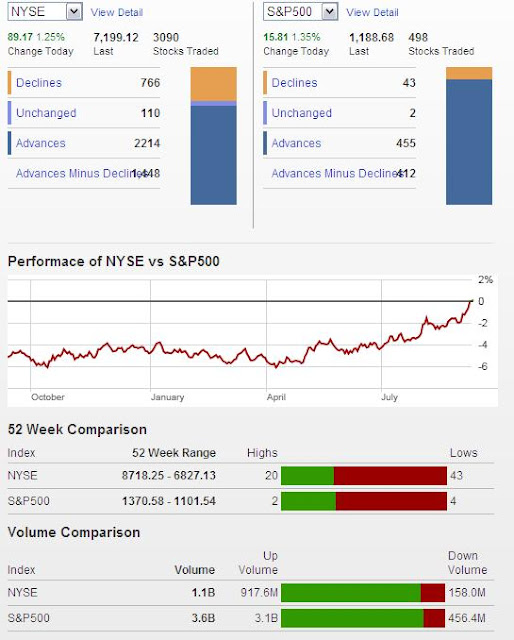 Not much new to add from yesterday's post.  I just wanted to put up today's internals that support the 4th wave triangle scenario I mentioned in yesterday's post.  1.1 billion shares traded on the NYSE today and uppers vs downers and up/down volume was bullish but nothing jaw dropping.  The late day big decline is probably just wave ((d)) of the triangle getting underway which should continue tomorrow.  The range for the market should continue to tighten the rest of the week and probably into early next week before a big surge to new lows for Minor wave 5.  A good bottoming range for the S&P is the 1050-1100 area.

I'll post more as things develop or change.  Please check out yesterday's post below for an in depth look of how I view the market right now as well as the count I'm tracking.
No comments:

Stocks Might be in Triangle, but does it Matter Right Now? 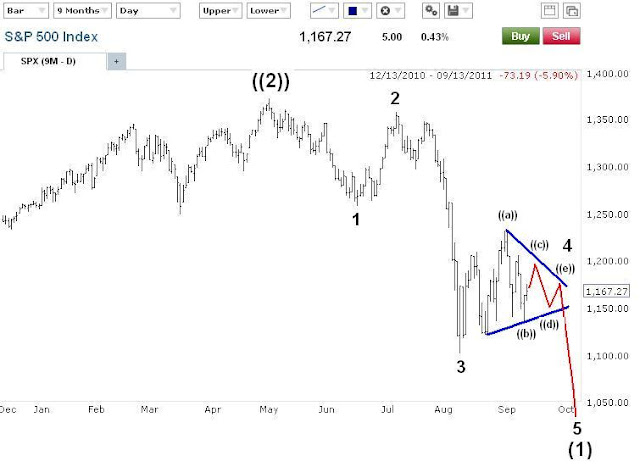 No, it doesn't matter right now, in my opinion.  There are several interpretations of wave labels that are in play.  I listed a few last week.  But all have one thing in common, a new low beneath 1100 (Minor wave 3 in the above chart).  So I don't want to get caught up in trying to exactly pin the market down to which count is correct.  I want to just ride the wave down and see what happens once new lows are made to determine if I should hold short, or cover.

The up-down nature of the market lately with almost no net result positive or negative combined with weakening volume suggest a triangle might be forming. I labeled it above.  A triangle would be very good for wavers because triangles only occur in X, B and 4th waves.  So a triangle will significantly help us narrow down the larger wave count with higher probability and help us predict with more certainty of future movement.  Triangles also precede terminal thrusts, meaning that a sharp move will occur when the triangle is finished and then reverse completely.  So short term traders can make quick profits with little risk on that thrust.

Let's keep tracking this triangle count.  Of course it's all about probabilities and I'm not 100% sure the triangle is occurring right now.  But it's definitely a tradeable structure for those familiar with the rules for a tirangle.  But still, keep in mind we might also be in a 5th wave down and they are often tricky.  Many times one or just a few indices will make new lows, or only do so on a closing basis, making it tricky to know when to get out before a big reversal.  So I'm keeping a close eye on the overall market looking for any sign that may have us conclude a major bottom is in.  Right now it doesn't appear we're there quite yet.

Check out the new EWI video on MACD momentum analysis at the bottom of this post, or get a free technical indicators report now. 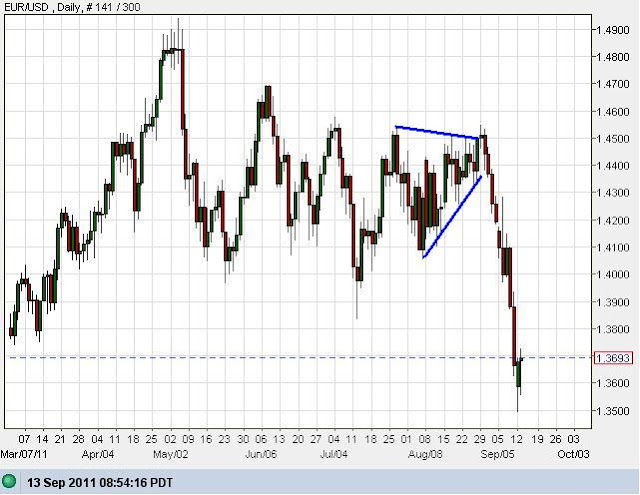 Counting waves here would be sloppy and irresponsible in my view.  I need more of the structure to unfold before doing so.  Labeling the chart now could only be done if I were to be very very creative.  And that baiscally means I'm forcing my own bias onto the market and making my wave counts support my bias.  I don't want to do that so I'm just looking at chart basics.  And those basics say the euro looks broken down here with more to go on the downside.  As I said many times the past few weeks, the euro's multi-week consolidation would result in a sharp move in either direction.  That direction was down, obviously, and it doesn't appear over.  It's probably just taking a breather before falling lower.  There's no evidence a bottom is in so I favor the short side.