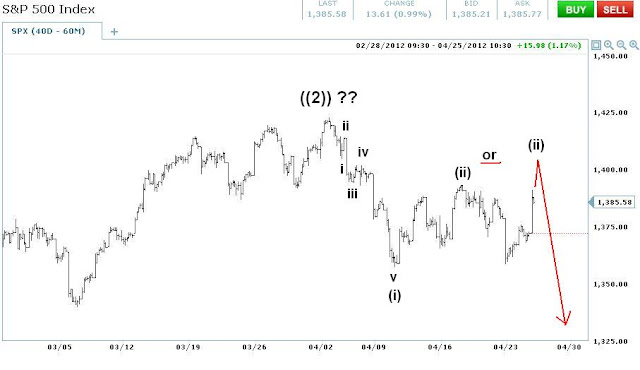 Below I list my projections and stop levels.  As long as the stop levels remain intact and nothing significant develops, this post will stand as guidance for the foreseeable future.

The bottom line is that the S&P looks poised to fall soon.  It has either topped already with wave (ii), as seen above, or will do so with one more poke higher before turning down hard.  As long as 1422.38 in the S&P cash index remains intact, the index is very vulnerable to a big decline at any moment.  Remember, the Fed will make an announcement later today which could result in some volatility at the end of the trading day and into tomorrow. 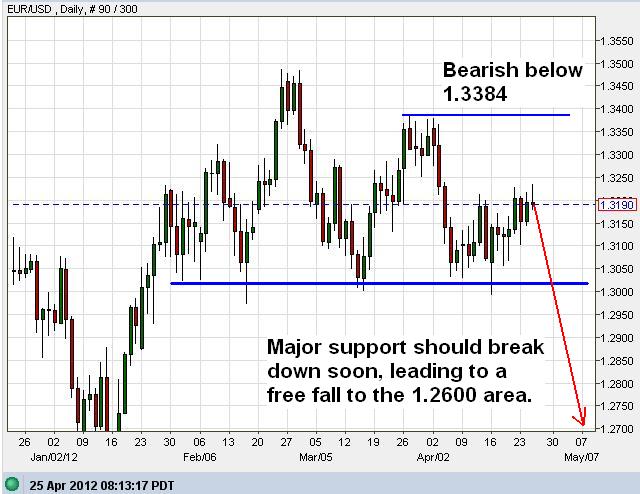 The daily euro chart is very bearish as you can see above.  There have been several attempts to break down the 1.3000 level that have failed.  But with every attempt, more and more of the support is eroded until eventually there's almost nothing left.  The decline from 1.3384 is strong and the recovery from the 1.3000 area is choppy and weak.  I expect the euro to stay below 1.3384 and continue lower through 1.3000 quite soon.

Stock Market Turning Points: Has Wall Street Ever Warned You in Time? 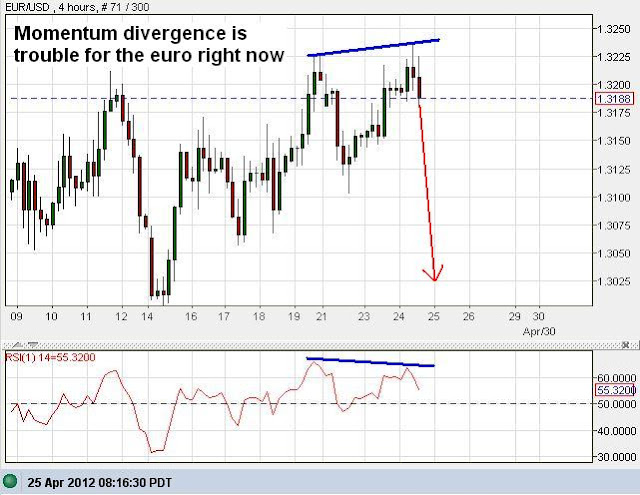 The short term does not look good for the euro either.  The euro has really been laboring to make new highs since recovering from 1.3000, and the most recent high on the hourly chart was not confirmed by the RSI, suggesting the rally is weakening severely.  The Fed announcement can throw everything off quite a bit, so if you have a trade in, manage risk properly, buckle your seat belt and prepare for a possibe wild ride later today.  Overall though, as long as 1.3384 remains intact, I see the euro as very bearish.


PLEASE NOTE: THIS IS JUST AN ANALYSIS BLOG AND IN NO WAY GUARANTEES OR IMPLIES ANY PROFIT OR GAIN. THE DATA HERE IS MERELY AN EXPRESSED OPINION. TRADE AT YOUR OWN RISK.
8 comments:
Newer Posts Older Posts Home
Subscribe to: Posts (Atom)