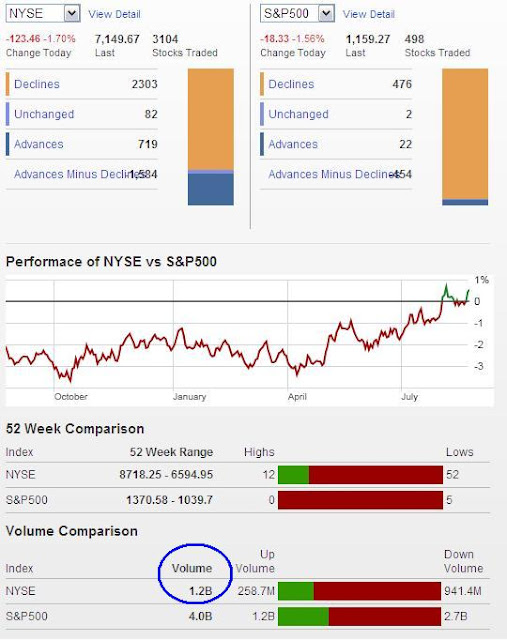 Stocks reversed nicely today but volume held at the same level it's been at the past few days while it was rallying.  Probably the same folks who bought up this market just took profits today, lol.  I would have expected to see higher volume for the kickoff of Minute wave ((iii)) down of Minor wave 5, but with most people waiting for Bernanke's comments tomorrow, the big volume probably won't come in until Friday or Monday.  And I expect that volume to be slanted heavily on the sell side.

Using simple candlestick analysis you can see that the daily S&P cash chart shows a nice reversal pattern was put in today.  A strong new high was made today compared to yesterday, and then a new low was made compared to yesterday, and today's close was beneath yesterday's open.  All-in-all, a bearish formation.  I expect today's high to remain intact for at least a few days while the market falls hard. 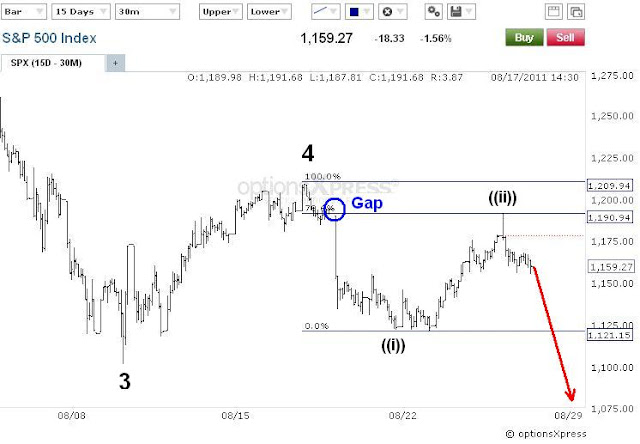 For those of you who grew up watching the TV show The A-Team you'll appreciate it when I say, "I love it when a plan comes together" (Hannibal Smith).  Yesterday I said to expect a reversal at the 1190 area in the S&P since there is a gap there and a 78% fibonacci retracement level.  Even I was surprised to see the market turn on a dime right at that level.  Today's reversal looks good on so many levels, i.e. fibonacci retracements, EWP requirements/structure, candlesticks, gap behavior, etc.  The only problem with today's decline is the structure.  It is far from a good impulsive decline, so far.  But if it's the beginning of a larger down move, such as a Minute wave ((iii)) down, then there is some wiggle room for the early stages of the decline since further price action can easily clear up the short term's lack of clarity.

I expect today's highs to remain intact and the market to fall hard Friday and/or Monday.  A break above today's high will probably mean the Minor wave 4 high will also be broken soon as well.  So as long as today's highs remain intact, I'm firmly bearish in the short term.  The risk/reward strongly favors the bears here.


Should Stock Investors "Fret Over Economy"? No -- See Chart to Understand Why 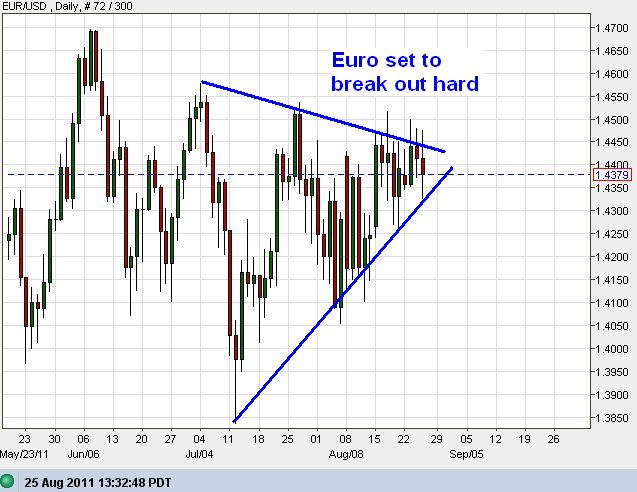 The GBP/USD traced out a 5 wave decline and made me a quick 100 pips in less than a day so I closed my short position this morning.  I feel the pair can easily continue lower but I don't want to be greedy.  Looking at the EUR/USD above, the sideways consolidation has really tightened lately, suggesting it is about to breakout hard and fast.  Looking at the daily chart alone would have me thinking the pair will breakout to the upside, but the series of lower lows in combination with the fact that it appears gold has formed a major top, have me leaning towards the euro breakout happening to the downside.  I expect gold and the euro to fall hard in the coming days. 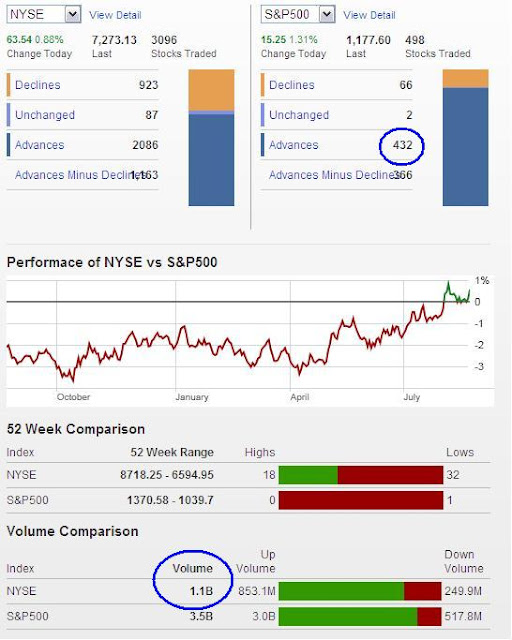 Internals today were solid on the bullish side but nothing spectacular.  You can see a slight decrease in momentum from yesterday as volume was slightly down as well as advancers on the S&P.  Nothing very telling from this though, other than there seems to be little interest in buying up the market here from the big players.  I think a lot of this is just short covering going into Bernanke's speech on Friday, and relieving the oversold condition the market got into after the past few weeks.  The market can certainly float higher and higher on light volume, but the risk/reward of trying to follow a light volume move after a massive selloff is not good in my view.  So I'd be looking to short, and I have been.  Volume on this rally tells me it's a countertrend move, not the start of a new bull run.﻿
﻿
Should Stock Investors "Fret Over Economy"? No -- See Chart to Understand Why 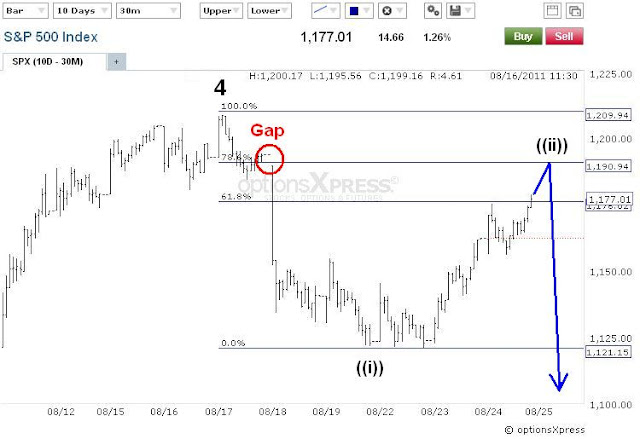 The stock market had a nice reversal midday which showed some promise but was quickly erased and new highs were established telling us Minute wave ((ii)) is not over.  I zoomed in on the wave count I'm tracking above.  The conclusion of Minute wave ((ii)) is near.  The market rally seems to be fueled by short covering on risk reduction going into Bernanke's speech Friday as well as the hopeful perma-bulls thinking Bernanke will say something magnificant Friday.  I have no idea what will happen, nor do I care.  The charts are what talk to me and....shhhhhh, .listen.......(whispering) the charts are telling me that Minute wave ((ii)) is almost finished and a reversal to the downside is near.  And just in time for Bernanke's comments Friday.  There's an open gap and a fibonacci retracement level at the 1190 area that should mark a stopping point for this rally, if not sooner.  If correct, the selloff from there will be huge, at least 70 S&P points in a hurry.  But a break above 1208.47 will invalidate this bearish view and put me on the sidelines until things clear up.

Bottom line: the markets are eyeing Bernanke's Friday comments, so look for the timing of the reversal to be between Thursday and Monday, and look for the price of reversal to be at around 1190 in the S&P cash index, if not sooner.  Only a break above 1208.47 will negate this bearish view. 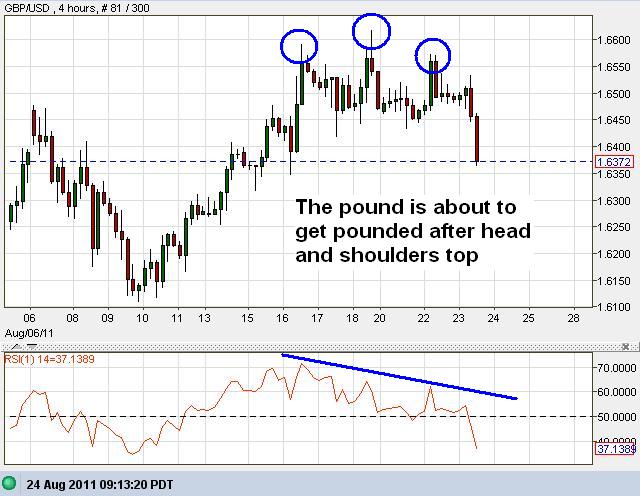 Well the euro may be a mess, but the Brisith pound is telling us a very clear story here, and it's bearish.  The 4hr chart I made this morning is above and shows a nice clean head and shoulders top accompanied by textbook diverging momentum during the head and shoulders process.  The break of the neckline and sharp selloff is a clue that this pair is in trouble.  Despite the euro holding firm, the fact that the British pound has appeared to have topped against the US dollar, and gold's big top and selloff today, it's possible the US dollar is set to surge big here, which is bearish for the GPB and EUR and other majors.

I got short the GBP/USD today, I think the dollar is set to surge while gold and silver continue to freefall. 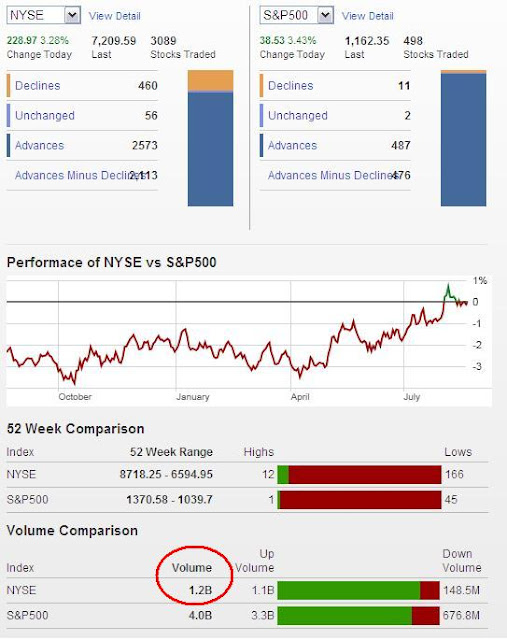 Prices sure took off higher since my post this morning.  The surge in price is what I'd expect to see when a significant bottom is put in place, and the advance/decline ratio as well.  However volume was quite light today relative to the past few weeks at only 1.2 billion shares on the NYSE.  If this were significant bottom being put in place to kickoff Intermediate wave (2) higher, I'd expect to see much higher volume on the move today.  The light volume today tells me the big shots and heavy players needed to put in a bottom were absent today.  This morning's post still stands despite the big surge in the second half of trading today.﻿ 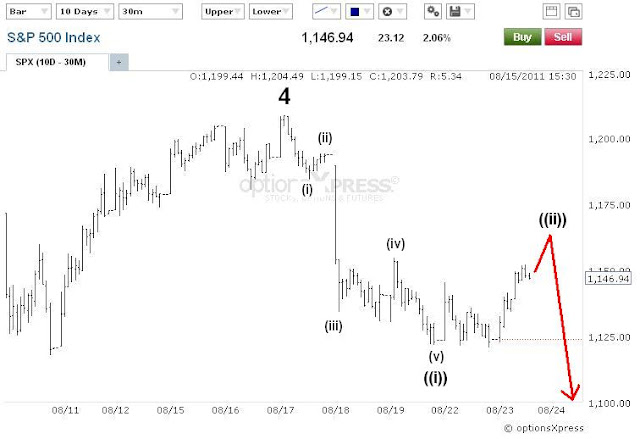 1) most major indices/sectors have not made new lows beneath their Minor wave 3 extremes; and

2) the bottom and rally has been anemic in price action and internals.  I would expect a more violent move off the lows, or a much larger and internally stronger push higher to kickoff such a large wave that Intermediate wave (2) would be.

I don't see those two things here which tell me that most likely my alternate count is in play (see above chart).  This means that this current bounce is simply a Minute wave ((ii)), and when it ends, Minute wave ((iii)) down within Minor wave 5 will be underway.  This will be a pretty strong move to the downside that should have no problem taking most, or all, of the major indices/sectors to new lows.  So, as long as the S&P cash index stays below the Minor wave 4 high at 1208.47, this market is still bearish in my view.

Should Stock Investors "Fret Over Economy"? No -- See Chart to Understand Why 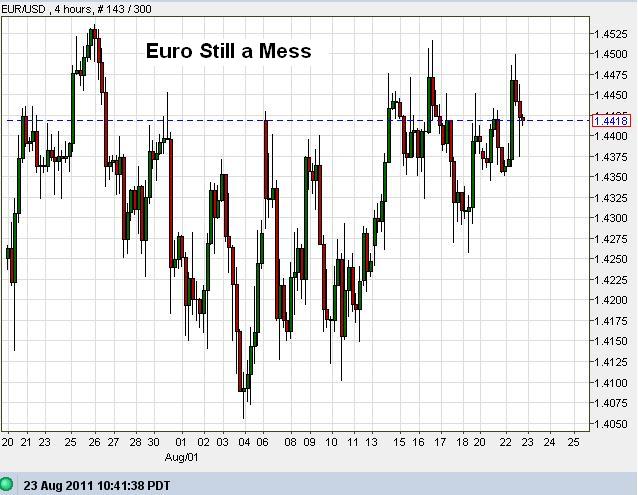 The euro is still a mess and no wave count can be determined here with high confidence, so I'm not going to "guess" and put one up.  It looks clearly corrective to me here which suggests a new high for the year is on the way.  But the recent move higher so far is also a choppy mess, suggesting we may have a sharp decline first.  Too many "ifs" and "buts" for this one so I'll avoid it for now.

My opinion is that the euro is experiencing a push/pull affect.  One example is that behavior in gold relative to the stock market.  Gold has been soaring to new all time highs and seems hell bent on getting to the $2,000 mark before exhausting.  But stocks have been plummeting during this time.  This push/pull of related forces on the euro has helped create the choppy price action you can see in the chart above.  I'm not sure how this will resolve though since when gold finally tops and reverses down, stocks should be headed up.  So which way will the euro go when that happens?  I have no idea, and since I usually depend on the EWP count for direction, I'm stumped.  I'm staying away.