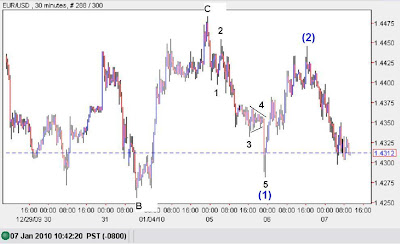 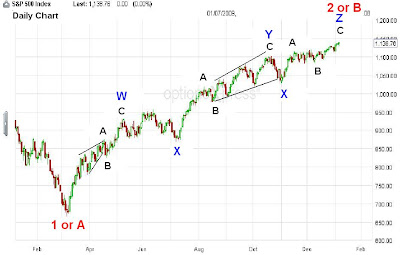 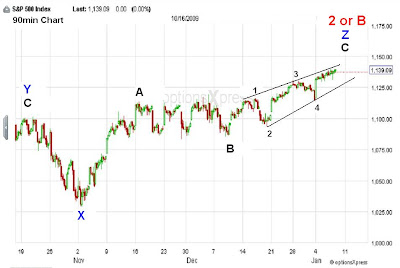 The EUR/USD has fallen as projected in yesterday's post (click here for post). The pair has yet to break beneath its previous low at 1.4216 so it should continue lower in the short term. If I were to have shorted this pair at the 1.4405 level which was where it was trading at when I posted this count, I would move my stop loss now to break even right now, or at least to above the wave (2) high around 1.4450. Once this pair makes a new low beneath 1.4216 it will have satisfied all of EWP's requirements for a nice clean 5 wave decline from the highs a few months ago (click here for count), so it will be ripe for a sharp and deep corrective wave 2 rally. So I would not get too cute and greedy on this short trade right now, and make sure I protect my position aggressively.

As for the stock market, I had a count Tuesday that suggested the S&P would rally strongly in a wave 3 soon (click here for count). That obviously has not happened, but neither have any key levels I cited been broken yet either. Tomorrow has the all important jobs data that everyone clings to lately, so we should get some volatility and deliberate movement in the market either later today or early tomorrow surrounding the report. Once that occurs we should have a better idea of the short term wave count.

Just food for thought, I posted a daily chart of the S&P cash index to keep our eyes on the bigger picture. It shows that we are in a wave C of a triple zig-zag. There is no quadruple zig-zag, so once this count is complete, that's it, it's over; the market must selloff sharply in wave 3 or C to lows beneath those made in 2009. When we look at the close up of this structure on the 30min chart posted, we can see that it's possible that we're in an ending diagonal right now. This most likely will result in a pop to the upside trapping the bulls, then an immediate sharp reversal. So with the jobs number coming out tomorrow, the bullish wave 3 of C count as well as the ending diagonal bearish count are both viable as they both set up for big market moves tomorrow. Refer to the key levels made in blue that were cited in Tuesday's post for reference by clicking here.

PLEASE NOTE: THIS IS JUST AN ANALYSIS BLOG AND IN NO WAY GUARANTEES OR IMPLIES ANY PROFIT OR GAIN. THE DATA HERE IS MERELY AN EXPRESSED OPINION. TRADE AT YOUR OWN RISK.
5 comments:

EUR/USD Declining Impulsively, Look for a New Low Beneath 1.4216 Soon 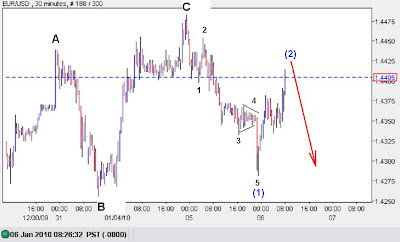 The attached 30min EUR/USD chart shows a 5 wave decline following a larger ABC correction I have as a wave 4. The recent 5 wave drop implies the downtrend has resumed and that a new low beneath 1.4216 will happen soon to complete the entire 5 wave decline from the daily highs (click here for yesterday's 8hr chart count) 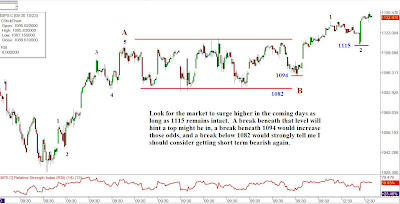 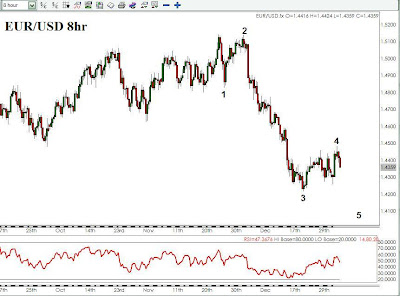 The short term S&P cash index wave count is not clear, mainly because of the sideways consolidation pattern that stayed in a channel instead of adhering to the rules of EWP's triangle formation. But it's still a consolidation that has now broken out to the upside so I'm calling it a B wave. If the count is correct in the attached S&P chart, then we're about to embark on a strong wave 3 of C that will be quite strong and fierce. It should charge toward the 1200 level, although this is just an educated guess at this point, before finding a top and reversing. As I said last night, thrusts from triangles are sharp and quick; but they are also terminal finishing moves that are quickly completely reversed. But note that the recent consolidation is not technically a triangle, although it sports the same type of psychology, so watching for post-triangle type behavior is warranted. This count is quite simple in remaining top choice, as long as the S&P holds above 1115 then it remains my primary count. A break below 1094 would mean I'd need to readjust the count and that possibly a top was in. A break below 1082 would strongly signal a top is in and that strong consideration should be given to getting short term bearish again.

The bulls know they have to make new all time highs in all the major indices to convince the public, and mostly themselves, that the worst of the credit crisis is over and the road to Dow 30,000 is on the horizon. So I expect a sharp sprint to the finish line of this marathon as the bulls throw in everything they got to shoot this market to new highs. But it will utlimately fail........miserably.

Nothing has changed for the EUR/USD and the US dollar. The EUR/USD should be on its way to a break beneath 1.4200 to complete its wave 5, and a complete 5 wave decline. From there we should get a sharp wave (2) rally. It is on that rally that I intend to re-establish my short EUR/USD positions again.

EUR/USD Should Drop in a Wave 5 Soon; Stock Market in Blowoff Top 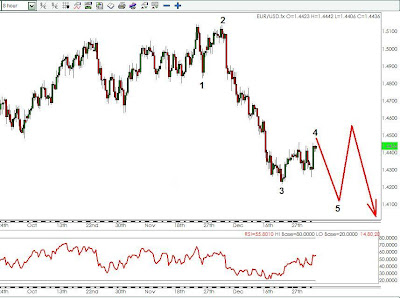 Short update today as I'm fighting a cold and want to crawl back into bed. The above 8hr EUR/USD chart shows that the move is incomplete, and that a wave 5 is due soon that will draw the pair to a new low before rallying in a longer and deeper rally. This pair is the practically the mirror opposite of the US Dollar Index, so just flip this chart upside down to get a picture of the dollar as a whole.

The stock market's surge to a new high today looks like the start of a "blowoff top" to me. We had several weeks of sideways action, not quite looking like a triangle but the same concept. We are now thrusting from this consolidation which is a terminal move. Thrusts tend to be sharp and quick, but are quickly completely reversed. The wave count is not clear right now in the short term, but I think the bulls are getting impatient and want to push the S&P to 2000 soon to fulfill their prophecies that the worst is over and the bull run is back on. The past several weeks of sideways action has frustrated them and they are now going to throw everything they have left in on this final thrust upward. But it will be the final sprint of a marathon that the bulls will lose. I'm practicing patience now and am waiting for signs of a reversal. Until, I think the best thing is to get out of this rally's way and wait for the market to give up the goods to the downside in a manner thought would be very opportunistic for the bears.