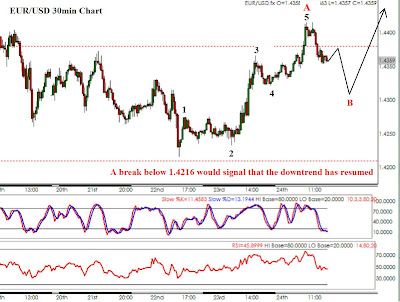 The dollar's trend has changed to down for the short term. I attached the chart of the euro vs. the US dollar, which basically moves opposite the to the US Dollar Index. The EUR/USD is sporting a clear 5 wave rally. Most likely it's a wave A in at least an A-B-C correction. I'm waiting for it to reach the 1.4540 - 1.4700 range I mentioned yesterday before I start shorting the EUR/USD. But, because the rally off 1.4216 is in 5 waves, it cannot be a "flat correction", therefore if the pair breaks below 1.4216 then that would hint that the downtrend in the EUR/USD has continued and that it should fall much further. So currently I have a "sell stop" order placed at 1.4210 so I can catch a collapse if it occurs. Aggressive traders can look to go long the EUR/USD right now with a stop below 1.4216, however I don't recommend that. The EUR/USD downtrend is too strong to play against it in my view. I'm merely looking for opportunities to get long the US dollar by buying the USD/CHF and shorting the EUR/USD, AUD/USD and GBP/USD.

In summary, I currently have a "sell stop" order on the EUR/USD at 1.4210, but will remove that order and start getting short the EUR/USD immediately once it enters my resistance range of 1.4540 - 1.4700.


PLEASE NOTE: THIS IS JUST AN ANALYSIS BLOG AND IN NO WAY GUARANTEES OR IMPLIES ANY PROFIT OR GAIN. THE DATA HERE IS MERELY AN EXPRESSED OPINION. TRADE AT YOUR OWN RISK.
5 comments: 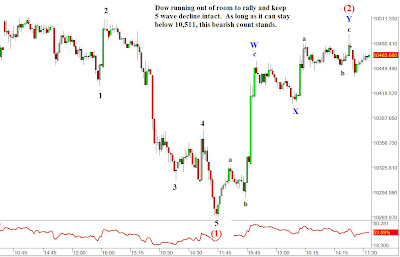 The Russell 2000 index made a new daily high, confirming the other indices' new highs, which is very disappointing for the bears. The fracturing of the market was quite deep and with various indices and sectors a few weeks ago, but the Dow Utilities and Transports, and now the Russell 2000 have all confirmed the highs of the Dow, S&P and Nasdaq. The only main lagger is the financials, the XLF, which is still trailing badly.

As for the Dow count, it still remains intact but has exceeded the normal level of retracement of 78.6%. The only rule for wave 2 is that it cannot exceed the beginning of wave (1) at 10,511. So the attached count remains valid until that level is broken, and offers a great risk/reward opportunity for the bears.

The dollar measured in the USD/CHF has formed a double top and reversed sharply and broke to a make a lower low beneath the 1.0385 level I mentioned in my last post which breaks the short term uptrend. So extreme caution is now warranted for short term dollar bulls as the dollar might have formed a short term top, and should reverse for the next several days. The long term trend for the US dollar is still up, so I will be looking to buy again when the USD/CHF gets into the 1.0175 - 1.0270 range, and for the EUR/USD I'd be looking to sell when it reaches the 1.4540 - 1.4700 range.

With the holiday season in full force now, and light trading in place, I'm not sure how often I'll be posting before the new year. If something of significance occurs I'll be back, otherwise enjoy the holidays with friends and family and remember that the markets are just a game, but good health and relationships with good friends and family are what's really important.

Dow 5 Wave Decline Intact, is the Dow Telling us a Top in Equities is in? 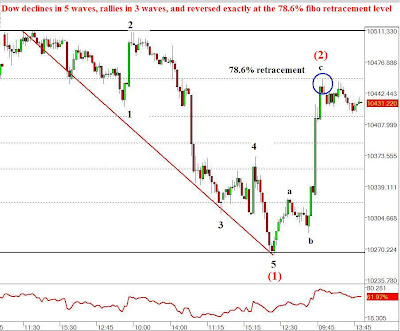 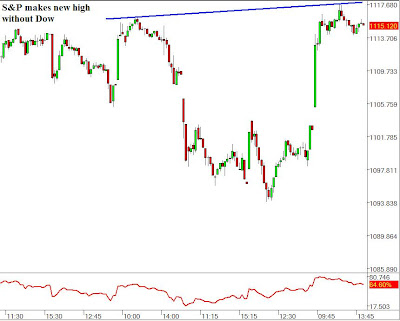 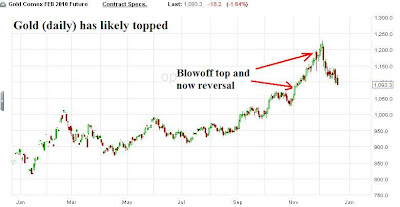 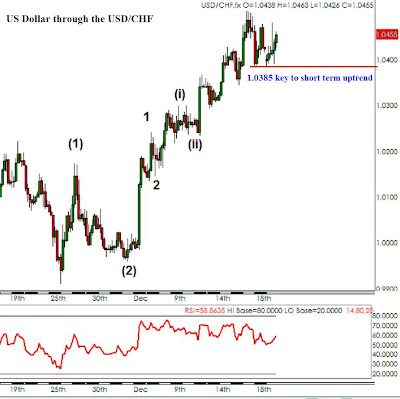 In my last post I illustrated a clear clean 5 wave decline in the Dow Industrials (click here to see that post for context). Other indices didn't follow suit last week though, and today we see why. The other major indices, especially the S&P, have made new highs yet the Dow has not, so this explains why the other indices did not decline in 5 waves like the Dow, it's because they were correcting and were going to charge to new highs, while the Dow has possibly topped and reversed. Observe the 15min Dow cash chart attached. It shows the 5 wave decline from last week and today's 3 wave rally right into the fibonacci retracement level of 78.6% where it reversed at. So this suggests the Dow has topped and is in a downtrend. If not, I'm easily proven wrong with just a few Dow points higher above the 10,511 level. So the risk/reward at this point is desirable for the bears.

The Dow was the leader higher a few weeks ago when other secondary indices were lagging, i.e. the Russell 2000 and XLF, so it's possible the Dow is telling us that it too has finally reversed trend. Regardless, as I said in Friday's post, because of the 5 wave drop in the Dow, any significant rally will bring a great risk/reward shorting opportunity for the bears. That opportunity has arrived as it currently is trading at 10,430 and one now short with a stop above the 10,511 level (the start of the 5 wave decline).

In addition to the Dow's wave structure, gold and silver appear to have topped. Observe the daily gold futures chart attached and notice the blowoff top and reversal, which is typical of major commodity tops, just look at oil's surge higher to $147 last year where it reversed to around the $30 range in short order afterwards.

Also, the dollar uptrend remains intact and the series of higher highs and higher lows remains solid. However it does seem to be trading a bit sideways at the moment and losing some steam, but that may just be its way of correcting itself. The uptrend momentum may be so strong that it will correct sideways to alleviate its overbought condition, instead of actually declining to alleviate the condition. As you can see in the USD/CHF chart attached, I'm placing the 1.0385 level as the key level for the short term uptrend to remain intact. A drop below there would break the series of higher lows, and therefore warn that a larger correction was occuring. But any significant drop in the dollar would just bring about a good opportunity for dollar bulls to start establishing new positions.

So the dollar has bottomed and reversed, commodities have topped and reversed, the XLF and Russell 2000 appear to have reversed, and now possibly the Dow has finally topped and reversed. Slowly but surely market after market is reversing. Eventually it will catch up to all equities, and the reversals in stocks will be just as fierce and relentless as that seen in the current precious metals decline and dollar rally. If 10,511 is broken in the Dow, it will invalidate the 5 wave drop and suggest that perhaps a final blowoff top in stocks is occuring if the upper end of the range is solidly broken. I'll deal with that occurance when it happens. But for now, my focus is on the dollar and the Dow's wave structure.


PLEASE NOTE: THIS IS JUST AN ANALYSIS BLOG AND IN NO WAY GUARANTEES OR IMPLIES ANY PROFIT OR GAIN. THE DATA HERE IS MERELY AN EXPRESSED OPINION. TRADE AT YOUR OWN RISK.
4 comments:
Newer Posts Older Posts Home
Subscribe to: Posts (Atom)