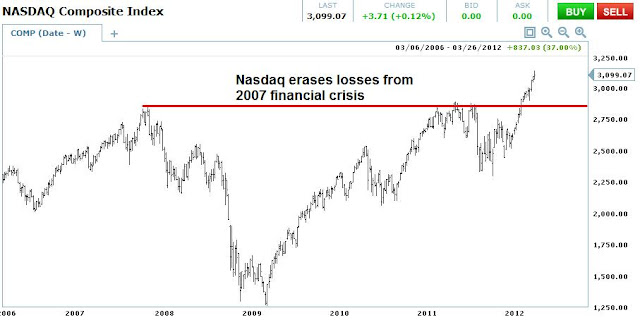 The Nasdaq has made a significant new high as it has erased all the losses from the 2007 financial crisis, but more importantly it erased what was labeled as a nice 5 wave impulsive decline.  This ws important for wavers to use in order to support the claim that a much larger downtrend was in place.  This is gone now.  And this is not good for the EWP community that was following Prechter's count.  The Nasdaq's new high may signal that it is leading the blue chip S&P and Dow higher.  Usually the higher risk stocks lead the overall market so I have to be prepared for this to be the case here.  The flipside here is that the Dow and S&P have not made new highs with the Nasdaq so there is a divergence in place.  If stocks turn down hard while this divergence is in place, then it's very bearish for the overall market.  But this is less likely to occur.  I believe that it's highly possible that the Nasdaq is simply leading the S&P and Dow higher, and they too will take back all their losses from the financial crisis and erase their 5 wave declines as well.

Remember, markets are all about probabilities.  The probabilities at this point favor the bullish side.  That doesn't mean the bears are dead, it simply means that the odds favor the bulls.  I have no position in stocks right now. 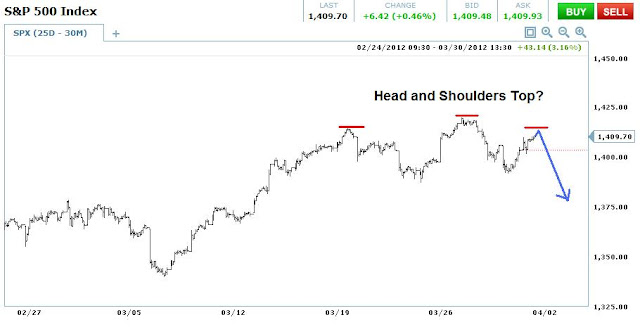 Focusing on the short term I see a possible head and shoulders top forming.  This means that the current rally is the right shoulder that should top around the 1414 area.  A move above the head at 1419 will negate this pattern and keep the rally well intact.  I am not shorting here though since trying to call a top has been foolish the past several weeks as many of you know.  I'll wait for an opportunity to arise and announce it here.  Until then, I'm focusing more on currencies as I've found more success their recently. 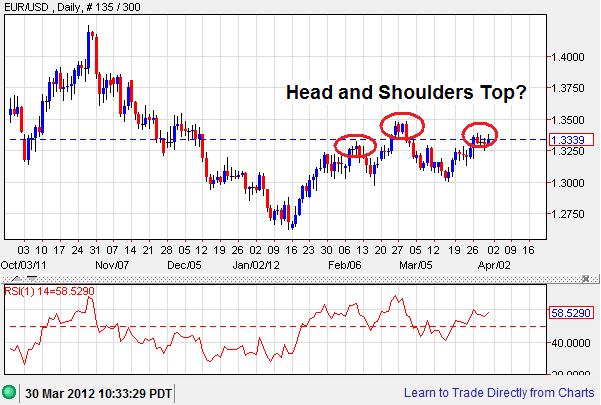 The euro appears to be forming a head and shoulders top on the daily chart.  The pattern here is much more mature and suggests a decline is coming very soon, perhaps Sunday night or Monday.  I have a small short position in place but plan to add to it if there's a strong impulsive shot lower.

What All Major Depressions Have in Common 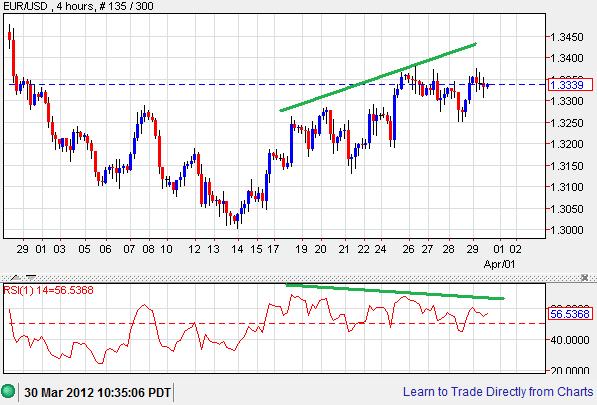 Momentum for the euro rally on the intraday charts is not good for the bulls.  The RSI is lagging badly and has not confirmed the euro's new prices highs in a long time.  This is not a good timing indicator so this doesn't mean the euro will decline right now.  But with a head and shoulders formation in place on the daily chart, I'm shorting the first sign of weakness.  Euro bears be alert Sunday night and Monday for an opportunity.


PLEASE NOTE: THIS IS JUST AN ANALYSIS BLOG AND IN NO WAY GUARANTEES OR IMPLIES ANY PROFIT OR GAIN. THE DATA HERE IS MERELY AN EXPRESSED OPINION. TRADE AT YOUR OWN RISK.
6 comments:
Newer Posts Older Posts Home
Subscribe to: Posts (Atom)