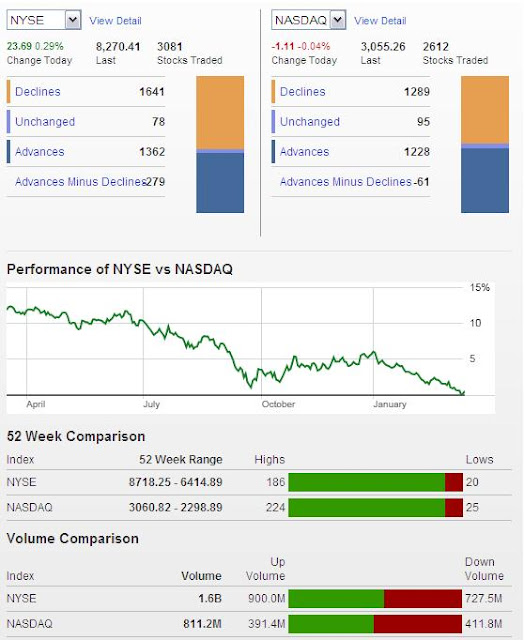 Today was options expiration day for the first quarter so volume was quite heavy, yet the net result in price was almost neutral.  Not much to obtain from internals today with that in mind. 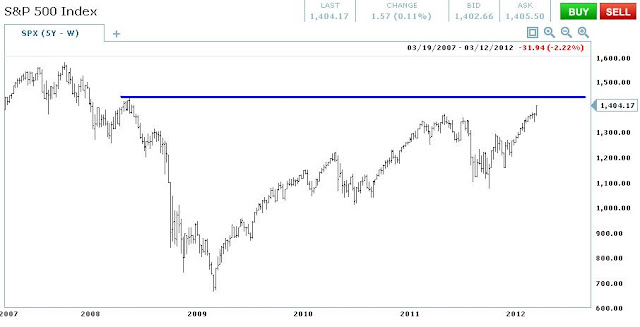 In looking for resistance, I see the 1400-1410 level as a great reversal point.  It's a previous congestion area from a few years ago, as well as a round number.  Above 1410 we have a nice zone between 1425-1440.  Although I doubt the market will make it that high, it's still worth watching in case it does.  Right now, I'm still waiting, no trades in.

Which Method Can Traders Use to Confirm an Elliott Wave Count? 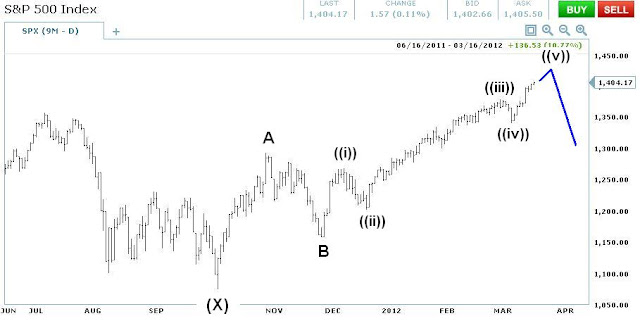 Wave (v) is currently trading at the 61% fibonacci relationship of wave (i).  Oftentimes, 1st waves will equal 5th waves, or some fibonacci combination of the 1st wave.  So again, there is another nice piece of resistance here that could repel this market toward a major selloff.

But with no solid evidence that a top is in place, we have to respect that the trend is still up for now since there is a well defined series of higher highs and lower lows.  We need to see that trend break down, preferably with a nice reversal pattern near the resistance levels I cited, before I will take a short position.  Until then, I will remain on the sidelines.

The Three Phases of a Trader's Education 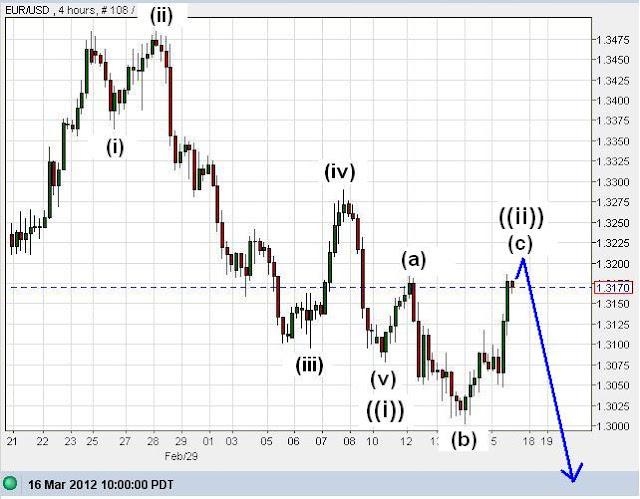 The euro is tracing out the flat correction I put in my last post.  Although flat corrections for 2nd waves are rare, it's still possible here.  The sharpness of the rise also coincides with the wave (c) labeling since C waves are impulses and therefore very strong.  I expect the 1.3200 area to cap the rally, but if it doesn't and it follows through to the upside, then another pattern is probably forming.  Most likely it will mean that the 1.3000 level was reached by a 5th wave ending diagonal instead of a (b) wave like I have labeled above.  If correct, then there's certainly room for a lot more upside.  But 1.3485 remains the line in the sand for the bearish count regardless.  As long as that level remains intact, I'm bearish the euro.

I'm not posting any stock charts tonight.  EWP has not been accurate in forecasting stocks the past several weeks and some people have expressed anger and great frustration with EWP and me, and judging by the hate mail I've been getting I think most of them simply look at the charts and don't read what I say.  So I'm going to only post words for stocks tonight.  This anger and frustration some people are feeling is usually because they are new to trading and fail to understand that no analysis is 100% accurate all the time, and it's up to the trader to determine when the probabilities, along with risk/reward ratios, are in their favor to determine when a trade is worth making.  Professional and successful traders don't have to always have a trade in place, and don't have to always know which direction the market is going.  Trading is about probabilities and risk/reward ratios, and when they're in your favor then you trade, when they're not in your favor you stay away.  Right now, EWP is not in our favor for stocks, so I'm staying away until a nice reversal pattern forms.  EWP's accuracy for stocks will return, and I'll continue to make money on swing trades when it does. 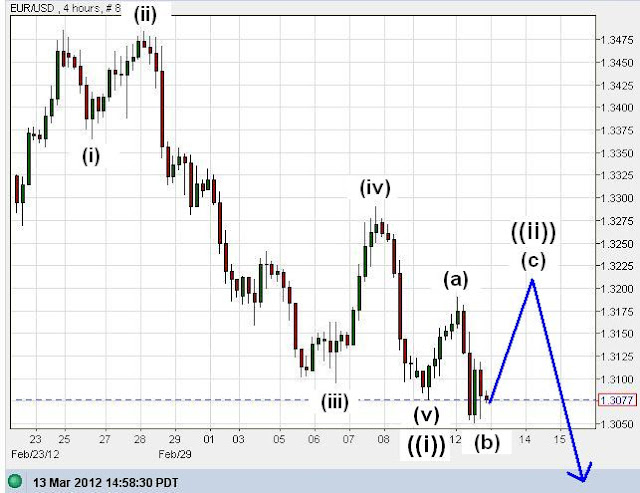 Now EWP and basic technical analysis has been much more accurate with the euro lately so that's why I've been actively trading it and am currently short right now.  The euro has declined impulsively from its high at 1.3485, and so I will bearish until price goes above that level.

There are two wave count options I see for the euro right now.  The first is posted above where wave ((i)) has completed and it is about to undergo wave (c) rally within a "flat" correction for wave ((ii)).  The story here overall is still bearish, it's only in the very short term I have to expect a sharp wave (c) rally to around the 1.3200 level before it tops and reverses. 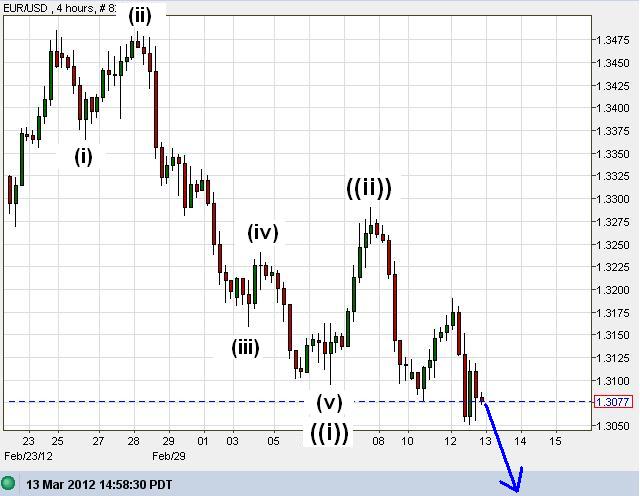 The other option is that wave ((ii)) has already completed, and a big strong wave ((iii)) down is now underway.  If correct, the euro will not hestitate to shoot lower this week.  If correct, this is a move I don't want to miss, so I have sell stops in place to catch a break out to the downside.  Utlimately risk is capped for the bears at 1.3485.


PLEASE NOTE: THIS IS JUST AN ANALYSIS BLOG AND IN NO WAY GUARANTEES OR IMPLIES ANY PROFIT OR GAIN. THE DATA HERE IS MERELY AN EXPRESSED OPINION. TRADE AT YOUR OWN RISK.
12 comments:
Newer Posts Older Posts Home
Subscribe to: Posts (Atom)