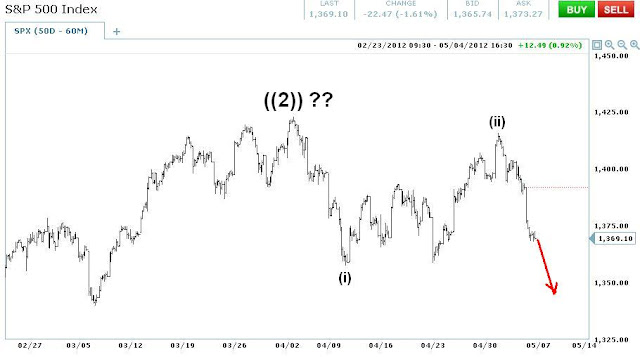 Below I list my projections and stop levels.  As long as the stop levels remain intact and nothing significant develops, this post will stand as guidance for the foreseeable future.

Just a quick note on the setup and count I put in last post.  I gave two options for wave (ii) and it's clear now that the latter count that had wave (ii) extending was correct.  The main point here is that my key level of 1422.38 in the S&P cash remained intact, keeping the short bias alive.  The downside turn from the wave (ii) high is just the beginning of a larger decline that should get to at least the 1300 level.   If I were to want to reduce risk I think that lowering my stop down to 1415.32 would be a wise choice for now.  But once 5 waves down complete for wave ((i)), I'll have to re-evaluate that stop and possibly take some profits.  But for now, my stop is 1415.32 for the risk averse. 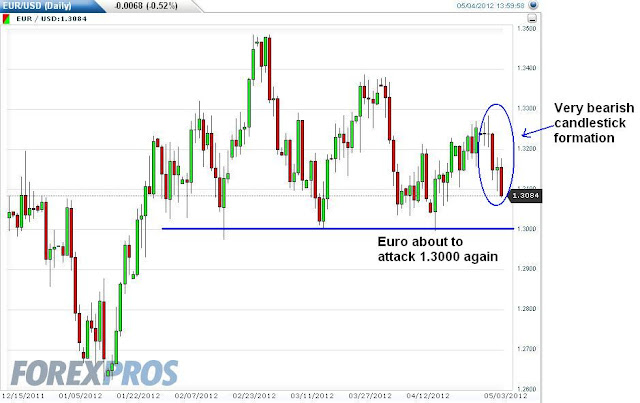 The euro has held my key level of 1.3384, and as you can see from the above daily candlestick chart, rallies have come hard faught while declines have been sharp and easy.  This suggests the larger trend is down.  The euro fell hard this week.  You see a set of reversal candles from a few days ago at the high which has been followed by some big red downside candles at the end of the week.  And today's close occurred on the low for the day.  That's all very bearish.  You can see that 1.3000 has been a solid line of support since February of this year, but the more it's tested the more the support is eroded.  I expect 1.3000 to be targeted and taken out next week.  I'm bearish with a stop just above 1.3384.

The Manic-Depressive Stock Market: What to Make of It