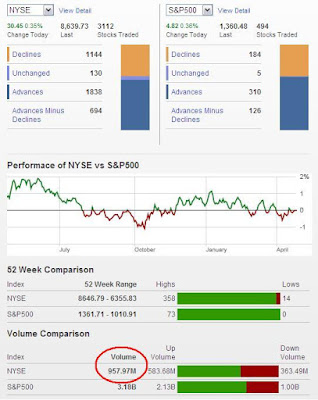 Internals were similar today as to what they were yesterday, i.e. strong bullish bias on volume just under 1 billion shares on the NYSE.  The market's float higher continues with no end in sight here.  The bears are simply non-existent and have no purpose or will right here. 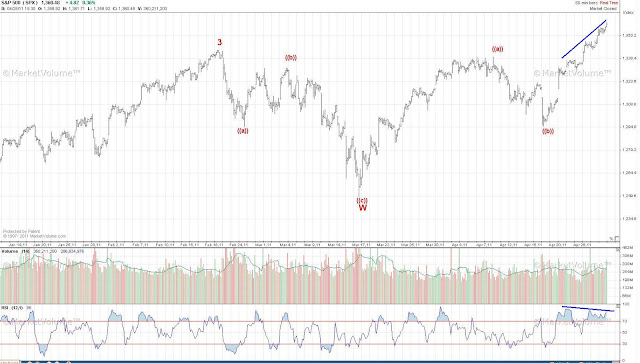 The S&P count I have for a WXY combination correction is getting quite elongated here.  But so far it seems the most likely candidate in my view if we look at present data, or perhaps simply an ABC flat correction.  At this point, it doesn't matter.  You'll notice that so far we have two 3 wave moves on our hands with an abc decline and rally, so far.  The reason I'm skeptical of this rally being an impulse wave where it's currently in a 3rd wave of that impulse is because volume and momentum indicators (RSI) are at overbought levels and showing a bearish divergence.  This is definitely NOT the characteristics expected at the early stages of 3rd waves.  There are certainly other potential wave counts, but with 3 waves down and then 3 waves up on weak volume and momentum, it suggests it's part of a correction.

The other possibility is that it's a very weak 5th wave that might end up truncated at some point, or perhaps it's an ending diagonal.  If the market holds up a few more days then this current WXY count I'm tracking is going to get bumped by a count suggesting a truncated 5th wave, or ending diagonal pattern forming.  But all-in-all, there are no signs of a top here.  So I expect higher levels ahead. 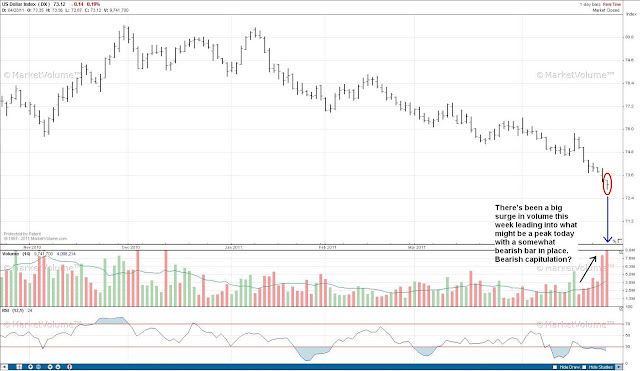 The US dollar is still dribbling lower into what will eventually be a substantial bottom and resultant monster rally.  There's been a sharp increase in volume the past week or so, a big part has to do with the Fed meeting this week of course.  But there was more volume on the dollar index today than there was on yesterday's "Fed day", and more than there's been in several months.  There was also a modest reversal bar in place today.  Nothing really convincing unfortunately, but still, something to be aware of.  With sentiment towards the dollar so extremely bearish right now, today's strong uptick in volume that's the result of a seemingly endless slow choppy dribble lower, may be a sign of capitulation and that a bottom is at hand.

I'm waiting for confirmation.  The evidence today is not nearly enough.  I want to see a sharp 5 wave rally and some swing highs broken.  Until then, I'm neutral. 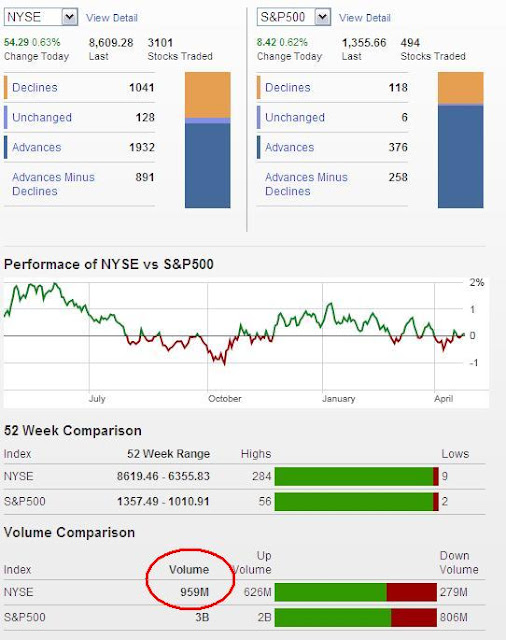 Stocks traded very well today.  They started off floating higher and continued a slow methodical and healthy move higher without much volatility during and after the Fed action today.  This is either a great stepping stone for the bulls, or a big fakeout made to lull the unsophisticated bulls to sleep as the bears pull the rug out from under this market tomorrow.  I see no evidence of that happening though, so saying it will happen would simply be a guess.  Right now the evidence suggests the uptrend is still intact and higher levels will be achieved. 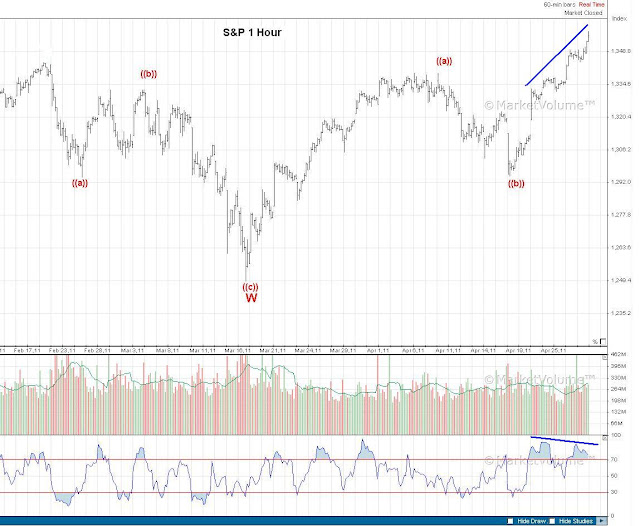 With diverging momentum on the RSI, weak volume, and fairly optimistic sentiment, it's hard to think that the S&P is at the start of a 3rd wave higher which the bullish count might suggest.  Instead it still fits well with the combination WXY correction I've been tracking the past few weeks.  The X wave is a flat correction that will give way to a sharp 3 wave drop for wave Y.  But with the market looking strong at the moment, I'm not going to gamble on a short position here though.  I'd rather be long here with a VERY tight stop if I absolutely had to take a position.  But I don't, so I'm neutral at the moment. 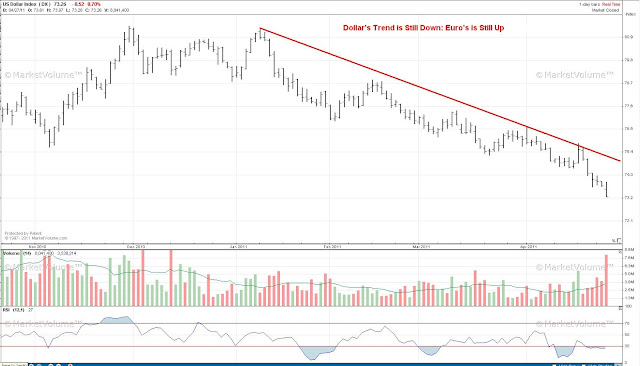 The dollar's slow choppy grind to new lows the past several weeks has been quite tidious to watch since I'm waiting for a major dollar bottom and reversal.  But as you can see here, there are no signs of reversal at the moment.  Today's big volume was a result of the Fed action, and a nice sharp rally tomorrow might be a sign that today's decline was a capitulation move, meaning that a bottom is in place.  So a sharp rally in the dollar (sharp decline in the euro), would get me long the dollar and/or short the euro.  Until then, I'm neutral the buck.

Market Should Float Until Fed Time; Euro Position Stopped Out 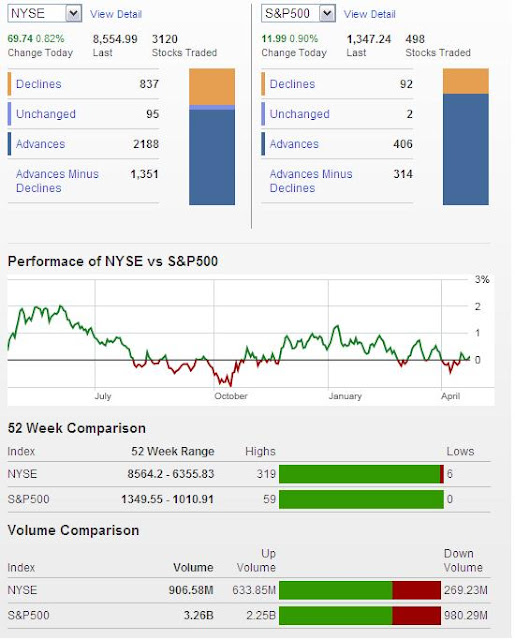 Waiting on shorting stocks until I got more evidence of a top proved to be a wise move.  However rolling the dice on the euro and shorting it prematurely yesterday was NOT a good choice.  Volume today was light overall, but much higher than yesterday's almost non-existent volume which was under 700 million shares on the NYSE.  Trader's are waiting for the Fed tomorrow before big volume moves occur I'm sure.  Tomorrow we get an early morning Fed announcement followed by Bernanke's face and speech.  So there should be increased volatility tomorrow and Thursday.  Be ready.....I'm looking to short when the opportunity arises.  At the moment, I am not short stocks or the euro though.  But that could easily change tomorrow/Thursday.  Be ready.

How To Trade Market Sentiment 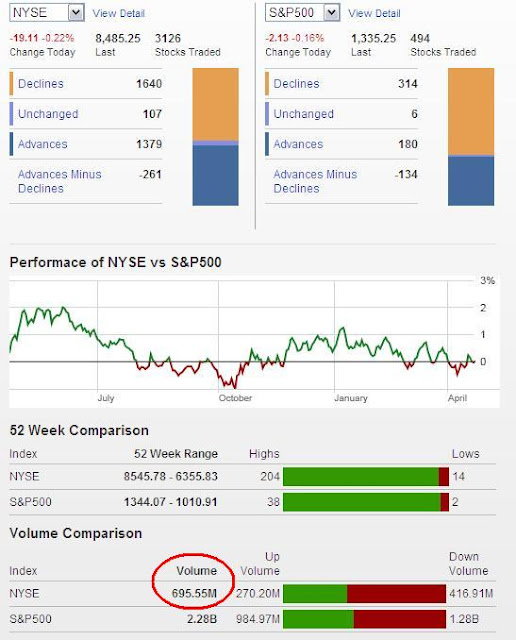 Internals today show us a very interesting picture when you take into account the VIX stock sell signal in place right now.  Volume on the NYSE has to be one of, if not THE, lightest volume days of the year at less than 700 million NYSE shares traded today.  I know many traders are filled with ham and pies after the Easter holiday and are waiting for the Fed meeting this week, but still, 695 million shares.....that's some light volume, and a telling picture of how attractive the stock rally is at these levels.  Things should get exciting again when the Fed speaks later this week.﻿ 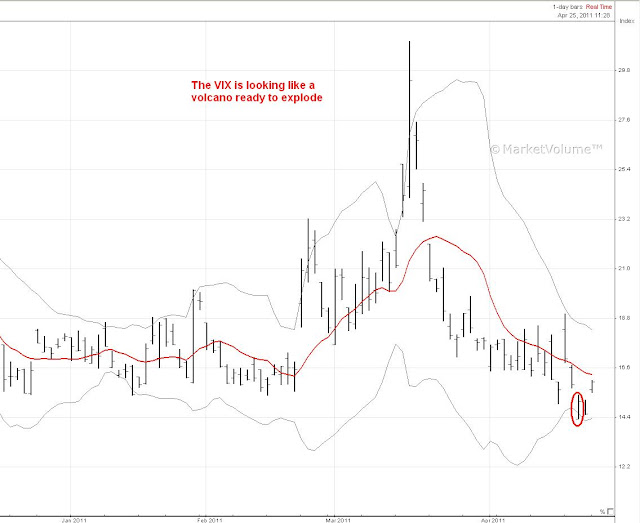 The VIX closed beneath its lower bollinger band last week and then closed back above it shortly after.  This is considered a stock sell signal which is often pointed out early by Elliott Wave International's Steve Hochberg.  Lately, this stock sell signal has not worked well, so I'm counting on it loosely here.  When it does work, there is usually a 2-5 trading day delay between when the signal executes and when a sharp selloff occurs.  So in that respect, a sharp selloff should ensue anytime between now and Wednesday, more or less.

How To Trade Market Sentiment 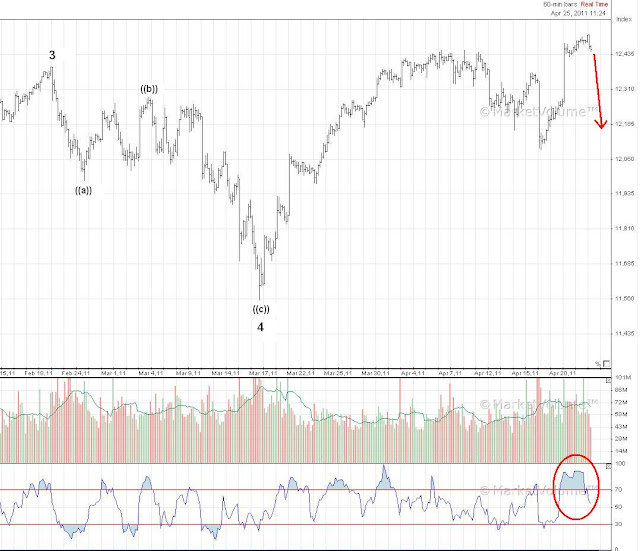 We've been here before wavers, and the short term we often get right, but then we end up getting our faces ripped off when we hold our short positions too long in hopes of the decline turning into a larger Primary wave ((3)).  This is why I insist on only playing the short term action and trailing stops, this way if the decline turns into something real big then there is a good chance we'll ride it all the way down anyway.  But if it's another fakeout, then we can protect capital with the trailing stop.  Right now the market is setup again for at least short term pullback soon.  The RSI is falling off a cliff and a small 5 wave rally appears complete, and when you combine that with a VIX sell signal, it suggests at least a modest pullback.

There are two things to keep in mind here for the bears:

1) the uptrend is not broken yet, so shorting here is very speculative and very risky.  More conservative traders might want to be patient and wait for confirmation, or at least some evidence of the uptrend breaking down before taking a position.  That's what I'm doing.

2) From the Minor wave 4 bottom there is not a clear 5 wave move higher, suggesting the rally is not over yet.  Sure, one can count it as a 5 wave move and complete, but it definitely wouldn't have the "right look", which is an EWP guideline.  So expecting a top here from an EWP purist standpoint would not be wise.

With all said and done, my thinking on this is that it's quite possible the market is forming another top (at whatever degree), but with too many loose ends here, I'm waiting on the sidelines for more evidence that the uptrend has in fact broken and that the short side should be favored. 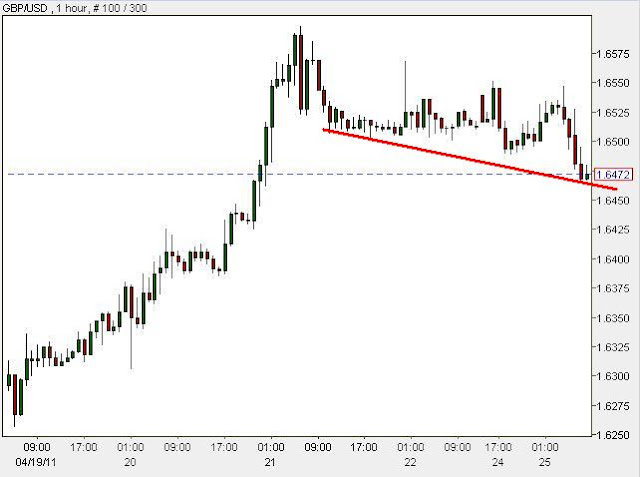 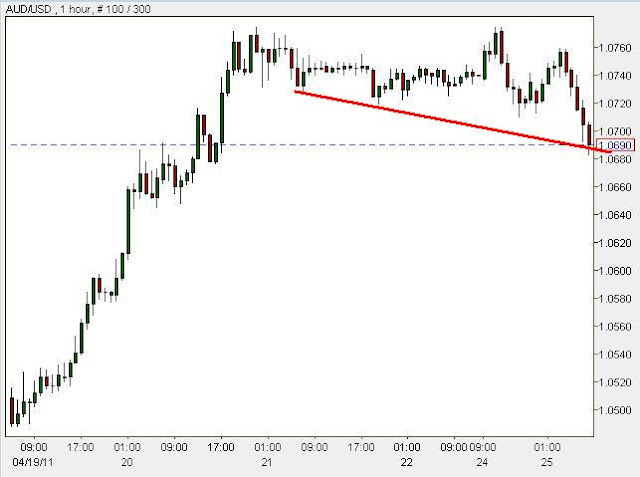 On the other hand, the currency majors appear to be breaking down.  The euro is sitting on a support shelf while the AUD and GBP have already broken down it appears.  Since the currency markets are so highly leveraged I tend to take more speculative positions since waiting for confirmation would make placing stops too far away for comfort.  I'm shorting the euro now with a stop just above last week's high.  Although this is a very speculative position I'm taking here, I think the potential reward is well worth the risk since the euro's larger trend is firmly down and I expect it to eventually get to parity once that larger downtrend resumes.