Headlines are Doomy and Gloomy 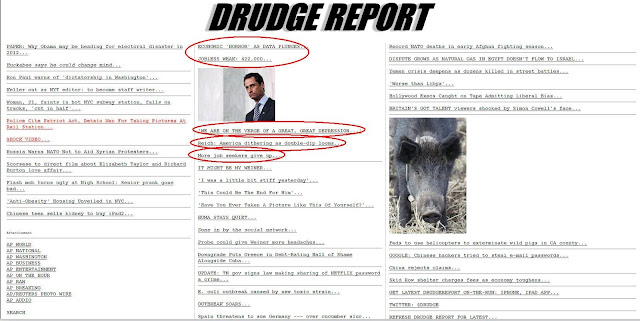 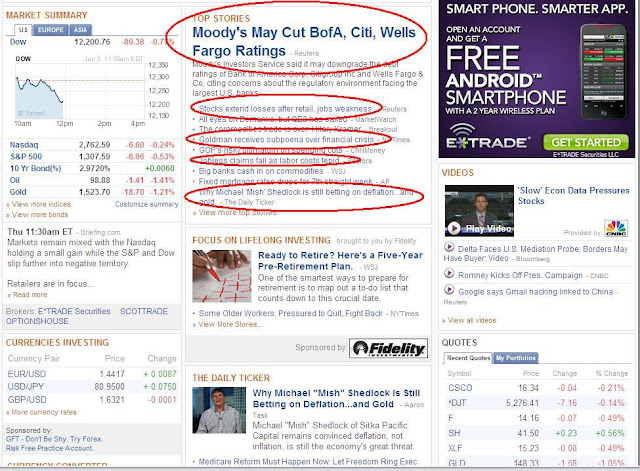 News headlines are looking awfully bleak this morning.  I said yesterday that I expected some follow through to the downside this morning and I'd take profits when that happened.  Well that's exactly what we got, and taking profits seems like a good idea with these gloomy headlines above.  I'd still keep some position on short, but I'd trail the stop down with the market.  It's approaching oversold on at least a short term basis pretty soon.

Bottom line: The market has fallen so much so fast that we are approaching oversold on a short term basis.  When you combine that with the gloomy news headlines we see this morning, I'd like to take some profits here to protect gains, and then trail my stop lower as the market heads lower.

PLEASE NOTE: THIS IS JUST AN ANALYSIS BLOG AND IN NO WAY GUARANTEES OR IMPLIES ANY PROFIT OR GAIN. THE DATA HERE IS MERELY AN EXPRESSED OPINION. TRADE AT YOUR OWN RISK.
1 comment: 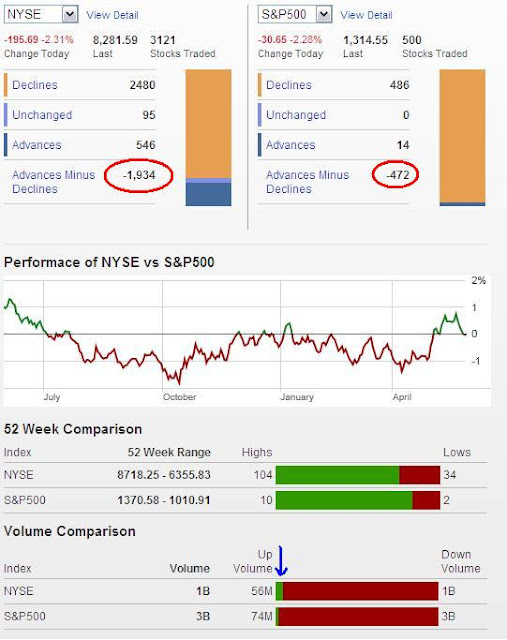 Stocks took a pounding today with the Dow losing almost 300 points and S&P losing over 30 points and closing on their lows.  It was an across the board selloff as all the major indices/sectors were punished with exception of the safe haven sectors Staples, Utilities and Health Care down the least.  Internals in the overall market were also bloody as declining stocks, and declining volume, well exceeded the advancers.  Normally there is a relief rally after such a bloodbath internally, especially since today is the first day of a new month.  But seeing as that the downtrend was held intact yesterday by failing to make a new swing high, and today's S&P close was right at support, it's quite possible we'll get some good follow-through to the downside tomorrow, especially in the morning. 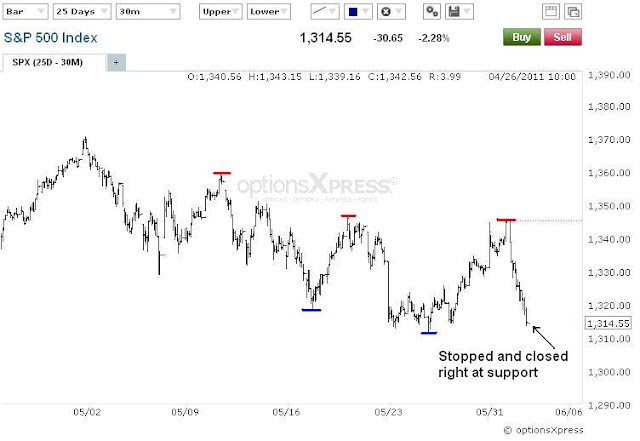 Yesterday the market's rally came dangerously close to making a new swing high which would break the series of lower highs, and therefore put the overall downtrend in serious jeopardy.  After that failed new high, the market sold off sharply today.  Those of you who took advantage of the bearish side for a short term risk/reward trade like I mentioned yesterday did real well.  And I think the market will continue lower through the current support level at least through tomorrow morning.  From there, getting an over 300 point Dow drop in less than two days would be good enough for me to exit at least some of that short term trade.  Since the longer term trend still seems to be up since we don't have an impulsive decline yet, I'm still leary about getting too aggressive on the bearish side too long.  So very short term, I'm still bearish, but longer term I'm cautiously bullish. 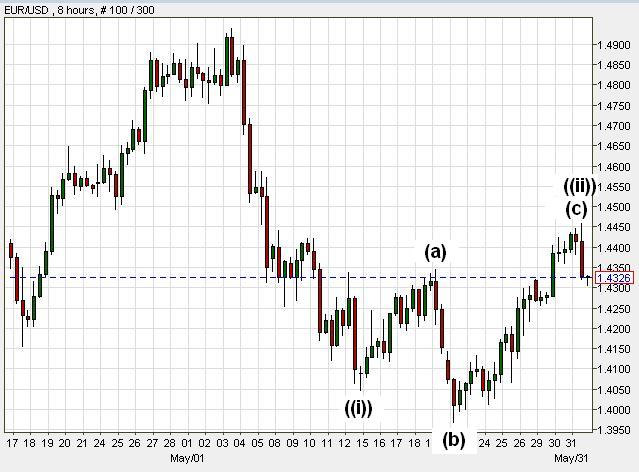 I changed the degrees of waves up one notch since the flat correction I've been tracking has really expanded here.  I mentioned yesterday that I wanted to see if the euro followed through higher, or reversed and broke down lower, in the overnight session.  Well it didn't really do either last night, but today it showed some shakey legs before finally falling late in the trading day.  Other counter US dollar pairs like the AUD/USD and GBP/USD were punished much more than the euro, so looking at the EUR/USD alone for overall US dollar action wouldn't give you a comprehensive picture.  Looking at the big picture, the US dollar appears to be getting its legs back again and poised to rally hard here which means the euro should fall hard.  And looking at the euro's wave count here it suggests that a wave ((ii)) top is in.  This means heavy selling directly ahead for wave ((iii)) down.  I remain firmly bearish this pair as long as yesterday's high remains intact.

How to Put the Wave Principle to Work

In the video below, EWI Senior Commodity Analyst Jeffrey Kennedy walks you through a basic checklist of how to put the Wave Principle to work. This clip was taken from The Wave Principle Applied webinar, originally recorded for Futures Junctures subscribers.
Get 45 pages of FREE practical lessons in Elliott Wave International's Best of Trader's Classroom eBook

Would you like to learn more about trading with the Wave Principle? Get 45 pages of FREE practical lessons in Elliott Wave International's Best of Trader's Classroom eBook . Taken from Jeffrey Kennedy's renowned Trader's Classroom series, this FREE 45-page collection offers 14 actionable lessons that will help you determine entry points, stop levels and price targets for the markets you trade. 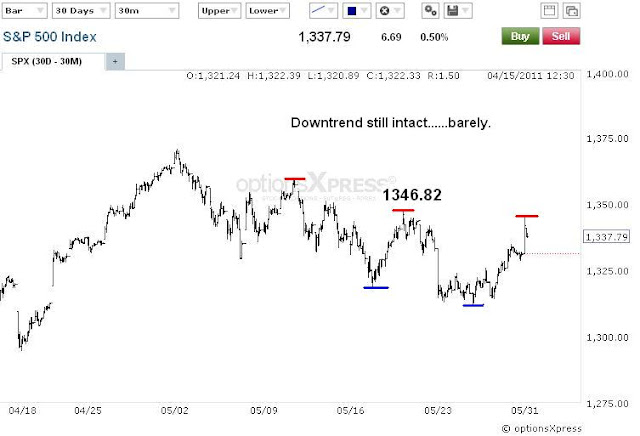 Stocks' downtrend remains intact by the skin of their teeth.  Today's rallys stopped short of making a new high above 1346.82 in the S&P.  So the series of lower highs and lower lows is still in place, and therefore the downtrend remains in place.  Shorting here against 1346.82 would be a good risk/reward trade for the bears.  Although in the bigger picture, with no clear wave count in place, and certainly nothing impulsive looking, I think this downward action lately is all part of a correction that will result in a move to new highs on the year eventually.  So if I were short, I'd play it tight here and only for the short term action.  Longer term the market still seems bullish.


How to Put the Wave Principle to Work

In the video below, EWI Senior Commodity Analyst Jeffrey Kennedy walks you through a basic checklist of how to put the Wave Principle to work. This clip was taken from The Wave Principle Applied webinar, originally recorded for Futures Junctures subscribers.
Get 45 pages of FREE practical lessons in Elliott Wave International's Best of Trader's Classroom eBook 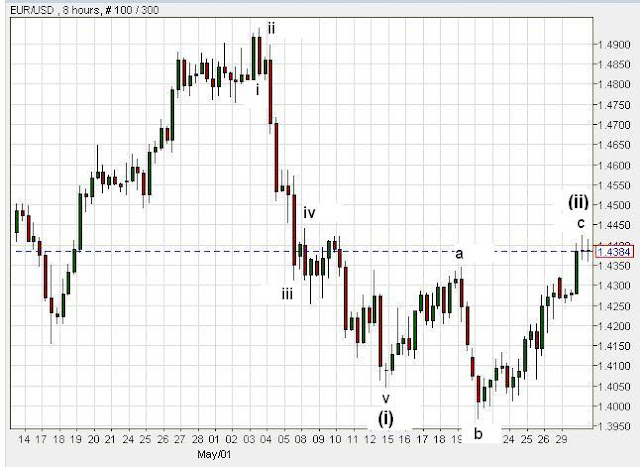 The euro's rally has gone much deeper than I would have liked to see for my impulsive count to remain in high confidence.  Breaking out to a new high makes this structure shown above look very similar to what we saw in November 2010 to January 2011 where most wavers were trying to label a clear 3 wave move as an impulsive decline. The result was a confirmation of the 3 wave decline being a correction and a sharp and long rally to new highs ensued for months.  Well this structure above on the 8hr chart is starting to look a lot like that structure on the daily chart I just mentioned.  If correct, then my count above is wrong and the euro is getting ready to blast off higher again.  But we'll see.  I'm not as convinced of the euro's bullish potential like I am for stocks.  So I want to see how the euro trades the rest of the day and into the overnight session tonight.  Follow through to the upside would knock me out of the short side and put me on the sidelines.  But a reversal lower would keep me firmly bearish.