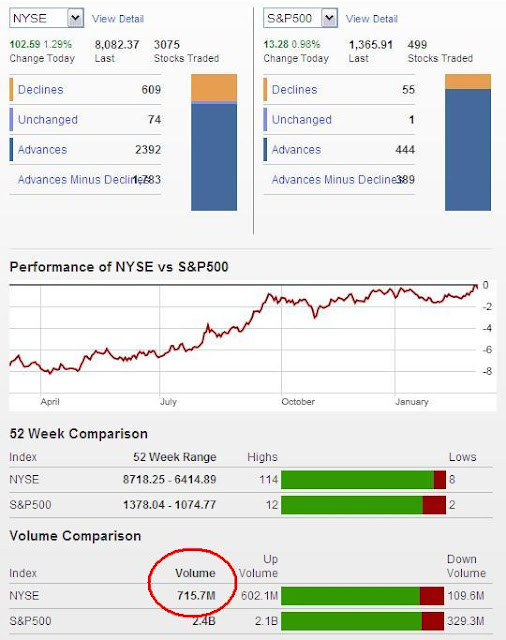 Internals today continue to support the bigger bearish picture in that volume is not supporting the rally and therefore the rally has no legs over the long haul.  However, in the short term, the wave structure indicates a new high is probably coming before a major reversal occurs.  Volume declined again to 715 million NYSE shares on a rally move today which is far less than the 876 million shares that accompanied the decline earlier in the week.  Unfortunately for the bears though, 876 million is still a small number overall.  I'd like to see volume break 1 billion to gain confidence in future direction.  Most likely that type of volume will occur on a huge down day in price.

Which Method Can Traders Use to Confirm an Elliott Wave Count? 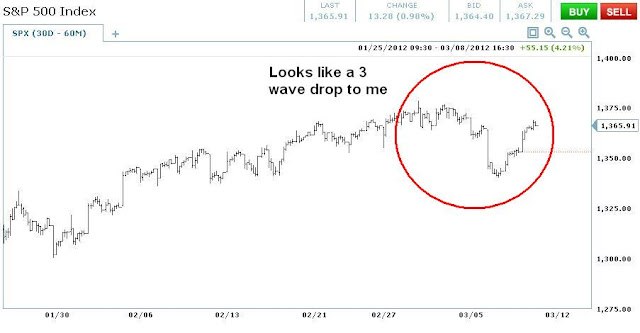 Although I'm short now and am looking aggressively for shorting opportunities only, I can't overlook the fact that from an EWP perspective, the recent decline looks like a 3 wave drop which is a correction.  No worries though, it was probably just one of the fakeouts I mentioned would probably occcur as a major top forms.  Patience rules the day.  Once I notice a high confidence reversal pattern is in place, I'll mention it here.  Until then, I'm waiting to add short. 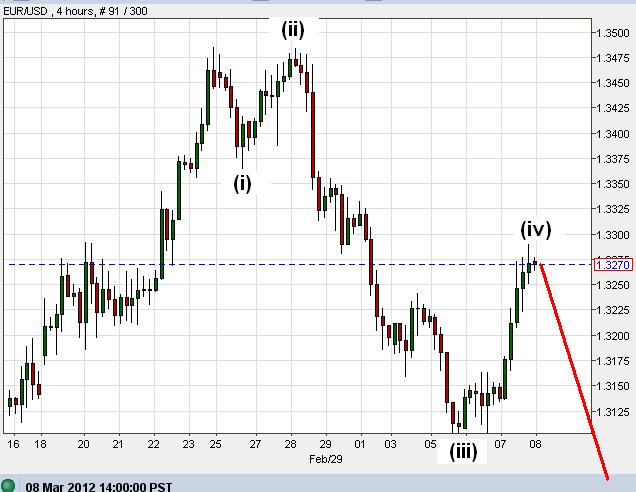 The euro is probably correcting in a wave (iv) as I labeled above.  If correct, it needs to fall almost immediately because wave (iv) is getting a bit stretched relative to wave (ii).  Prolonged rallying probably means I have this mislabeled, but the alternate counts are still very bearish.  Bottom line, look for the euro to continue lower soon.


PLEASE NOTE: THIS IS JUST AN ANALYSIS BLOG AND IN NO WAY GUARANTEES OR IMPLIES ANY PROFIT OR GAIN. THE DATA HERE IS MERELY AN EXPRESSED OPINION. TRADE AT YOUR OWN RISK.
4 comments:

Today's Weakness is a Good Opportunity for the Bears; Euro Trend is Firmly Down 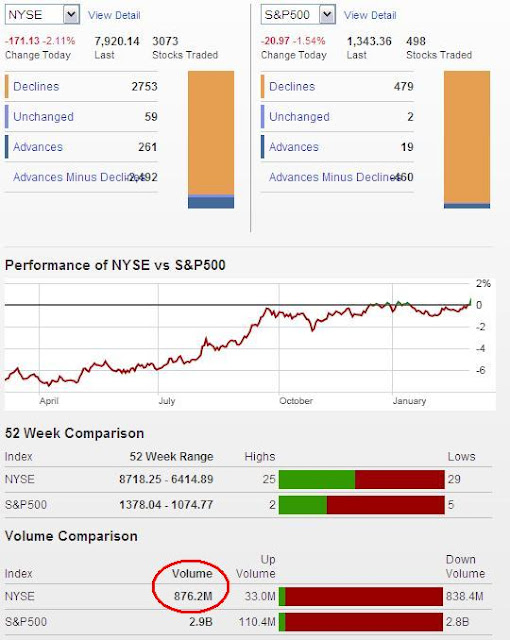 Today's reversal was decent from a bearish perspective since the decline is unfolding impulsively after the market internals and momentum are beyond stretched and tired.  This suggests more downside is to come.  Also, down volume was 95.7% of total volume on the NYSE today, so it was all selling all the way today.  Looks like a lot of profit taking of people who have done well on the recent rally and want to reduce risk here at these levels.  So all it takes today or tomorrow is a small fear jolt and this delicate market will crumble as those who didn't exit yet but are thinking about it, will rush for the exits and take profits at the next sign of trouble.  Total volume increased by 25% today compared to yesterday, which is good for the bears, but overall it's still a very light number so let's not do a cartwheel just yet.  I doubt a major top like the one labled in EWP below will occur this easily, so be prepared for some fakeouts and disappointments.  Always manage risk assuming you're wrong whenever you place a trade. 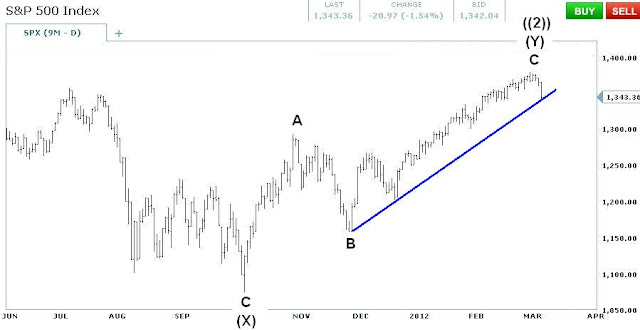 In addition to total volume being a bit light for such a major top perhaps forming, another piece of evidence isn't exactly very bearish.  You can see that today's decline is sitting right on an ascending trendline established from late last year.  The market may bounce from that trendline tomorrow, but ultimately it should crash below it and open the door to the possibility of heavy selling.  A nice close beneath this trendline in an impulsive structure would be a great sign that top is in.  I shorted small already since the risk/reward is so favorable here, and because I've been on the sidelines for so long.  But I will pile on the short side more and more as the evidence mounts that a top is in fact in place.

R.N. Elliott Discovered the Wave Principle Over 70 Years Ago 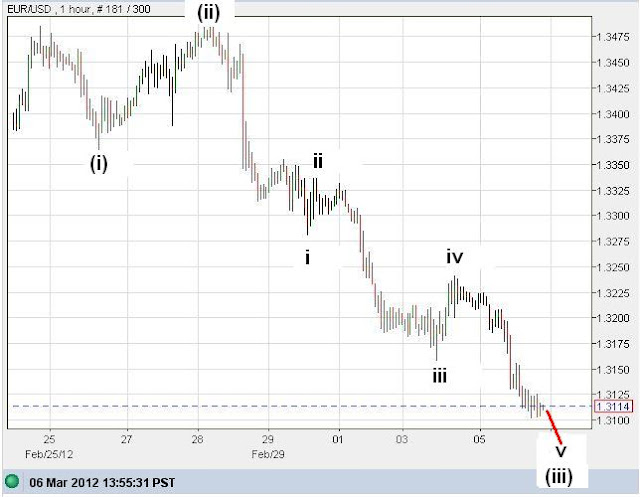 The euro followed the wave count I put up yesterday as it continued lower it what is probably a wave v within wave (iii).  As long as the euro continues following the basis of this wave count I will continue to use it and trade with it.  3rd waves tend to do whatever they want, and they often extend, especially within their 5th wave which the euro is in right now.  I'm holding short, expecting lower levels for the euro in the days ahead. 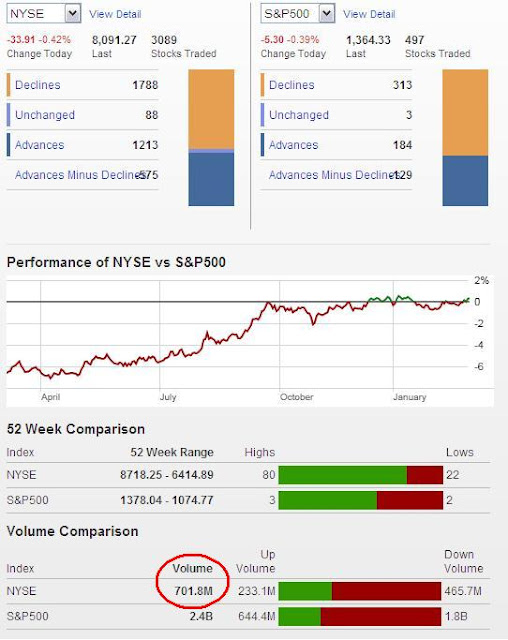 Nothing has changed from my post, charts and the wave count remain static.  I'm still waiting for a reversal pattern and impulsive move to the downside so I can establish a position.  I've been on the sidelines for weeks now, simply waiting.  Volume continues to be light with today barely breaking above 700 million NYSE shares.  Tough to trade with volume like that, unless you're a daytrader which I am not.  One of many signs that this rally has no legs is that volume has left a long time ago.  The next move of consequence to provide traders a good solid opportunity should be to the downside.  But we have to wait until the market is ready.  But I'm on high alert....looking for signs of a reversal, knowing that many others are doing the same so there will probably be a fake out or two to the downside before the real heavy selling gets underway.  So as always, I'll be managing risk appropriately and looking for a shorting opportunity. 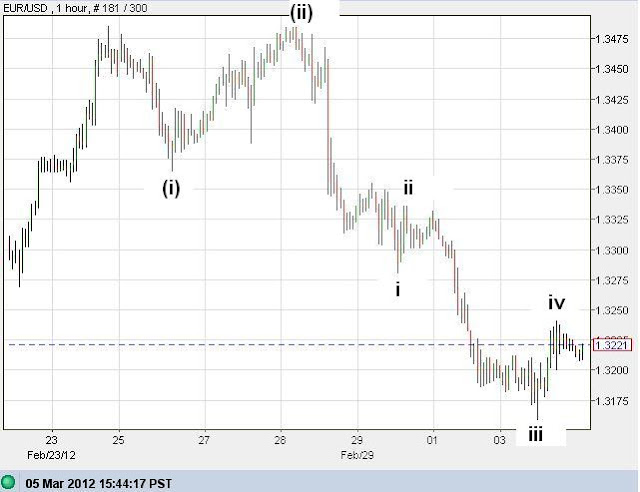 The bottom line is that the euro appears to be falling impulsively.  Being so early in the decline makes it hard to determine the degrees of trend with high confidence, but the subdivisions of the move is undoubtedly impulsive nonetheless.  So the path of least resistance for now is down.  The euro should not exceed 1.3485 in the near future, so shorting with stops just above that level seems like a good opportunity to me, especially if a big rally occurs from current levels which would allow me to short at a better price.