Decline Should Continue Short Term, Then Sharp Rally; May 16, 2009 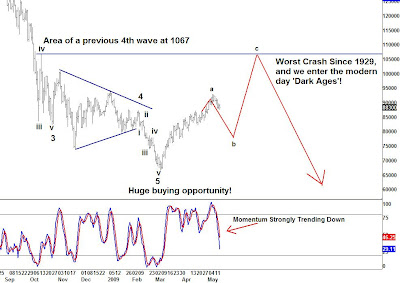 Above is the current daily S&P futures chart I've been showing that illustrates my projected path for the market over the coming weeks. As you can see, I expect further declines in the short ter into the congestion area of 770-820 where we should bottom and rally hard. If it's a wave C it will be an impulse rally and almost straight up, much like wave A from the March lows. That will be the final rally wave of the year and will bring about the shorting opportunity of a lifetime. From there, armaggedon will ensue that should draw the S&P down to at least the 400s!

So I'm on close watch for signs of this major top occuring; but as of now I don't see it. First and foremost the current rally is too small in size and short in time compared to the year and half decline preceding it. But also, I'm not seeing enough optimism in this market to suggest a major top is in. Too many mainstream talking heads are still skeptical of the rally and some suggest taking profits because this rally's gone too far too fast. This is not the behavior of a market top. I feel that this current short term decline will satisfy the corrective requirements these talking heads want in order to believe this market is in a healthy bull run, and so when the market bottoms around 770-820 and we undergo a fast and ferocious wave C rally toward the 1067 level, everyone will be jumping on board the bull run to catch the next bull market to S&P 3000! BUT THEY WILL BE WRONG. IT WILL BE ONE OF THE BIGGEST BULL TRAPS IN HISTORY, AND THE MARKET WILL GIVE WAY TO THE LARGEST AND FAST COLLAPSE SINCE THE 1920s-1930s!

I'm not going to miss that. My current strategy is that same. I'm double short the S&P cash by using the SDS and selling call options to collect premium. As the market falls, I sell for profit, and as it rallies I add to my short position. The largest trend is still down so I will play the long term downside potential for now. If I see a bottom forming in my sited 770-820 congestion area, I might try to go long conservatively. But for now, I remain short using a covered call strategy.

As for gold, it continued to push higher and my patience is at an end so I exited my remaining short position. With that in mind, the cruel market gods will probably send the metal collapsing lower Monday just to taunt me. But I need to find more profitable endeavors with my capital and I think the stock market structure is more clear and more volatile to where I should focus more on it. For now anyway.
3 comments:

I cashed in my gold butterfly as it was well in the green with all this sideways action in the metal the past few weeks. The break above $920 caused me to stop out half my position at a loss which was minimized by the butterfly position. Gold's technicals still look week and I expect it to fall to the lower $800 area soon so I'm holding on for now with a stop at $950 on the rest of my position.
No comments:

S&P Should Continue to Weaken Before Final Rally of the Year; May 14, 2009 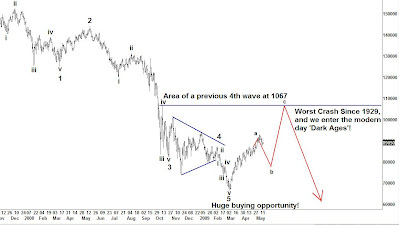 I am not trading aggressively or short term so my posts have not been as frequent because I'm playing the longer term picture which is show in the above daily S&P futures chart. The rally that started early March is almost a straight line but can easily be counted as a 3 wave advance. It's much too small in price and time for me to strongly consider the major rally over and the big wave 3 or C down underway right now. If it is a 3 wave rally, and wave 3 or C down is not underway right now, then it leaves two top counts:

Whether we're in a B wave or an X wave to me is irrelevant at this time. Both wave are the hardest waves in EWP to count. What I do know by using other technical indicators and internal strength data of the market is that a top at some degree has most likely formed at 929.50 and a decline of a decent magnitude is underway. I continue to short the S&P using the double inverse ETF in the SDS and selling call options to collect premium as I play the longer term action.

The real opportunity will come if I can see the another bottom forming and the final last rally of the year which should push to the 1067 S&P level before topping and the opportunity of a lifetime presents itself with a major major major shorting opportunity with a risk/reward ratio that won't be seen for another 70+ years!
No comments: 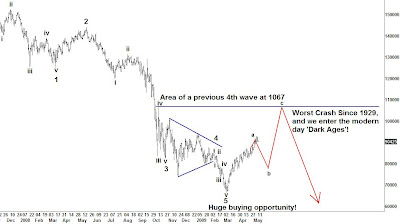 Just an update on the daily S&P count. So far the market is playing out as projected in the above chart. I expect a decline in a wave B before it rallies to a new high for wave C around 1050. That rally will bring about the shorting opportunity of a lifetime.

The next decline will be a wave 3 or C of a huge scale, so either way it should be a ferocious decline.
1 comment:
Newer Posts Older Posts Home
Subscribe to: Posts (Atom)