Stocks Putting us to Sleep......Before the Collapse? Euro Surprises to the Upside, Shorts Squeezed 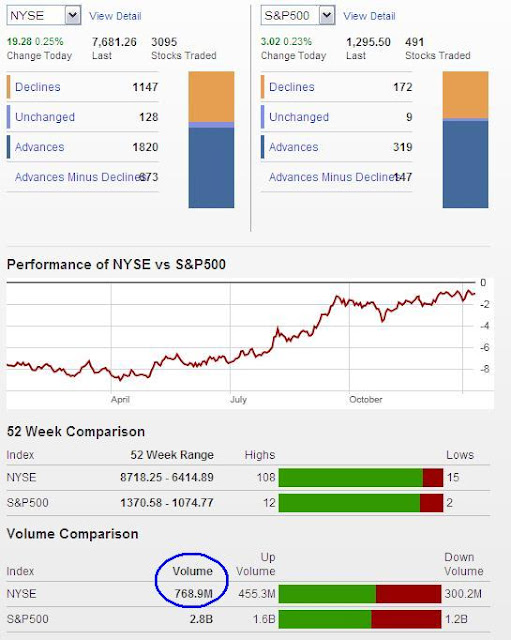 Stocks are putting me to sleep.  Thank goodness for currencies which have been moving sharply lately.  NYSE volume was a whimpy again today with only 768 million shares traded, and uppers vs downers slightly tilted toward the bulls' advantage.  Nothing to really make of this though with such light volume and little price movement.  Both the bulls and the bears appear to have better things to do, or they're all in room with a carbon monoxide leak.  Either way, when volume re-enters, the downtrend should resume.  Until then, try to stay awake.

The European Debt Crisis and Your Investments 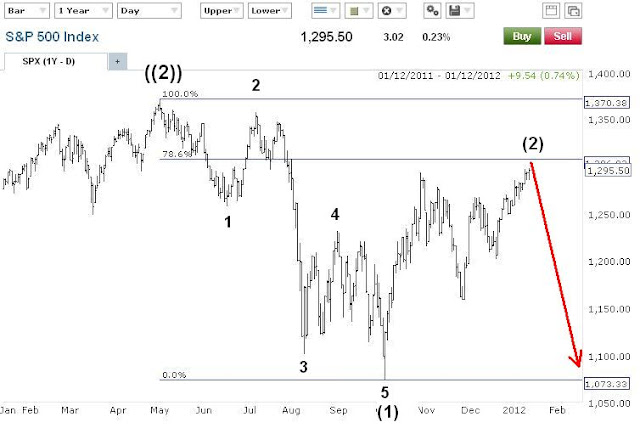 The S&P continues to defy gravity and as a result, it's starting to concern me slightly as a bear.  I would have thought the market would have tanked by now but it's been holding up fairly well, albeit without any volume which is still significant.  Price is near the comfortable maximum retracement level of 78%, so a decline now would be nice.  I still doubt the market will push much higher from current levels, a pullback of some kind is warranted before any further significant push.  So the short term advantage goes to the bears to enter on weakness as soon as it arises in my opinion....especially if volume accompanies the move down.  The count above remains valid and my top choice. 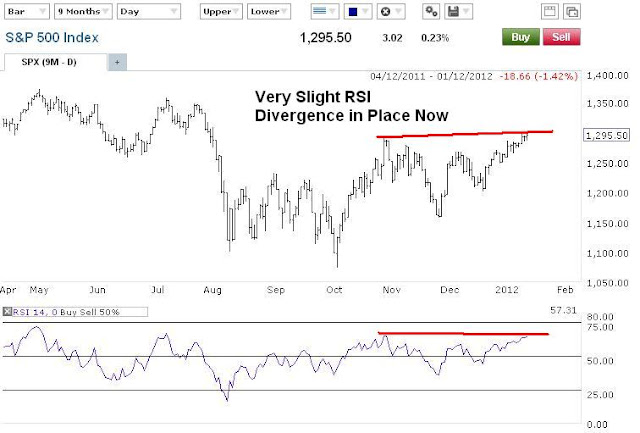 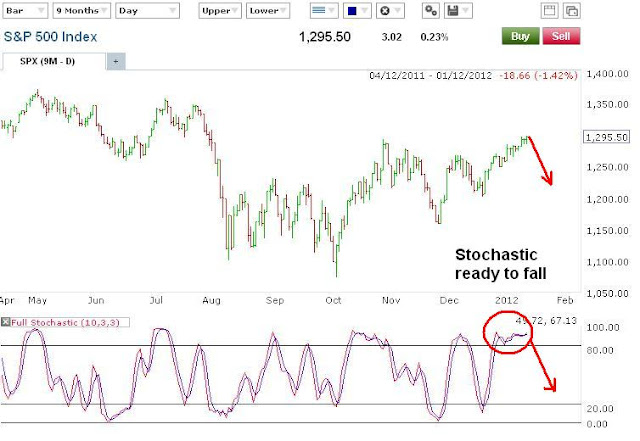 Momentum indicators above slightly favor the short term topping outlook the wave count suggests.  The RSI has a very slight divergence in place right now to where a decline from current levels would confirm the divergence and open the door to the possibility that a very large decline is underway, such as the wave count suggests.  Also, the stochastic has been grinding away in overbought territory for a while.  Another sign of at least a short term pullback is near.

With the evidence at hand, it seems quite clear that at least a short term pullback is coming soon.  So if I were to play this market short term I would be looking to short on weakness any minute.  And if high volume accompanies the move, I'd load up even more short.  If I were to play this market more long term, I'd wait for the structure and strength of the upcoming pullback, mainly to see if volume consistently accompanies it and the decline is impulsive.  If so, I'd get short for a longer term position. It's important for the longer term traders to be patient if a decline comes because the market may be simply "recharging" before surging higher again.

Download "The Most Important Investment Report You'll Read for 2012" Now. 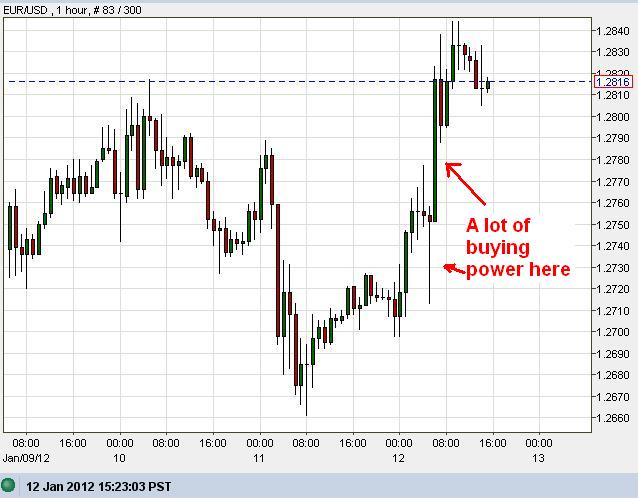 With a high confidence euro count still eluding me, I have to rely on basic technical indicators.  And for the past several months, despite their simplicity, these indicators have worked very well for me.  The key element to the euro is the impulsive structure of the declines, and the series of lower highs and lower lows which has been the theme lately.  Unfortunately for the bears. last night broke that pattern, and the bulls did so with strength.  You can see the area where I marked the euro's bullish candles on the above chart.  You have a long wicked bullish candle immediately followed by a long bullish candle.  And what's significant is that this big strong move occured at the previous swing high.  So the bulls broke the downtrend with conviction last night, at least for the short term.

I personally think this was just a short squeeze.  I think there were just too many euro bears in the market and they got squeezed last night.  But nonetheless, the basic trend following I'm using suggests a bottom is in for the euro for the time being.  Until another big reversal pattern occurs to the downside, or an hourly close beneath 1.2700 occurs to negate the big bullish move last night, I'm on the sidelines. 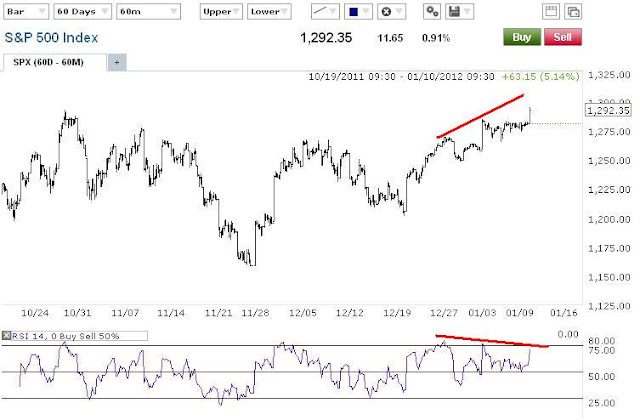 The S&P continues to float higher, but nothing changes from the previous forcast.  There are numerous internal divergences to price occurring, along with momentum divergences like the RSI as seen above.  Volume remains very light as well.  There is really nothing behind this rally at all in my opinion.  Those types of rallies usually end with a big reversal, so be aware in the coming days.  With the evidence at had, it seems clear to me that this move is part of a correction, and probably the final stages of a correction.  The bears are lying low and waiting for a good opportunity to strike.  Meanwhile, the few people in the market are able to float it higher.  Look for a sharp reversal at any moment, that will bring a good shorting opportunity in my opinion.  I will get short as soon as I can and place my stop just above the top of that reversal.

Download "The Most Important Investment Report You'll Read for 2012" Now. 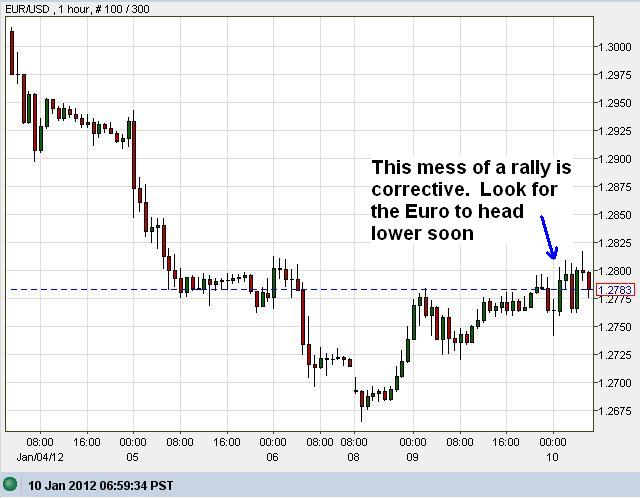 The euro has managed to get of the matt a bit here and push a little over 100 pips higher from its low.  But you can see that after the initial push to 1.2780, the rally has lost steam and moved choppy and almost sideways.  Today the rally appears to be faltering and is trading right at the top of that initial surge at 1.2780.  A solid break below that level will be the first sign the rally MIGHT be at an end.  A sustained break below 1.2720 would most likely signal another major top is in.  But I'm not waiting for that.  I'm already adding short right now, and if it rallies higher then I'll short some more.  Nothing about the euro's charts or the overall European and US economies suggest a euro bottom (US dollar top) is in place.  So I'm focused on the short side big time right now.


PLEASE NOTE: THIS IS JUST AN ANALYSIS BLOG AND IN NO WAY GUARANTEES OR IMPLIES ANY PROFIT OR GAIN. THE DATA HERE IS MERELY AN EXPRESSED OPINION. TRADE AT YOUR OWN RISK.
7 comments:
Newer Posts Older Posts Home
Subscribe to: Posts (Atom)