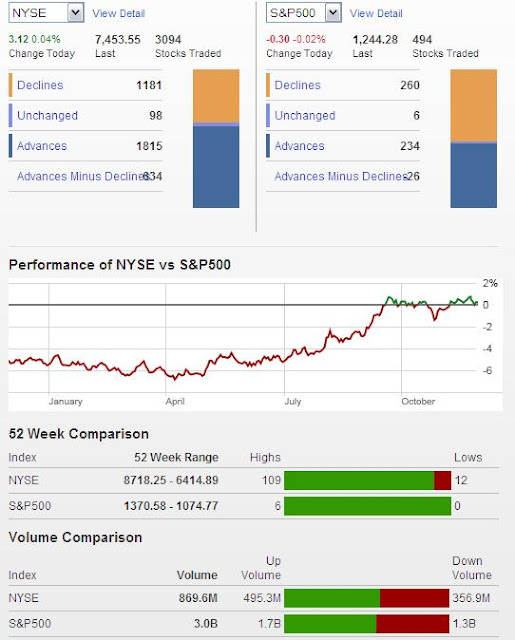 With the holiday season upon us for the next month, internals data will probably be skewed, confusing, and not as reliable as they are most of the year.  So I'm not going to depend on them as much, unless we see a huge spike in volume. 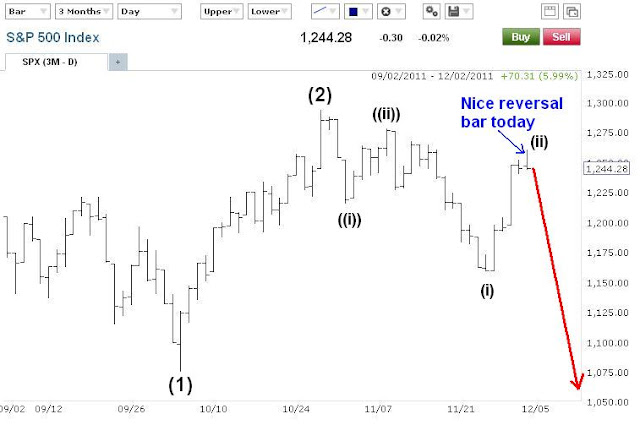 Overall there's not much to add to my last post other than today printed a nice reversal bar on the daily chart.  Since the central banks saved the world for the hundreth time earlier in the week, the market has been hard pressed to mount any follow through to the rally.  I suspect this is very discouraging to the bulls and will lead to a big selloff soon.  With volume so light and the holiday season here, I'm not sure how quickly it will be for the decline to materialize, i.e Monday?  Two weeks?  But regardless of the exact timing, financial media is boasting about this week's massive stock gains as if it's bullish, while the technicals suggest the action this week is actually bearish for the weeks ahead.  The market can certainly float higher in light holiday trading, but that's a guess, what's more certain and supported by technical evidence is that the market looks poised to decline hard soon.

Today's high seems like a good place to put a stop loss for aggressive bears.  For all others, above 1277.55 remains a very solid stop level. 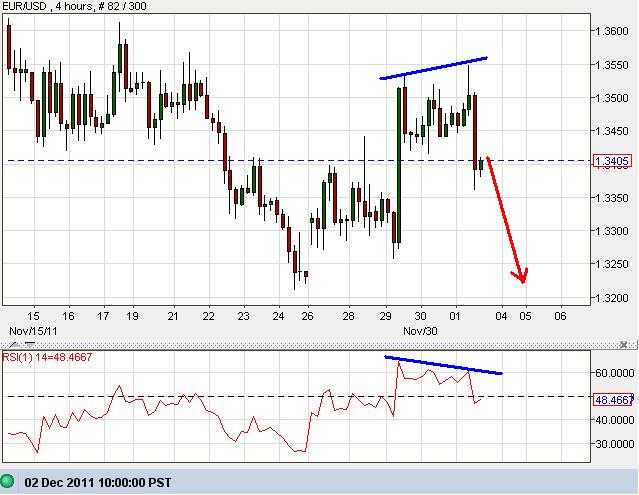 The euro appears to be in a lot of trouble here.  The gap from this past Sunday is still open, the RSI is diverging on the 4 hour chart, and today's selloff looks like a top is in.  I'm aggressively bearish the euro with a stop just above 1.3550 for my short term trades.

The Trend is Exhausted


PLEASE NOTE: THIS IS JUST AN ANALYSIS BLOG AND IN NO WAY GUARANTEES OR IMPLIES ANY PROFIT OR GAIN. THE DATA HERE IS MERELY AN EXPRESSED OPINION. TRADE AT YOUR OWN RISK.
8 comments:

Fading the Rally - Stocks and Euro 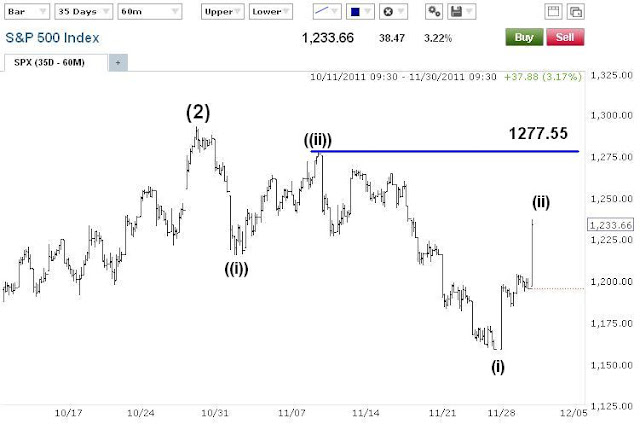 I was hoping the market would move as planned so I could go another day without posting something, but the market likes slapping me in the face every chance it gets, so here I am.  If today's rally were just out of the blue, or based on some change in overall sentiment, I'd be concerned about the wave count and longer term bearish outlook.  But the fact that it's due to some government bankers coming up with some nonsense plan to save the world for the 1000th time, I'm not concerned about the longer term bearish outlook at all.  This rally is temporary and I'm fading it (shorting it), but will probably wait until today's close, or sometime tomrorow.

The rally does create some problems for the short term wave count though.  Breaking above 1225 eliminates the wave count the way I previously had it.  And I feel the best way to count the decline now is how I have it above.  The problem is that wave (ii) is larger than wave ((ii)), and since wave (ii) is of a smaller degree then it should also be smaller than larger degree waves.  But it's not.  This structure does not violate any EWP rules, but it is a guideline and one that has served me well in the past to follow.  But the fact that the break of 1225 was due to human banker/government manipulation does make the above count more likely since we can't assume a nice fluid and natural EWP pattern is unfolding when unnatural influences and manipulation have now interfered.  So the fact that the waves are not unfolding perfectly in the face of the intervention today does give me a little more confidence in the above count, despite the guideline being violated.  1277.55 is my stop.  Breaking above that level won't turn me bullish, it just means I have to wait a little longer to short again. 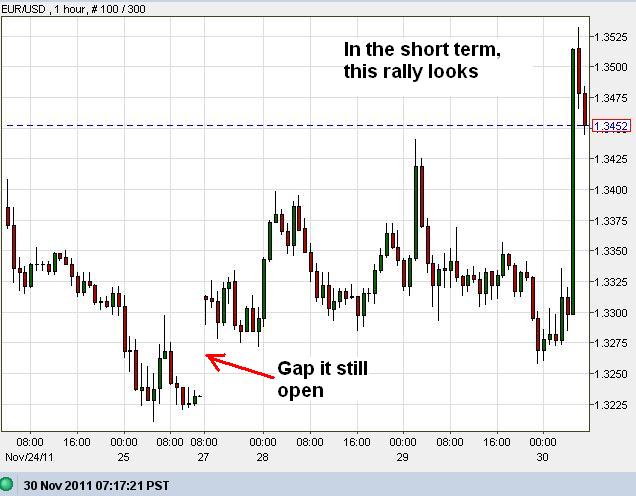 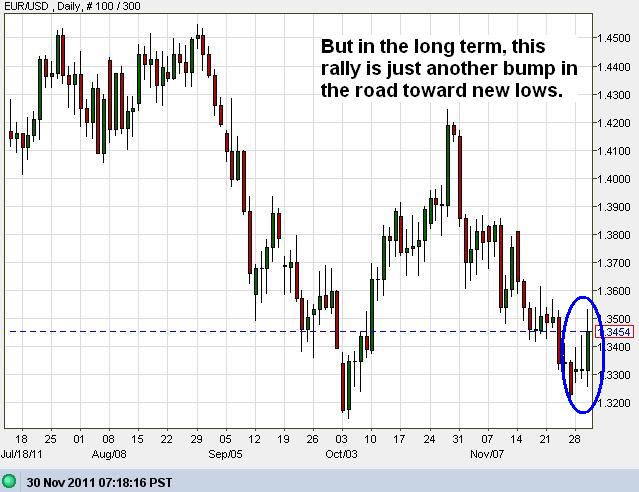 In the short term 1 hour chart the euro rally looks amazing and it looks as if we should try to get long any chance we get.  But looking at the daily chart you'll see that it looks more like just another bump in the road on the way toward lower levels.  The fact that this rally didn't occur right at a bottom, and that Sunday's gap is still left open, have me wanting to short this rally.  It should be fully reversed soon. 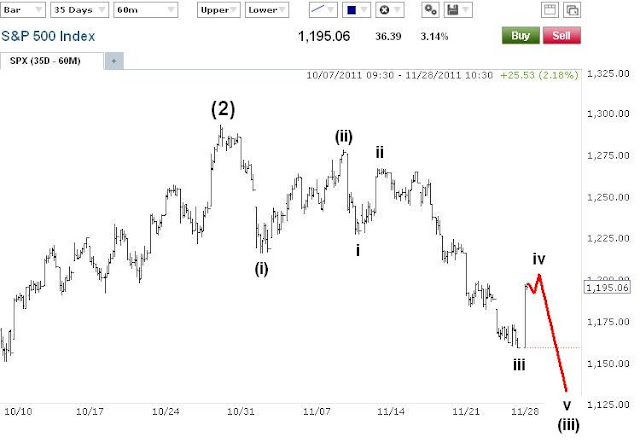 I had a nice week off with family and friends, gobbling up turkey all weekend and I hope you all did too.  And speaking of turkey, I feel like one now.....boy did I eat a lot.  I better hit the gym again to train for the next upcoming holiday season gorging I'll be doing in just a few more weeks.

Stocks declined last week despite the fact that it's usually a positive week for stocks historically.  Volume was light, of course, but just the fact that the market declined and couldn't hold a rally is a strong sign to me that there is a strong larger downtrend in place.  But after such a long and slow downtrend it has left the market in severely oversold territory, which has led to today's bounce.  Again the bounce appears to be tied to "hope" of better days in Europe.  And we wavers know this will not result in any sustained rally, so it merely presents a good shorting opportunity.  The count is posted above, the bottom of wave i is my stop level just above 1225. 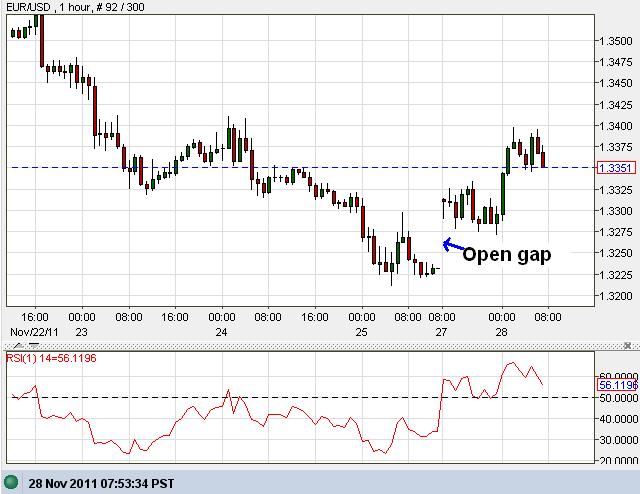 The euro popped hard at the open Sunday but has left a huge gap open as a result.  Gaps are usually filled, and there is no reason to doubt that the downtrend is still intact for the euro.  So I'd be shorting rallies, especially until that gap is filled.