Stocks and Euro Obeying My Commands 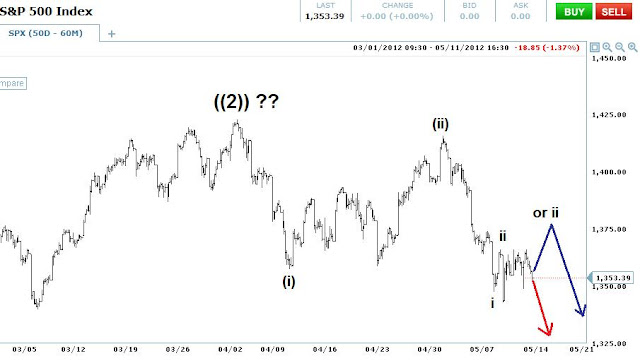 Stocks have followed the short term EWP forecast for a selloff after marking a wave (ii) top at 1415.32.  Keeping it simple, and focusing on the short term, I want a stop on my short position just above 1415.32.  If the wave count is correct, stocks will be undergoing a sharp and deep selloff soon.  Wave ii has either already ended, or will make a sharp rally to the 1380 area before quickly reversing and selling off hard.  Either way, 1415.32 should remain intact and rallies should be seen as opportunities to short.  Whether Primary ((2)) has topped is irrelavent to me.  The short term is bearish, so I'm bearish.  I'll deal with Primary degree waves later if market/economic action dictates I do so. 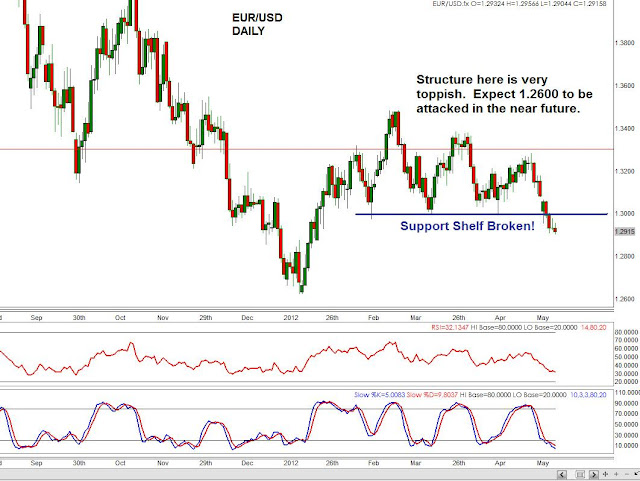 Boy, I'll tell ya, sometimes in trading I feel totally lost and other times I feel like a Jedi Knight.  Lately with the euro, I've been a Jedi Knight.  The euro has been following my forecast quite well and has been obeying my commands like a good little currency should.  The gap from Sunday night was almost completely filled, falling just 4 pips shy of my cited 1.3070 level, but still recovered sharply overnight nonetheless.  The support shelf of 1.3000 has been taken out solidly like I projected last week (Jedi), so this opens the door for 1.2600 to be assaulted next.  The daily candlestick structure March of this year is extremely toppish and has big time bearish implications for the foreseeable future.  The break down of 1.3000 is a very welcome event for the bears.  Now short term the euro is oversold so don't count out a sharp short term bounce.  But 1.3283 in the EUR/USD spot should remain intact.  I'm aggressively short against that level.  Now I will use my Jedi Knight skills on the EUR/USD......"you will decline toward 1.2600 swiftly.......(waving hand in front of EUR/USD chart).......you will decline toward 1.2600 swiftly.....(waving hand in front of EUR/USD chart)."  Consider it done!  :-)

The Manic-Depressive Stock Market: What to Make of It
The psychology of the market may be teetering on the edge...
-Elliott Wave International 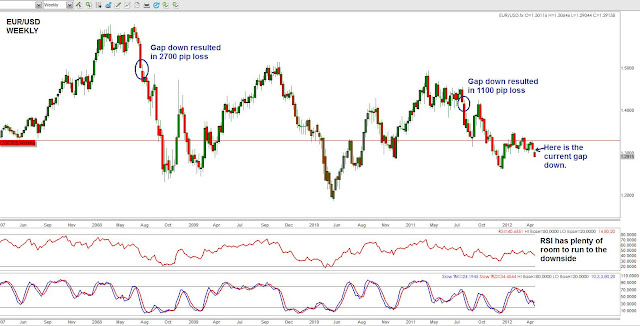 Let's take our analysis a bit further in the EUR/USD.  Here's a weekly chart which I rarely show since I'm more of a short term swing trading kind of guy.  But I just wanted to show you a subtle sign of major selling ahead.  There are 3 downside gaps on this chart, and both resulted in massive selloffs immediately after them.  One resulted in a 2700 pip selloff, and the other resulted in an 1100 pip selloff.  This week's gap down is similar to these two from the past.  If history repeats itself, it means major selling is ahead of the euro.  And with the short term picture poised for major selling and an assault of 1.2600, the weekly chart here also gives us a good indicator that 1.2600 is probably the euro's next stop.  It probably won't be a straight line, so manage risk accordingly and be prepared for wild swings.  Ultimately, as long as 1.3283 remains intact, then 1.2600 should be hit soon. 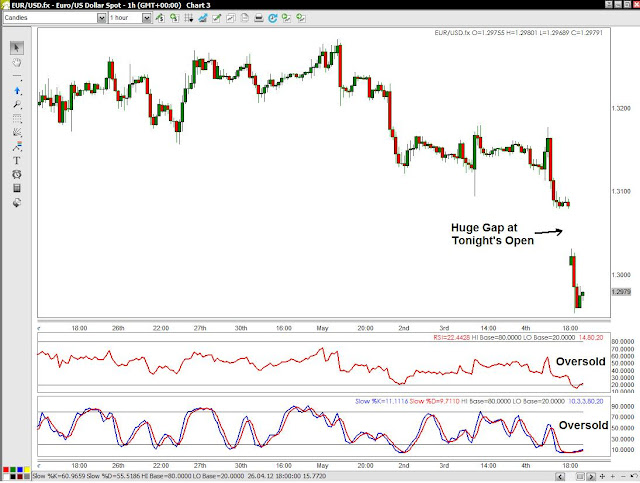 Friday I said that the EUR/USD would attack the 1.3000 and take it out soon, and it wasted little time launching its assault.  The EUR/USD gapped down big at the open today and broke solidly through 1.3000, and then had follow-through to the downside after that.  It is now trading near the low.  Gaps are usually filled so this is a great trading opportunity since I held short over the weekend and can take some profits and get back in short at a better price.  Also note on the hourly chart above that the momentum indicators like stochastics and the RSI are deeply oversold.  In preparation for the EUR/USD filling its gap, and relieving its oversold condition, I covered 25% of my short position.  I will re-enter that same short position if it rises to 1.3070, about 100 pips away from where it's currently trading.  If the euro is so bearish that it just continues lower without filling the gap, then oh well, I still have 75% of my position intact to profit from that decline and I reduced risk with a high probability trade.  That's the game, playing the probabilities and reducing risk.

To sum up: the EUR/USD gap will probably be filled soon, meaning a rally to 1.3070 is likely within a few days, if not a few hours.  So I took off 25% of my short position and will reshort that same amount when the gap fills around 1.3070.

Refer to my my previous post below for a little more context on this trade, as well as some stock market commments.  It's also worth noting that the euro is not tanking on its own, stock futures are down 17 points (S&P), so risk aversion is hitting the markets again.  Tomorrow morning will be interesting.