Gold rallied sharply today which is the exact opposite of what should occur if wave 3 at multiple degrees is unfolding. Gold should not go above $920 and should actually selloff sharply this week for this count to remain valid. My hard stop is at $950 but if I see another strong day tomorrow above $920 I'll most likely exit most or all my short gold position.
No comments: 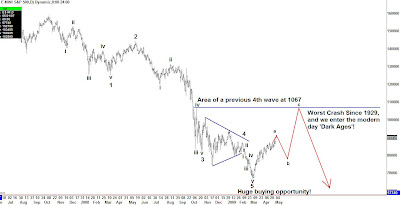 The above daily S&P futures chart project I laid out about a week ago is playing out. With my stops getting hit, the market is now racing higher and will probably continue to at least the 1000 level. The pace it's moving though is awfully fast though and it's hard for me to believe the market will shoot to 1000 in a week or so and then collapse in a monstrous wave 3 or C down. But it's possible. The larger trend is down and the S&P 2009 cash low at 666 will be broken significantly.

With all this in mind, as I've said in previous posts, I'm no longer going to fight this uptrend and play for a short term decline. I'm now solely focused on the big wave 3 or C down that will bring the Dark Ages back to the world in 2009-2011. So I have about a 20% full SDS (double short S&P ETF) with a covered May call against it. I will continue to add to that SDS position as the market rallies and roll over my covered option positions until I confirm wave 3 or C down is underway. So my stance is to take a "buy-and-hold" short position on the S&P until the big collapse occurs which should happen anytime within the next 5 months.
No comments:
Newer Posts Older Posts Home
Subscribe to: Posts (Atom)