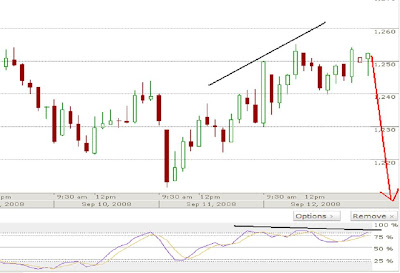 The technicals are setup for a huge selloff to commence early this week. All major indices are showing a bearish divergence on the MACD, RSI and stochastics (see 30min S&P chart above). The rally late last week was very choppy, overlapping waves, hard faught, and momentum was falling during the whole time. This tells us it's only a correction, and new lows will be acheived. Plus, regardless of the gains the market made, the VIX rose steadily. The VIX usually drops when the market rises, but this time it rose, which shows the amount of fear in the market despite the rallying. This all suggests a big fall coming, and it lines up perfectly for a handful of wave 3's at various degrees that the current wave count suggests. So perhaps all next week will be triple digit losses every day!

The big news over the weekend is what will happen to Lehman Bros. I can't imagine the government letting them fail and get liquidated, however the wave structure of the market and the underlying technicals point towards that being the case. Regardless of the fate of Lehman, the evidence strongly points to heavy selling this upcoming week.

Hang on to your shorts this week, it should be very messy. I remain heavily short all three major indices (Nasdaq 100, Dow and S&P 500).
1 comment:
Newer Posts Older Posts Home
Subscribe to: Posts (Atom)