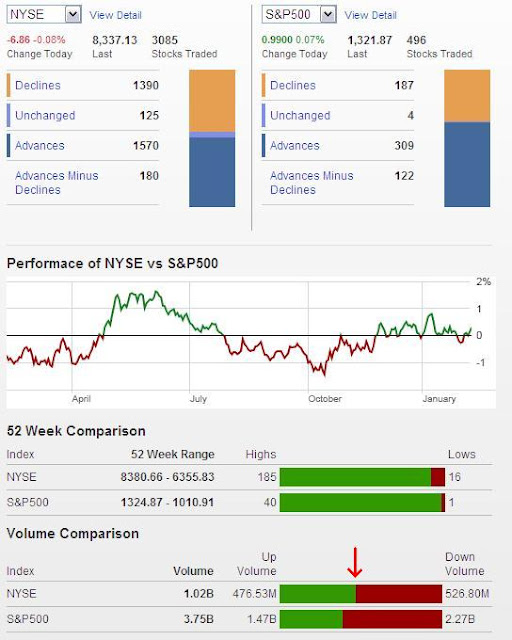 Internals today match the price action in that it they were slightly bearish.  Volume kicked up a bit today but still light at just over 1 billion shares on the NYSE.  The internals and price action suggest the weakness this week is just a correction, but if it is a correction then I think it's likely a very small fourth wave that one slight quick pop higher to a new high should mark a top. 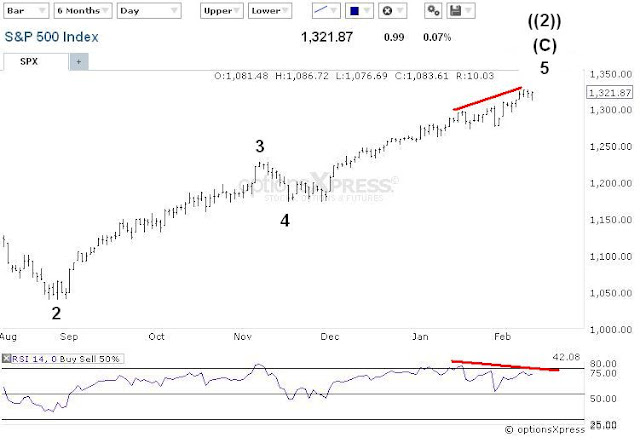 The wave count and momentum (RSI) suggest the rally is in its final stages.  But what's new, right?  I've been saying that for a week or so and the market just floats higher.  That's why I wait for confirmation or solid evidence a top is in instead of just trying to "guess" when a top is in right in the middle of uptrend.  Without any evidence of a top, I have to expect higher levels to come. 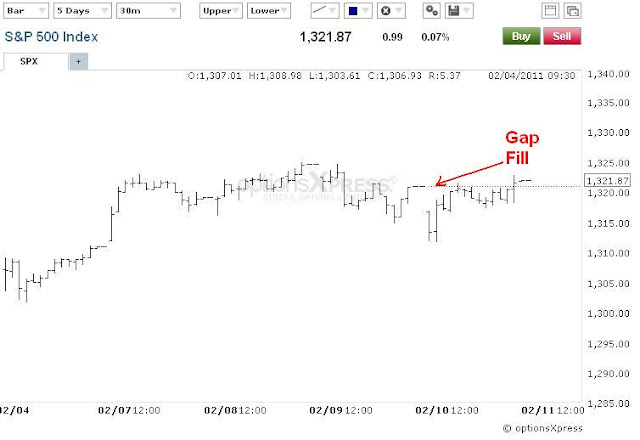 Despite the lack of an impulsive decline or convincingly bearish internals, the chart above shows how today's action might end up being quite bearish since the late day rally was able to close the gap at the open this morning.  Continuation to the downside tomorrow morning would be very much welcomed by the bears and suggest that a top may be in.  On the other hand, if the market makes a new high instead, I still believe that high will be very short lived and reversed.  Either way I feel the bears should have the fingers (paws) on the trigger ready to get short.  But as always, patience is key.  I want the market to come to me and play into my rules, not the other way around. 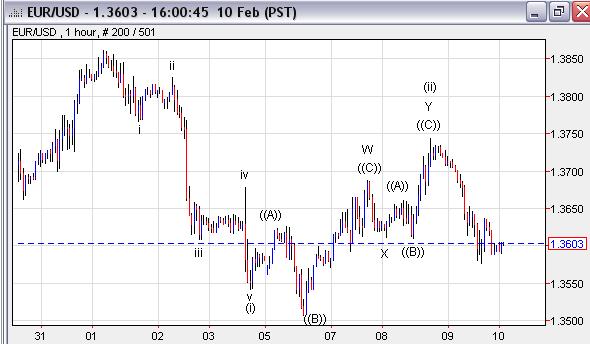 The euro count I posted yesterday looks good after today's downside action.  If the count is correct, there should brief, short rallies and selloffs should be big and strong.  I am firmly bearish the euro at this point, and bullish the US dollar.

PLEASE NOTE: THIS IS JUST AN ANALYSIS BLOG AND IN NO WAY GUARANTEES OR IMPLIES ANY PROFIT OR GAIN. THE DATA HERE IS MERELY AN EXPRESSED OPINION. TRADE AT YOUR OWN RISK.
1 comment: 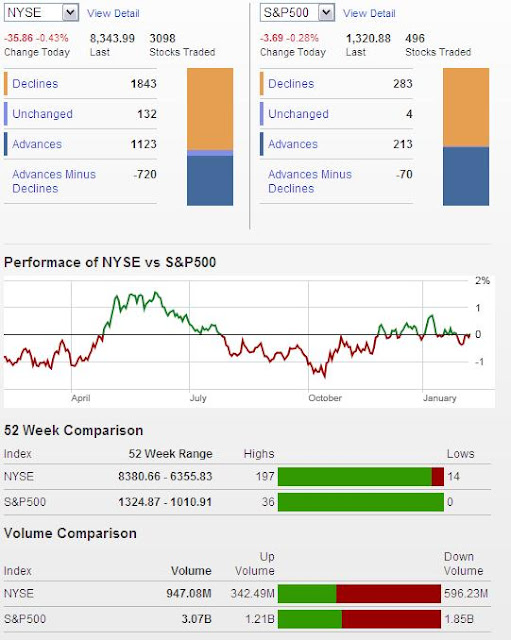 We got a little more volatility and volume in the market today, however I should underline little since that's the best way to describe the increase.  Today the NYSE hit 947 million shares, which is more than the past two days but still very light volume.  Declining volume was slanted modestly in the bears' favor and there were 721 more decliners than advancers on the NYSE.  The S&P internals show an almost flat index with the bears having a slight edge.  After such a long uptrend that looks severely exhausted in price action, wave structure, momentum indicators, volume and other internals, I am expecting more of a "wow" event for a top to be in place that what occurred today.  Today feels like a small correction of the uptrend and the Dow's structure looks almost certain of that.  Until we get a big gap down or breaking of the uptrend technically, we have to expect higher levels.

Addendum (6pm EST): Cisco reported worse than expected profit margins and the stock is getting punished by over 8.5% in the afterhours session right now (http://data.cnbc.com/quotes/csco).  Cisco often acts a good bellwether for the overall stock market's upcoming quarter, and their CEO, John Chambers, often tells it like it is.  If this holds true, the stock market has a good chance of selling off tomorrow starting the long awaited 100+ point S&P decline over the next few weeks/months.  Watch Cisco afterhours, the stock market should follow its lead. 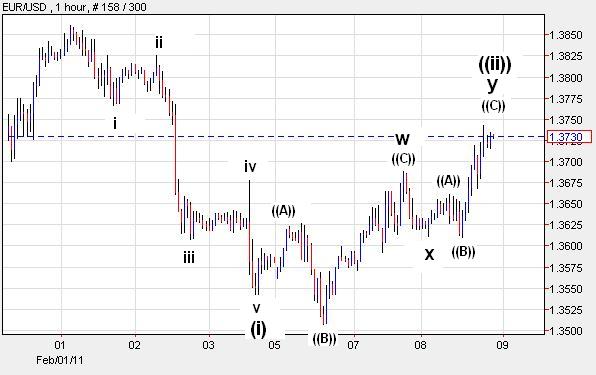 The euro count appears to show a rally in its final stages.  I'm unsure of the medium term wave count at this point but I'm an overall long term euro bear so the impulsive decline from early this month has me liking the short side here for this pair.  It looks like a double zig-zag correction has unfolded and nearing an end with a couple of small flat corrections in the mix.  If correct, the euro should fall hard soon.  Stocks should follow.  1.3861 is the key level for the bears that must hold.  Today's rally makes the risk/reward here even more enticing on the short side.

Yesterday I said, “I would not be surprised if Tuesday brings us a selloff…” As a result, today the market did this:

Yep, the market went straight to the moon and didn’t look back. However, immediately after saying that I said this, “… with no evidence suggesting a top is in there is nothing I will do for now.” In other words, I thought the market would selloff today, but with no signs of a top I’m not going to put my money where my mouth is. So in that respect, I can save some face here. Until the market shows us it’s likely a top is in, I have no intentions in trying to predict the future and call a top while the uptrend still remains well intact. So I’m still standing aside, waiting for an opportunity to short when I see one. That opportunity will arise when I see a big reversal day on solid volume, a gap down day that’s sustained throughout the day, and/or a close below the trendline I’m following (see below). 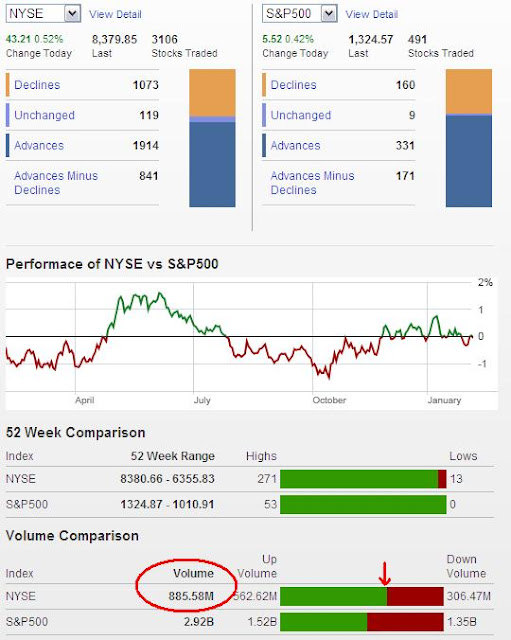 Internals today were fairly strong, although not dominant on the bullish side. Up vs down volume was only slightly in the bulls’ favor and there were 841 more advancers than decliners on the NYSE. So a bullish day, but nothing jaw dropping. What is of note in the data here is the low volume again. So that’s back-to-back days of very low volume on big up days, with today coming in about the same as yesterday staying well under 900 million shares. So price continues to go up, but enthusiasm and momentum are waning. That doesn’t mean the market will top right now, it just means that once we see signs of a reversal, I feel the risk/reward advantage lies in the bears’ hands (paws) and shorting should be the preference. 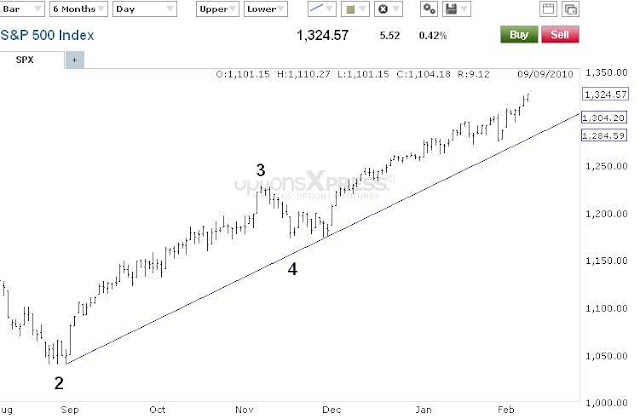 The S&P has a trendline in place on the daily chart that I want to see broken soon. A close below it would be a good sign that the uptrend might be broken. But a close below 1275 would give us a convincing new low and provide even more evidence of a top. I know that level is far away, but depending on risk tolerance and trading style, I also wanted to note the trendline where more aggressive traders might find it as a more viable level to watch. I’m waiting for a big reversal day, or perhaps a big gap down day to get my attention prior to the levels I mentioned above. But until then, I’m waiting patiently on the sidelines. 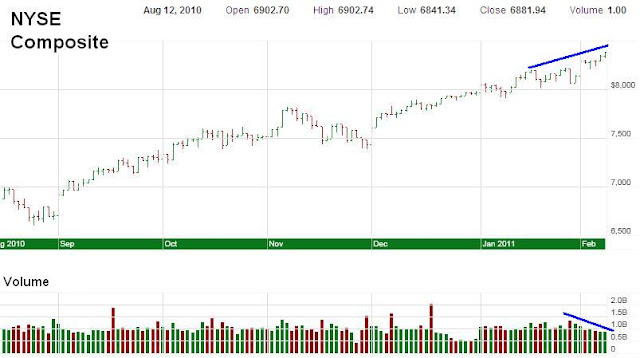 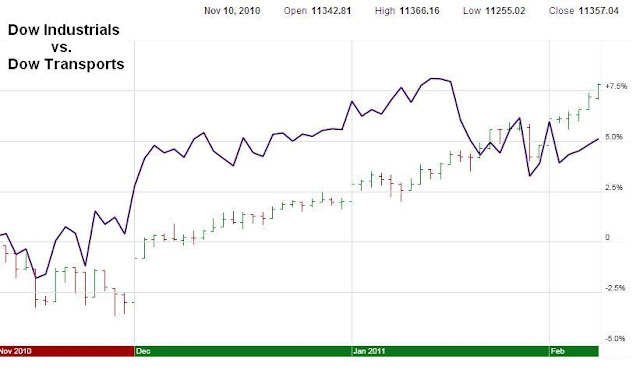 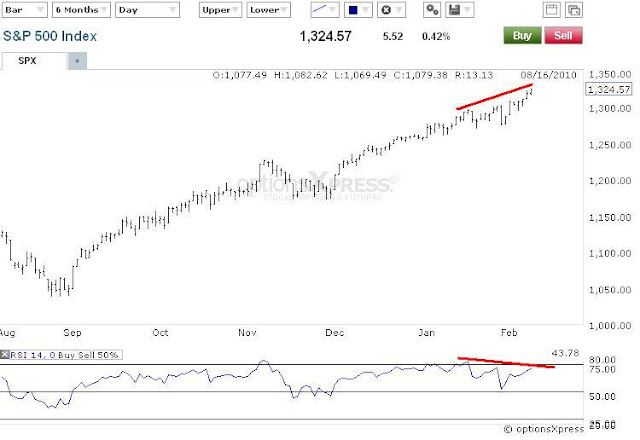 As you can see from the above charts, momentum has already been bleeding from the rally lately. The NYSE composite chart shows how volume has tailed off the past few days. And as Elliott Wave International has been pointing out the past week or so, the Dow Industrials and Dow Transports are diverging right now as the Transports have failed to confirm the recent Industrials’ high. So Dow Theorists are taking note and some self-fulfilling prophecy, if anything, could lead to a selloff just on that setup alone that could help fuel a larger selloff. Lastly, you can see that the RSI is still failing to confirm the new highs in price on the S&P as well.

So the market’s structure looks weak and ready to fall at any moment. But until we get signs of a reversal, I’m not touching this market.

On the Docket: The Case Against Diversification 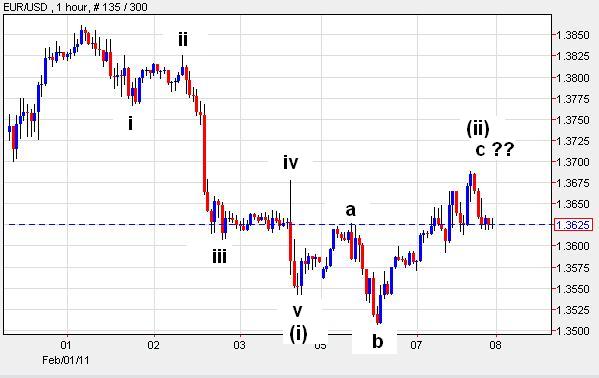 Lastly, the euro declined in a nice impulsive 5 wave this month telling us that the trend has returned to down for the short term at least. Most likely a flat correction is finishing up with wave c in its final stages. If the count is correct, a sharp selloff should occur soon, and most likely it will coincide with a decline in stocks since they too are setup to fall off a cliff at any moment. Shorting the euro now looks like a good risk/reward trade with a stop just above 1.3861. But if that’s too much risk, a short with a stop just above today’s high could be established if we get a new low on the hourly chart.

Bulls Roar, but Volume Extremely Light, Bears Have a Chance to Strike 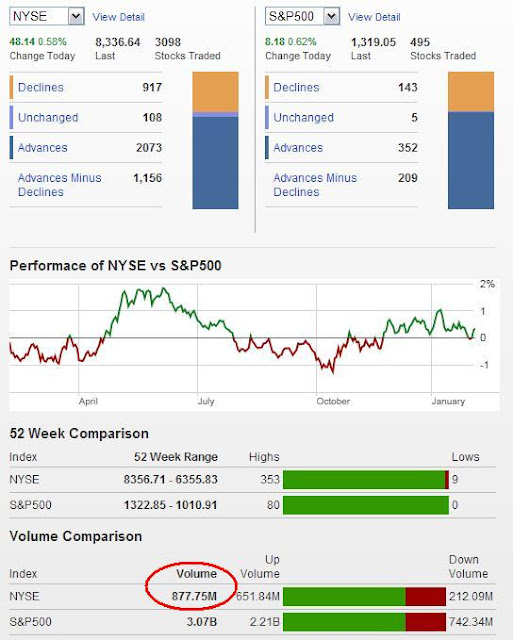 Internals were very bullish today, however volume was extremely light as only 877 million shares were traded on the NYSE.  It's either a hangover on Wall Street after Superbowl parties last night, or the air as really come out of this rally.  I would not be surprised if Tuesday brings us a selloff, but with no evidence suggesting a top is in there is nothing I will do for now.  But today felt like an exhaustion burst higher, and those usually end with sharper moves to the downside soon after.  I'll be watching closely for a shorting opportunity Tuesday.

Nothing new really on the euro since it hasn't moved much overall.  You can count five waves down complete so a larger corrective rally MAY be underway now.  But the larger trend appears to be down for now so I'd be looking for shorting opportunities.