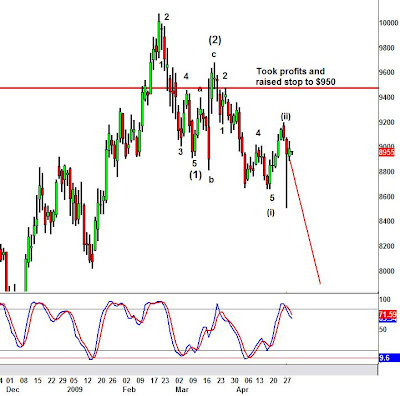 Gold should be undergoing a wave 3 at multiple degrees so it should sell off hard and fast. If my wave count is correct, it needs to fall hard very soon. I remain short
2 comments:

EUR/USD Looks Like Great Risk/Reward on the Short Side; April 29, 2009 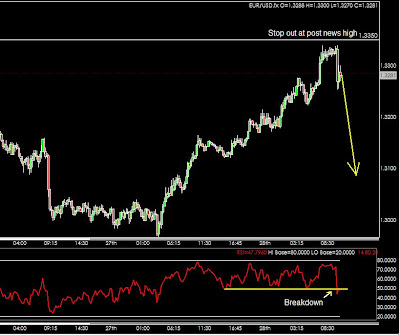 The EUR/USD rallied hard recently but after the Fed announcement we see a reversal of possible big proportions forming on the 15min chart. You can see the RSI at the bottom formed a support shelf during the recent rally but after the decline following the Fed news it has since broken down below that shelf, and so far is staying there, indicating that this currency pair is breaking down and may to a huge "after-news-reversal".

S&P broke above the control point used to see if a short term decline would occur. Again I was fooled. The key I want to remember is the longer term wave count which strongly tells me this rally is a fool's rally, a bear market rally and new lows on the year will be achieved. For that reason, I am taking a conservative short position and adding to it as the market rallies. I have a covered call position on the SDS and added a small amount to it today. The S&P is free to run up to the 950-1000 if it wants to. But again, it's a fool's rally and I will not be a buyer. This market still must undergo its worst and most devastating decline since 1929 and will do so later in the year.

Please view the long term S&P daily wave count on the right of my blog to keep perspective on the bigger picture.
1 comment:

Gold fell as expected to keep the wave count alive and the S&P did nothing. I am still bearish with a very small position with a stop at 876 cash S&P.
No comments: 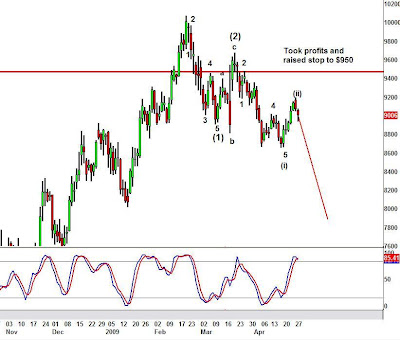 Gold appears to have topped at the area of the previous wave 1 extreme at the 918 area. It should now decline in a wave (iii) of (3), so selling should be very fast and ferocious. A reluctance to selloff massively in the next couple days will call this current short term count into question.

I remain short with a stop at $950
No comments: 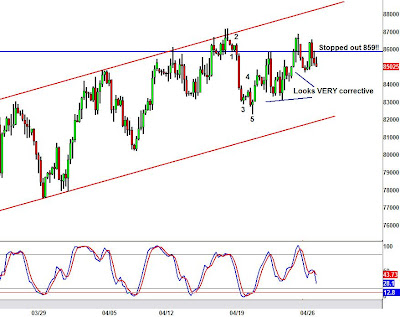 The market was strange today as all day NYSE breadth was negative and most of the major indices followed suit. In addition, the risk currency trade fell hard today as both the USD/JPY and EUR/USD declined big last night into today. The fact that 876 S&P futures was not exceeded, the rally from last week looks very corrective, and was done so with all these weakening risk indicators, tells me a top may be in.

I have been fighting this uptrend for weeks and will not get aggressively short. I do have a covered call short S&P position by using SDS which double shorts the market. Outside of that I'll watch the decline and wait for a bottom to get long again, or perhaps jump on the decline as a momentum short term trade. The target for the decline is the 780 area.

A decline is needed before this market goes higher and is worth the risk of getting long. I'm just not going to take anymore big positions on the short side until things clear up.

If I just couldn't resist the urge to short this market now, I would do so with a stop at the 873 S&P futures level, which is the beginning of the 5 wave decline I lable in my attached 4hr chart. As long as that level holds, I do see a lot of bearish potential in the short term.
2 comments:

Please feel free to comment on the blog and make any suggestions that would improve the analysis/trading I explain. Also, if there are any currencies or securities you'd like me to comment on please let me know. 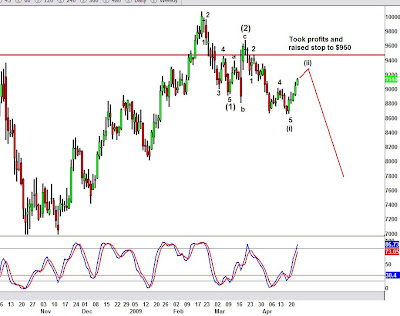 Gold continues to rally but is still well beneath my new stop loss area of $950. My confidence in the prior posted wave count is very low so I restructured it a little bit. My confidence in this new count is higher, but I am focusing more on basic trend analysis and the fact that gold has broken down from the ascending daily trendline and has broken it's streak of higher highs and higher lows. As long as gold remains in a downtrend status, I am short the metal.

I still feel the metal is bearish as long as it stays beneath the last swing high of $970. But a break of $950 will almost assure us that a new short term uptrend is taking place and so $970 will soon be taken out anyway. So my stop loss remains $950 knowing that I took profits on part of my short position to compensate for extending my stop loss earlier.

In the short term, it appears a series of wave 1s and 2s are unfolding. Of course, with EWP, when your wave count has a series of 1s and 2s unfolding, it lessens the reliability of the wave count. But until the wave count is officially negated, it will stand as is and I'll trade accordingly. Right now we're in a wave (ii) rally which would explain the sharpness of the recent rally. But once this wave (ii) tops and reverses, a wave (iii) of 3 of (3) will unfold which should result in a massive selloff in the metal. As long as it trades beneath $950 then this outlook remains solid in my view.
No comments: 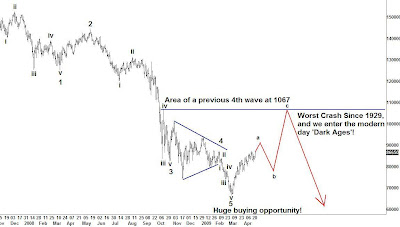 With the short term trade not working out, let's look at what's happening in the bigger picture. Above is a daily S&P futures chart showing a nice 5 wave decline from the October 2007 high. With 5 waves down it tells me the largest trend is down now, and that the lows put in earlier this year WILL NOT HOLD. But after declining so massively over a 17 month period, a correction is due. We are in that correction now, which is one reason why it's so hard to trade it. Clearly the rally from the March low is not impulsive (5 waves), so it's some type of correction, which fits with my wave count on the chart above and the thesis that the March lows will not hold.

So what do I do now? That's the big question. I tried fighting the current trend, which is up for the moment, and shorted this market for weeks. It didn't work. So I want to focus on the largest trend which is down. I decided to establish an SDS (ETF double short the S&P 500) position and sell calls against it real in some premium and give me a little cushion. Plus, it's a longer term trade so if I hold it at the end of the quarters I'll recieve a dividend on it. I know there is slippage in these ETFs, but that's fine, I'm not holding it for a decade. I entered a 25% position of the total position I want to have to get fully short the market in preparation for the next collapse in prices that will break the March lows and send us into the modern day Dark Ages. As the market rallies, I'll add to my SDS position, and as time passes, I will continue to sell call options against he position and collect dividends which will improve my positioning. I'm doing this because for the short term the trend is up, but for the longer term the trend is down. I tried timing the market and it didn't work. So instead, I'm going to short and hold with an easily sustainable and comfortable short position to where I can just patiently wait for this market to roll over again. I estimate this won't happen until the latter end of this year though.

One more strategy I put in is to buy an option butterfly on the S&P just above current levels. This also gives me some protection with my current short position in case the market continues to rise slowly or move sideways.

So there you have it. My new stance is to focus on the long term and position myself slowly with the largest trend, which is down, and PATIENTLY wait for the market to finish this bear market 'fools rally'.

I welcome any questions anyone has. Also, the part about the Dark Ages and the next very massive and destructive decline is inspired by the work of Elliott Wave International and Bob Precther. Please take the time to go to their website and read their material. They have a lot of free stuff and good EWP educational tools. Bob's book "Conquer the Crash" is excellent reading for anyone who wants to know how to protect themselves on this huge decline that's coming later in the year. EWI's website is: http://www.elliottwave.com/
3 comments:

Well knowing the larger trend was up I took a very aggressive approach and tried to fight that trend and short the market using options so my risk was small and well defined. It has not worked out. I was stopped out of the trade Friday as the market continues to rally. I don't want to fight this market anymore so I'm going to either wait for a pullback to get long, or look to short if this market continues higher for the next few months.

My focus will now turn to the longer term picture and doing covered calls, collecting ETF dividends, and waiting patiently for the next chance to strike.
No comments:
Newer Posts Older Posts Home
Subscribe to: Posts (Atom)