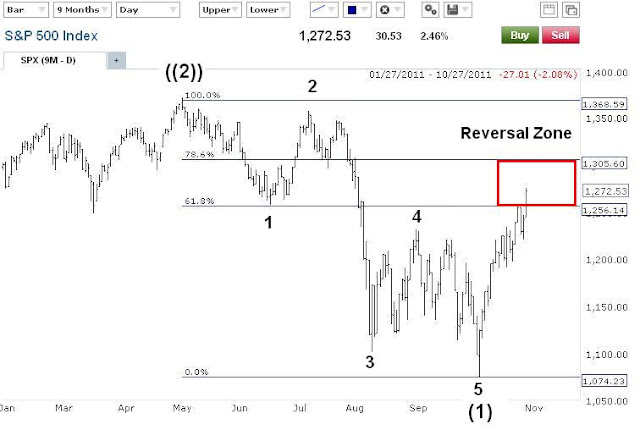 Tuesday I thought a top in stocks might be in, but was unsure.  Then the big euro reversal yesterday made me think a reversal in both the euro and stocks was at hand.  Well, you know the result of that thinking.  If the top I'm looking for is in fact Intermediate wave (2) of Primary wave (3), then it will be a doozy when Intermediate (3) gets underway to the downside, and a big money maker for the sage bears.  However, I can almost guarantee you that catching this monster top will not be easy.  And that was proven to me yesterday.

But being wrong in the short term does not make me wrong in the longer term.  With the high on the year still intact, stocks are right in the typical topping area for 2nd waves right now, and the fact that this rally is based on some bailout nonsense in Europe, I feel this is simply just another time for me to nibble on the short side some more.  I'll get more aggressively short on a nice reversal day, or simply a sharp decline on very bearish internals.  But I have little doubt this market will not make it easy on me.  I just have to put my emotions in a box, lock them up, and keep them under the bed for now so I don't do anything stupid. 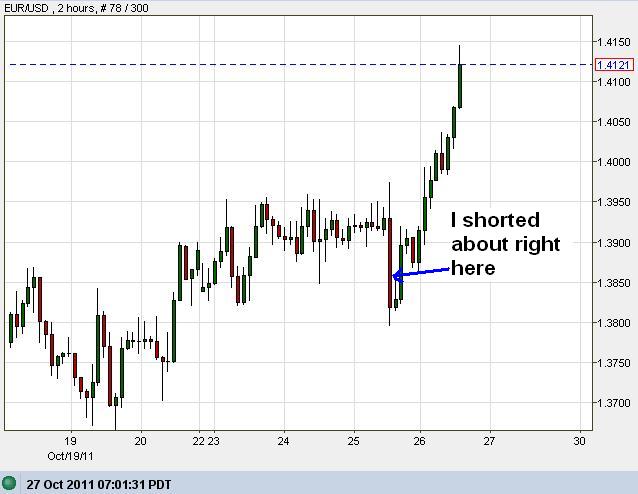 Looking at the euro chart I posted yesterday it still looks great for a top and reversal and has me salivating to get short.  Then when I look at the above chart from this morning, I think I'm an idiot for wanting to get short.  But that's the market.  Right around major reversals in likes to suck you in and then slap you, making you feel stupid in front of your friends.  And this slap hurt, I tried twice to short this pair yesterday and got stopped out twice.  I'm waiting now for another reversal sign and will try again.  I'm not giving up simply because I was wrong yesterday.  Being wrong is part of trading.  It will happen, and happen often.  The key is to adhere to the bottom line we all have, which is to make money trading.  Well, that's what I plan to do.....make money shorting the euro.  Yesterday's decline looks like a 4th wave and the 5 wave rise into this morning looks like a 5th wave at some degree.  I'm not sure if it will subdivide further into 4th and 5th waves so I'm going to wait for now.  The top in the euro should align with stocks more or less.


PLEASE NOTE: THIS IS JUST AN ANALYSIS BLOG AND IN NO WAY GUARANTEES OR IMPLIES ANY PROFIT OR GAIN. THE DATA HERE IS MERELY AN EXPRESSED OPINION. TRADE AT YOUR OWN RISK.
12 comments: 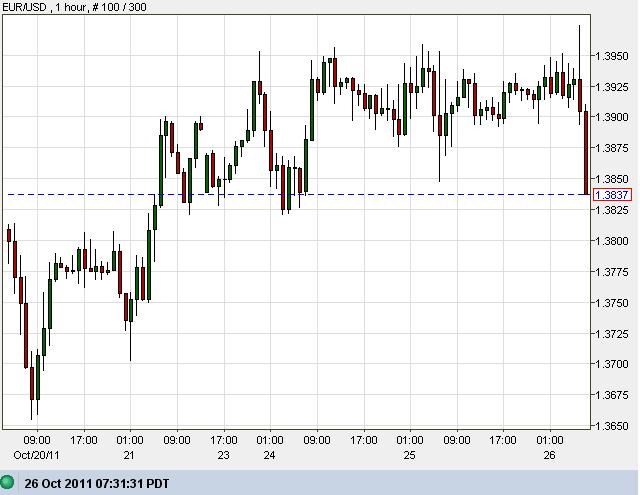 Yesterday I said I suspected the euro might charge quickly toward 1.4000 before topping and sharply reversing.  That's exactly what happened.  Although I got stopped out on the sharp new high, reshorted a few minutes ago because this looks like a top was put in.  If so, stocks might follow soon.

Stocks Decline at Bottom of my Reversal Zone.....Top in Place? 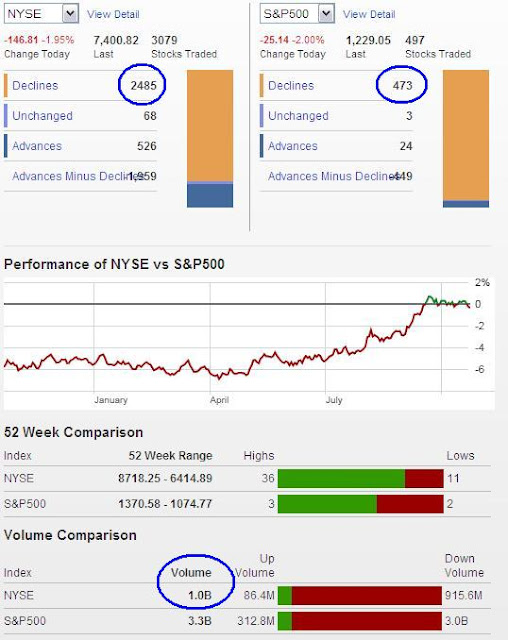 Internals today were very bearish in that declining stocks far outweighed advancing stocks on the NYSE and S&P.  And although volume increase slightly today overall, it was still quite light today coming in at just under 1 billlion shares NYSE.  Not sure this supports the case of a top being in right now, but volume doesn't have to enter right at the top, it can come in during the following days, and there is certainly evidence in place now that suggests Intermediate wave (2) might be over. 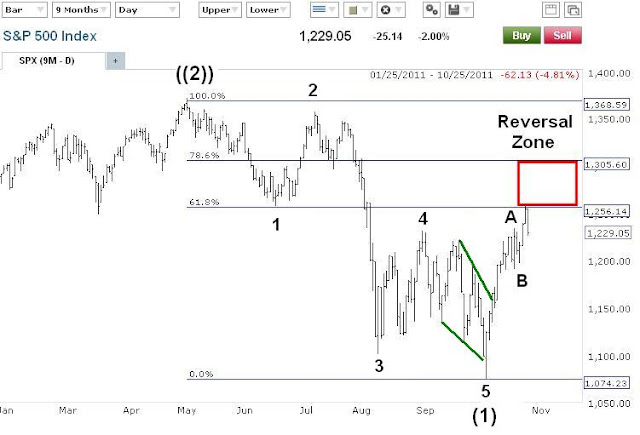 Stocks reversed at a very interesting level at the 61.8% fibonacci near 1257.  I've been citing this as the bottom level of my reversal zone the past couple weeks since the 61% and 78% fibonacci retracement levels are often the stopping points for 2nd waves, it's above the prior 4th wave, and the end of Minor wave 1 down June 16, 2011 is at 1257.  All represent good resistance levels that should give Intermediate wave (2) some trouble.

I would have liked to see higher volume with a rally and reversal to be more certain that a top is in right now, but the evidence would seem to at least warrant me to start getting short here.  I will add to my short position on further rallying and /or an acceleration of the downtrend with strong volume and very bearish internals. 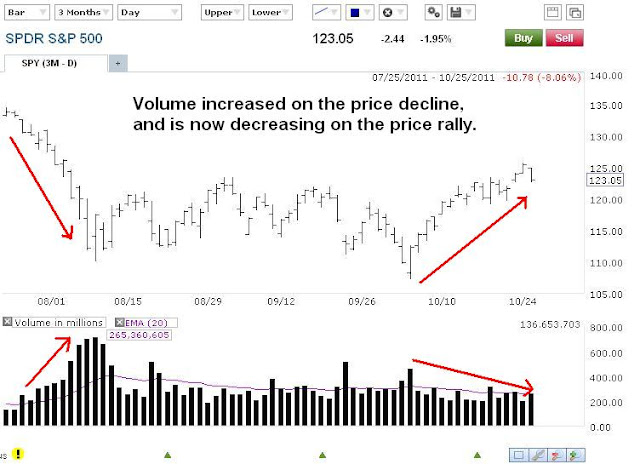 I like to look at the SPY (S&P SPDR) as a proxy for overall stock market volume sometimes.  You can see that the big sharp decline we had this past July/August had increasing volume accompany it, while the recent Intermediate wave (2) rally has had mildly decreasing volume.  This is bearish.  You can even see the 20 day moving average trailing slightly down now while price moves higher.  This is a good sign that we're on the right track in counting this current rally as a correction, and NOT a resumption of the previous uptrend.

There is plenty of other evidence to support this, but I don't see a reason to put a laundry list of things on here.  The bottom line is that as long as this year's high remains intact, I see substantial risk to stocks, and that once Intermediate wave (2) ends, the decline should be deep and sharp providing substantial profit potential for those on the short side. 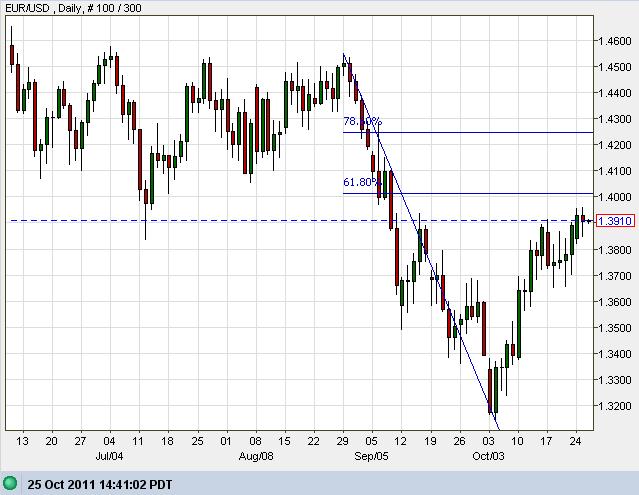 The euro has reached a level I'm comfortable putting on a very small short position to start easing into a larger short position for the longer term.  Today's weakness may even be enough for some aggressive traders to get short with a stop just above the overnight high.  With a nice round number of 1.4000 at the 61.8% fibonacci retracement level in arms reach, it's hard to think that at least on sharp, and possibly quick, attempt to reach 1.4000 won't be made by the euro.  But no matter what my play is on how to approach the short side, I want to make sure I'm in the market when this pair finally decides to turn sharply lower on what I believe will be a move towards parity with the US dollar.  If a sharp move to 1.4000 occurs overnight and stops me out, I wouldn't be surprised if a sharp reversal takes place shortly after, prompting me to jump back in on the short side.