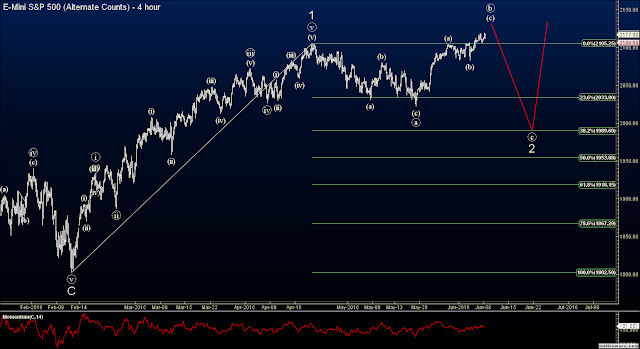 The market has been meandering around sideways to up for the past few weeks which are indicative of a tiring trend.  It has carried on much further than I anticipated, so I had to rework my wave count.  The summer apathy has hit Wall Street in full force as the market seems to move without conviction, although it makes progress higher and higher.  That is not good for the bears, and the bulls can easily float this market higher and higher as it has done so many times in the past under these conditions.  In reworking the wave count, EWP's guideline for the "right look" still has a Minor wave 1 rally complete, and the past several weeks have been part of an ABC "flat correction".  The major issue with this outlook is that wave ((b)) looks like a 5 wave rally more than a 3 wave move, which gives me some hesitation here.  On the flipside, calling that same wave an impulsive wave ((i)) also has it's problems since it would be part of a Minor wave 3, which means it should be a sharp and strong melt-up kind of move, and I'm just not seeing that.  For now, I'm still counting this as a flat correction with wave ((b)) ending soon.


PLEASE NOTE: THIS IS AN ELLIOTT WAVE BLOG EXPRESSING AN OPINION AND IN NO WAY GUARANTEES OR IMPLIES ANY PROFIT OR GAIN. TRADE AT YOUR OWN RISK.
No comments:
Newer Posts Older Posts Home
Subscribe to: Posts (Atom)