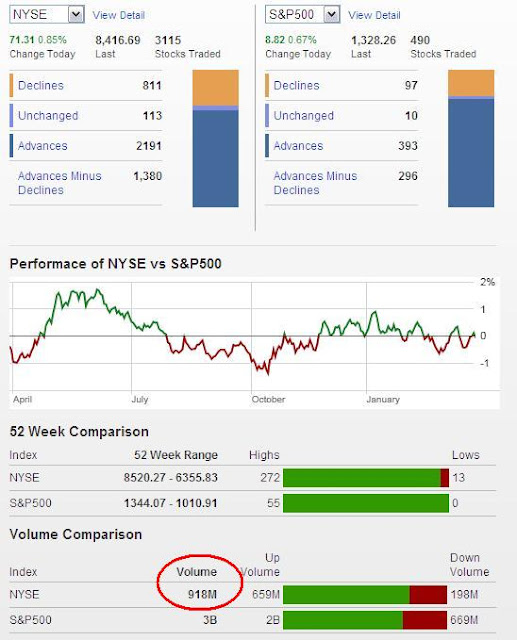 The internals today show the same picture we’ve been seeing the past week or so in that volume has been very light on this current rally leg. Today we had an uptick in volume relative to the previous trading days, but still light overall at 918 million NYSE shares. I don’t think the uptick today means much, other than typical midweek trading kicking up the volume bars a bit. Getting above 1.15 billion shares will get my attention though. 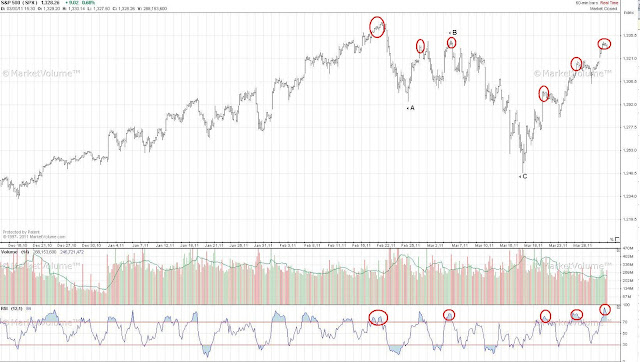 Unfortunately for the bears, the rally is starting to look quite impulsive. It’s quite a smooth and clean looking rally that has now gone quite deep. I still count the decline from late February as a 3 wave ABC move. An X wave, which is how I am counting this current rally, should be a bit choppier and composed of a 3 wave ABC move itself. But right now I’m not seeing it. Regardless, with very light volume throughout this rally, and the RSI in a position now that it has been at in the past when a decline was near, I’m on the lookout for a good short term shorting opportunity coming very soon. I’d like to see an up day that is reversed during the trading day with solid volume to support it. I’d get short with a stop just above the high on the day if that occurs. Other than that, an impulsive decline on high volume at any time would also get me on the short side. Until I get that, I’m waiting on the sidelines. 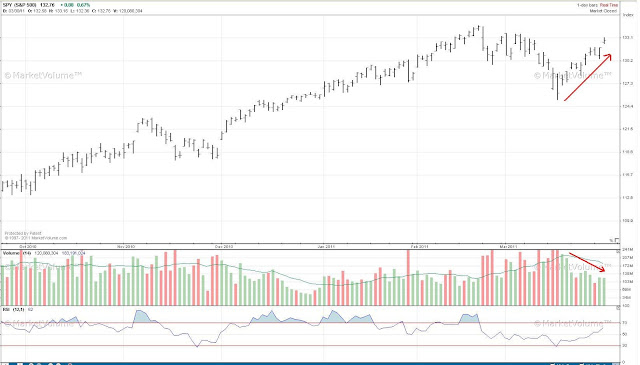 This chart of the S&P SPDR (SPY) shows what I’m talking about when I mention volume is declining as the market rallies. This is typically a bearish development, but it can continue doing this for quite a while. So I want to wait for signs of a top and reversal before attempting to short. 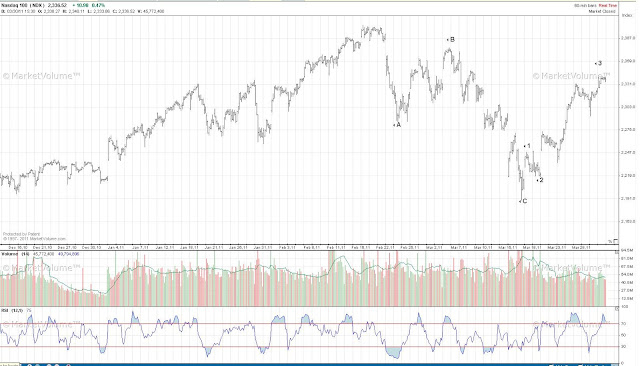 Lastly, the Nasdaq 100 has a rally that looks the most like a nice developing 5 wave impulsive rally. If correct, the overall stock market probably has already bottomed and the bull trend has resumed. This conflicts with the evidence I’ve listed above on the S&P though, so we’ll have to wait and see which side prevails here. So watching volume in the overall market, and the wave structure in the S&P and especially the NDX, seems like a good idea to help us establish a high confidence low risk trade in the near future. 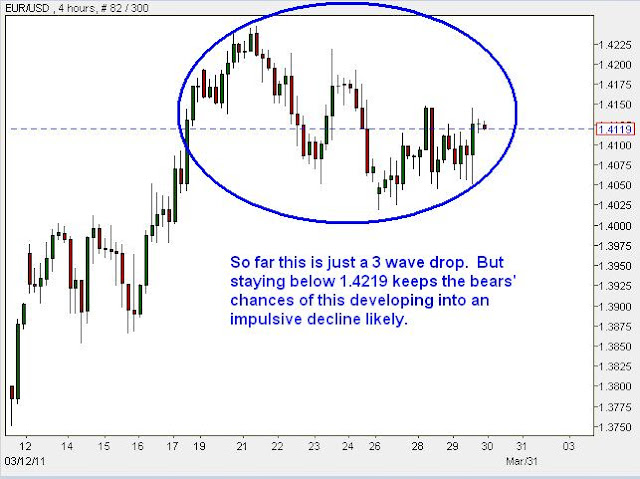 The euro is flip-flopping around directionless this week and so the wait continues. So far there is only a 3 wave decline from the high which suggests it’s only a correction. But a 3 wave decline can easily develop into a 5 wave move as long as no rules are broken. So staying below 1.4219 would keep the possibility open for a 5 wave decline to develop from here. Breaking above 1.4219 would mean new highs were on the way soon. 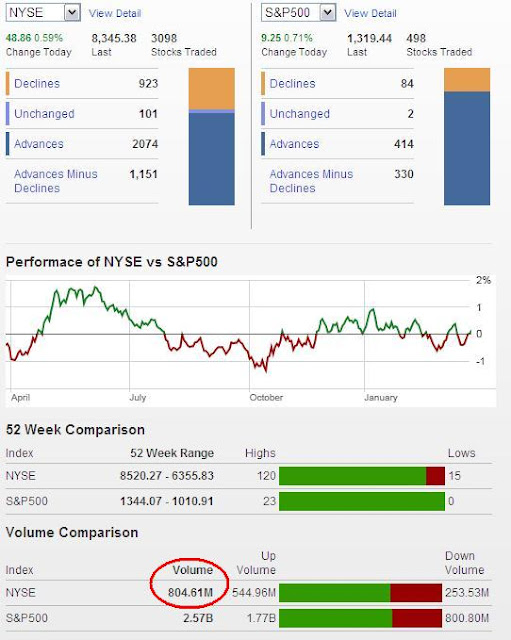 Internals today tell us that this market is still flip-flopping around with an upward bias on light volume. Today’s volume was greater than yesterday’s, but still very light overall at only 804 million NYSE shares traded today. Once volume comes back into the market, we should have more confidence in riding a trend for a few days at least. 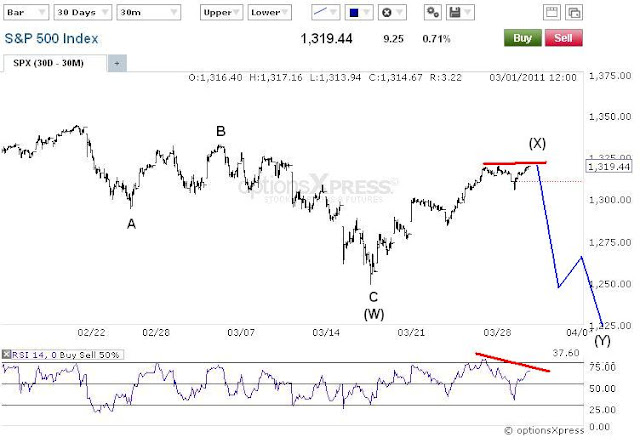 The S&P is not only moving higher on low volume, but also on diverging relative strength as seen through the RSI above. This paints another picture of weak momentum on this move higher. But, the market can still float higher on this weak momentum just as it has done the past several days, but if we get a big volume spike on a nice reversal day to the downside, or accompanied with an impulsive decline, then I think it will be a golden opportunity for nice short trade. So I’m still waiting and watching for the next big move on high volume. 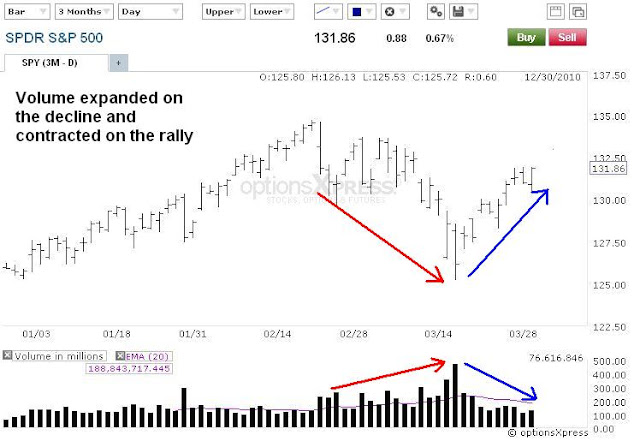 If we put EWP aside for a moment and just look at the behavior of volume lately we can see what should be a concerning picture for the bulls. Above is the S&P SPDR the SPY. Notice how volume increased with the SPY’s decline, then fell off sharply when the market rallied. This tells me it’s probable that the larger trend is probably still down despite this long rally we’ve had the past couple weeks. So this is one of the things I’m watching that has me all over this volume issue. 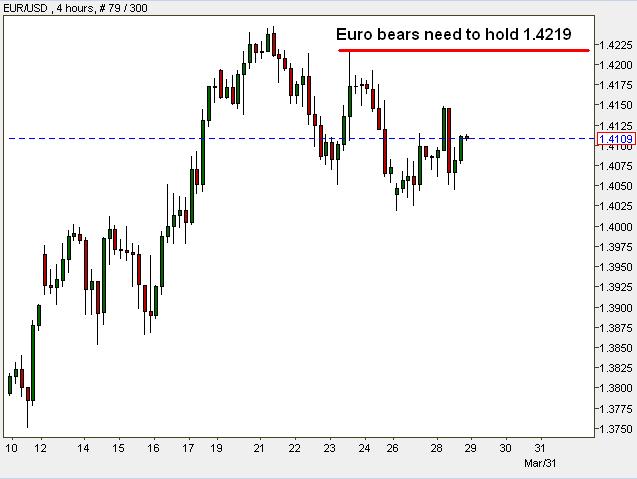 The euro hasn’t done much all this week. I think the risk/reward lies with the bears here so I’d be short against 1.4219. At this point, a break above 1.4219 would make the decline from the highs on this chart a 3 wave move which is a correction, and point to higher levels for the foreseeable future. So staying below 1.4219 keeps the bearish view intact with substantial rewards possible if the larger downtrend has in fact resumed.

Still No Volume, But is Today's Reversal in Stocks Significant? 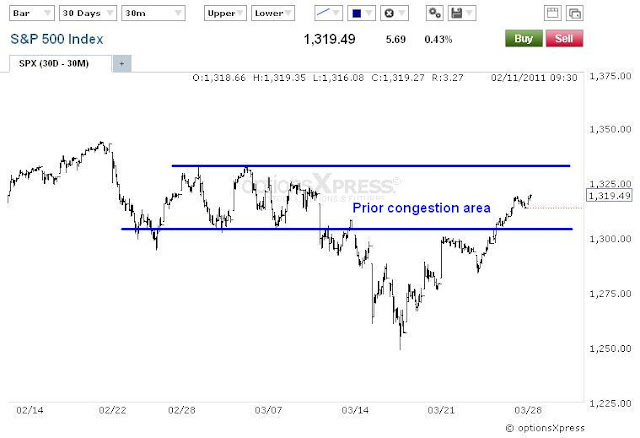 Friday's upday was accompanied by even lighter volume than the previous light volume day.  I think it was around 820 million NYSE shares Friday.  But the bears have not taken advantage of the thin bearish momentum and the market continues higher.  This is not the behavior I'd expect to see at a major trend change.  And with the S&P gap filled I would have liked to see a reversal quite soon, but it's not happening.  This is why I put the WXY combination count as top choice late last week.  I can still eye the WXY combination correction with the market being in the X wave right now, but with the series of higher highs and higher lows well intact, there's no reason to get short here in my view.  Although momentum is hallow, it's still up.  Until that uptrend is broken, I'm on the sidelines.  The market is in the middle of a prior congestion zone so it may staul a bit here.  It's reaction off the congestion zone will be important.  And whichever way the market moves when volume re-enters the market should define the trend for the next several days.

The euro looks like it might be starting an impulsive decline but it's too early to confirm it.  Looking for short opportunities in the euro, and long the USD, seems like a wise choice here. 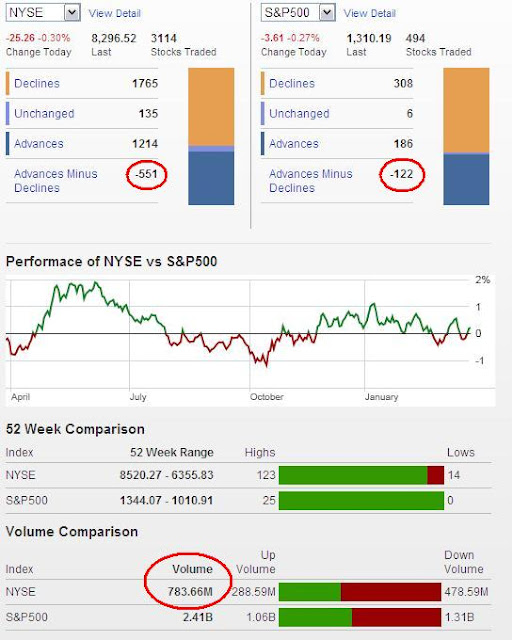 Today we had a nice stock reversal at the end of the trading day which was really nice to see since the S&P is trading at the heart of a congestion area I'd like to see hold as resistance, and shortly after filling a gap at 1320.  You can see the internals above show a bearishly slanted market by the advancers vs decliners and up vs down volume despite the fact the market was in the positive most of the day.  The biggest problem here though is volume.  There was none today.  The NYSE had only 783 million shares traded, even lower than Friday's number.  So volume continues to decline every day.  So I don't have much confidence in this late day reversal......yet.

Like I've said before, the key is to watch for volume to enter the market again.  Whichever way the market moves on high volume (preferably over 1.1 billion NYSE shares at least) should define the trend for the coming days. 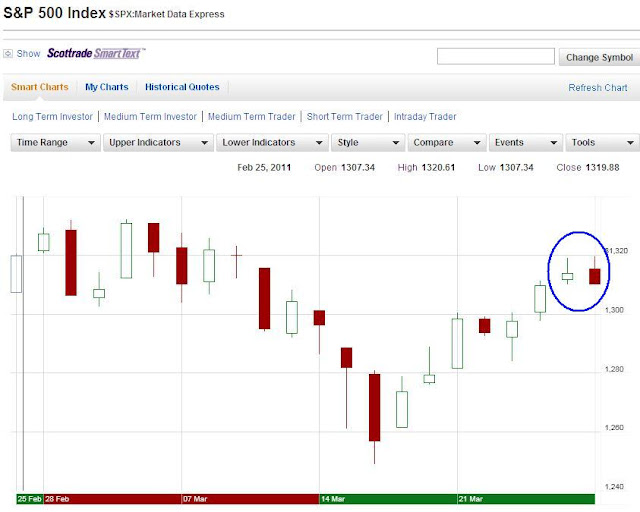 The daily S&P chart shows a nice reversal pattern in the candlesticks.  But unfortunately since there was no volume to support for this formation, it makes it less reliable.  It doesn't mean we should ignore the signs of today's reversal, we just need to be cautious if going short here.  I personally am waiting for volume to return, or a clear 5 wave decline before I get short stocks.

The euro didn't do much today to report on.  It looks like it may have formed a significant top and has completed the early stages of a large impulsive decline.  I'll post a chart with a count when I have high confidence in its labeling.  But I'd still favor the short side on short term trades here.