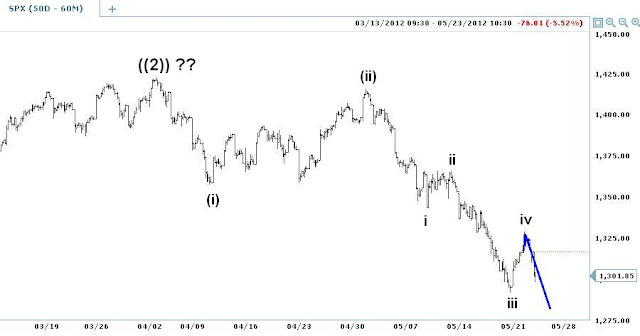 The S&P has followed my previous forecast almost exactly.  It popped a little higher for wave iv, and is now collapsing in wave v.  I expect a move toward the 1275 area before a meaningful rally occurs.  But that's not to say it won't continue lower.  The larger trend is down, so surprises will be to the downside.  I will not get long at 1275, but it will just be an area to watch to protect my short position. 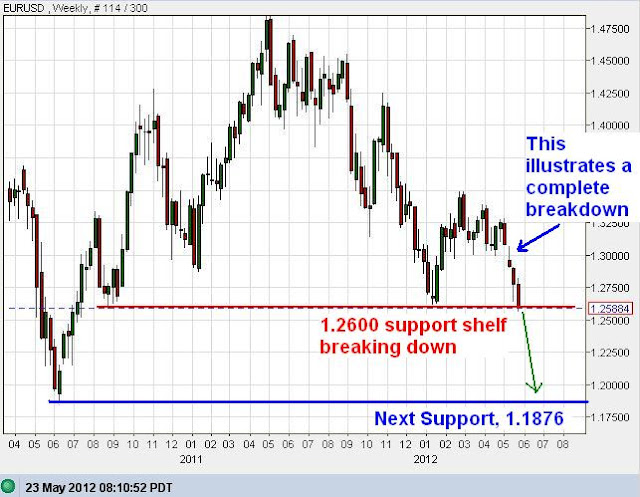 The EUR/USD has also followed my forecast for a move to the 1.2600 level.  The breakaway action and fierce selling shown on the above weekly chart is very bearish for the euro.  This decline could really pick up steam and shoot toward 1.1876 support very fast.  And that's a long ways away with a lot of pips for the bears to gobble up.  I remain short.

14 Elliott Wave Trading Insights You Can Use Now 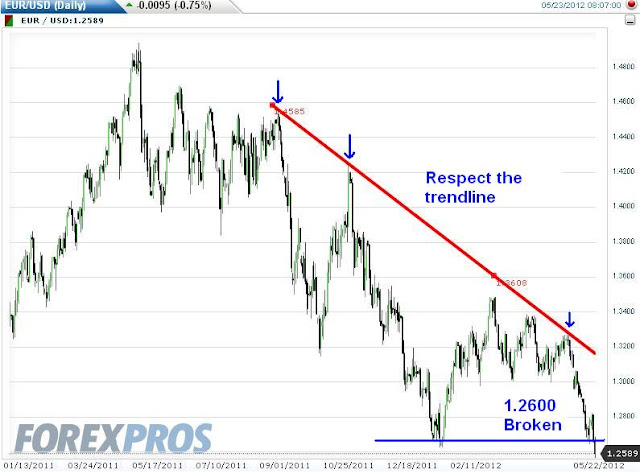 Keeping an eye on the shorter term daily chart, you can see a clear descending trendline has been respected by the euro a handful of times.  I expect that trendline to remain intact during the euro's decline.  With 1.2600 breaking down, there is not much holding up the EUR/USD before it gets to 1.1876.  Watch the trendline, and watch the swing highs.  As long as the daily swing highs and the above descending trendline remain intact, I'm firmly bearish the euro.

How a Simple Line Can Improve Your Trading Success

PLEASE NOTE: THIS IS JUST AN ANALYSIS BLOG AND IN NO WAY GUARANTEES OR IMPLIES ANY PROFIT OR GAIN. THE DATA HERE IS MERELY AN EXPRESSED OPINION. TRADE AT YOUR OWN RISK.
9 comments: 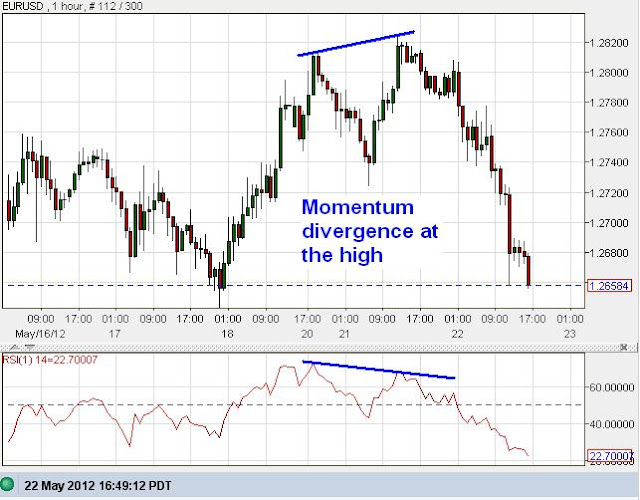 The hourly EUR/USD chart shows a bearish divergence between price and the RSI at the recent high.  The big selloff immediately afterward confirms the divergence which signals a top is in place.  The outlook for the euro moving forward is very bearish.

How a Simple Line Can Improve Your Trading Success
﻿ 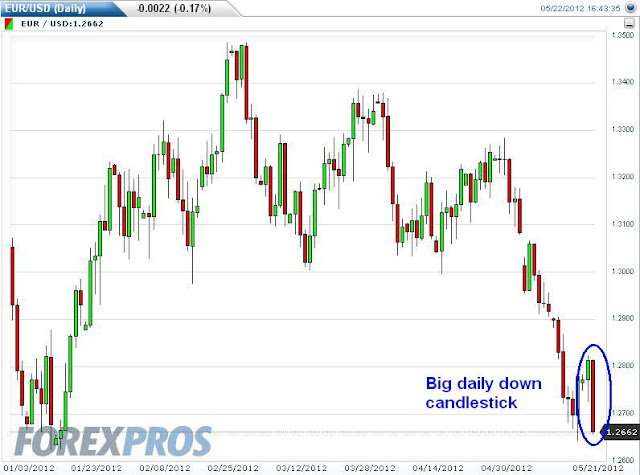 Today's big bearish candlestick in the euro signals the larger downtrend has resumed as long as today's losses are not completely reversed tomorrow.  I was cautious on the rally before since it was so oversold prior to that, and the reversal higher looked like it might have legs and run higher for a while.  Now it looks like the euro is headed lower in the short term, although it's probably a wave 5 at some degree so I would still be mildly cautious and not be too aggressively short at the moment.  The daily charts are showing a bullish divergence building, but it might not materialize in a sustained rally for quite a long time.  Regardless, the short term is bearish so I added short near 1.2700, but not nearly a full position.  I still have plenty of cash to add short if it rallies from here.  Any rally should be capped shy of 1.2824. 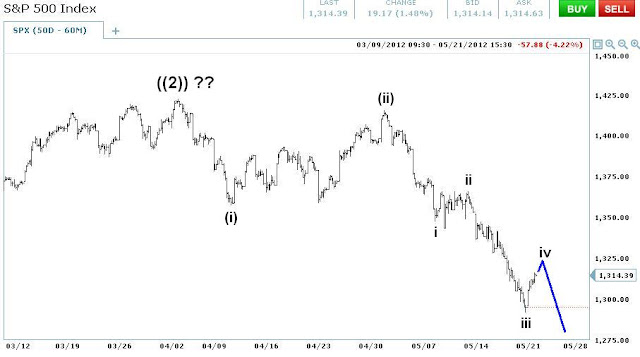 Stocks continued lower as expected, but have bounced a little lately in what is probably a small wave iv.  Once complete, further selling to a new low will be achieved, probably toward the 1275 area at a minimum.  The current rally seems to be just alleviating some of the severe oversold condition the market is in.  I see nothing about this move that signals a significant bottom is in and that a new rally phase is underway. 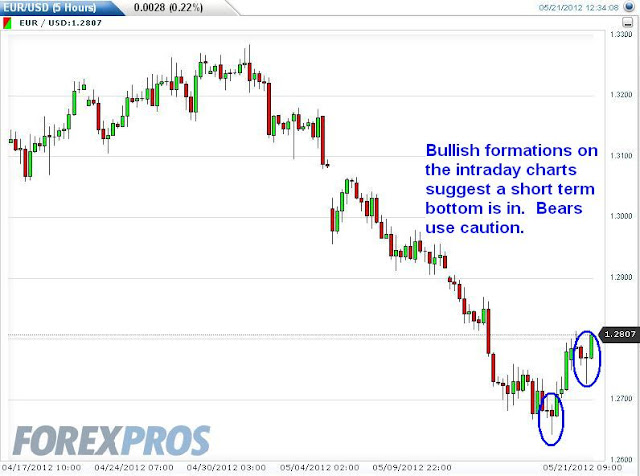 Looking at the 5 hour chart you can see two bullish candlestick formations suggesting the bears have run out of gas and that there is solid buying pressure keeping the euro afloat right now.  Right now there are only 3 waves higher, which is a correction.  This could mean that this rally will be short lived.  But I doubt it.  The euro has a bullish divergence with momentum indicators on the intraday charts, and overall was just deeply oversold.  So I would expect the euro to subdivide higher in a 5 wave move, which means the rally will be much higher where we need to look toward previous open gaps for resistance levels.  So euro bears beware here.

The Manic-Depressive Stock Market: What to Make of It 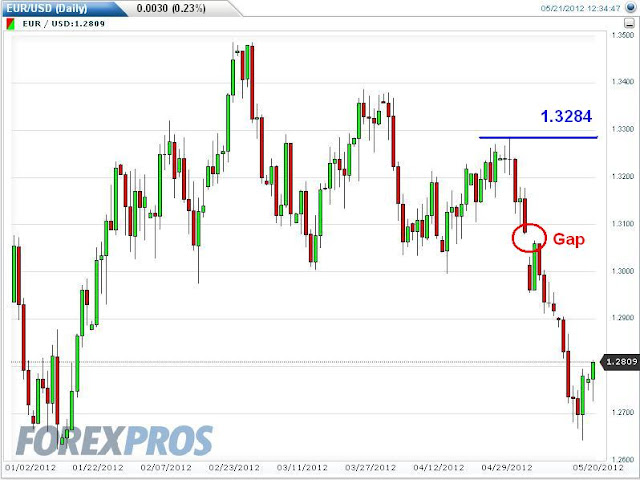 On the daily EUR/USD chart you can see the massive topping pattern around the 1.3300-1.3400 that has taken place over the past several months.  This top and reversal doesn't look like a small hiccup, it looks the start of a major down-move well below 1.2600.  So the short term may look bullish, but the long term looks bearish for the euro.  There is a big open gap just below 1.3100, so if the current rally has some strength to it, we may see prices rise toward that level.  There's no guarantee though, and I am not looking to get long.  I merely lightened up my short position and will be looking for signs of weakness to put those short positions back on.  The rally should be capped below 1.3284.


PLEASE NOTE: THIS IS JUST AN ANALYSIS BLOG AND IN NO WAY GUARANTEES OR IMPLIES ANY PROFIT OR GAIN. THE DATA HERE IS MERELY AN EXPRESSED OPINION. TRADE AT YOUR OWN RISK.
1 comment:
Newer Posts Older Posts Home
Subscribe to: Posts (Atom)