Internals today were fairly bearish yet volume was still quite light at only 1.09 billion shares traded on the NYSE.  Down volume had quite an edge today vs. up volume on the NYSE, and decliners well outpaced advancers on both the NYSE and the S&P.  Yet the price decline was relatively tame, and the market just floated sideways most of the day before a mild rally into the close.  So to me, the market movement from yesterday and today smells like just a small 4th wave, and one more new high should occur before a sharp and noticable reversal. 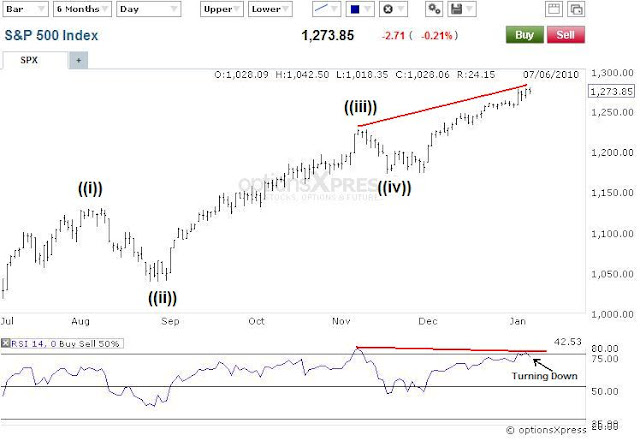 The RSI divergence is still in place on the daily S&P chart, and today's down close resulted in the RSI turning down from overbought territory as well.  A new intraday high and reversal tomorrow would be a nice development for the bears.  It would result in yet another unconfirmed high in price, while momentum (RSI) fails to confirm it and probably continues to drop down, and further develop the larger divergence established at the November high.  The big employment number comes out tomorrow, so perhaps we'll get that pop and reversal to the downside.  If I see a big sharp rally tomorrow morning, I will probably fade it (short into it) for a short term trade.  A big reversal should occur any day now, but I'm still waiting for a good opportunity to enter.  I don't like enter a speculative trade at a reversal point right before going into the weekend, but a sharp morning rally will beg that I at least attempt a short term short position with well controlled risk. 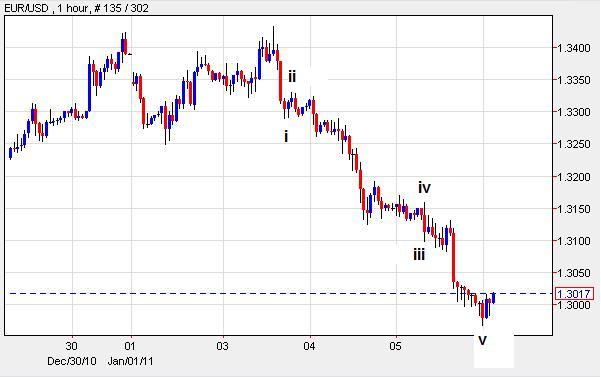 The euro continues its decline and the US dollar continues its rally.  Today's decline to new lows made the entire decline this week look like a nice impulsive move, suggesting that the larger downtrend has resumed.  With 5 waves down possibly complete, a corrective rally may occur soon that remains well shy of getting above 1.3433.  With a nice 5 wave decline on our hands, I'm firmly bearish as long as it trades below 1.3433.  And a break below 1.2968 will open the door to an almost certain test of 1.2600 soon after. 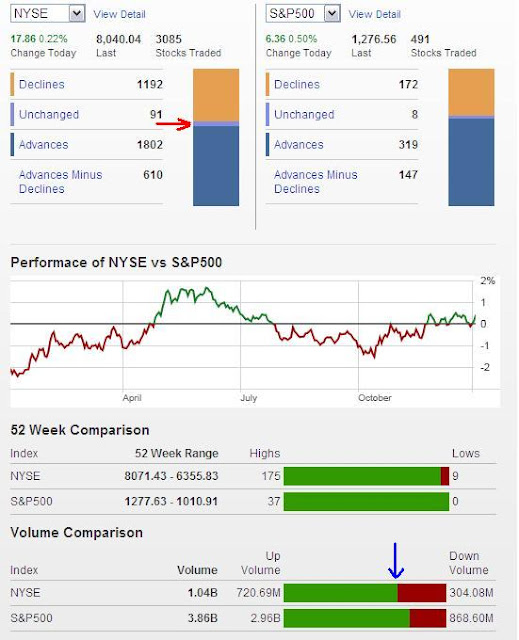 So Scottrade modernized their data and charts so we have to adjust and get used to this new style here for the internals.  Volume was fairly light today on the NYSE with just over 1 billion shares traded, but what’s really of note here is the large amount of up volume compared to down volume along with the solid amount of advancers to decliners.  The Nasdaqs and small cap indices made some real nice gains today after slacking a bit yesterday, suggesting this market isn’t quite done running higher for the moment.  I expect more floating to the upside in the short term. Nothing’s really changed from yesterday in the wave count or momentum picture.  As of right now, the RSI is diverging from the newest highs in price on the S&P.  This is typical 5th wave behavior, so the count I have labeled remains likely, at least at the Minute degree.  I see no signs of a reversal or top here, in fact it appears we still need some sideways or mild declining before we get at least one more last small surge to new highs to complete the smaller degree wave pattern.  So a float higher in the short term still seems to be the likely scenario from here.
Learn Elliott Wave Principle 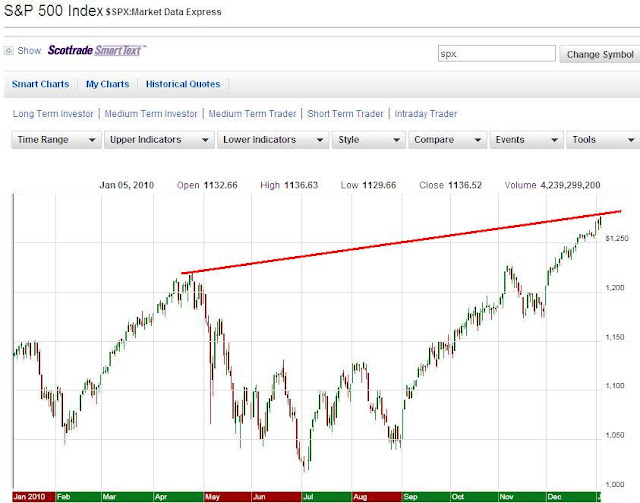 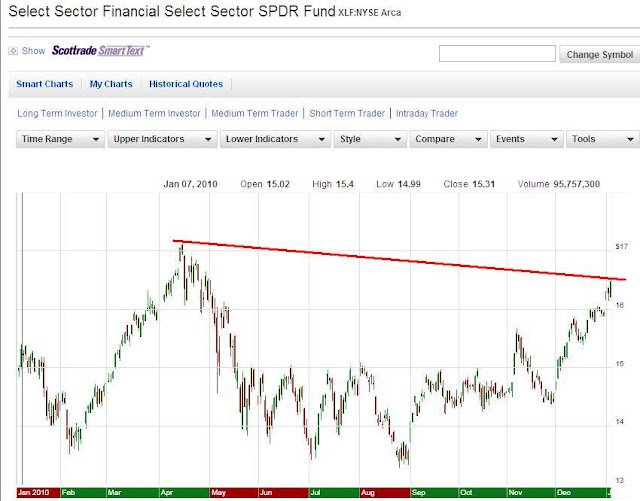 The XLF has been making strong gains the past few weeks, along with stocks.  But it still remains shy of its April 2010 high while the stock market has well exceed that high.  So a slight divergence is in play here.  A turn lower in the stock market real soon would confirm this divergence and suggest a larger decline was underway, perhaps the 100 point S&P decline I mentioned yesterday.
So for stocks, I’m still waiting.  I don’t see a desirable risk/reward ratio on the bullish side right now, yet I see no signs of a top and reversal for the bears either.  So I have to just sit and wait patiently for an opportunity to present itself.  And I’m looking mainly for shorting opportunities at the moment.
Keep Ahead of the Herd in 2011
Learn to Survive and Thrive with Knowledge of Socionomics and the Elliott Wave Principle 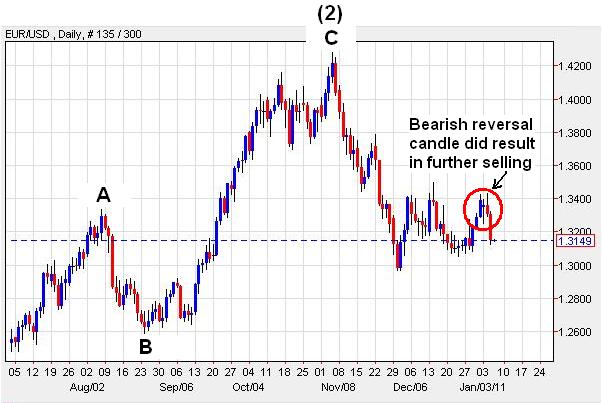 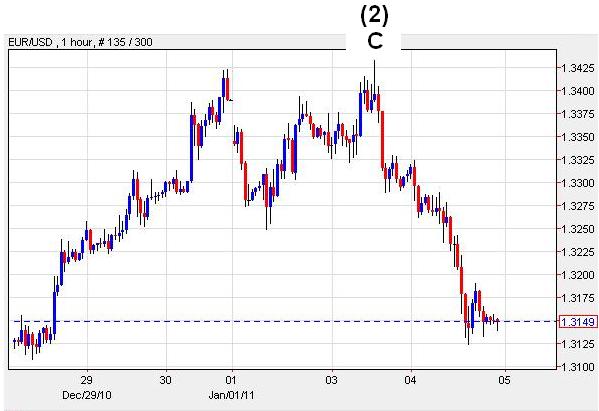 The euro declined nicely as I thought it would after seeing that daily reversal candle yesterday.  The wave count from the Primary wave C high is still unclear but there is no reason to abandon the bearish view right now in my opinion.  Rallies have a tough time sustaining themselves, and the euro is trading very heavy overall.  I remain cautiously bearish the euro and bullish the US dollar.  A break below 1.2968 EUR/USD will open the door for a test of 1.2600 soon after.

Get Up to Speed on Robert Prechter's Latest Perspective — Download this Special FREE Report Now.


PLEASE NOTE: THIS IS JUST AN ANALYSIS BLOG AND IN NO WAY GUARANTEES OR IMPLIES ANY PROFIT OR GAIN. THE DATA HERE IS MERELY AN EXPRESSED OPINION. TRADE AT YOUR OWN RISK
No comments:

I hope everyone had a good holiday season and is ready to make 2011 the best trading year for wavers since 2008.  I’m finally back up and running with full internet access so postings should be back on regular schedule now.
The markets did pretty much what I suspected they would do during the holiday lull in that they just floated higher on light volume.  The first day of the year resulted in an exuberant rally as it seems investors feel the market’s outlook for 2011 couldn’t be peachier.  I had a conversation with some folks last week who are not too financial market savvy and they told me I better buy stocks now because 2011 is shaping up to be a great year for stocks and the economy.  I told them I’d think about it.  But the only thing I was thinking about was how fast I could get back to the internet to place a short trade after hearing that.  I didn’t short anything, but the point is that I feel the optimism seeping threw every aspect of my life all the way to some of my friends who barely know anything about the financial markets, yet feel so bold in their outlook that they offer financial advice to anyone who will listen.  This optimism is ripe to be picked and squashed by the bears.

Internals today were slightly bearish on moderate volume, nothing stands out at me here. 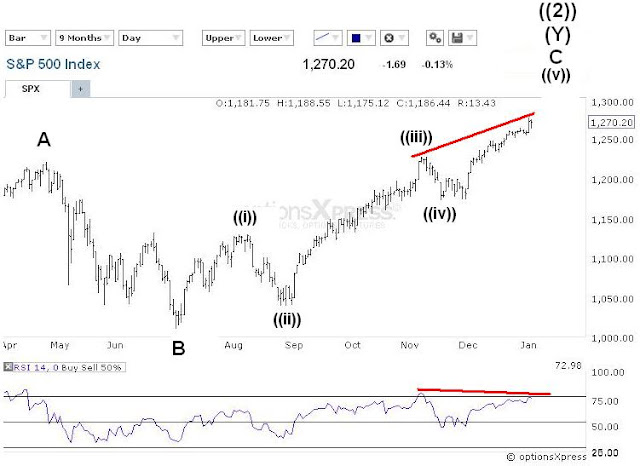 I’m expecting around a 100 point S&P decline to come quite early in the new year.  This will take us to the bottom of Minute wave ((iv)), a typical retracement level for corrections.  But if Primary wave ((2)) is complete, then it will be more than a retracement, and the market will soar right through that level without any problem.  The wave count and momentum divergence supports this view.
There is a quite clear 5 wave rally off the Minor wave B low at the 1000 level in the S&P.  Whether this is part of a larger uptrend, or the end of one, is irrelevant in the short term in my opinion.  The bottom line is that either way, a pullback is coming.  Although I wouldn’t be pounding the short side just yet since I see no solid evidence of a top and reversal, I also would not be in a position to get caught long in an illiquid, or unprotected, position either.  Plus, it seems very possible that we may push higher for a week or so to the 1300 level as all the “Average Joe’s” buy into the media hype about how great 2011 will be, which should be the perfect time to pull the rug out from under them and drop this market off a cliff.  So I think patience is warranted here for the short term players.
Once I see something definitive, like a solid 5 wave drop on heavy volume to new swing lows on the intraday charts, then I’ll post it here.  Until then, I’m sitting this out. 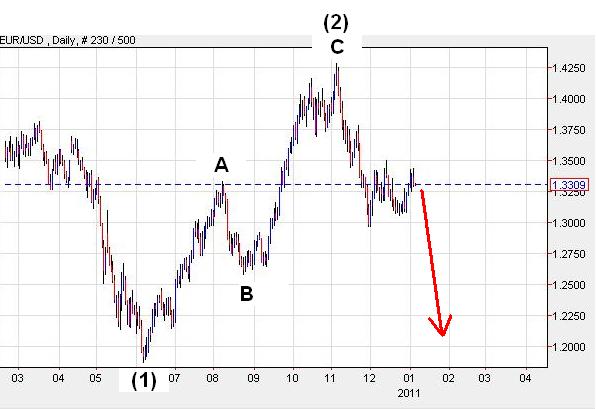 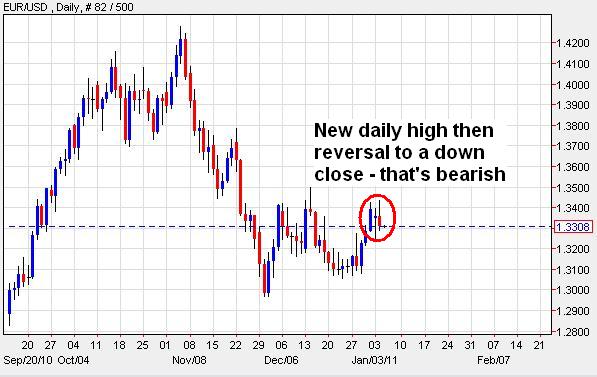 The euro’s short term wave structure has not been clear lately.  Oftentimes when this happens it means the messy movement is just part of a correction.  So I’m cautiously bearish here.  So far, we only have 3 waves down from Minor wave C high around 1.4250, which doesn’t allow us to confirm the larger downtrend has resumed.  However, the euro has had a lot of trouble mounting any type of rally the past few weeks, and today marks a nice bearish reversal pattern.  So staying short still seems wise to me.  As long as today’s high remains intact, I think aggressive bears have the best play here.

Get Up to Speed on Robert Prechter's Latest Perspective — Download this Special FREE Report Now.
PLEASE NOTE: THIS IS JUST AN ANALYSIS BLOG AND IN NO WAY GUARANTEES OR IMPLIES ANY PROFIT OR GAIN. THE DATA HERE IS MERELY AN EXPRESSED OPINION. TRADE AT YOUR OWN RISK.
1 comment: