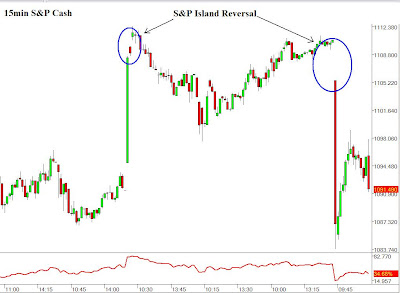 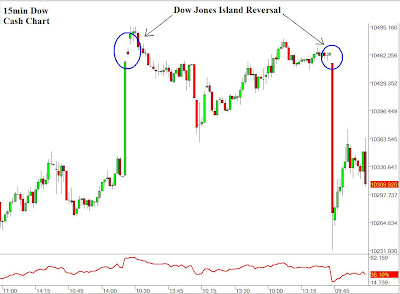 Thanks to blog reader, JD, for pointing out that today's gap down in the stock market leaves a bearish island reversal in place right now (click here for JD's comments). As you can see from the attached S&P and Dow charts, the up gap from Monday was followed by a down gap today which is a classic reversal pattern from the previous trend. This is just more evidence of a short term top forming; and when combined with the longer term evidence it suggests that perhaps a major top is already in the stock market.

Thanks a lot JD for sharing that insight with us!
6 comments: 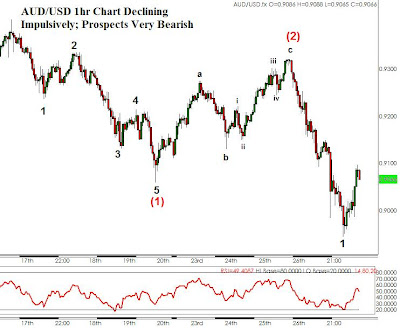 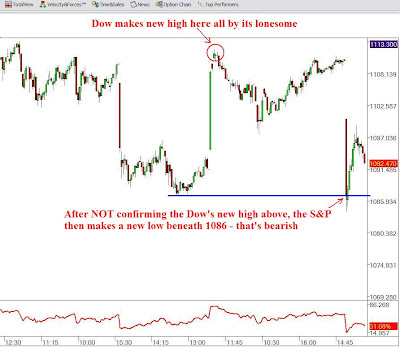 I hope everyone who celebrated Thanksgiving had a great holiday with family and friends and got as full as I did on great food and wine last night :)

Well I said I wouldn't post anything unless something significant happened and that's exactly what occurred. A state run firm in Dubai essentially is defaulting on a big debt. Just a small taste of what's to come as wave 3 or C takes effect and ravages these markets. However, despite Asia and Europe selling off over 3% in some indices, the US market has spent the entire morning rallying since the big down open. I'm not surprised. With the very light volume and the US taking the latter end of the week off, I don't want to read too much into the action because things tend to get wild when Wall Street is gone on holiday. However that doesn't mean we should sweep under the rug the action that's occuring.

First, the AUD/USD (Australian Dollar/US Dollar) declined in a nice 5 wave pattern which I showed in a previous post (see post here). Thanks to Elliott Wave International's Short Term Update and FXCM curreny analysts for bringing this count to light. The pair rallied to one more new high above where I previous projected and has since declined sharply in an impulsive manner to a new low. See attached AUD/USD chart illustrating this. It appears the pair is a large wave (3), which is bullish for the US dollar. The EUR/USD is also reversing Wednesday's big gains, but the AUD/USD count is much clearer so I'll be following that a little more closely. Again, a dollar bottom and rally will be extremely bearish for the stock market. (a bullish dollar move would equate to AUD/USD and EUR/USD declines).

Also notice on the attached S&P cash chart that earlier in the week the Dow eeked out a new daily high essentially all by itself, creating a bearish non-confirmation. The same type of non-confirmations occurred in several other indices on larger timeframes as well. Then the S&P declined beneath the previous swing low at 1086, solidifying the bearish non-confirmation with the Dow. This action is very bearish.

Monday's have been notoriously bullish the past several weeks and this is also when a lot of investors/traders will re-enter the market from the holiday to sort out the action from this week. So the beginning of next week will be more telling of the short term structure than this week. The action this week is overwhelmingly bearish if the 1114 level on the S&P continues to hold, and it keeps me short term bearish as well.

Also, we had some good comments to my last post by Rob and Gustavo, so feel free to check them out (click here) and offer comments, questions and insights if you'd like. Thanks as always guys for posting good insightful stuff to help us all get an edge on the markets!

Snoozefest in the Market Today 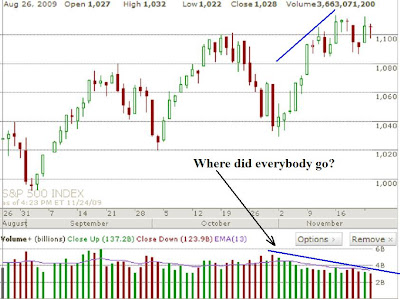 Just a brief holiday week update. Nothing spectacular in today's market snoozefest. I don't want to read too much into any signals or indicators right now with such light volume, but the one thing of interest includes this week's and prior week's data. Volume has fallen off a cliff. Look at the daily S&P cash chart on the past rally phase since early November. That huge rally was done on declining volume, falling significantly short of the 13 day moving average through most of the rally. Combine this with the Dow making a new 13 month high yesterday while virtually no other index or sector followed suit, you have a fractured and weak market. That doesn't mean the market has topped and will roll over immdiately. But with this kind of behavior after the market has rallied 50%+ since March this year, it's certainly not a time to start getting long, in my opinion.

With light volumes over the holiday week I can't say much of anything with a strong level of certainty, but I do still hold the short term bearish view from last week as long as the S&P cash trades under 1114.

I don't want to get all preachy but I do want to share something that's important at this juncture in the market and the year that I've learned while trading the markets. As the holidays approach it's good to always keep the markets in perspective and realize that its behavior and our portfolios pale in comparison to the importance of good family, friends and health. Enjoy as much as you can with them as the holidays approach, and remember that the market is just a game, and that true happiness will ALWAYS result from relationships we build with our family and friends, not the market. Tomorrow is a heavy news day so we may get something worth reporting. If not, I probably won't be back until the weekend or Monday. 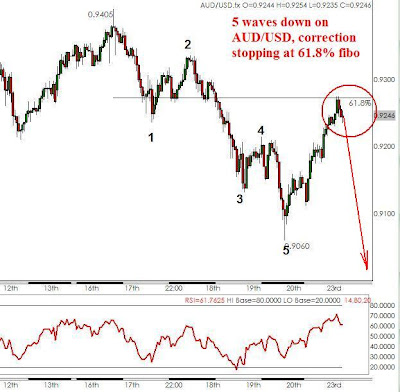 The market surged this morning as has been the case with recent Mondays as of late. A CNBC FastMoney trader has been saying that Monday's rallies have been due to Money Managers having available funds at that time and doing all their buying. Today was no exception. The financial news wires said the rally was on some housing data that came out this morning, but the EUR/USD rallied all throughout the Asian and European sessions before the housing data even came out this morning, signaling a big rally in the stock market was going to occur this morning anyway. So as usual, the "news of the day" has very little to do with market movement despite what the financial news folks say. EWP states that crowd psychology and the wave structure create the news, not the other way around. Today is a good example of that at work.

Internals are very strong this morning, suggesting only buyers in play today. It's a holiday week so volumes will most likely be light, perhaps giving the bulls an opportunity to rally this market big all week. The key will be to see what happens when volume returns. The last few times big volume re-entered the market, it resulted in selloffs. Today the Dow made a new daily high while virtually every other index did not. Again, as this market shoots higher, watch the behavior of the Dow compared to the other secondary indices and sectors. And keep in mind my post on the significance of this "fracturing" occuring right now that's causing the Dow to outperform everything else (see post here). I'm short term bearish as long as the non-confirmation between the Dow and S&P remain intact which means the S&P needs to continue to stay beneath 1114, however I have low confidence that will hold at this point.

An interesting structure and opportunity exists in the AUD/USD. Elliott Wave International and FXCM analysts have pointed out the clear 5 wave decline in the australian dollar/US dollar (AUD/USD). The pair has rallied to the 61.8% fibonacci level which presents a great opportunity for the bears to get short at current levels (0.9253) with a stop above 0.9410.

I'm visiting family and friends this week so I won't be posting much this week other than significant develops that unfold as I see them. Have a great holiday week everyone!


PLEASE NOTE: THIS IS JUST AN ANALYSIS BLOG AND IN NO WAY GUARANTEES OR IMPLIES ANY PROFIT OR GAIN. THE DATA HERE IS MERELY AN EXPRESSED OPINION. TRADE AT YOUR OWN RISK.
4 comments:
Newer Posts Older Posts Home
Subscribe to: Posts (Atom)