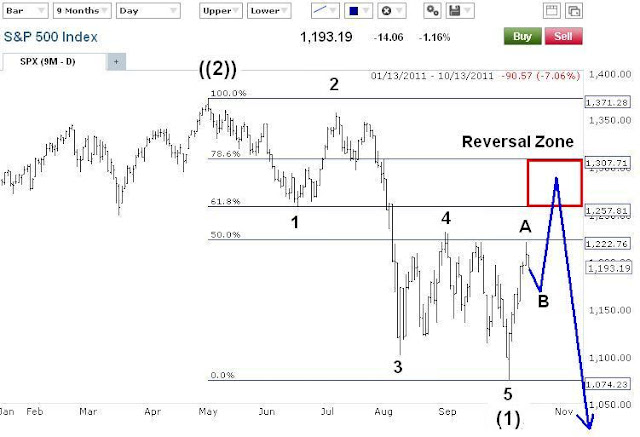 Stocks have continued higher in Intermediate wave (2) as I've been talking about the past several days.  Nothing new has developed this week to change tjos outlook so I haven't posted anything.  But today's pullback may signal that Minor wave B down has started.  I want to be clear though, I am not a firm believer in trying to dial down corrections to predict every little move as if it were a mathematically and scientifically calculated certainty.  EWP, like all technical analysis, is all about probabilities.  And with several different corrective forms Intermediate wave (2) can take on, and many of them so different from each other, trying to project the wave structure would still produce low probability trades.  My opinion.  With that said, I'm merely tracking it in the above chart with an educated guess.  I usually start counting my corrections as the simplist form, a zig-zag, and then make them more complex as the market demands.  I am neutral on stocks right now and have no positions in equities at the moment.

Bottome line: stocks were repelled at a prior swing high as well as 50% fibonacci retracement right now.  I believe this is only a temporary barrier, with the current decline possibly being the start of Minor wave B.  Once Minor B is over, Minor C higher will be in full force, a strong 3rd wave surge into my reversal zone labeled above.  Once Minor wave C is complete, Intermediate wave (2) might be complete, and then disaster should strike for stocks with a large and very destructive Intermediate wave (3). 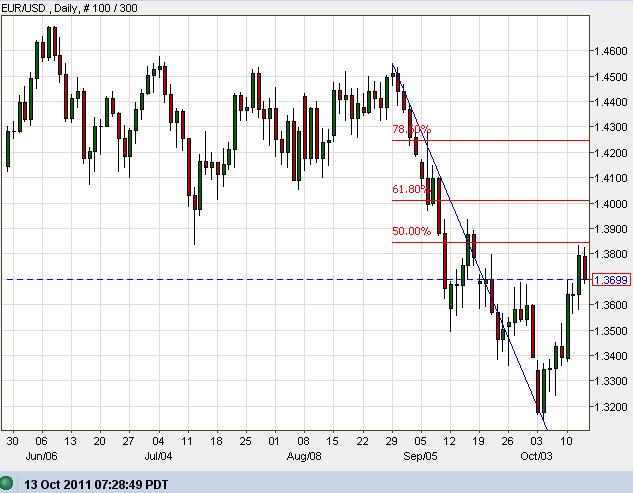 I'm uncertain of the wave count in the euro since it started so choppy and with a lot of 3 wave moves around the high.  So I'm using basic technical analysis, and monitoring stocks in correlation to the euro since they tend to move parallel more or less.  You'll notice here that the euro is also trading at, and having trouble at, the 50% fibonacci retracement level.  Although, keep in mind I'm not using my fibonacci measurement equal to stocks since the euro's fibonacci does not start at the high on the chart.  The reason I'm not starting it at the high in the euro is because it doesn't look like a full 5 waves down from the high, so the next best thing is to measure the length of the sharp decline itself and count the retracement from that only.  Needless to say, the euro is not painting a clear picture here so I don't want to trade it.  But when stocks top in Intermediate wave (2) I will be looking to short the euro along with stocks despite the euro's lack of clarity. 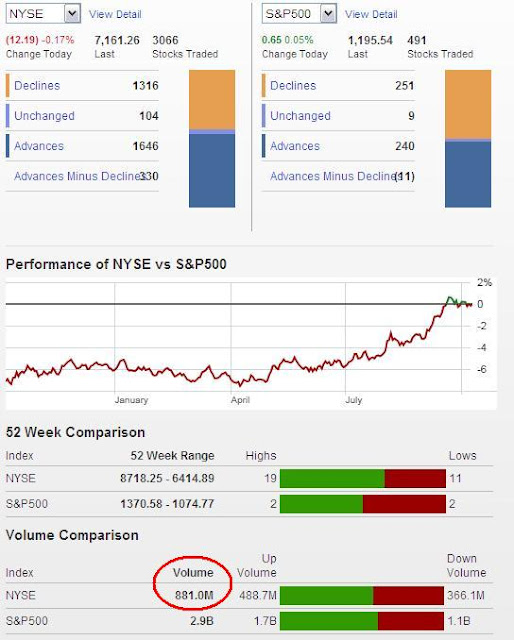 Stocks have been moving firmly higher the past few days leading into today's split market.  Volume was real light again at 881 million shares on the NYSE, but that should be expected since this rally is part of a larger Intermediate wave (2).  Today's volume with the fractured market MAY mean the rally is taking a break.  Regardless, the larger trend looks to be up over the next few weeks. 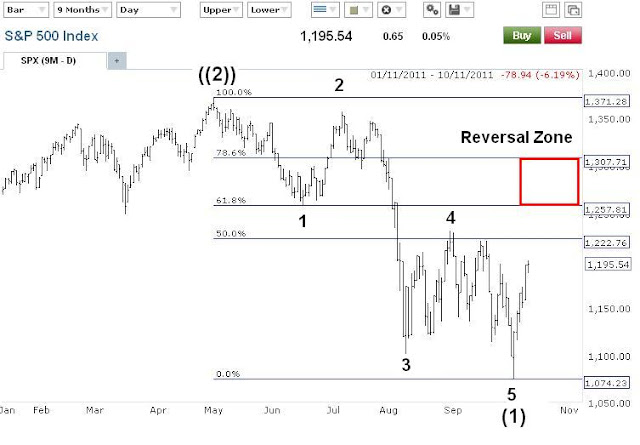 With 1195.86 broken it appears that Intermediate wave (1) is complete, and now the larger trend has turned up.  And Intermediate wave (2) up seems far from over.  It can take the shape of several different EWP corrective formations, all of which can be difficult to project and trade.  2nd waves tend to be deep and sharp and make one feel that new highs are on the way as if the previous uptrend is back in force.  It's at that point when everyone feels the worst is over and when the bottom falls out for wave 3.  It doesn't appear we are at that level yet at all.  So I expect higher levels.

Looking at fibonacci retracement and resistance levels we can get an idea of where Intermediate wave (2) might reverse.  2nd waves tend to get to the 61% and 78% fibonacci levels before ending.The 61% level around 1258 looks like a good area to give the market some trouble since it's where Minor wave 1 ended, it's just above the previous 4th wave which is where a lot of corrections end, and it's a 61% fibonacci retracement level.  With that hard resistance in place, I would think the market will have a tough time getting through that area without a major upswing in volume and intensity.  But then it will have the 78% fibonacci level to contend with at 1308 which is also a prior congestion area over the past several months.

So, in summary, the market appears to be in an uptrend for at least the next few weeks.  There will be pullbacks along the way, but overall, the trend looks up and I'm looking at the 1258-1307 area as a good reversal zone for Intermediate wave (2).

The euro has bottomed along with stocks and should continue higher with stocks.   I don't see any good opportunities in the euro right now, but when I see one I'll announce my thoughts on it.