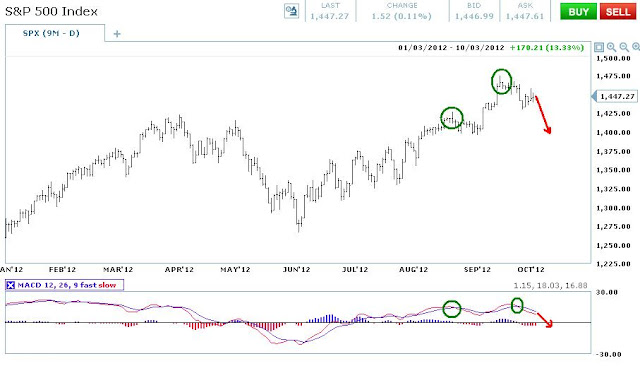 Since my last post, stocks have pulled back modestly, but there is no 5 wave decline yet so it's tough to call a top here.  Using the simplist of momentum indicators, the MACD has a double top and the averages are trending down, suggesting at least the short term should result in further stock weakness.  Until we get a 5 wave move, it's tough to make a call either way here.  But the sum of the evidence seems to favor the bearish side slightly since the gains over the past few months seem extended, the VIX is extremely low, and two topping price bars have been put in place on the daily chart. 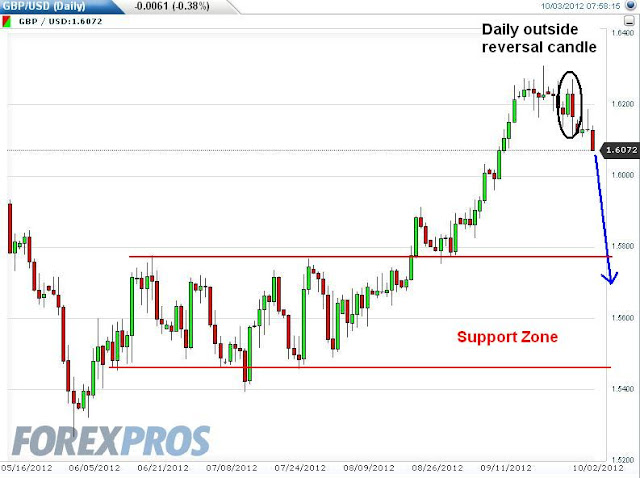 I normally focus on the euro and not the other majors, but the euro is not giving me a clear signal here and the British pound is.  On the daily chart you can see a big outside reversal candle followed by daily candles with long top-wicks suggesting a lot of selling pressure.  Today the pound has faltered so far suggesting the bears are taking control.  Now I know the outside reversal candle did not occur at the absolute top so some people may disagree with me here.  But with all the selling pressure coming in after the formation, it's close enough to the top for me to get me to short.  I'm short the euro and the pound right now since the evidence supports that a US dollar bottom has occurred which should put pressure on these european currencies.  A 5 wave decline soon, in either the euro or the pound, would be welcomed even more.

PLEASE NOTE: THIS IS JUST AN ANALYSIS BLOG AND IN NO WAY GUARANTEES OR IMPLIES ANY PROFIT OR GAIN. THE DATA HERE IS MERELY AN EXPRESSED OPINION. TRADE AT YOUR OWN RISK.
5 comments:
Newer Posts Older Posts Home
Subscribe to: Posts (Atom)